Feel free to oust me from the fandom or call me a heathen or unite all the Paulkins and John/Xander shippers against me but I would like to propose a new ship:

Just putting it out there. MacNamara does canonically ask Paul out for coffee.

The lovely group chat asked for GAY Goldstein (Attorney at law) so I gave him a rainbow tie.

#gary goldstein, #gary goldstein attorney at law, #Black Friday, #starkid, #starkidcomix, #my shitty art, #we stan a gay icon /s, #Bats I think it was you who fucked up his name yeah? thx girl xx, #this is quick and shitty but eh, #dialogue from tumblr posts
48 notes · See All
honkyychateauText

aye gang just so y’all know, @graceschasity @fencecollapsed and i have a blog for the au so like!!!!!! if y’all wanna see Extra Content and Updates head on over to @wigglypaulau-official !!!!!!

Um, what? Oh yeah, it’s a new technique, I called it Style Inconsistency 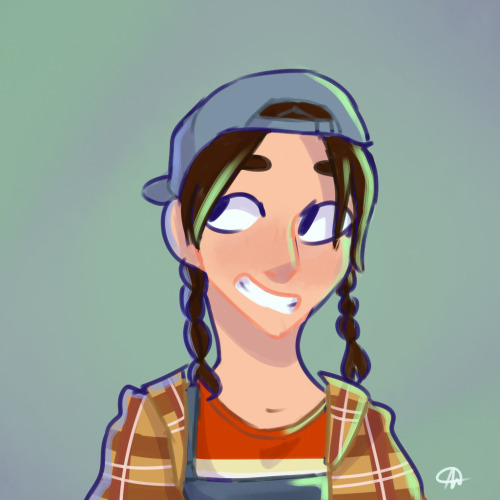 A song I want in Nerdy Prudes Must Die (if it’s the final Hatchetfield show):

A song filled with desperate hope of destroying the thing that’s causing the disasters across the different universes. Something like “From Now On” from The Greatest Showman, but darker. Kinda like “Ok, we’re done with this bs, we know what’s up, time to fuck shit up.”

OO maybe it could use prerecorded scenes that could be put up on a projector, starting out darker, but the stage lights build up! Lights flash onto each actor, having a segment to showcase each character’s versions, showcasing the different timelines of different characters mirroring the actors on stage! (E.g: Lex’s light flashes on as she’s got a few solo lines, the Lex in TGWDLM/BF are mirroring what NPMD Lex is doing.) And as the song progresses, it’s building in intensity to that burst of energy and hope and fear and satisfaction in the final chorus!! I feel like this song has potential to be kinda dance heavy?? When the burst actually happens, we could see some kind of physical stage effect like confetti or streamers or SOMETHING THAT BUILDS THE HYPE AS SOME KIND OF CYMBAL CRASH OR BIG MOMENT as the the projections come over the actors, and fade out, leaving the NPMD versions of the characters, almost in tears because they’ve found hope in something, they’ve made a decision to finally set their lives, and their other timeline lives straight! The song ends with them all in some kind of staggered V formation (it makes sense in my head), with Alice and Deb lets be honest the main characters of the show at the point of the V holding hands, and secondary cast staggered backwards in the V, looking pissed off but also strong and ready to take on whatever eldritch horror is out there. Stage blacks out in an instant. No fade, just black, right on the final note. Which would sound fuckign epic if it was a low note. Like, ok, we’re done waiting for things to fix themselves on their own. This is serious. Time to kill a bitch. Cut to intermission. I now have ideas for the beginning of act 2 but i’ll put that in another post if i ever decide to just ramble on stagung again.

I love staging. this is a mess i apologise.

Hello this is my new baby pupper, Gary Goldstein Attorney-at-Paw

Tom: we don’t illegally download movies. It’s rude to the people who spend millions of dollars making high-quality movies, and we are very honest people.

Lex: plus we don’t know how to

monsters & men and what if tomorrow comes are hitting different now

fandom: the guy who didn’t like musicals, black friday

summary: after emma dies, she starts to see things. set after the events of tgwdlm

Emma was floating. Or, not really floating. Just existing. In some sort of endless void.

Emma felt something trickle down her chin. She wearily touched it, and pulled her fingers away to see a glimmering blue substance on her fingertips.

Ah. So she was basically dead.

“Great,” Emma muttered, shuddering. It wasn’t cold in the void per se, but it still sent chills down her spine. She had a feeling she wasn’t alone.

Emma was seeing things. There was the darkness, but just in front of that, she saw destruction of a familiar small town located on an island. And the destruction of it several times more.

Emma tensed. She couldn’t see Paul, but she didn’t have to. She knew his voice. She would know it anywhere, even as she viewed the visions flashing before her eyes, as she heard it mixed in with the voices of others.

“Yeah,” she said, wiping the blue shit on her shirt. “What are they?” she asked. “Are these all… Hatchetfield?”

A hand rested on Emma’s shoulder. She looked up–sure enough, Paul was there. But it wasn’t the alien-possessed Paul she had seen before she died. It was      Paul    , his actual, human self, his signature look of worry and discomfort on his face. Emma let herself relax under his touch.

“It is,” he said. “As far as I can tell though, they’re not really… the same Hatchetfields.”

Innocent bystanders joining a cult of rabid followers of an eldritch god, or resisting and getting torn apart by them. A bomb descending onto the town, decimating it completely. Emma as the Hive slowly descended on her, ready to make her one of them, with people laughing as if her plight were one big comedic final act. A thousand other possibilities all cramming into her brain, none happy, none hopeful, none ending well.

“It always ends like this?” Emma’s hand drifted up to Paul’s resting on her shoulder and clutched it. “With everyone just dying?”

“In the ones we’ve seen so far.” Paul gripped her hand tighter back. “There could be a single outcome where everything turns out fine, but I haven’t found it.”

“Yeah.” Paul chuckled softly, without amusement. Or maybe a little amusement, at how ridiculous the situation was. Emma sure found it so. Hatchetfield, with no happy ending whatsoever. Hatchetfield, always sure to end in misery and destruction. If you asked Emma, it was fucking absurd. Absurd to the highest degree.

They were in the Black and White, and then, they weren’t.

In the Wiggly Commercial Song, Uncle Wiley sings that Wiggly is “friends with all the elves” and later we get Joey and Lauren as elves in Santa is going to Highschool.

Does this mean that Santa is also an AU that Wiggly already took over or is it a hint at the fact that Wiggly’s greatest allies in Black Friday are two other characters played by Joey and Lauren later on in the musical?

I refuse to believe that general john macnamara is dead. he has to come back, and if he doesn’t I WILL riot.

only starkid fans understand the pure joy I get 57 minutes into Black Friday when Macnamara comes in and I hear America Is Great Again. seriously it’s like a drug.

Spies are Forever (among many other starkid shows) should be on Broadway and the fact that it isn’t is just blatant homophobia, I said what I said.

#spies are forever, #shitpost, #broadway, #musical, #firebringer, #starkid, #twisted starkid, #twisted: the untold story of a royal vizier, #tgwdlm, #the guy who didn't like musicals, #black friday, #i said what i said, #and thats that on that
33 notes · See All
anachronic-cobraText

#from the desk of anachron, #starkid, #black friday
19 notes · See All
minervas-sandwichText

Tgwdlm felt like a humorous take on zombie movies and their tropes. Black Friday feels like a takedown of humanity’s inherently selfish and violent nature and how easily they can be swayed and made to follow. It’s also a scathing review of the American government and capitalism and religion. It’s not the take I expected from the group that made multiple songs about dysentery, but it’s the take I got and I’m really not sure how I feel about it.

#starkid, #tgwdlm, #black friday
22 notes · See All
incorrectpeipquotesChat
Wilbur: I was gonna pull a prank.
Lex: Aw, your first prank. What was it?
Wilbur: I hired these guys in ski masks to kidnap us and I was gonna pretend to be a hero and they were gonna shoot me and drive the van into the river and that's when the drivers would go in and pull you guys out of the water and I would be standing there like "hey guys, get pranked much?"
John:
Xander:
Lex:
Schaffer:
Erik:
Xander: What the fuck?
#wilbur cross, #lex foster, #general mcnamara, #xander lee, #colonel schaffer, #erik herbert, #(robert peip agent), #black friday, #starkid, #incorrect PEIP quotes, #source: parks and rec
42 notes · See All
Next Page