This is my first quick write that I’m posting. It’s short, I know, but it’s pretty decent and it’s only part 1. Thank you for taking the time to read it. Let me know if you want me to upload the rest❤️

Elise knows that Harry likes her; that he supports her. She knows that he see’s her, and realizes how important she is. It’s in the way that he smiles when she glances at him and how he never forgets to laugh at her jokes, even if they are a bit dark and ill-timed. It shows in the way that he gives her his undivided attention when she’s speaking, no matter how busy the environment is, and through the simple favors that he does for her.

He’s nothing less than a gentleman with her and never hesitates to ask about her well-being. She feels his care when he has the silliest need to grab her a water bottle or buy her food whenever she’s with him. To be frank, it seems like Harry cares more about her than any of her past friends ever have.

And she loves it.

She would be lying if she admitted that it didn’t make her giddy to know that he respected her in such a way. It didn’t matter what relation someone had to him; Harry made sure to treat them like royalty.

And that’s exactly how Elise felt around Harry: royalty.

However, this still didn’t dismiss the nauseating sense of doubt that stirred in her gut. Add this feeling in with her insecurities and anxiety, and she was certainly made to feel like a proper idiot. She knew that she had developed feelings for Harry. It wasn’t a matter of her trying to stop this from happening—because falling for someone like him felt inevitable—it was more about trying to suppress these feelings as much as possible. Because she knew that when it finally came time to acknowledge said feelings, things would never be the same between her and Harry ever again.

Unfortunately, now is the time. This is the moment that she’s been dreading. She’s completely fallen for him and there is nothing more that she can do in order to ignore this.

No matter how much Harry respects Elise, how valid he makes her feel, it doesn’t wash away the overwhelming sense of insecurity that she’s been feeling. Although she knows that Harry adores her, she don’t quite know if it’s in the same way as his other female friends. He laughs with her and agrees to go to lunch together in his free time. He doesn’t mind coming over to her place for a rom-com sesh, or tagging along whenever she hosts get-togethers with her friends. He’s even brought her along to a few of his own outings, and introduced her to his fancy group of indie photographers, rockstar musicians and stunning models.

But nothing beyond that.

No dates. No sign of mutual interest. Nothing. Zilch.

There’s been times where she feels as if he stares at her longer than necessary, or touches her often—and certainly more intimate—than normal friends would. But that thought is discarded when it’s no longer him and Elise—when she’s shoved back into the world of his friends—and she see’s a glimmer in his eyes when he looks at his much lighter skinned, skinner, and—overall—perfect female friends.

They can’t help any of it.

But just because they can’t help it, doesn’t mean that she don’t feel any less threatened. Elise is not as graceful as them and certainly not as skinny. She doesn’t quite understand the celebrity life, which sometimes causes a cultural barrier between her and Harry’s world. She likes normalcy and everything that comes with it. Most importantly, she is the opposite of what they are. Heavily melaninated, sharp with the tongue, sarcastic, mostly indifferent, somewhat cynical and (as her sister liked to say) ‘annoyingly aloof’. She likes keeping a low profile—again, quite the opposite of Harry’s crowd—and to go with the flow.

The first few times she hung out with Harry’s friends, she overheard them voicing her behavior as ‘arrogant’ and ‘stiff’.

“She’s just quiet, is all.” Harry said, trying to defend her. “She only speaks if she trusts you or if it’s absolutely necessary.”

And it took a while for his friends to believe him. After all, Elise didn’t fit in with them. She also wasn’t the usual person that Harry likes to surround himself with.

Elise can’t help but think this as she knocks on his door before ringing the doorbell.

Even now, on a hot and sticky Sunday afternoon, she can’t help but ponder over why Harry has invited her over.

Out of all the people that he could have chosen to spend his day with, it’s her.

It’s hard for her to fathom.

The door swings open, creaking because he hasn’t gotten the rusty bolts fixed, before she finds him standing before her. He’s wearing a pair of sweats and a grey cotton t-shirt. His hair is messy, cheeks flushed red as a beard lines the lower half of his face. His chocolate curls are messy, a sign that he’s just woken up, with sleepy green orbs and ruby lips.

“How many times,” He drawls slowly, voice deep and thick with sleep as he sets his gaze on her. “…Do I have to tell you-”

“Not to ring the doorbell.” She mumbles, a bit bored by the same conversation that seems to repeat every Sunday. “Well judging by your appearance, it seems like a doorbell is the only way you would have answered the door.” She adds, sending him a level glance. “It’s 3 pm, H. How much longer were you planning on sleeping in?”

He grins. “Until you showed up.”

She hums lowly, already allowing her attention span to drift away as she steps through the doorway. He barely moves to the side, causing her to brush against him, which sends an electric jolt through her.

She feels a warm rush shoot straight to her heart at his close proximity. If it weren’t for her chocolate skin, he’d probably be able to witness her flustered state by the reddening of her cheeks, but Elise thanks her melanin for making sure that isn’t possible.

Just when she feels herself recovering from his touch, she’s smacked in the face by the smell of him. He isn’t carrying the rich and husky Tom Ford cologne that he likes to wear during special occasions. Instead, his natural scent is much more appealing. He smells of lavender and bar soap, just like he always does when he starts to become deeply domesticated at home.

Soon enough, he’s locking the entrance door behind the pair of them, which causes her to snap out of her thoughts. Feeling incredibly hot in that moment, Elise heaves a sigh, slipping off her jacket and shoes immediately.

The slight hum of the T.V fills the atmosphere, along with the distant wooshing! of the dishwasher from his kitchen.

His hand rests on her lower back, ushering her down the entrance hallway and towards his living room. She tries to ignore the shivers that his touch causes. “Hm?” He answers, breath tickling her ear.

“To spend time together…”

“Yes.” She nods slowly. “But why? Why me? I mean,” She swallows, trying to sort through her thoughts. It’s not often when she speaks this much in consecutive sentences. “You have so many other friends you could spend time with.”

“But I don’t want to spend time with them. I want to spend time with you.” He says it in a matter-of-fact way, almost sounding a bit agitated. His hand is slipping from her lower back as the pair of them finally step into the living room. He leaves her by the entrance, already grabbing a folded blanket before plopping onto the couch. Meanwhile, she’s staring at him with a fixed gaze. “What’s all of this about, El?” He continues. “I always spend Sunday’s with you.”

Own up to that shit you said - Growth

Ok, here’s what my starter locs are looking like after 3 months.

ARE THERE ANY BLACK PEOPLE ON TUMBLR?

I just want to lay up and cuddle with a nigga I like. Is that too much to ask 😩😩

People will call you a silver spoon just because your parents did their job 😂. Sorry, paper plate! 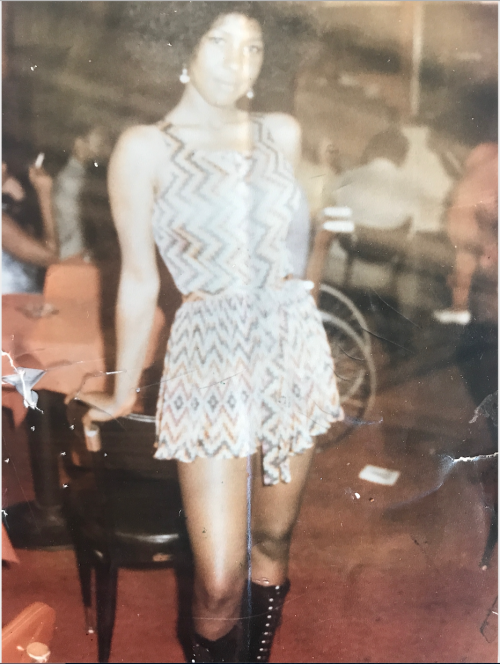