So, with 286 and 285 proving my two and a half year old prediction of “AfO is going to body snatch Shigaraki” (from April 2018) right-sort of since I didn’t have any idea as to how the details would work- here’s how and why I was able to predict All for One body-snatching Tomura.

1)that bit of dialogue I reference in the original post from the end of Season 2:

“Make him into the next me.” I took it like “oh…if that’s literal the potato will be taking that body”

2) All for One is the parallel for All Might in this story.

All Might is deeply selfless. He gives his all in heroics and for his students.

Which means, as a result, All for One would be inherently selfish in his goals and towards his “successor.”

Whenever I saw All for One was giving Tomura all this stuff (via the doctor) I was thrown through a fucking loop because it contradicted my reading of the character and I had to reconsider if I’d misread him. Because that is possible.

I mean, I’ve had years to hone this skill, but I can still miss a few clues here and there and make my reading end up wrong.

But 285 and 286 have actually informed me that I had read him correctly.

All for One is so very deeply selfish and his will and his desires will trump even those of his supposed successor.

Because while a lot of folks (myself included)because of Horikoshi’s love of Star Wars like to liken All for One to Darth Vader, he’s actually Palpatine.

The powerful man who corrupts others for his own selfish means and ends and intends to rule forever and body-snatching is something he is willing to do to keep his existence, and his grip on the world intact.

If I were to keep the Star Wars analogy going, it all just kind of falls apart because the other characters in the story don’t have as strong a parallel with Star Wars, so I’m going to stop it there and go back to my main text based points and use other media for parallels.

So, now back to my main point. With what I’ve read from the various textual clues I’ve seen hidden throughout the manga, there was always going to be this result because All for One’s one goal was to get One for All back by any means necessary. When the doctor started giving Shigaraki all these things, the out-of-character generosity of All for One just kept throwing me. With these last two chapters now it reminded me of a quote Gandalf said to Saruman in The Lord of the Rings: Fellowship of the Ring,

(transcription–Gandalf: There is only one Lord of the Ring. Only one who can bend it to his will, And he does not share power!)

And that above all is how I’ve always read All for One. Sure, he’ll give and exchange quirks for people,  but it was always in exchange for a favor for him. Which was a very Godfather-esque way of doing things.

You know who else gave out gifts to get others to be more amenable to him?
Sauron.

After all, One for All’s half-base component quirk was a quirk that was forced upon the First because All for One wanted to control his brother.

All for One’s “gifts” were also a means of control.

So, everything he ever gave Tomura was always always a way to control him, and now, he’s taken it one step further.

apparently some people don’t understand that AFO is trying to take over shigaraki’s body against the latter’s will, and believe that these two are going to fight together against nana and deku?.. sis, i-

rat bastard  AFO is choking tomura and telling him to hand his body over, while shigaraki’s trying to say ‘no’ and ‘go away’,,, how hard can it be to understand what’s going on???

Horikoshi watching you guys misrepresenting the characters grabbing each other’s hands as something romantic: k bet

LOL. Poor Shouto. He’s really trying to hold it together, but he has absolutely no clue what the hell is going on, plus, people keep getting injured faster than he can patch them up and he’s like a little retro phone game-character, running around trying to catch the bodies falling from the sky.

Yeah, probably true that the Nana - All Might parallel is shaky, it was just a thought as I’m trying to put a positive spin.

I hope Bakugou has made a difference beyond triggering the protagonist rage though (which seems to be more triggered by Shigaraki disrespecting Bakugou, you’d think after Monoma and Shinsou, Deku would have enough self-control not to rise to taunts) by cornering Shigaraki to the point that he had to let AFO in. Maybe AFO and Shigaraki fighting inside Shigaraki’s mind is what will save Deku from losing OFA? It’s kind of indirect, but this way Bakugou’s plan, Endeavor’s Prominence Burn and Bakugou’s sacrifice play all have some meaning. But I still want also Deku’s rage not to be portrayed as a good thing, and I would still love Todoroki and Bakugou have some impact on the fight - proving the whole - don’t play hero alone - point Bakugou was making. 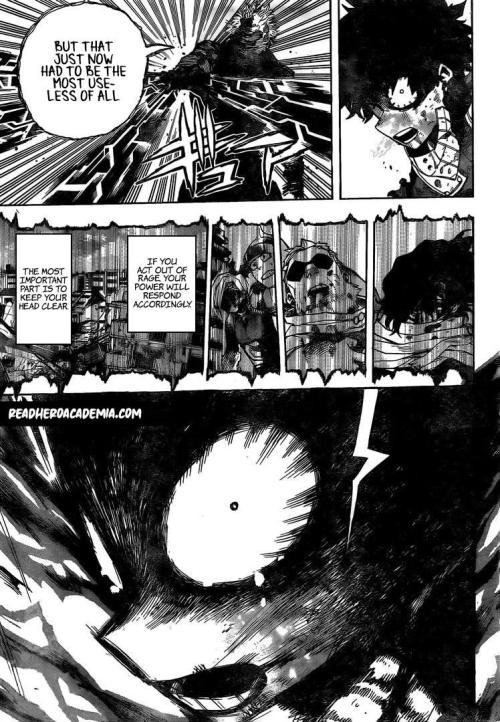 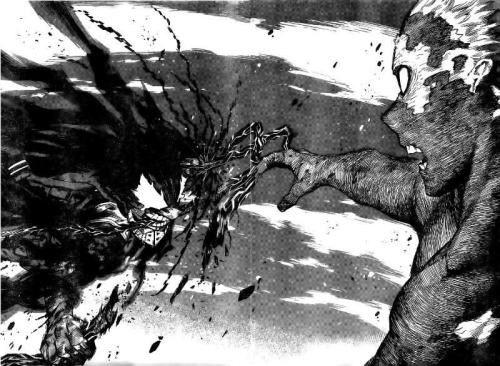 I WANT TO CRY 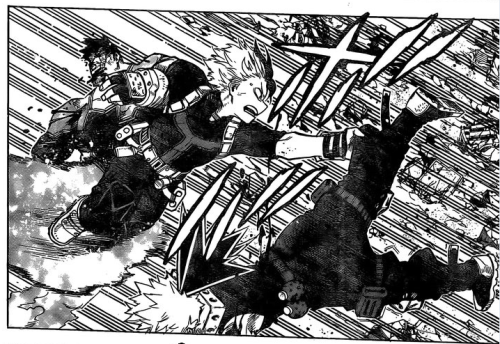 Katsuki is a C H I L D. Lest y'all flipping forget.

The main hero course is full of 15-16 year old C H I L D R E N in their first goddamn year. They’ve never had to be in a situation as dire as this.

They shouldn’t have been in a situation as dire as this.

They are literal children who were sent to participate in an all out war without having any prior information.

They should never have been there.

If OFA as a secret got out if only the Pros were there then so be it.

The hero course students should NEVER 👏🏽 HAVE 👏🏽 BEEN 👏🏽 THERE.

yes, person who thinks they have a hot take on Izuku rn, Shigafo will absolutely give him a chance to try catching Bakugou before he falls 🙄

Izuku totally isn’t ignoring Bakugou cause there’s a murderous supervillain nearby. Of course not 🤷🏽‍♀️

Which do you think is the most powerful bakugou scene/panel????

For now, it seems like Bakugou’s sacrifice was completely useless in the big scheme of things, which is what I find frustrating. It seems to be completely undercut by how Deku disregards him and by how Deku deals with a much bigger burst of those tentacles with his teeth and broken arms, so Bakugou got skewered for absolutely nothing other than making Deku sad enough to enter upgraded rage-mode.

Though I’m thinking the devastation Deku felt about Bakugou falling was the emotional link to manifest Nana, who was devastated about giving up her son or something like that, since each OFA-quirk seems to have an emotion linked to it (like rage was for Black Whip). It would also further mirror the Sludge monster incident, where Deku running in didn’t impact the fight directly; it only shamed All Might into action so he could save Bakugou. So in this case, Bakugou’s sacrifice could serve the same impetus for Nana.

But if we take that parallel to its natural conclusion, then how that heroic moment gave Deku OFA, I would still think Bakugou should get a quirk upgrade from interacting with those activation tentacles, and then I won’t complain.

AFO/Shigaraki cackling about how Bakugou’s sacrifice was the most useless out of all should normally mean that it will have some decisive consequences to the hero side. I’m just hoping not all those benefits accrue to Deku (who already got the rage-boost), but some of the pay-off will be for Bakugou himself.

As for Shouto, “at least he is there” indeed. I’m fairly convinced that he’s meant to witness something conclusive about OFA and the fact that almost everyone else (including Endeavor) seems unconscious means that Shouto is the next to be initiated into the OFA-secret (though I will be mad if Aizawa is still left out). He showed up exactly in time for Float and now he can watch the Vestige-battle (whatever that may manifest as on the outside).

I’m still waiting for his flashfire moment. Considering how his flight is treated as nothing of a big deal, I definitely think that something else is going to come from him in this arc. Hopefully it will be worth the long wait.

Yes! Todo goes straight for yanking at Bakugou’s pants.  Who needs mushy stuff like handholding? That comes in year 2 of their relationship. :D

Also, damn, but Shouto has some serious core muscles. Try balancing on one leg, while holding a 100 kg weight in one hand and probably around 70 kg (with equipment and stuff) in the other, while twisting your torso.

I’m so happy with Shouto grabbing Bakugou’s leg - it encapsulates perfectly that dumbass energy I love so much in TDBK. 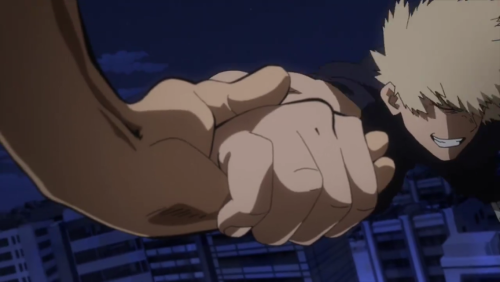 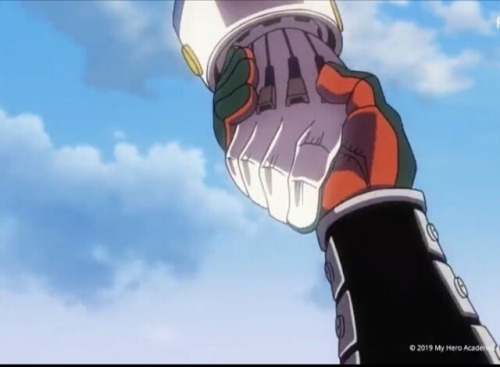 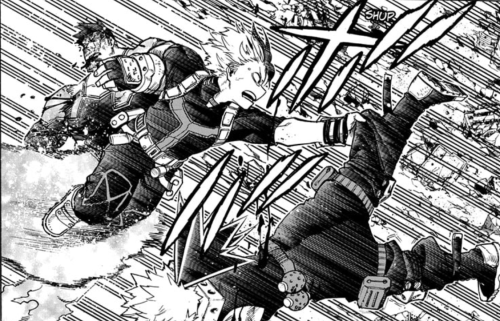 this would devastate Izuku if it’s confirmed. the guilt he’d feel for every villain attack on their class being (in his mind) his fault and because of him, i…

some of you shiggy stans, i-