👉👈 its him! Hes waiting for izuku

💚No I don’t actually! I want to make one though now that you bring it up. What I would put on it is another question thank you so much! 💚

You started something serious don’t ya

Warning : mention of smut (nothing really spicy) swearing (because me not even bakugou)

It was a simple nigth in the dorm of class 3-A but yet you coulnd’t focus on the movie in front of you. The reason? do you know someone who  can focus when they have a bakuhoe next to them? NO.

He wasn’t doing anything special but yet he looked so handsome just wearing black t-shirt and jogging but still hot. They were nobody behind the two of you so you thougth that maybe bitting is neck would be great.

So you did it of course, you turned your head to look at bakugo’s face and approched yourself then you go a little bite down adn start bitting is neck seductively.

Even tough bakugo and you are dating since 1-A every time you surpise him more and more, he looked at you, eyes wide open and said “you started something serious don’t ya?”

And then in a flash he carry you likke a potato bag (nothing romantic) and before you knew it you were already in his room. Letting all your comrade confused.

You were both in a study session, you were trying to help him because his grade were going down (if it can be possible).

At first ot was ok both of you were serious but knowing mirio he won’t last long. After 30minutes he jumped on the bed and acted like a baby because he wasn’t able to finish an exercice.

Having an idea you closed your book and you sat at on his lap and started bitting his neck. His hands started to removz your shirt but before doing it.

You pushed him away he looked at you “why y/n?” you just said to him if he finish this fucking exercice he could have your body.

He finished his exercice as fast as he can and we can say that he didn’t to one more exercice (he have some more serious stuff to deal with).

You were just sitting on a bench, she was drinking hot tea and you just looked at her. She have snow on her hair it make hair look so cute too you.

When it come to saiko you can’t have an hold on yourself, and rigth now her neck looked really apealing so you bite him and licked it a bit.

She moaned and looked at you with an arrogant smile. “We have to go home it’s starting to get really cold don’t you think my dear”

Speaking the true the reason she wanted to get home wasn’t because of the cold and the snow.

It was during a hero conference, for the heroes beside you it looked like you were just resting your head on her shoulder because her hair were hiding the real deal.

Its been ten minute and you were still making lobe bite all over her neck. She have a content smile, she was really enjoying herself.

Although she don’t know if she would be able to handle her horniness anymore but she is a pro hero she could handle this kind of think? yes?

When you started biting his neck he stopped breathing and every movement.  He blushed and looked at you why his eyes wide open, shocked

The two of you were alone but it looked like a hundred of people were watching you and him. He was so embarrassed, why would you do something like this to him?

If you bite his neck again he would maybe have a heart attack, please protect him.

🖤So if you guys wanna talk or become friends or just want to ask me questions message me or drop an ask into my ask box!🖤

💚I love making new friends guys! So weather you just want to talk or you wanna RP or if you want to just ask me shit go ahead I’m all for it!!💚

💥Love you guys hope I hear from some of you soon💥

🔥Bakugous fucking sick to death of being inside.

🔥He’s played the games, watched the movies, caught up on the shows, and done the training in the backyard. He’s over it.

🔥His frustration is clear on his face, and his response are even snappier than usual

🔥Frustrated that uraraka seems perfectly content in her complacency to sit at home.

🔥Too emotionally exhausted to admit he wants her close. So he tries to focus on getting work done instead.

🔥Main dialogues consisted of “whatever” and “what do I care!” (he actually cares a lot)

🔥 Played the drums so much his fingers bled.

🌸The first week was fine, she kicked Bakugous ass on the ps4, the switch, and in the backyard.

🌸Wants to cuddle, but Bakugou is extra tsundere and acts like he wants zero touch

🌸Hungry af for Bakugous skilled cooking. But limiting meals to only dinner and light snacks to ration.

🌸Trying to stay content in her reading and training during the day.

🔥🌸Definitely running out of tp and it’s getting scary

🔥🌸 The house smells like warm caramel cuz Bakugous explodohappy hands are going OFF.

🔥🌸 Uraraka has been enjoying taking gentle care of him while he slowly melts down. He’s letting her kiss him a little longer. And she’s been catching him study her while she reads near the window.

🔥🌸He’s been making small snacks and bringing them to her every so often cuz her smile makes his head quiet and his heart happy. Still says whatever when she thanks him.

🔥🌸The nights have been extra exciting with all the free time to try new things.

🔥🌸Day sex wasn’t really a thing until now and it’s been a really nice way to pass the mid morning hours after training together.

🔥🌸 Waking up late and staying up late weren’t their usual routine, but they are managing.

🔥🌸He’s a lot more cuddly and gentle at night while he rests his face in her sweet lavender and bubblegum scented locks. She gently burries her face into his neck taking in his burnt caramel scent. This is their peace from the terrors of the outside world.

🔥🌸They’re both disgustingly good at Cards Again Humanity, who knew her mind was so dark

🔥🌸They’re definitely not sick of each other yet.

Kirishima watched Bakugou scowl up at the sky in pure disgust as rain began to trickle down. The water was like little crystals dropping down, only to shatter as they hit the ground. Kirishima couldn’t help but find the scene in front of him pleasing. Despite Bakugou’s deathly look, it looked like it came from somewhere out of a dream. As the water softly hit the angry blonde’s skin (which was apparently punishable by death) the droplets easily evaporated into steam. The watery mist rose above, casting an otherworldly look to the blonde.

Summary: After looking for months for a job position you finally get an opportunity at a big company. Being the assistant of the angriest person was going to be a lot harder than you thought it would be.

A.N: I might add the part where the sleepover takes place is that okay with you guys? Would you like to see what happens? Feedback is appreciated as well! Thank you for your support <3 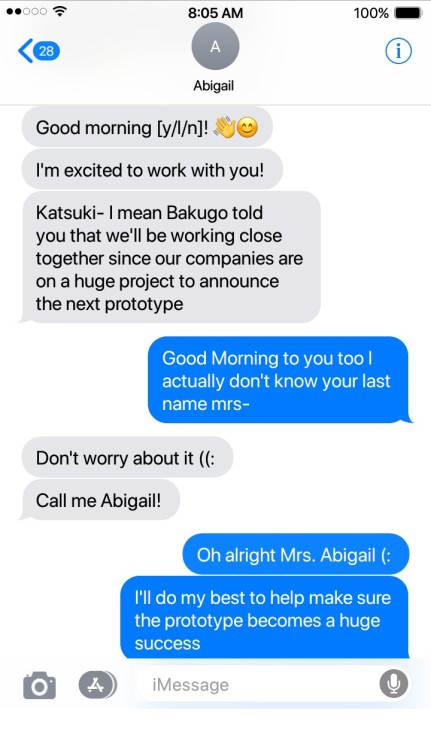 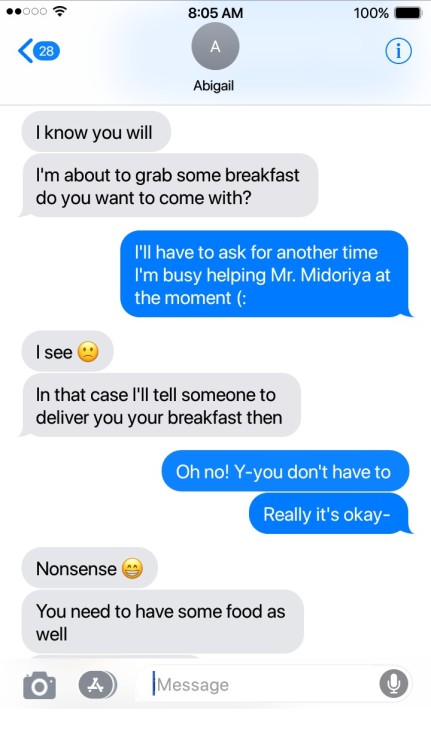 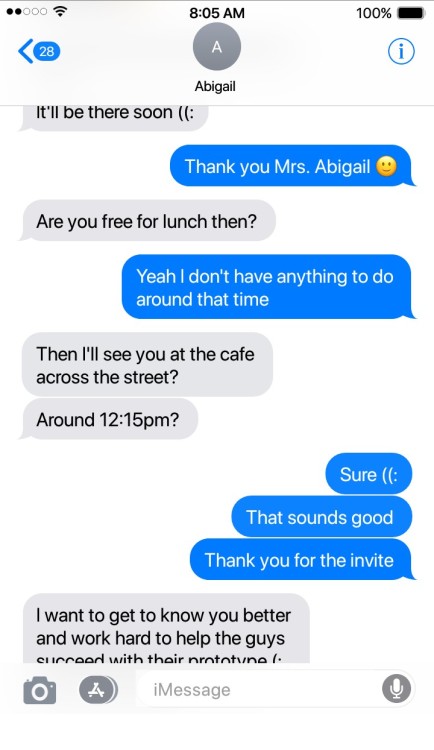 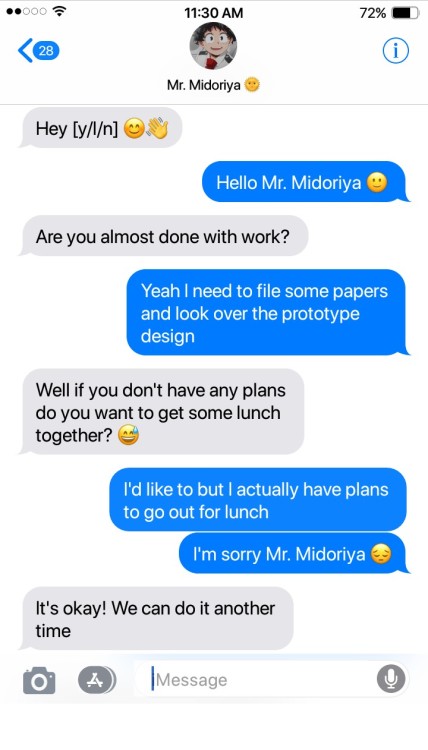 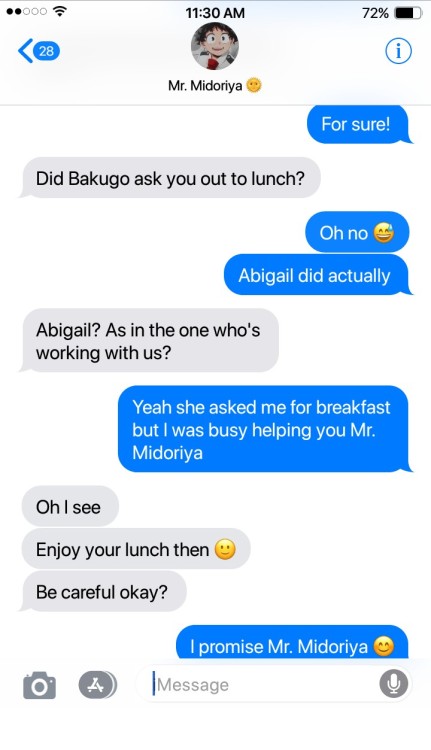 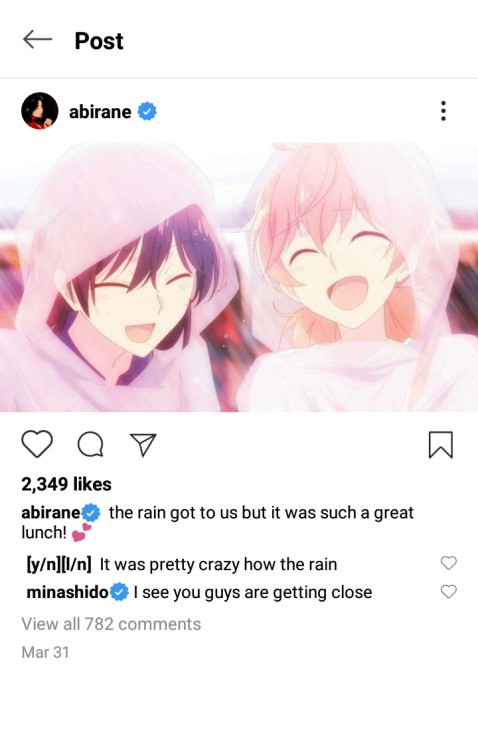 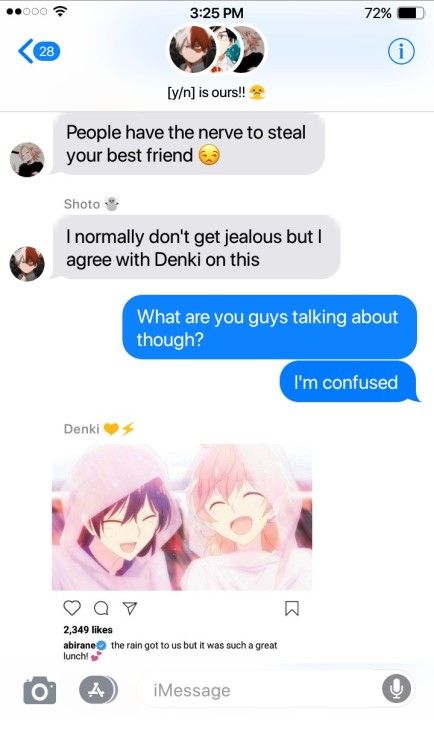 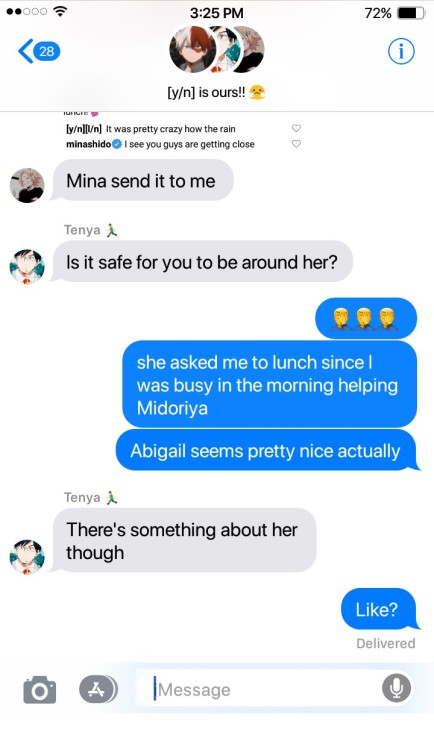 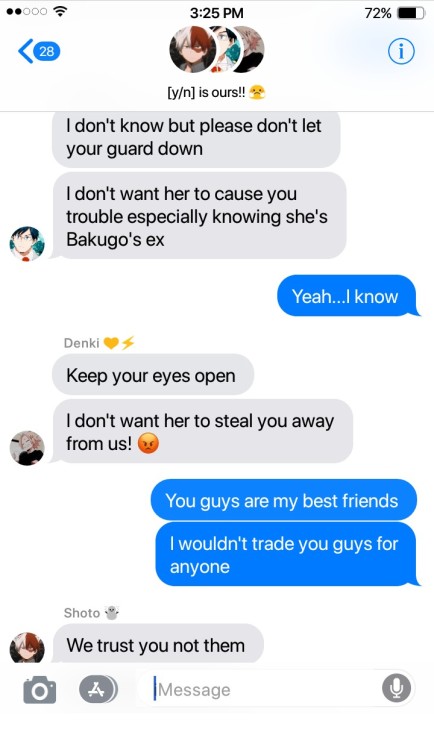 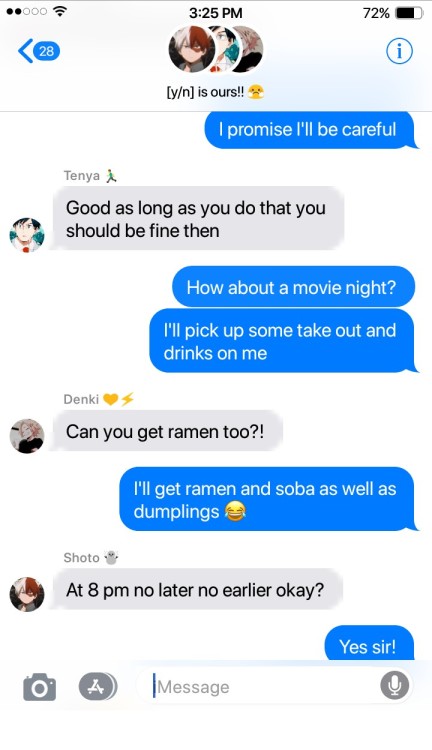 As every Sunday (y/n) woke up first to cook the breakfast to all her classmates, she really love to bake so decided to make a cake.

She put an apron with a funny phrase that Denki had bought weeks ago, (y/n) was making the dough when someone enter the kitchen.

A sweaty Katsuki Bakugou, Bakugou was compromise with his training, everyday he went out to run, now he was back, searching for water.

—morning extra —he got closer to (y/n) to see what she was doing— what are you gonna bake?

He already admitted, but he’ll never say it out loud,that (y/n) was the only other person despite himself and Sato that knows how to cook, so he was kinda exited for the cake, even when he wasn’t into sweets.

Watching her concentrate mixing all the ingredients, he notice how (y/n) bite her lips to concentrate, and some rebel hairs, so he took the strands of hair to fit them behind her ear, making her to look confused at Katsuki.

—yes! I love soft dough, soft like a cloud

She move to look for the strawberries, when Bakugou saw the stupid phrase on her apron.

So he got closer, face to face, (y/n) was really confused what was happening? He rest his hands on both of her shoulders and gave her a kiss on her lips.

A kiss?, well, a peck?, it lasted like five seconds until he broke up.

Disclaimer: gif is not mine, I found it on Pinterest

second group of pictures for my au 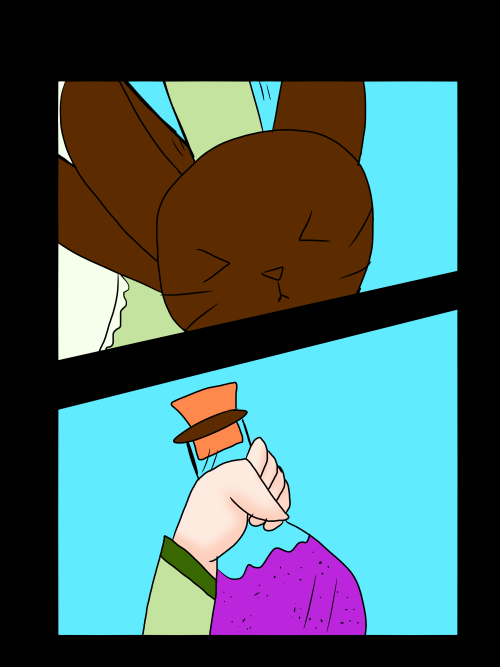 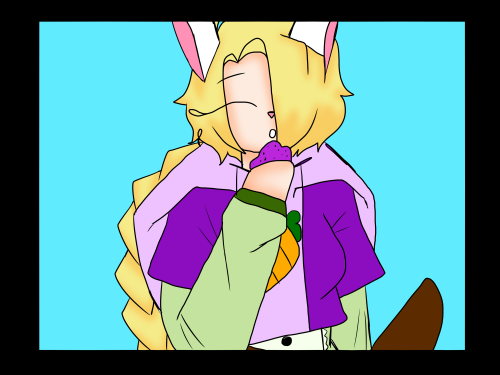 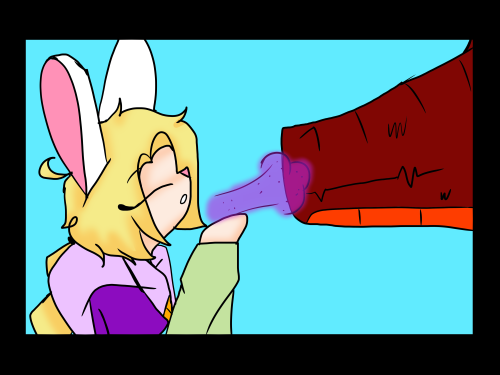 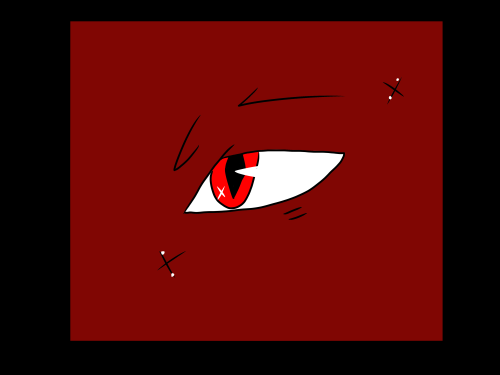 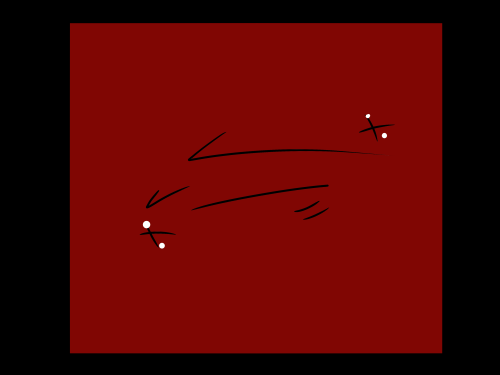 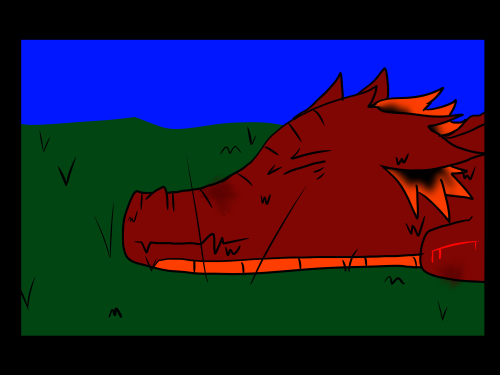