Hm, well, the HC allowing innocent people to die for their agenda (which Hawks opposed) is different from Hawks ending up killing Twice - but yeah, since I personally never understood the outrage there…

And agreed. Dabi went after Hawks’ mom before the raid (obviously) and was planning to drag his past out for a long time, so he made it personal whether the Twice incident had happened or not. Besides, we knew that Hawks was entangled in the Todofam plotline, so I don’t get being upset over this when Hori has set it up since Hawks’ introduction arc, lol. And even then, I think it’s obvious that Hawks doesn’t seem to be holding any grudges. When he read his mom’s letter, he didn’t even think about Dabi or what Dabi had done, it was just disappointment and resignation directed at his own mom - the Dabi case itself is twofold: one, he’s a villain that obviously needs to be taken down and two, he’s a Todoroki and his family wants to save him; the Todofam’s situation of healing and saving each other seems to resonate deeply with Hawks, so it’s no surprise that he wants to help.

But from the looks of it, BJ and Hawks are checking off missing information and Touya (and his background) were just one check-point among others. People giving Dabi more importance than warranted :p

I just need to know how the First and Second user of One for All knew how to transfer One for All because as far as I’m concerned it’s by DNA and only by DNA.

So with that in mind, there is no heterosexual explanation of how the First and Second user knew how to transfer One for All.

TodoMomo sitting next to each other on the train ride home from the hospital they’re in in the current arc. It’s a really long ride, so Shoto eventually falls asleep. Momo notices how peaceful he looks, something she hasn’t seen him be in a very long time. She leans over and wraps her arms around him and whispers against forehead, “I’m so happy you’re ok Shoto. I can’t believe I almost lost you.” Then she gently kisses his forehead. Not too long after she falls asleep too and she’s still holding him. Everyone else doesn’t want to wake them up when they get back to the UA dorms. They both feel embarrassed knowing everyone saw them, but they both secretly don’t regret a thing.

Hawks getting all over todoroki’s personal space and theorising about his scar got me like: 💀💀💀💀

And we don’t even know is shouto’s uncomfortable bc the panel kinda shows he’s flustered because hawks’s near him? lsjdlsls

I’m not sure what he’ll do to be honest. He’s obviously good at keeping secrets, but it might be too late to still try and keep OFA under wraps. The reporters already know about it, have already asked about it. Their questions of it being related to All For One will have to be answered one way or another.

Reporters and the top three heroes have questions for All Might and Deku. And with Deku in a coma, All Might’s going to have to be the one to answer them.

Okay, I will admit that I am absolutely calling bullshit on Hawks being released from the hospital only a day after the raid??? He threatened someone. It makes no damn sense otherwise.

Like Shouto’s still in there and his burns are arguably not as severe, since he has heat resistance and can still speak at least. And Tokoyami just got released and all he had was a burn on his leg!!!!

Hawks woke up from that coma, called Jeanist, and raised absolute hell in that hospital until the doctors let him go. This is my personal canon and I accept no arguments. 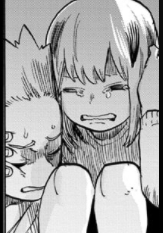 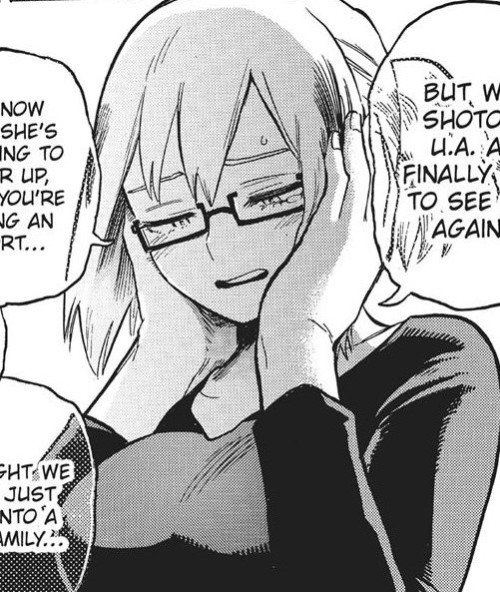 I think Touya didn’t want to surpass All Might as his own goal. He wanted Endeavor’s love, attention and spend time with his dad doing cool stuff together. And since All Might has retired - what does “surpassing him” even looks like.

The person Touya now wants to outdo is Shouto (the All Might stand-in of the Todoroki family, and Endeavor’s masterpiece) - but even that is only in a stick-it-to-them kind of way rather than because surpassing All Might is something he wants to do for himself.

He may respond with some glee to the news though, because it means that Shouto doesn’t stand a chance either and never did, and he’s just as flawed as Touya was, which in Dabi’s book should piss off both Endeavor and Shouto - so it’s a win for him?

+ chosen for a mission like this. Because if you have a double agent whose close to people, they can be used as leverage. And you’re expected to cut ties for the entire duration you’re undercover. (Now this. I’m over the moon to realize this means Hawks and BJ’s relationship developed before Kamino. How did THAT happen, I wanna know what made who look at whom and go “yeah we friends, keep scrolling.”)

Yeah, I kind of get why people saw him as isolated but I still never completely agreed, at least not to the extent that some people saw it.

Endeavor and Hawks only met at the rankings, but their relationship was always written as really significant for both of them. Hawks was introduced as part of Endeavor’s character development, and there’s a lot of emphasis placed on the fact that Endeavor was able to “read his expression” and figure out his message about the PLF. There was significant trust there from the start.

Tokoyami is similar. They only bonded recently, but there was a lot of weight put into how highly Tokoyami regards Hawks, even before the raid (although I totally understand ppl not putting as much significance there due to the fact that Toko’s a kid lol).

Imo, Jeanist and Hawks were AT LEAST implied to be friendly with one another before this, considering Jeanist mentions Hawks doesn’t come visit him often (whether that means they they aren’t too close or just means that Hawks doesn’t usually meet him at his apartment is kinda up in the air). Same way that Hawks and Edgeshot are implied at the rankings to be friendly as well. I definitely agree that we only got to know how close they are fairly recently though.

I think it’s a product of how Hori writes a lot of his friendships? There are a lot of relationships between the students that get kinda overlooked as well b/c they’re only mentioned in small moments like that.

I guess I just never bought that Twice was his first real friend, or that their friendship was somehow more genuine or more important than the ones Hawks had with other characters. He’d had pretty similar bonding moments with Endeavor and Tokoyami, who arguably understood Hawks’ character a lot more that Twice ever did as well.

Looking back, I think a lot of my issue with it is just that I think it super contributed to how much ppl misread Hawks’ character lol.

#bnha#bnha manga spoilers#hawks#best jeanist#endeavor#fumikage tokoyami#id love to see that original convo between bj and hawks where hawks tells him the plan lol#but i don't think were gonna get it#anyway i think the long and short of it is that i just never saw hawks as someone with like absolutely no friends#like i think he tries to keep a certain distance but tokoyami and endeavor were both privy to some of his values#jin as well but they were way too different in the end for that to read as overly genuine to me
51 notes
rat-suki
Text
#dont mind me using text from different panels lmao#im a cheater#bnha edit#manga edit#dabi#todoroki touya#touya#bnha manga spoiler#bnha spoiler#bnha manga spoilers#bnha spoilers#this one is kinda :/#just for practice#my edit
128 notes
kirimedeku96
Text

Me if I was Shouto:

I’ve always kinda disagreed with posts about how isolated Hawks is, and it’s honestly because of moments like these:

Like Hawks is a dude with a lot of secrets, sure, but there are so many characters who place a huge amount of faith in him. There’s no way Jeanist didn’t know he was at risk of not only dying, but also being turned into a Nomu, but he still put his trust in Hawks to get him out of there safely. And now he’s reiterating his decision to go along with whatever Hawks’ next plan is as well.

Endeavor pretty heavily implies here that he knows Hawks set him up, but he doesn’t even really question it, only warns Hawks to be careful not to get hurt. When Hawks tells him that a war is coming, he believes him without question, and spends several scenes worrying about Hawks or feeling guilty that he couldn’t do more to help him.

And even after Dabi tells Tokoyami that Hawks killed someone, Tokoyami still believes in him, because he knows Hawks’ character. He even assures him that everyone else does as well. Tokoyami puts his life on the line for Hawks in his lowest moment because he fully believes that Hawks is a good person.

Idk, i find it so ironic, especially in comparison to Twice’s lines about how he felt bad that no one trusted Hawks, that he’s surrounded by so many people who have unwavering faith in him. Even when they’re put in situations where it would be so easy to turn their backs on him.

My man having a council meeting

Hahahaha I’m so surprised and thrilled we got another chapter with so much Hawks content so soon!

I honestly love looking through the chapter tags every week and seeing who’s pissed and who’s thrilled over which characters showed up. Everyone is really only in it for their faves lol.

I’m actually super excited for the Deku + Vestiges convo though! I hope I get to see that cool little dude with the big collar again. Maybe find out his name. <3 ALSO I’d love more of that sweet AFO/OFA backstory. Izuku’s unlocked a couple more quirks so I’m just over here rubbing my little raccoon paws together eagerly. Give me more early-quirk era history pls.

Things would be so much better if they all had a big discussion. But it seems like the chaos will continue as they are all acting in little fragmented pockets, off of information they have. So I fully expect some misunderstanding here.

Those hospital rooms are ridiculously big and it’s so bizarre that there is no visitor’s chairs - so everyone just has to stand around awkwardly.