LOV Spa Day, a wonderful joke between me and @jackleerae that spawned this. Enjoy 😁

Aizawa: I would kill any and every one of you for him. 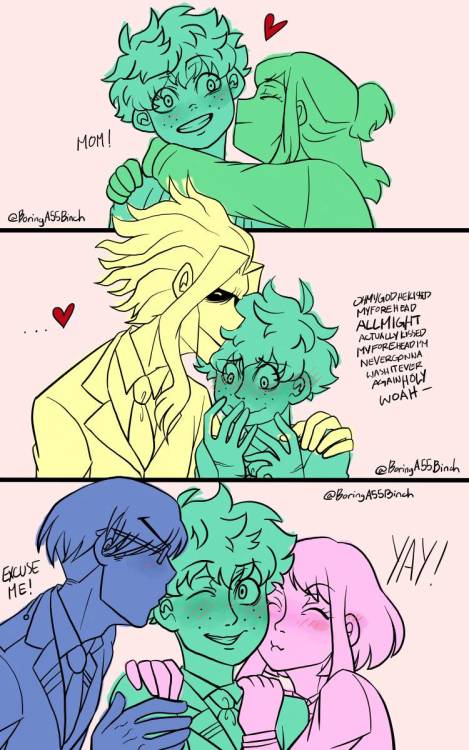 [4:00PM] the dorm of class 1-a suddenly runs out of power. the class collectively agrees to use kaminari’s quirk as a substitute for a while. they told him it was part of his “training”.

now that im looking back at this- i just now realized that i confused karminari for kirishima- ill make a seperate headcannon for him! sorry for the confusion!

⤷ he would ask the girls (execpt for you) what to do for a first date. you two have been dating for 1 month, but never had a first date because of school.

⤷ after hours of planning, stressing, and switching up the plan, he figures out what to do.

⤷ he’s never been to one, but the girls were talking about what you like to do and rollerskating was the first thing that popped up (sorry if that isnt your favorite thing to do 🥺)

⤷ after figuring out what to do, he texts you to meet him in the common area afterschool after you change out of your school clothes. of course you said okay, but you were skeptical about this.

⤷ the next day, afterschool, you got dressed into a white graphic tee and a black skirt. you checked yourself in the mirror that in your dorm, went downstairs, and waited in the common area.

⤷ you waiting on him for about 5 minutes until you heard him behind you.

⤷ “sorry to keep you waiting. i couldn’t pick out what to wear.”

⤷ you turned around and was met with todoroki in a black turtleneck and black jeans. if you didn’t die the first time you saw im, you have officially died now. sorry, i don’t make the rules.

⤷ you thanked him and returned the compliment. he nodded his head, grabbed your hand, and he lead you out the door of the dorms.

⤷ after 15 minutes of walking and small talk, you two finally made it to the skating rink. you two went inside and saw all of the strobe lights flashing everywhere and people skating.

⤷ you hugged todoroki and thanked him tremendously for taking you here. he of course hugged back and said ‘you’re welcome.’

⤷ todoroki went and paid for the general commission and two pairs of roller-skates (with endeavor’s debit card. make his pockets hurt😋). you two put on your roller-skates and went to the rink.

⤷ well, more like you went to the rink, todo was struggling to stand up. you went back to him and helped his to the rink. he thanked you and attempted to skate

⤷ he busted his ass.

⤷ you snickered to yourself and attempted to help him up.

⤷ you busted YOUR ass.

⤷ but its okay! you two eventually got up and you helped todoroki with skating. he quickly learned how to skate and was skating like a pro on the rink.

⤷ you two raced and todoroki won majority of the time, but you were happy that you could teach your boyfriend something.

⤷ you grabbed todoroki’s hands and started to skate backwards while he skated forwards. oh god he loved when you did that.

⤷after you two were tired, the both of you went back to the dorms to be met with the 1-A girls pestering about the date.

⤷ you told them that you would tell them later because you were really tired, and they understood!

⤷ so you two and todoroki both took a shower (separately) and mysteriously not really ended up sleeping in todoroki’s room.

⤷ everyone was surprised when you and todoroki walked out of his room together.

an; ahhhh!!! my first headcanon ask!! tyty anon, you’re the best!! and thank you for 400 followers!!! you guys are so sweet 🥺❤️ please send more and i hope you guys enjoy!!

• be prepared to be fussed at in the kitchen. katsuki doesn’t play when it comes to food.

• the ONLY time you’ll help is when you pour the stuff in. he doesn’t trust your ass with measuring and the appliances.

• he looks at you to be met with puppy eyes.

• bakugou almost killed you for burning your finger like a dumbass.

• being the taste tester is ALWAYS your job. youre his number one critic (even though his food is ALWAYS good)

• you’re on your phone, waiting for the food to finish when hear katsuki call you-

• you dashed to the kitchen, almost busting your ass, to get to him.

• when you get to him, you open your mouth and close your eyes, waiting on the pasta to get into your mouth.

• you hear katsuki huff a couple of times before feeling something hot being stuffed in your mouth.

• you chewed and of course it was bomb.

• you opened your eyes to see katsuki smirking.

• i know we established this, but imma say it again.

• he just doesnt want you to get hurt thats all 🥺

• since katsuki is gordan ramsay, kirishima is the walmart verson, i said what i said 😡

• YOU dont trust him with the appliances.

• he burned his hand on the stove-

• okay so, you two were talking and he set his hand down.

• bakugou told him to shut the hell up.

• had ice on his hand for a couple of days..

• he doesnt trust stoves/ovens no more, so he leaves that up to you :)

• “babe, you could’ve put the ketchup on the side-“

• “aesthetic my ass, you’re doing too much.”

• you HAVE to take it back.

• he’s much happier that you took it back.

• now he puts a little razzle dazzle on his dishes :)

• yeah… you’re doing the cooking mostly by yourself

• catch him making tikoks in the kitchen and only showing the backside of your body.

• you just stare at him

• if you call on him to help you with something, he would bust his ass just to help you.

• he slipped and fell

• he busted his head

• you had to stop what you were doing and help him. (not that you didn’t mind or anything.)

• you made him lay down so he could rest

• so he facetimes you and pretends he’s in the kitchen helping you.

• even though he’s just in the living room.

• while you’re cooking, he’ll send you a tiktok of him singing

• what the hell did you get yourself into…?

SO, during this quarantine period and all I noticed that a lot of you guys had become (more?) depressed. I really hate when people are feeling down because… I mean who deserve that?

If you have, like me troubles sleeping or just you want to pass time and think about other things I created an ASMR YouTube Chanel ( Who is quite a Fanfiction reading Chanel tho) to try to help you cope a little bit : PeachyCan

I am taking request so if you need one of our boys or girls from UA High to tell you they love you or just want a specific scenario, DO NOT HESITATE AND SLIDE INTO THE DM’s you know 😏 Even if you just want to talk or else I would be more than happy to discuss with you all 😘😘

Hope I can help even if it’s just a little bit so don’t hesitate and share the message, and the Love , PeachyCan.

The things on todoroki wrist are actually pieces of a xylophone.

⤷ an; this texting au has no shippings. its just a funny story i wanted to do 🤍

I got reminded of that scene in the Tobey Maguire spiderman movies.

Shouto’s really going through it. 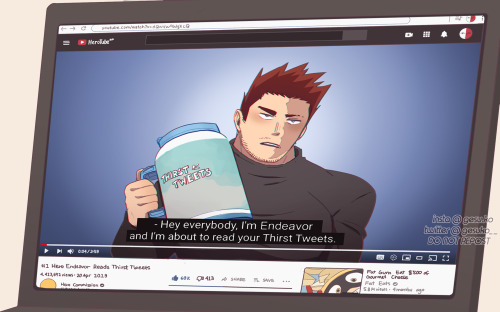 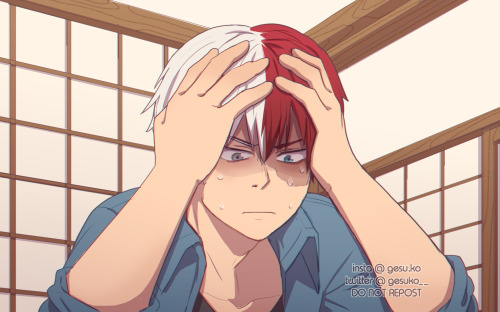 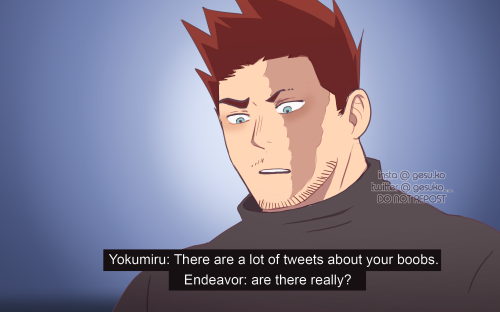 They broke as hell

jiro: when i was little, i wanted to become a rockstar

kaminari: you mean when you were even shorter?

kaminari: you must be wondering why i’m taped to the wall