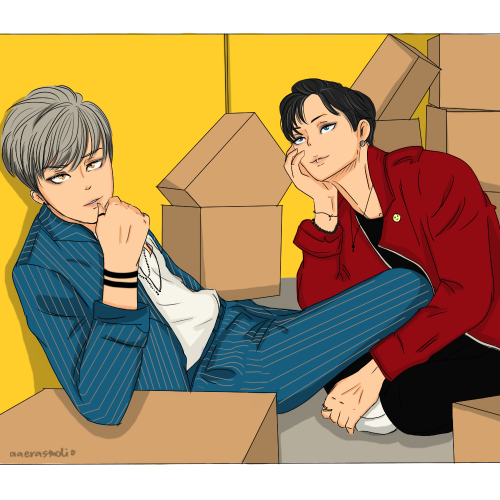 bokuto koutarō’s laugh echoes amid the fogged air. it’s almost entrancing to the nearby listeners, despite the boisterous behavior it rings in. there’s a sudden rise to his chest, before a repeated pattern of huffs. you’ve found yourself in the comfort of his laugh once more, just like you’d always been.

“it wasn’t that funny.” you tell him, shoulder brushing against his. there’s a sudden imbalance to his step, yet he’s ignorant of how it affects his walk. “it is funny - it still is!” bokuto’s voice rises among all other distractions once more, reflecting off a childhood memory you both shared.

you can still remember the same laugh, slightly pitched then. his short figure composed of clutched arms to his stomach, as you kept slipping off the patch of ice beneath your feet. you felt miserable in the moment, before his assistance of a piggyback ride carried you back to your home, back to your warmth, where he was with you.

I wrote a fluffy BokuAka fic that I wanna share!

Akaaaashiiiiii sometimes he really can be too much 🥲

Please do not repost, just reblog! I am on other platforms with the same username.

⟶ ‘I did an oopsie’ MSBY story mode

FORMAT: Half social-media, half written

GENRE AND WARNINGS: Manga spoilers (timeskip), SMAU, romance, bad attempt at humor, cursing, tags will be updated as it goes

TAGLIST: Open, send me an ASK to @osamusstraycat​​ ! (Please let me know if you change pseudos or want me to answer privately)

I DID AN OOPSIE MASTERLIST

❝When you are trying your best to live normally, pining over a certain volley-boy… but you accidentally tweet on the wrong account and now you have to face the consequences. What will you do when not one but THREE guys get confused over who you love?❞

Our next writer, @lalikaa , is doing a future fic! Kuroo probably looks back on his volleyball years fondly. 🏐  Which plays do you think makes him the proudest? 😊

akaashi: ive had such a horrible fucking day

akaashi: so god help me i will kill the next person to talk to me

bokuto: AKAAASHI HEYY!! CAN YOU- 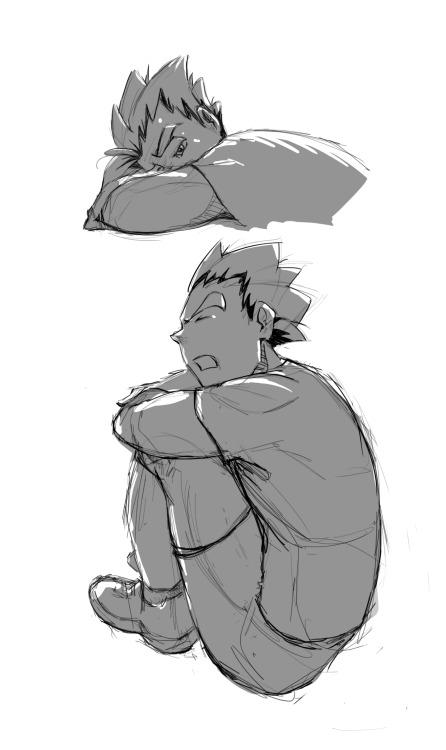 #bokuto koutarou, #haikyuu, #haikyuu!!, #hq!!, #art, #digital art, #i want to see him happy as much as the next person but his pout is cute
16 notes · See All
olsenholicText

request: Hello! idk if your accepting requests rn but if you aren’t please ignore this! But can I request a hc of Kuroo, Bokuto, Iwaizumi and Daichi with a s/o that passes out from seeing blood? Or just anything that would seem graphic they just tend to pass out easily. Thank you very much ! :)) - anon

a/n: ahh i get disgusted when i see other fluids (not particularly blood though) so i completely understand this !! i also have a friend that would actually pass out whenever she saw blood so i have first-hand experience from this lol. hope your day / night is going well ! 💘

kuroo, bokuto, iwaizumi, and daichi with an s/o who passes out from seeing blood

Bokuto gives head with so much enthusiasm you just gotta lean over and say “is it bussin?”

#chill bruh ain’t nobody gonna take it from you, #Bokuto x reader, #after hours., #Bokuto Koutarou
27 notes · See All
tiggerpilotVideo

𝐀𝐊𝐀𝐀𝐒𝐇𝐈 𝐊𝐄𝐈𝐉𝐈 never forgets to give you the little pushes you need. it might seem blunt at first — the way he tells you to stop procrastinating and work. you believed him to be like the others, till you realized that it was his care and affection tht guided you through the hardest times. gentle words weren’t much, but support and involvement in helping you was constant. he wasn’t the other half you needed to give you a push — no, he was the other half that melded itself with you to take a collective step ahead. ♡

𝐁𝐎𝐊𝐔𝐓𝐎 𝐊𝐎𝐔𝐓𝐀𝐑𝐎𝐔 has never once forgotten to text you goodnight. insensitive is how you’d heard of him before by most — yukie had mentioned him always forgetting to give back things he’d borrowed. you hadn’t expected much since then, but the same text pops up every night before he sleeps — “good night ! <3” it’s barely two words along with a heart — something done so effortlessly — yet its the action of consistency that makes you feel like he truly cares about you. ♡

𝐊𝐎𝐍𝐎𝐇𝐀 𝐀𝐊𝐈𝐍𝐎𝐑𝐈 never forgets to compliment you every day, whether it be in the form of a miserably failed flirt. his words are sly off his tongue, and always happen to capture the beat of your heart and make it his. you call them unnecessary — the way he raises his brows and proceeds to ‘swoon you’ with his ‘charms.’ you always thought of them as nothing much, but then you realized that was his form of telling you how beautiful you were, without breaking down into a flustered mess — quite harmful to his ego. ♡

𝐒𝐀𝐑𝐔𝐊𝐔𝐈 𝐘𝐀𝐌𝐀𝐓𝐎 always smiles at you whenever you happen to look at him. there’s almost never the glint of disinterest in his eyes as you turn to approach him. you’d seen a few others do so — barely bat an eye at you when you spoke — it was a feeling of hesitation that grew in your chest. however, sarukui had never made you feel like that. his attention was always with you, whenever you needed it, and you could tell from the quick curve to his lips at your entry. ♡

bokuoikita or oikawa with his black and white hair dyed boyfriends.

Thinking about the important things

i’m not sure if i got this quite right but i hope you like it anyways!

synopsis: a social media au where a college student y/n desperately needs to interview the famous setter and captain from fukorudani academy for her final project, that one of them is akaashi whom she ghosted 2 years ago.

TAGLIST: bold usernames means they can’t be tagged. please send me a message or ask if you wanna be added! :3