Imagine a new immortal being an old lady. Literally a grandma who died sometime in her 70s in a non-natural way. Imagine someone who has more normal life experience than the rest of them suddenly joining the group. And she’s going to Grandma everyone and the gang (minus Nile who had her own grandma and misses her) don’t really know how to react to this, because they’re all old enough to be this Grandma’s grandparents by many times over, but at the same time they can’t really argue because she has that old lady attitude that cows them a little (and also maybe it feels nice to have someone treat them like this).

And also just how perfectly it would work out for them. Maybe this old woman can’t join their group and be a soldier (although maybe she’s a badass old lady who knows her own tricks), but she’s the perfect person to run a safehouse for them in whatever city. The Guard can’t stay anywhere for too long because it gets suspicious when you don’t age, but no one’s going to question an old lady not aging because she’s already old! And if she’s running a safehouse then the Guard can just pretend to be visiting their grandma and lie low for awhile (and also, someone pretending to visit their grandma is less suspicious than a group of randos just hiding out in some random place and not interacting with anybody for however long). And how nice would it be for these old-as-fuck immortals to have someone to go to and take care of them as if they were her own grandkids every so often?

#I think it'd be nice if they had someone whose maturity had developed naturally to watch out for them#also they'd be like 'ah our grandma ellie :) such a sweetheart' and then she'd reveal that she killed her abusive stepfather back in 1950#developed naturally as in developed as a normal growing person's would not developed over hundreds of years of war and fighting ykwim#the old guard#the old guard au#the old guard prompt#andy the scythian#yusuf al kaysani#joe al kaysani#nicky di genova#nile freeman#booker#quynh#i'm saying  stuff
14 notes
crownedguinevere
Text

Weirdly, my favorite character is Booker. Like yes, I know he betrayed his immortal family because of the guilt from the death of his family that he couldn’t get over so he thought teaming up with a Copley was a good idea which lead to his family being tortured BUT I think he’s like one of the most well developed character (in the movie, I haven’t read the comics yet) because you get to know his backstory and his emotions

I feel like Booker would make a good full on Villain (betraying his family doesn’t count because they got reeled in and Booker didn’t do it to them on purpose), like not those crazied ones more of an angsty one

angel just played, like legitimately wrestled, with booker for the very first time. she’s played a few seconds of tug and played fetch simultaneously with him before but she’s never actually play bowed and wrestled with him. lasted a good ten minutes before she was done and jumped up on the couch, but booker was thrilled.

Joe: Did you even hear what I said?

Joe: What did I say then?

Joe: Well, if you insist 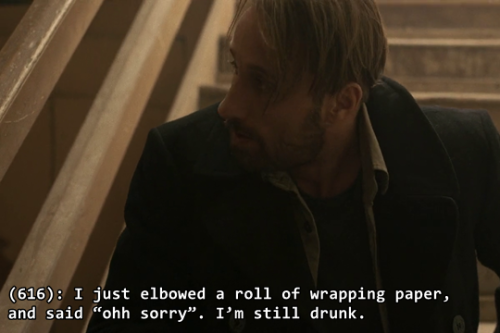 Nicky returns from a mission and the long delayed conversation is held. Booker has a solution that leads to a hard fought and fragile agreement.

Andy is just relieved they got their shit together.

“You know,” Booker said thoughtfully, at their weekly progress review. “When I said ‘try to get along with your bodyguard’, I didn’t mean ‘draw him in twenty different ways’.”

Booker turned the sketchbook around. Nicolo, lovingly rendered in strokes of charcoal, stared back at him.

Booker flipped to the next page.

“Some warmup sketches,” Joe tried weakly, but he was sweating now. Just how many had he drawn? It was difficult to keep track when the lines of Nicolo’s small smile, his hands, begged to be committed to paper.

Booker looked at him sceptically.

“You’ve got your Brandhorst showing in less than a year now,” Booker said. “Unless you want to explain to them how a study on the human condition turned into the study of one hot dude, we need to be looking at something other than twenty pictures of your bodyguard this time next week.”

“That’s all I ask for,” Booker said. He handed back the sketchbook, which Joe definitely didn’t hug to his chest. “I didn’t expect you to get along so well with Nicolo,” he added, assessingly.

“Alright, let me rephrase,” Booker said. “I didn’t expect you to fall for your bodyguard in less than a month. Especially when you spent the first week of it hating his guts.”

“How is that better?” Booker demanded.

A continuation of this AU because things are just coming to me. Also, again, the original idea wasn’t mine, but I’m having difficulty finding the original post. If it was yours, please let me know and I will make sure everything is credited.

Here is the original post by @veryoldmuchguard, and thank you @you-dropped-your-forgiveness for linking me!

say what you want about the old guard but it was extremely cool and sexy of greg rucka to be like hm. what if there were a handful of extraordinary immortal individuals who work together to try and make the world a better place, and get this. they’re all gay, because that’s just what immortals are like,

hello world! I’ve been writing again. This time for The Old Guard, specifically focusing on Booker, my favorite depressed dumb bitch boy. So maybe take a peek if that tickles your fancy.

Woke up thinking about The Old Guard. Enjoy, I guess:

Nile’s sword arcs out of her hand and onto the ground several feet away for the third time in as many minutes and she leans over to brace her hands on her knees, breathing hard.

“How are you so good at this?” she asks.

It’s a mostly hypothetical question. Hundreds of years of practice ought to make someone frustrating adept at swordplay.

“Ah,” Joe says, grinning, “while you were busy being heterosexual, I studied the blade.”

It takes Nile a second.

“She is also not heterosexual, my love,” Nicky says from where he’s sitting in the shade with a book. His tone is lightly chastising. “You should not assume.”

“Oh.” Joe looks genuinely surprised. “I apologize. Are you not?”

Joe considers this for a moment. “Bisexual?”

“I see. Booker is as well. Though it took him a few decades to realize.”

“It took him a few decades to admit,” Nicky argues. “I think he realized rather quickly, sharing such close quarters with us.”

Joe spreads his arms as if to prove his innocence—though “innocent” is difficult to pull off when one hand has a sword in it.

“Nicolò is very pretty and makes equally pretty sounds given appropriate…stimulation. I was not responsible.”

She’s sitting on the opposite side of their little courtyard cleaning a rifle.

Nile hadn’t understood, at first, why the group was so adamant about renting a home with a private, stone-walled, garden. After sparring with them for a few weeks every morning, healing countless wounds, some of which might have been fatal for a normal person, she gets it now. And that’s aside from Andy’s fondness for dismantling and reassembling weapons while sunbathing. Privacy is important.

“Regardless,” Nicky says, “are we using queer, now, as a term? Is that no longer derogatory, Nile?”

“Mm,” Nile says. “I mean. It’s still derogatory when some people use it but it’s also been pretty widely reclaimed. There’s a whole like, genre of scholarship called queer theory, now. You can get a degree in it.”

“Interesting,” Nicky says, tapping his book against one thigh.  “We should go to college again. We haven’t done that in a while.”

Nile looks back and forth between them. “You’ve gone to college? Of course you have. Better question. How many degrees do you all have?”

“Three in biology,” Andy says, not looking up as she scrubs the bore of her 338 Lapua. “Two in microbiology, one each in chemistry, cognitive science, astronomy and astrophysics. One in ecology. And one in music.”

“Not just music,” Joe objects. “A degree from Juliard. Have her play the piano for you some time. Or the violin.”

Nile feels a headache coming on. “And you two?”

“Joe has two bachelors degrees in studio art,” Nicky says, “a PhD in art history, a masters in art conservation, and a law degree. I have a bachelors in English, a PhD in religion, a doctorate in medicine, and a masters in medical ethics.”

“Ah, my heart. I apologize. Nico attended culinary school three times. But he only graduated twice.”

“We could,” Joe suggests.

Nile groans and retrieves her sword.

“Keep your elbow up this time,” Andy says, still not looking away from her gun.

Booker: Oh, my word. Have you seen your hand?

Nile: What about it?

Booker: It’s very pretty. I would like to have it… in marriage.

i feel like there’s a lot of unexplored potential for the old guard’s dungeons and dragons campaigns. joe as dungeon master always has something new cooking up like suddenly there’s a week in a safe house with no wi-fi and nile is like damn what are we gonna do and joe gets this manic gleam in his eye and runs to his bag to get his notebook like “it’s no problem at all we goin on a fucking adventure this week ladies” and andy hiding a smile is like “look what you’ve done nile we’re in it now” and nicky is getting weird dice and snacks and booker is digging through what looks to be a costume chest and nile is like???? vaguely remembers hearing about a d&d club in high school and is skeptical but goes along with it and before she knows it the hours are passing and everybody is having so much fun. andy and booker always come up with the most outrageously complex backstories for their characters that involve being star-crossed lovers who dramatically monologue at each other with new secret tragic backstories coming up constantly and nicky always works little aspects of he and joe’s past into his character motivations and wistfully refers to the cute bard waiting for him back home. nile fucks with it but by the third day when nicky is standing on the table swinging his actual sword around shouting tongue twisters to confuse the evil british big pharma rep dragon that joe says with a straight face was not inspired by real life so that andy can slay it with her axe while andy and booker beat their fists against the table and whoop in encouragement she realizes oh. i have joined an army of immortal nerds 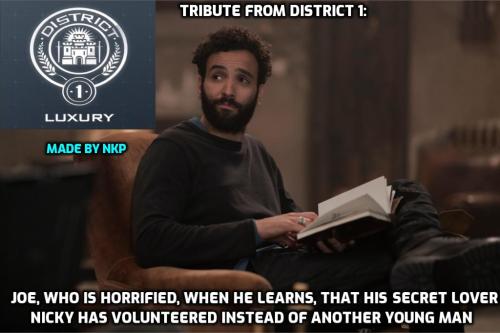 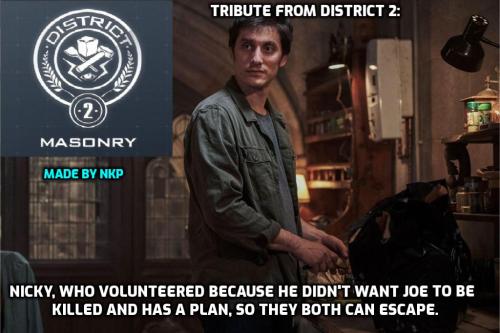 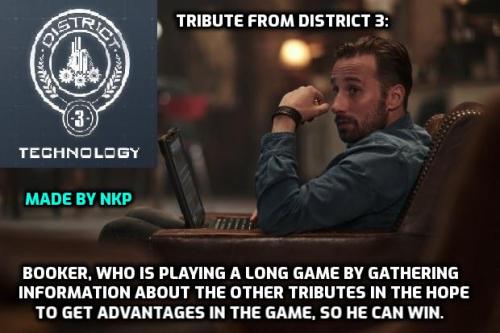 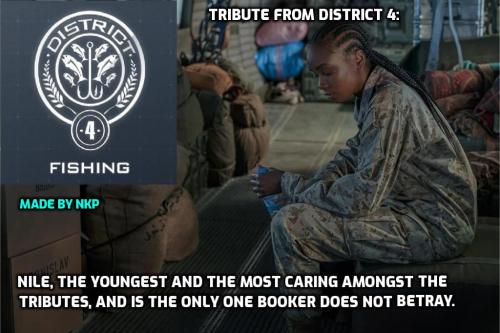 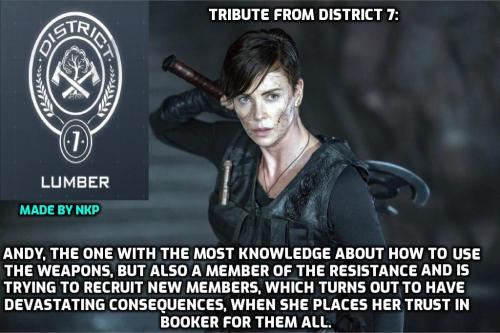 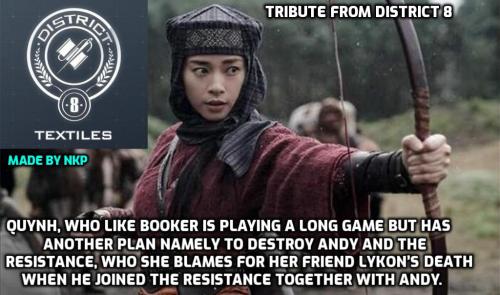 (815): I often wonder if we’re introverted extroverts, but I don’t think so. I think we’re just easily tired scumbags 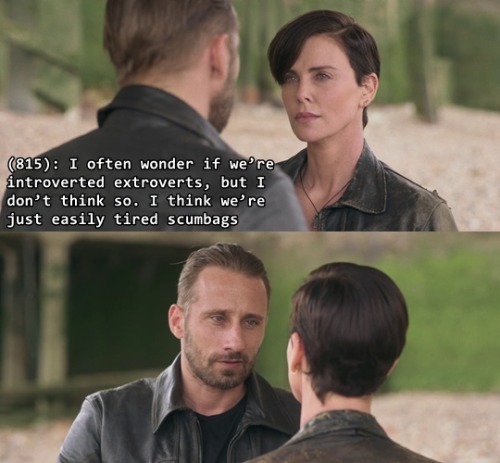 (812): He fucks strippers and doesn’t have a life plan. Of course I’m going to regret this