Bruce falls in love with Thor’s bubbly personality along their adventure. Thor tries to talk to Loki but he gets scared and accidentally freezes Thor’s heart. Thor saves both himself and his brother when he stops Loki from getting killed, breaking the curse with an act of true love.

Even though things are great, Loki starts hearing a voice so he and Thor and Bruce go on another adventure where Loki finds out about the source of his ice magic and decides to stay to protect the land while Thor becomes the king. The two brothers become the bridge between the kingdom and the magic lands because “a bridge has two sides and father had two sons.”

Bruce proposes after days of trying to find the right moment, and of course Thor says yes!!

And everyone lives happily ever after.

The only thing I want from thor love and thunder, the only thing, is more of that sweet, sweet thorbruce content

Bruce: *reaches out a hand to help him*

Thor: *switches all the bags to one hand and takes Bruce’s hand and holds it*

Bruce: that’s not what- okay.

Bruce and Thor during Civil War.

#the rest of the avengers fighting in a parking lot, #while bruce and thor fell in love in sakaar, #avengers, #civil war, #brucethor, #thorbruce, #thruce, #sakaar, #gammahammer
254 notes · See All
vengerthorText 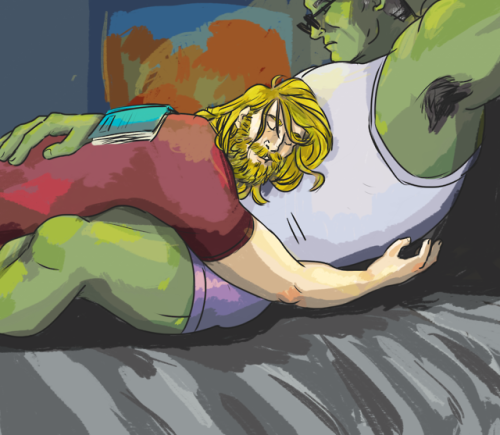 #thorbruce, #gammahammer, #didn't they have a bunch of shipnames, #brucethor, #whatever, #yeah i like to draw people sleeping it's how i cope, #thruce, #thunk, #marvel, #hulk, #thor, #my art
350 notes · See All
urwaaaaaahText

In all of these, he’s looking at Bruce.

Tell me again how it’s not canon.

You know what one of the lovely things about the Professor Hulk scenario is?

For a time, Thor was the one who had it all, and Bruce had nothing. Scraps of a past he’d rather forget and so much misplaced guilt. And Thor would be the one to listen and offer kind words, and strong arms on nights when the nightmares were so bad that words just weren’t enough.

Thor has lost a lot, and almost all at once. And probably no one understands that better than Bruce - the man who could have had everything, only to have it ripped out from under him. Bruce has had time to grow and learn and heal, and to finally bring the two constantly warring parts of himself together. He’s made peace. He can be the man he was learning to be before everything went to Hell. And now he can be there for Thor and make him feel the same way Bruce did on all those sleepless nights, small and safe and protected.

Thor may have been left with almost nothing, but maybe Bruce is all he needs.

#it’s 2:30am and i’m back on my bullshit, #uni’s almost done and i can get back to writing finally, #i really hope this ship’s still going, #thorbruce, #brucethor, #gammahammer, #thruce, #thunderscience, #bruce banner/thor, #bruce/thor, #avengers endgame spoilers, #endgame spoilers, #just in case, #tanja's writing, #tanja’s headcanon
160 notes · See All
dammit-starkText

Thor loves to show off his wedding ring so much!!! He’ll literally be fighting an evil villain on the opposite end of the universe and he’ll stop to explain the midgardian tradition of weddings and how much he loves his brucey and his ring

#the tea: bruce is thor’s trophy husband and thor is bruce’s trophy husband, #thor loves bruce so goddamn much and he does NOT hide it i can tell you that, #theyre cute and the pda is nonstop okay, #thorbruce, #brucethor, #thor, #bruce banner, #marvel, #avengers
206 notes · See All
casual-talesText

I am currently in a bit of a ThorBruce phase, so I wanted to join in :)

Thor finds out about Bruce’s upbringing, unfortunately not because Bruce told him, but because they got in a fight.

Thor didn’t get what the big deal was. So, he was a little drunk! Loki, Brunnhilde and himself went on a little Asgardians-outing and obviously there was beer and mead. He had asked Bruce to join them, but he preferred to stay at home, so there was no reason for Bruce to be upset or blame Thor!

But nonetheless, when he got home, Bruce barely spoke three sentences, no, he didn’t speak them as much as he grumbled them. Normally, Thor would have attributed it to exhaustion, if it weren’t for the almost hulk-like growling and the slight green shimmer on his face.

“Come on, dear, it is not the first time I have been drunk, dear.”

“Excuse me.” He half-heartedly rose his hands.

“Wow, for a man with seven phds, you truly are eloquent”, Thor remarked drily.

If looks could kill, Thor would have been in a tough spot. However, Bruce did not need laser-vision, as the dangerously green pulsing vein on his neck reminded Thor.

their wedding is beautiful

only the characters i personally care about are there (t’challa’s there even though he doesn’t really know anyone and feels awkward the whole time,) carol is allowed to have her really butch short hair, foggy nelson is also in attendance,,, 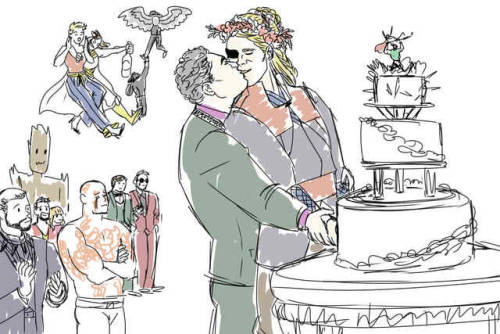 #thorbruce, #brucethor, #endgame, #listen i have a headache today and i wanted to draw something shitty, #this was an excuse to draw outfits tbh, #this was an exercise in self indulgence, #andddd post, #thor, #bruce banner, #hulk, #marvel, #my art
127 notes · See All
comfyterrierPhoto 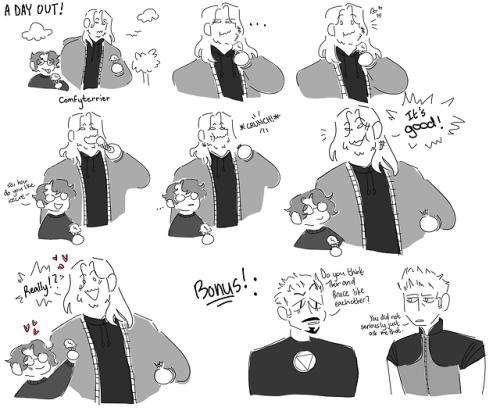 #thor, #thorbruce, #brucethor, #bruce banner, #gammahammer, #that name's so cool, #thunderscience, #marvel, #Avengers, #tony stark, #clint barton, #this is like a date but they don't know it yet, #pre their relationship :o, #i worked pretty long on this so im gonna reblog it later, #maybe..., #but yeah! ice cream date, #this is thor's journey to more modern food like oreos and stuff, #also also, #can you guess what's their flavours?, #i like to think bruce's is green tea and thor's strawberry, #thruce, #terrier draws
338 notes · See All
nomadicbeardText

stony: the OG. Was probably around at the dawn of time. Lives for angst, soulmate clichés and parallels. Needs string to keep track of all the different universes. Trump card in any argument is Earth-3490. You ask for receipts they just start crying and unroll a list that spans seven blocks. “I prefer the comics.”

stucky: knows (rightfully so) that the winter soldier is one of the best marvel movies to date. Likes angst but as long as it has a happy ending. Bucky Barnes did no wrong. Period freaks. You ask them if they’re getting off the bus, they turn to you with tears and reply “I’m with you ‘til the end of the line, pal.”

ironstrange: were stony but jumped ship after it became too angsty. Enemies to lovers aesthetics. Tony stans. Still not quite sure about Benadryl Cumbersnatch’s american accent

buckynat: comics nerds. Has that scene in civil war replaying over and over again. probably Russian.

romanogers: agrees that the winter soldier is one of the best marvel movies. would like to remind that Nat and Steve have been on the run together for the past two years. Power couple. “Sharon Carter is just a knock-off Nat”

samsteve: is in total agreement with the stucky and romanogers shippers about the winter soldier, but would like to kindly point out the power couple dynamics. genuinely just chill people

Bruce wiped a bead of sweat from his brow. Even though the set hadn’t yet started, the room was humid and smelled of cigarette smoke. He hated it. Open amphitheater concerts were what he vastly preferred, but those were hard to come by, especially at this time of year. His November layers lay backstage in a heap, piled on top of his car keys and Steve’s phone.

Thanks! This seems to be the general consensus so it’s what I’m going with. I’ll try and write it tomorrow

I finally finished it!! It’s here!!!! All done!!
I’ve finished the fic i was writing based off an older post; So
As always, if you see any mistakes, or if you wanna ask anything, message me, or send an ask, or just comment. <3 <3

#thorbruce, #brucethor, #thunderscience, #gammahammer, #thundersmash, #fic, #my writing, #i finally did it guys, #are you proud of me?, #its 2am and i cant see properly, #but i did it
38 notes · See All
thorbruce-is-litText

I got twelve notes on my last post, but thats enough encouragement fro me to post an extract of what i’ve been working on. Currently at 3.1k words, i’m not sure if it’ll grow or shrink, but heres something to keep you interested:

{“It’s… amazing.” he breathed. Thor chuckled.
“You’ve said that.”
“But… Look! It’s so beautiful!” Bruce exclaimed, struggling to put his feelings into words.
“You’re beautiful.” Bruce looked away from the breathtaking view to see Thor smiling at him again, and felt all the stress of the past few weeks fade from his mind. He didn’t notice the sadness behind Thor’s eyes}

Feedback is, as always, treasured. Also just any comments at all.

#thorbruce, #brucethor, #thunderscience, #gammahammer, #thruce, #fic, #my writing, #its late, #ive been working on this on and off all day, #it really should be finished by now, #oh well, #what can you do, #thundersmash, #is still a great tag btw
94 notes · See All
bikerfaggotText