Why would you give him ptsd in a fish form?

Now I recall Bruno kept his parents’ house as he told Trish, but I think he never visited the house after his father death. The house just stood there, and he was willing to go back and reopen his closet, but only for Trish. 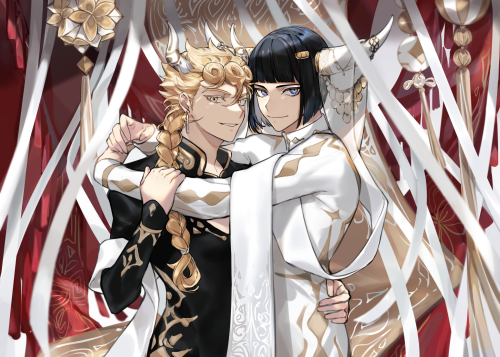 Bless @bisexualsmackingnoises for this comp, it gets me through the day more than you know

thank u for the ask!!

a: what i think realistically: bruno was really close w his dad n enjoyed when they got to fish for leisure together. one of if not his earliest memory is fishing w his dad

b: what i think is hilarious: bruno was a little feral wild child thing that ran around shoeless catching minnows w his hands n climbing trees n shit. definitely did not seem domesticated till he was at least ten years old

c: what is heart-crushing and awful: the manifestation of sticky fingers as a do-everything, fix-everything, applicable everywhere stems from bruno feeling helpless as a child bc of everything that happened to his father n having to raise himself from a young age. it only feeds into his complex abt taking care of everyone else n forgetting himself so he feels like he has some kind of purpose instead of being a mistake

d: what would never work with canon but i believe it anyway: bruno autistic n chronically ill :> he has chronic pain

send me a character for a/b/c/d headcanons! 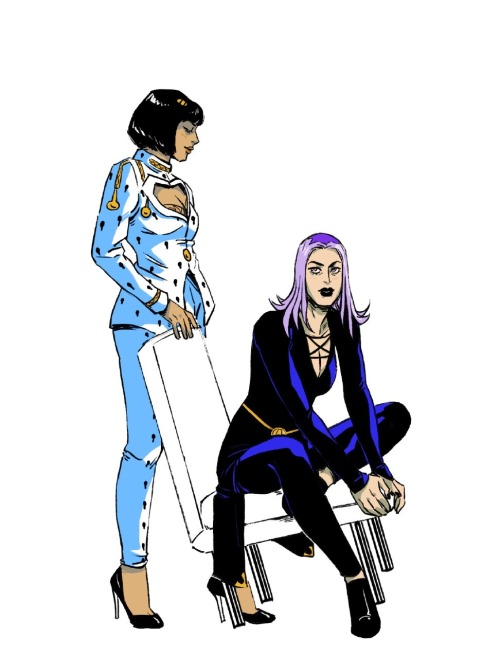 the b in lgbt stands for “bruno bucciarati beating up biphobes”

Hey! So I’m still pretty new to a lot of posting on Tumblr but, I have thoughts about the entire cast of VA and I needed to at least make a hc post before I really start writing more on them.

Keep an eye out for other hc lists, I’m pretty sure I’ll be making a La Squadra list and a Team Bucci list when I get more time!

This was my first attempt at finding my own style. I can see a lot of flaws, including the tiny feet :| But I still think it ended up looking quite good, and he looks very 𝓹𝓻𝓮𝓽𝓽𝔂. I also like how the flowers turned out! Could anyone give me any tips on coloring smoothly and taking pics of the drawings? I would appreciate it!

I don’t draw fan art on such plots of story at all and I don’t have the habit of shipping characters, but for the sake of curiosity I decided to draw some pictures to see if it’s true that such topics attract more attention and fans like it.

I’m unlikely to continue this in the future. This is unlikely to be my guilty pleasure, haha.

people living deeply have no fear of death, final chapter ~

Bruno doesn’t reach for him. Just stares at him for a long time, and even in death his eyes are a brilliant blue. Slowly Bruno raises a hand, fingertips at his sternum, and then he unzips his chest, movement slow and precise. Guido isn’t sure he wants to look. Isn’t sure what he could possibly see that would calm him.

The flesh is still red, and the organs aren’t bloated or discolored, but his heart…

His heart isn’t beating. It just rests there, as if on display, as if it’s nothing but decoration. A set piece.

Bruno shrugs, staring down into the cavity of his own chest. “At least I’m not rotting.”

Something breaks, then. Guido isn’t sure what. He’s reaching for Bruno, and he doesn’t care, doesn’t care if everything is different because Bruno is still here, and he can touch him. Can hold him. Guido bows his head, resting it against the open chest, and Bruno doesn’t even flinch.

“Fuck me. Fuck this.” His voice is nothing but a cried-out rasp, but Bruno strokes his head, fingers slipping beneath his hat – the touch of those fingertips cold. “Whatever happens, don’t leave me.”

Bruno only hums in reply at first, fingers tangling in Guido’s hair. “I’ll do my best”

And Guido loves him.

He loves him like a lazy morning in bed and a late evening out at sea. He loves Bruno with his unblinking eyes and quirky smile and bizarre sense of justice. He loves this man that is too stubborn to die, and Guido thinks those words, he thinks of love, is overwhelmed by how intensely and hopelessly he loves… but goddammit he’s a coward, and he doesn’t say it.

the final chapter. boy howdy. canon compliant is the saddest timeline. everything Guido Mista lives for dies, and yet he has to keep on living - here come the angst ~

There is something that everyone does. Everyone. Sooner or later. For some reason.

The lipstick. You know what I’m talking about.

Jonathan and Erina found each other again and I decided that maybe Jonawagon wasn’t the best idea. Speedwagon stopped Will from crushing his hands on that door and I knew I was hooked.

Hol Horse shot Avdol and I stood up and yelled in rage. Avdol came back, and I felt his happiness and I knew that I wasn’t gonna forget this in a hurry. Avdol died to save Polnareff a second time and my soul left my body.

I watched part four, and an idea started to form in the back of my head, but I didn’t say anything, because I didn’t think it was worth it. And then Okuyasu died. And I mumbled “I think I ship it” out loud and my watch buddy silently punched the air. And then Okuyasu came back and I realized I’d cramped my hands from holding the chair so hard.

Bruno Bucellati wanted to make sure Leone Abbacchio was safe before anyone else on that boat, and I heard the music and I wondered. And kept wondering. And then Abbacchio made his little speech by that boat and I simply sat back and allowed myself to be consumed by the void.

Giorno saved Mista’s life and proceeded to speak about how bright and shining his resolve was, and I got so distracted by that that I nearly missed the sex joke that comes right after.

Tiziano and Squalo existed on screen for more than two seconds and I pointed at the computer and said “HA! Gay.”

I found out that apparently, that hamon trainer dude calls Joseph Caesar’s girlfriend in the Italian dub, and I decided that maybe Battle Tendency was worth a rewatch.

Kakyoin and Jotaro locked eyes during that particularly tense moment when they had to pull that fleshbud out, and I had to kind of glance at my friend to make sure he was seeing what I was seeing.

Jolyne risked her life to save Hermes within like the first hour of screentime (should Stone Ocean have been animated yet it would have been an hour) and I, who had already heard about the Prison Lesbians™, was intrigued.

Moral of the story is, uuh… These bitches gay?