Trending Blogs
#but I will answer them~
seboostian-artText

Going to answer the rest of the asks before I go to bed. I need an hour or two more to feel braindead after today’s boring work day. Haha.

#x'D, #I'm SO tired, #but I will answer them~, #I'm really glad people still love Magpi~ ; w;, #I need to give him some love with a quick sketch, #seb talks trash, #seb is tired
0 notes · See All
thestudentprincesssText

#that being said i think i need to answer messages a bit later rather than now, #but i will answer them~
3 notes · See All
tsum-tsxmusAnswer

#delete later, #i hvae 2 left but im having a hard time figuring out how i want to answer them :/
0 notes · See All
pynkhuesText

I think I might make tomorrow another day where I answer asks. I feel like it’s been a while and my inbox is p full again, hmmmmm.

#i miss answering them, #i've just been so crazy busy lately, #i feel like i've had no time to even think, #and the little fandom energy i've had has been directed at re-watch, #but!, #i have a bit more time again for a couple of weeks, #so it'd be fun to get back into things
0 notes · See All
lilacautomaticText

#The immediate pained reaction Hakuno has to finding out he's forgotten about her, #her realizing exactly how much she's come to trust him even though he's a piece of shit, #the way Gil calls out her name when she gets hurt even though he later admits he didn't commit her name to memory, #his attachment to her having become ingrained into his very instinct, #how Hakuno allows her body to be torn apart in order to reach him, #she literally almost kills herself to get that asshole back, #and how at the very last second Gil saves her from being destroyed by BB even though it's against his self-preservation, #she calls out to him and he answers her, #and they finally stand on equal grounds as Master and Servant with him allowing her to use his NP, #POETIC CINEMA!! Poetic cinema, #also he says he's gonna give her candy and that's just really cute, #sorry for the rant I just have intense feelings about them, #mine, #fate
2 notes · See All
heliodeanAnswer

It REALLY shook me. I have never seen anything like that from either of them, and I feel like I know Dean especially better than I know myself.

It’s like I said here, Dean is so turned around by Chuck’s manipulation, by Billie’s, that he doesn’t know which way is up at this point.  He wants his freedom more than he wants anything in the universe, and he is so worked up in his fear and his rage and his hatred that he’s willing to do anything, literally anything, to get it.

His tunnel vision is how Chuck gets his ending, which is why, when Sam breaks through, Dean looks at his gun like he doesn’t even remember getting it out, because it’s the difference between him making the decision and Chuck making him make the decision.  Chuck’s ending vs. theirs.  Their love vs. their fear.

It’s so powerful, for the big bad to be playing his games with their fear, never taking into account not only their love for one another, but their love for their family.

#im crying thinking about this i love them so much, #roadworkahead-404, #spn, #spoilers, #spn 15x17, #lilly answers
11 notes · See All
justalittlebluetieflingAnswer

Anon, I am all about this! I can totally picture Beau and Yasha walking off together thinking they’re being subtle and Jester and Fjord catching it and making eye contact. And then it slowly changes into something slightly awkward and charged, because well, like you said, that could be them. They’d both so happy for Beau and Yasha and the conversation would start off totally innocent and almost immediately veer into dangerous territory.

Ha. In a situation like this, it would lead to a moment where they’d almost kiss for the first time and end up being interrupted by someone. And then one of them would have to leave the room. Cue longing looks and more mutual pining.

#but that is also something i'd like to see, #one of them about to make a move and then someone else interrupts, #so it's awkward again, #idk why my brain wants to drag this out so long, #i can't help it, #fjorester, #critical role, #the mighty nein, #anonymous, #erin answers things
14 notes · See All
elekathehedgehogText

#i contacted the people who reposted my art, #neither of them have responded, #it's been a couple of days already, #and they've been active around the time i contacted them, #but they haven't responded and it's kinda stressing me out a little, #they haven't taken it down either, #and i can't tell if they actually haven't seen my messages or are just ignoring me, #i don't wanna report them or anything but if they don't answer i might have to, #and even then that doesn't guarantee that the posts will be taken down, #i don't feel like i should be so stressed out about this but i am, #ugh, #negative, #ramblings, #don't rb, #don't see why you would but just in case
0 notes · See All
wormweebAnswer

#sam as in awesamdude, #can you tell ive been reading dreamwasfounds samnotfound posts, #yeah <3, #i think its kinda hard to assign evil simps to irl mcyters cuz like. so many of them are uncomfy w shipping, #but this au is mostly a joke anyway, #and if its george's 7 evil simps then like ? thats clearly a joke and i dont think it constittues as shipping so, #idk how apparent it is but im so fixated on the dream / scott parallels and how michael cera is my hc dream so, #lex answers
7 notes · See All
endfghtText

#:knife: plot w me, #tbd, #i hate tumblr ims so much hjeriufsd bc i always open them on mobile and forget to answer them, #if im a lil delayed its bc im tryin 2 focus on writing but jrheuiw im actually      active on disco for once in my life
0 notes · See All
lesbiancrybabyAnswer

yes 😔 i still think it’s worth a watch though!!

#maybe spoilers!! stop reading the tags if u dont want spoilers!!, #all things considered i would say it's still a happy-ish ending for them, #bittersweet maybe but its not all tragic imo, #answered, #hobm, #hobm spoilers
0 notes · See All
hikari-writesAnswer

#nothing against the furries, #but i do not trust my coworks not to give me shit, #aslo i see those asks ill answer them tomorrow or sunday
2 notes · See All
icecurseText

@copycaat​ groused: “Why is it when you speak, you sound like a sane person, but as I look around here all I see are products of madness and degeneracy?”

it is cold and raining lightly — misting, really, to haku’s vague disappointment — but the rooftops outside the kitchen window are empty. haku loves overcast days like this. the closest approximation to fog that konoha gets sweeps low over the tops of trees, the village’s incessant sprint slows to a hurried walk, and the fire country natives grasp frantically at umbrellas, books, jackets, and clipboards as barriers against the rain like one of haku’s pet scorpions.

when they’re in one of their funks, haku likes curling up in the window seat with a cup of sakura yu and watching them run. not maliciously; it’s just funny. they run like they’re afraid of melting. they are. they should be.

of course a shock of silver blocks their view, a familiar crinkle leaning into haku’s eyeline. “Maa, Haku-kun,” kakashi drawls, knuckle rapping against glass. “Spare a towel? I left mine at home.”

for a split second haku thinks, That is nothing. That means nothing. then they think about ignoring him. no, he will simply knock until they’re fed up and the melancholy vibe will be ruined and then how else will haku vaguely interact with the maudlin veil draped over their eyes?

❛      It is raining snakes and frogs,      ❜ haku unlocks the window and waves kakashi indoors, eyes narrowing as kakashi’s shoulders tense like a wet dog seconds before he shakes. ❛     Sai-kun painted that,      ❜ they tip their chin toward the painted scroll hanging behind kakashi. the warning in haku’s eyes stops kakashi in his tracks. ❛     Stay here.” don’t touch anything. ❛     I will find you a towel.      ❜

it only takes a few moments — haku has a number of fluffy, absorbent towels; with the way water clings to them sometimes, it’s a necessity — but of course when they re-enter the living room kakashi is strolling about, running his eye over the scorpion terrariums, the kitchen table messily draped in scrolls and anatomy books and makeup and paquettes of home-made poisons, the empty rabbit hutch in the corner with the tin of non-toxic varnish at its feet, glittery hairclips and an old, battered steel sword, too many candles for a normal person, the small forest of house plants and an icha icha volume or two.

kakashi picks up an icha icha, examines the origami flower bookmark poking from its pages, and slips it back inside before setting the book down with the most care haku has ever seen him handle anything. “Interesting.”

❛     Thank you.      ❜ haku tosses the towel to him with shuriken precision. kakashi catches it effortlessly and unfurls it lazily over his dripping hair, still regarding haku with that same lazy expression.

“I never said it was a good interesting.”

❛     Quality has nothing to do with interesting,      ❜ haku’s reply is as mild as the tea they return to sipping. curling back into the windowseat, haku doesn’t bother looking back at the man. he will get bored soon enough.       ❛     A present left on your doorstep and an unexpected disappearance are both considered curious. How you feel about them means nothing. They must only be strange.      ❜

“Huh,” kakashi says. huh. “Haku-kun, why is it when you speak, you sound like a sane person, but as I look around here all I see are products of madness and degeneracy?”

change. they like that. something inside them craves that.

❛     Does it matter?      ❜ haku says evenly, blowing the steam from their tea and glancing at kakashi over the rim. is kakashi getting bored of their little chats? haku is. interesting. interesting.  ❛     How I am now has nothing to do with who I will be next.      ❜

#idk what it is about you kakashi but u consistently catch the worst of them.... oh wait.i do know. <3, #*thinks about wolves* *thinks about dogs* *thinks ab, #haku and kakashi are the type to have a conversation that is two lines: 'strange weather.' 'yup.' idk what that means I just know it's true, #❛ CIPHER DIVISION  /  ( answered asks )
4 notes · See All
puppetmaster55Answer

it does not, unfortunately. it does, however, have natural lighting, seeing as one side is window-facing

#puppet answers asks, #I don't have string lights really. or any way to string them up if I had, #it is unfortunate I know, #Anonymous
0 notes · See All
himbosimsPhoto

my porchlight it now off! come back later for more treats! 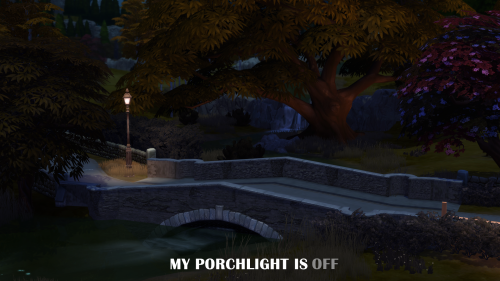 #hopefully ill have the light on in the morning, #again itll be awhile before i can get through all the asks as i will be working, #but i will answer them as i can
4 notes · See All
hikari-writesAnswer

more like im the one who did something to myself 😀🔫

#a LOT of mcs are annoying asf to me, #i could make a list out of everything that annoys me abt them 😭😭, #but i wont bore u with them dw <3, #jade answers
2 notes · See All
Next Page