Who gave him the right to be such a cinnamon roll?

That’s ju-just badass. Running up the stairs at 5% OFA, bullet timing, then being quick enough to avoid them, frigging jumping from the stairs, to the walls of the stairs, to drop-kicking one of the gunmen, then jumping onto the wall, then to the adjacent wall, then hecking gut punching the other gunmen down the stairs. All of this while avoiding machine gun bullets. He’s ju- this is All Might levels of badass.

#badass, #bnha two heroes, #melissa shield, #izuku midoriya, #deku, #izuku, #my hero academia, #boku no hero academia, #gif, #oh my god he was wall jumping, #am I the only one wishing todoroki and bakugou were there so they could see how badass deku is tho
16 notes · See All
redrobin-detectiveText

I don’t normally do individual fic reccs but this fic The Disappearance of Midoriya Izuku by town_without_heart has left me shaking with awe and I’m still blown away hours after reading it. Note that the series is unfinished but boy oh boy is it good.

“Fifteen years ago, a boy disappeared. Ripples in the water, the butterfly flaps its wings, and everything changes.

The notice is unremarkable, one face lost among a sea of lost faces. It is a yearbook photo of a young boy in his school uniform. His eyes are wide, shadowed by dark half-circles. His hair is green, wild and curly. He does not smile as he stares into the camera, and the somber expression makes him looks far older than his purported thirteen years. The text below the photo reads: HAVE YOU SEEN THIS BOY?”

This fic is not for everyone: its got a major character death, Izuku being pushed to the breaking point with questionable morals, some torture, some mutilation. But the story! and the storytelling! I was riveted the whole time I read it and could hardly put it down (I was at work and I *never* read fic at work so that shows you how INTO IT I was). Give it a shot if you’re interested and then give the author some love!

#fic reccs, #Im still thinking about this, #Izuku is such a badass but ???, #Its hard to explain unless you read, #we never *see* Izuku, #its the investigation following his breadcrumbs but hot fucking damn, #absolutely engaing, #could not stop, #maybe if we give enough love we could get some resolution??, #I need it (i need it)
40 notes · See All
syblatortuePhoto

he’s not down yet 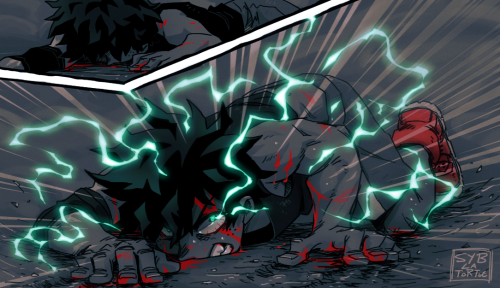 #Midoriya Izuku, #bnha, #in case it wasn't clear already I love one green bean a lot these days, #I have feels for this fierce boys, #he is very cool and badass especially when he's hurt, #nnnnnggh, #I want to hurt him emotionally too, #next time maybe
1K notes · See All
dezuyaText

this is an izuku love blog