Tumgir
AboutPrivacy Policy
AboutPrivacy Policy
Visit Blog
Explore Tumblr blogs with no restrictions, modern design and the best experience.
Fun Fact
40% of users visit Tumblr between 1 and 30 times a month.
Trending Blogs
#but that's not . . . the root of the issue
jewblog
Text

this was something my mom and a friend were talking about a while ago that i keep thinking about….it really is entirely inappropriate for any government to define “marriage” as anything but a civil union not because of the arguments for same-sex marriage or anything related to it but rather because extending marriage equality to (able-bodied) gay couples just expanded a fundamentally religious institution that has no place in a government that claims (protests, insists, lies) that it cares about freedom of religion? imo?

#and i know in america we're very lucky in that we have the option of civil (that is irreligious) marriage#as well as legal interreligious marriage#because i know people with access to neither of those options should they want them#but that's not . . . the root of the issue#azriel.txt
11 notes
ariadventures
Text

I think that I might not like sunsets. Does it make sense to feel melancholic about short days and long nights after the winter solstice has already passed and the days are gradually getting longer again? Especially when I’m already partially nocturnal and usually wake up later in the afternoon. Something about sunsets feels particularly lonely.

I have high anxiety days and low anxiety days. High anxiety days are marked by feeling rough around the edges and impacted by every small thing in the day that doesn’t even seem to relate to anxiety, such as the thought ‘sunsets make me lonely’. What a ridiculous concept/thought! It wasn’t until I typed it out and read it back to myself that I realized I should probably take anxiety meds. Still, it helped to type it out and now I’m already feeling better than I was at the beginning of the post.

I saw somewhere that intellectualizing your emotions and trying to rationalize and reason away your feelings instead of just allowing yourself to feel them was in of itself, a hurtful coping mechanism. As someone who always prided herself on at least being good at introspection, the realization that I’m still contributing to a trauma response like that feels like a setback. All the introspection and thinking out loud I’ve done between my main blog and here have been results of that - which isn’t to say that they were all useless observations. It is a good thing to be conscious of yourself and what makes you react, but you cannot find solace and peace in just knowing why you feel. You still have to let yourself feel it sometimes.

So ironically without meaning to, I started the post one way, aimlessly putting out my feelings, realized in doing so what contributed to it, and then stayed conscious of the fact that the explanation doesn’t erase the situation. So the sunset makes me feel lonely - that doesn’t mean I don’t like sunsets. Being stuck in my own head about what’s going on is an indicator of some anxiety bubbling under the surface that I haven’t been able to pinpoint, but should still try to resolve. But ultimately, I’m still feeling lonely - but that’s okay.

#this is like my thought pattern laid out in a post#I've talked about how writing posts is how I process things because I can't think inside my own head#but I just went through a whole graph of issue > cause > solution > aftermath right here!!#that's rad#I know 'sunsets make me feel lonely' doesn't sound like anxiety#but trust me when I say I'm realizing what specifically is leading me to feel this way that is rooted in anxiety#I'm doing that introspection off camera because that's personal lol#but writing this post helped a lot and put words to my process#introspection
5 notes
spacemaverick
Text

i was in the challenge program/gifted program/whatever all of elementary school so i grew up with the same kids every year with only like 4-6 additions over the years and almost zero contact with the rest of the student body. but in middle school there was only honors classes so we were automatically put in those and it was like okay or whatever but in eighth grade they changed the way they did honors and i cant remember exactly why but i wasnt able to do it anymore and i HATED IT man….. but like it was just my pride being hurt because i’d been in Special Classes For Smart Kids Only for my entire life and that status was taken from me. also i failed algebra in eighth grade because i never turned anything in and i was so fucking mad. not because i failed but because now i was at the “same level” as other kids my age. i was so bitter in ninth grade because i’d already taken this fuckin class and in my head i was supposed to be a year ahead of everyone At Least but it meant i got to have my favorite teacher ive ever had for two years. so it worked out well or whatever

#fennec talks#i have a lot of issues rooted in my identity as 'smarter than other people'#like factually i am an intelligent person and i learn quickly a lot of the time. but ffs thats not a personality trait#and iq is bullshit anyway. it do not matter
1 notes
edward-snowdenhands
Text

Gently freaking out bc there’s no internet connection for any computer i log into on half of the floor (and it’s leaving the only other two workers alone??)

#i can't do any work like this#i am an it professional#except i have no clue what's going on here#i don't even know what the root cause is if it's something with ad or a hardware issue#the fact the associates are fine kinda suggests an AD issue#but my account on our new domain is so hamstringed i probably can't do anything#that's the phrase right?
0 notes
an-absolute-travesty
Answer

Gigi posted a picture of Zayn holding the zaby with both their heads out of frame, Maya channeled a combo of both Gigi and Eleanor’s styles with her posts of Liam’s hands cut off at the wrists and of a puppy, Christopher Nolan said that no he wasn’t surprised that Harry, who he hired because he thought he would do a good job, did a good job, and “I think that he risked being almost too subtle or you know, very very real… he’s just a very talented guy,” and today it’s time to have your fan voice be heard! You can submit your requests for Liam’s eight song 1D set list (“songs that are less often seen live”) at his livestream next week via his socials (he will also do a set of his current material and “a glimpse of what’s to come in the future” for the Past Present and Future themed show), and ticket buyers are invited to send in videos of themselves singing along to the chorus of You and I to display alongside Liam during the performance (so I guess we know one of the eight songs, maybe save yourself the trouble of requesting that one.) And here in our own little world, fandom Fashion Archive brackets are up and the voting is on for Harry, Louis and Niall’s best* looks of the past year (is this the only truly fandom-wide activity of the year, uniting all the warring factions in our mutual frustration over other peoples’ taste? maybe so!), and we can all use our blogs to weigh in individually on which of the flood of Larry receipts being submitted and recirculated today we believe in and don’t. All in all, no need for any post-holiday blues with all these wholesome boxing day activities to enjoy!

*as filtered through the voting of the fool masses

#liam payne#Harry Styles#Harry yelling STEPBRO at the people making out- in yesterday's reciept- is a meme thing#that took hold in mid 2019 if that's interesting to anyone for reciept carbon-dating#love the fashion brackets but I suspect Harry's will be heavily weighted by the Vogue dress or the cardigan#trampling whatever they're up against on the way to the final regardless of how good those looks might also be#and Louis' by the H shirt doing the same#probably for the best that voting that same umbro shirt for both of them isn't an option or people trying would really disrupt#but in the end I am always blindsided by the (bizarre) things people choose to vote for so really WHO KNOWS what will triumph#(plus there's always the issue of people voting for whichever Harry look shows the most skin/ is more masc)#I have less feelings about Niall's; I'm rooting for the bomber jacket look but people really like that nautical Bode shirt too I think#HLDailyupdate on twitter bought a fan blog because it had the boys' follows#the only thing strange about them having old fan tweets is that they didn't delete everything when they made it a UA#please use your brains and believe nothing you see on twitter it would save us all a lot of trouble#this is the kind of credulity that makes people believe in garbage like qanon DO BETTER#and believe me when I tell you NO BIG FAN ACCOUNT is any one of the guys. Period. End of.#harry#liam#26 dec 20#wow yep spelled receipt wrong TWICE in tags well OH WELL can't edit now!
159 notes
monstersqueen
Photo

lol ‘exchanging words is a waste of time’ - that’s going to be naruto’s entry in the bingo book. ‘do not under any circumstances talk with him. or let him talk’ 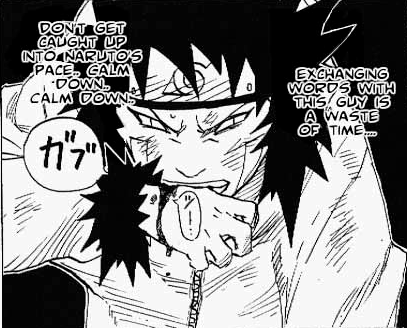 #myposts#if it was ever a concern#military command from opposing armies/countries would fucing hate they keep losing fighters against him#they don't even die they just desert#of course that's assuming they've even managed to start a war#good advice kiba#you get it the only way to fight naruto is to NOT LET HIM TALK NOT LISTEN AND TRY NOT TO GET CAUGHT IN HIS PACE#fortunetely for him kiba doesn't have deep rooted issues that needs unrooting#so this is a rather straightforward fight! no chance of naruto's words turning the world on its head!#how lucky for you kiba you get to just lose to show how much he's grown#rather than lose AND get your very foundations destroyed#naruto liveblog
3 notes
spacepunksupreme
Answer

Come off anon and start dating me then, haha just kidding … unless 👀

Okay in all seriousness gosh this is so flattering, thank you, I love you now anon lol. and really though don’t ever be afraid to come into my dms, I really do love to chat and make friends. That applies to everyone who follows me, not just anon. I love to talk and I am notoriously impossible to annoy, like just dm me about things Ive said in tags or anything, you can send me 30 posts in a row about 30 different conversation topics and I guarantee I wont be annoyed. My dms are a safe space for rants lol

Also thanks to you anon, I wont even have to make a ‘before 2020 is over, anyone wanna admit they got a crush on me’ post at the end of this month, you just checked that box lmao

#wow I saw this last night and like immediately full blush fanning myself flustered hahaha#im soft lol#had to force myself to go to bed instead of impulsively answering this#my favorite thing about this is the ‘based mostly on my own issues’ lol is that not the root cause of all of our crushes?#i can also only assume one of said sexy interests is dune (cuz thats all I talk about lately) which is hilarious#its the exact opposite of that posts thats like ‘im a jock and everybody loves me because i know nothing about dune’#im a nerd and everybody loves me cuz i know things about dune 😎 lol#asks
1 notes