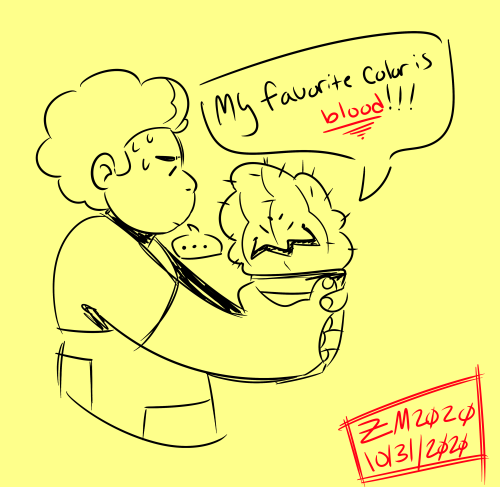 #steven universe, #cactus steven, #su, #steven universe future, #my art, #*stevens voice* i dont think i have ever said that sentence in my entire life, #if my cactus comes to life and demands blood from me im running, #rip to seymour but im different
281 notes · See All
cactusmcfactusText

I’m really proud of this! The quote is from she-ra for those who don’t know. I thought it was fitting for him.

THANK YOU ALL SO MUCH! i never knew we would have made it this far! and i owe it all to you amazing beans! here, ill give you a little sketch of cactus on aggie

THANK YOU ALL SO MUCH FOR THIS!

#cactus steven au, #cactus, #cactus steven, #sketch, #aggie, #thank you all so much!, #i hope your all having a wonderful day
37 notes · See All
cactusmcfactusText

So uhhh I did not wake up today intending to make a Steven Universe plant-themed cactus planter but that’s what’s happened. Plants drawn with acrylic Posca pens :)

steven sketches i post that on instgram too on my page 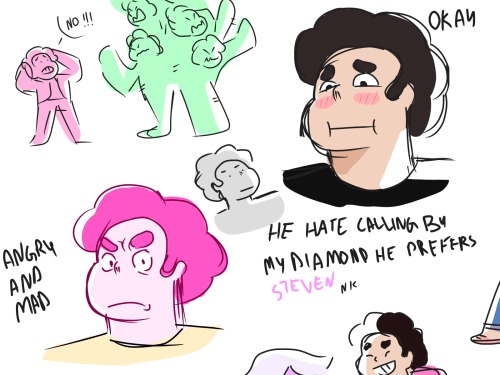 His spines and thorns may make him a little prickly!

A fusion of @cactusstevenausblog Cactus Steven and Shattered!

if it makes you feel better, steven, your cactus also needs therapy!
(based on this meme, i love how accurate it is and i wanted to draw it lol) 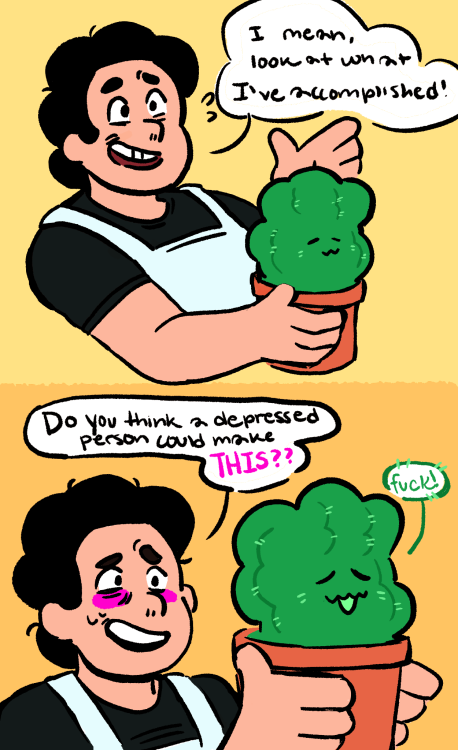 This episode it’s difficult to analyse, it’s very metaphorical and really explores Steven’s current mental state. There so much to talk about that i think i might not be able to write it all in one post.

Prickly pair opens with Steven showing his guardians his new hobby: gardening. They are supportive of his choice of giving up running the Little homeschool.

That’s until they pay attention to what Steven is really doing with the plants.

“You’re stuck in da ground, aren’t cha? Not gonna zip into space and leave evwy'one behind, isn’t that right?”

Naming your flowers with the names of your friends, it’s fine, it’s totally fine.

Steven has created a space in which things can’t change and his “friends” stay the same. I said in another analysis that Steven is afraid of the future. Not change itself but how change it’s going to have an impact on him and his friends. He feels he’s losing everyone. So he needs to recreate this place in which people need him and he can be useful again.

Steven accidentatly brings a cactus to life. This little guy can repeat everything that Steven tells to him. So our teen hero shows his new friend to the Crystal Gems and then takes him out for a walk.

He confesses to Cactus Steven that he has been feeling lost and confused since he he left Little Homeschool.

“Everyone’s moving on, and I should be too, I gave up running a school but now I don’t know what comes next.”

“I used to be helpful, but the Gems don’t need me anymore. Agh! Why do I need to be needed?”

He has always been helping his friends and his family. His identity was defined by him helping others. In the present there nothing to “fix”. This puts him in very stressful situation in which he doesn’t know what to do next with his life

He tries keeping all this problems hidden from Pearl,Garnet and Amethyst. He thinks they won’t be able to understand what he’s going through. Well, more like he assumes how they are going to react if he tells them.

“I can’t tell Pearl how I feel, cause she’ll blame herself, and spiral outta control, and I’ll have to pick up the pieces. And- I don’t want any more ‘high and mighty’ advice from Garnet. I just want to know better for once. And I’m so sick of Amethyst acting like she’s soo mature now.”

He doesn’t want to dissapoint them and get mad at him.

As Cactus steven spends more time with Steven he becomes as toxic as him. Steven has been trying to use him to vent out his problems and mistreating him when the little guy repeats what he heard from the teen to the Crystal Gems.

Cactus Steven goes on a rampage destroying the house in the process. He attacks Steven and doesn’t seem like he’s going to stop.

Steven’s guardians hear all the commotion and fight him.

Remembering Cactus Steven is copying everything he says, Steven decides to take another approach: He apologizes.

“I’m sorry I mistreated you. I know you didn’t mean to hurt anyone- you’re just learning from the only role model you’ve got: me! I should’ve given you more of the love and kindness that you deserve.”

The two share a hug. Finally Cactus Steven understands that he needs to leave. If he keeps living with his “parent figure” things are going to stay the same. Steven must solve his issues first and dumping all his problems on his “son” hasn’t been exatly helpful.

There’s so much one can take from this episode. The main theme, i think, is that we can’t run from ourselves forever. Sooner or later it’s going to become obvious to pretty much everyone around you that you are not okay. Steven tried hiding his “ugly” side from Garnet,Pearl and Amethyst. He mistreated Cactus Steven because he didn’t find anyone else to talk to.

The other lesson is how is a “healthy” person is influenced by living with toxic individuals. How you can become toxic too if you start copying someone you look up to. Cactus only role model was Steven, so he thought what Steven did was right.

The song is this is home by cavetown: mod cappy

Now now now, who are these beauties here?

This is the second time this season that the front of Steven’s house has gotten torn-up…. by a monstrous Steven

(And of course, I don’t think I’ll be winning any prizes for also pointing out Cactus Steven is a representation of Steven’s pent-up issues that turned into a monster, pacified when his parental figure acknowledged that they did him dirty and gave him a big hug, and then he decided to leave home) 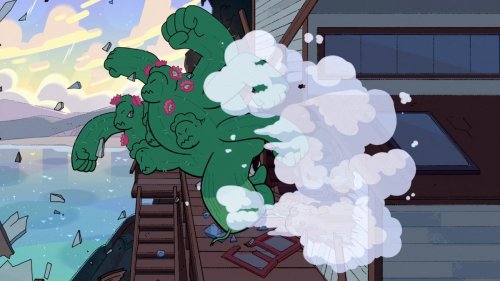 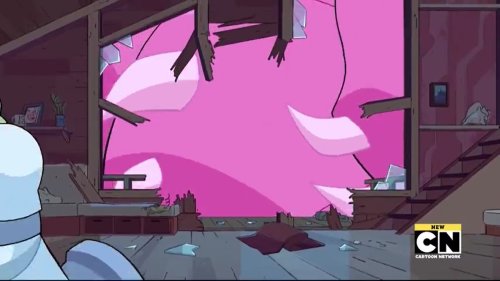 If you count the Lapises as one ‘threat’, literally half of this group shot is Steven in some way 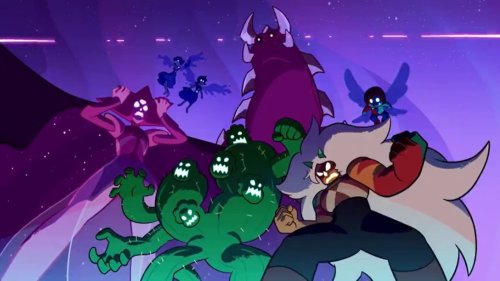 In addition to that, Steven always helped others change. Every single character in the show was changed for the better by Steven, no matter how broken they were on the inside or outside. When they all hugged him while he was corrupted they gave him the will to change for the better, because that’s what he had given them before.

That’s what family means. Loving through the changes.

Um so is anyone going to ask what happened to all those big plant Stevens that were running loose around little homeworld? Did they go somewhere else?

Or even cactus Steven? We have no idea where he could be now.

I’m just keep thinking of them just living in the desert or on watermelon island or something.

Do you guys remember that one scene in Prickly Pair where cactus steven throws Steven’s own shield back at him. Like, it was such a solid hit that it actually made me wince a bit and made me think “Wow I can’t believe that didn’t break his nose!” Well…