To start with it’s always Lust and Obsession,

That one day it will turn into to

I could never resist the way you even touch me.

Being suicidal is silent. Tell someone that they matter and that they are loved. It just might save them.

King Ben-hadad of Syria had laid siege to Samaria, Israel’s capital. The siege was protracted, with Samaria surrounded supplies were cut off. Conditions became indescribably horrible. There was a severe famine.. Four lepers were loitering in front of the city gates, forced to live as outcasts. They said, “Why should we stay here until we die? Let’s go to the enemy camp. If they spare us, we’ll live. If they kill us, we’ll die.” They entered the camp. To their amazement the enemies had fled leaving everything as it was. The lepers ate and drank and carried away silver, gold and clothes. But then they said, “What we’re doing isn’t right. This is a day of good news. And we’re keeping it to ourselves. Let’s go at once and report this to the royal palace.” The news soon spread through the city of Samaria, and in a few hours all the city was at the gate. When the food was brought in from the camp, there was abundance for all the people. During these difficult times, like the lepers, share good news of the gospel with those around you and share what you have with those who have nothing. 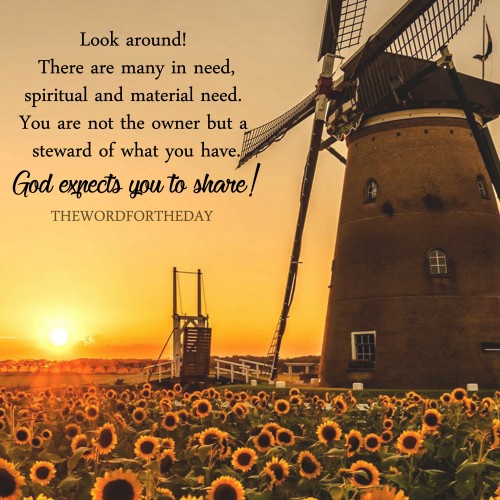 Hey I think I need to tell you something that’s really important.

#love quotes, #self love, #love, #did you know, #you, #beautiful, #important, #caring, #perfect, #iloveyou, #self care
1 notes · See All
theanxiousgalaxyChat
Kindness doesn't equal weak
New Person: Why did you cut me off?
Hufflepuff: I might be nice but that doesn't mean I am a fucking idiot you manipulative toxic bitch
#hufflepuff, #hufflepunk, #kindness, #caring, #strength, #its okay, #toxic, #not okay
5 notes · See All
greenjudyText

“A sense of mind runs like a thread through all our experience: we detect its trace in our perceptions, where it is hard to disentangle judgments from observations. Mind is in experience, holding it all together, creating the connections that permit the associations that build the relationships that form the structures that we, by long force of habit, give the name ‘shape and form.’”

the memories of those good feelings,

These tears are acid on my skin,

As laughters turn to pain.

Always believed in myself,

In my strength and sensibility,

something inside of me hurts.

There’s a void there

Where a heart was,

All I remember now are

All the goodbyes I said time and again

This sweet 93-year-old Scottish granny has gone viral for her very simple, but much needed message to the world. 🥰❤️🙏 Pass it on! #FeelGood
Courtesy: islaane1/Twitter « Hello everybody I’m still here I tell you like a bad penny. There’s no getting rid of me. I hope you’re all keeping well and doing what you’re told. Keep to the rules and you’s all will be fine, It’ll all pass. Bye bye for now. Love you all. Think about you’s a lot» ❤️ .
.
.
.
#protecttheelderly #covid19 #coronavirus #march2020 #stayhome #stayhomestaysafe #stayhomesavelives #lockdown #selfdistancing #selfcare #caring #clapforourcarers #solidarity #spiritual #humanity #awakening #spiritualawakening #love #giving #positivethinking
https://www.instagram.com/p/B-mGPwHjTOl/?igshid=xjn68l7j1lw9

There has been quite a sudden demographic change in the group of Facebook users, of late. Have you wondered why your Boomer or GenX parents are suddenly taking to Facebook and why they can’t stop talking about it? Well, here’s one way to look at this:

The primary reason for the middle-agers to have started using social media like Facebook is quite simply, peer pressure. Only, it’s no pressure. Our aunts and uncles have become unpaid promoters of Facebook by way of encouraging and convincing their peers to join the platform to ‘get with the times’.

With changing times, heavy national migrations and limited resources, if there’s anybody who has lost touch, it is the middle-agers. A huge part of lost connections has been a result of arranged marriages, work-relation relocation and sometimes just a change of heart. We have all heard them recite the stories of their youth when times were simpler and joy was not out of reach, stories about their friends, their professors and the little ones in their tightly-knit colonies. The emotion with which we have heard them tell us about all these anecdotes has eventually led most of us to try and get in touch with their long lost friends for them. It’s safe to say that the joy- the pure happiness they have found by way of reconnecting with an old-times has been moving. It tells us why their relationships were built of something else altogether in contrast with the delicate relationships we have now.

These middle-agers are from times when sending letters were the norm and STD calls would burn a hole in their pockets. The dynamic shift in how communication is perceived has been massive. From waiting for days, sometimes months, to receive a reply from loved ones, to get a way to be in touch with them IN REAL TIME has been a weird blessing that nobody wants to miss out on.

Since we kids have grown up with the onset of technology as we know it, they have always struggled with the idea of how easy we made it look. How is it that a 2-year-old knows how to record a video on a phone while his 50-year-old grandfather struggles to understand the same? It’s honestly quite obvious: Technology was a new concept. Between bringing up a bunch of kids, ensuring their quality of life AND keeping up with the market scenario, there was little time to indulge. When IT took over, people thought of it as a passing trend, a FAD if you will. But then, it stuck. Who could’ve thought? Computers? What good are they for? It wasn’t an easy concept to grasp and neither did they have time to spare.

Now these middle-agers see their kids and grand-kids who have grown up with technology, use it like bread and butter. It’s baffling. The social impact the times have had on the youth has left the older generation feeling somewhat out of the loop and the need to feel involved is REAL. Facebook has acted like an opening on that journey. They see their fathers and mothers using a new-age social media platform and they appreciate the effort that has been put in by them. An effort to learn, to crush their orthodox inklings and accept the present. It’s empowering.

Photos, videos, articles, statuses- WHAAAAT? Wait a minute, that’s information overload. Or is it? For those retired or in the last leg of their jobs, it’s the perfect thing to fill their time with. These are people who are done with most of their household duties, just waiting for time to go. With Facebook, they now have access to real-time updates of their friends and families. YAY TO GOSSIP.

Facebook has a pretty straight forward interface with a variety of tools to explore. They now get to be a part of a bigger community with a click on a screen? How is that not a good idea? You now get a send baby videos to your grand-kids and tell them how they were the same. Commenting on their niece’s Europe trip pictures makes them feel complete. And if she replies to the comment? BINGO, she has now extended micro-emotions of feeling included and valued. Why didn’t they think of this earlier, they question themselves.

It’s the simplest thing in the world to judge someone, but a little empathy goes a long way. It’s understandable to get irritated with the elders nagging you to teach them a few nicks but think about how you can alter a person’s mood just by sparing a few minutes to teach them how to send an emoticon. We are the by-products of our older generation and we owe it to them to empower them and help them understand things we are fortunate enough to call our bread and butter :)

I feel everything with you 🖤

Dick: “Nothing is hopeless. The Batman has proven that a thousand times over.”

Lilith: “That’s no longer the point here. And the trouble is–you’re missing what’s important to me now. You chased away the winged man for no reason. I pleaded with you to stop, but you didn’t listen. I can’t let the stress keep building… I can’t let the nightmares take me over… And I can’t stay where my wishes are ignored. I’m leaving again. And if you care at all, don’t try to find me. I can always find you.”

Donna: “Nothing… because she’s right.”

Kory: “Well, we saw how they looked at each other… we obviously ignored their feelings.”

Donna: “Sometimes, in the name of expedience, we move too quickly, too roughly, too harshly. We’re so used to fighting some foe, we immediately assume everyone’s an enemy.”

Dick: “We can’t read someone’s heart and we can be guided by that even if we could. We saw Lilith twice burst into flame when the winged man was near her… we did what we believed was right. And even if it wasn’t, we can’t brood over a mistake.”

Kory: “Not even if it lost us Lilith?”

Dick: “Look, I’m not being cold–I care for her and I don’t want her to leave… no more than we asked Raven to vanish– but we don’t own each other… if Lilith, or Raven, or anyone else needs time for themselves… for whatever reason–that’s their business, not ours.” 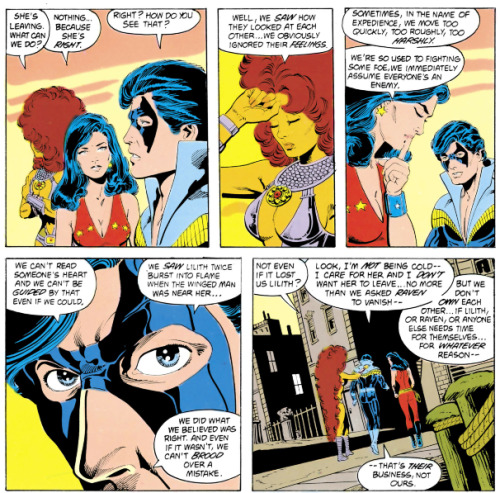 “I’m sick and tired of being a Hanson fans. They treat us like they care about us only when they need to get their money. I know what you are going to say, but it’s not like I can stop caring about them and the music that shaped my life.” 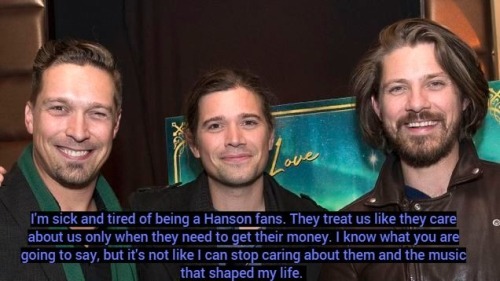