Carrie with an s/o who has anxiety…

T-875 was sent to protect Carrie White from T-OMNI 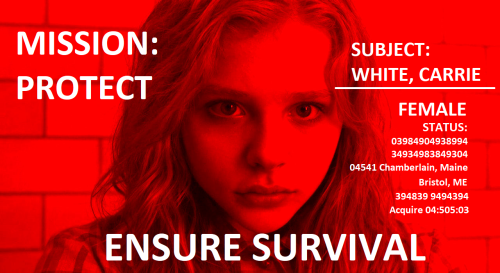 T-OMNI was sent to kill Carrie White from T-875 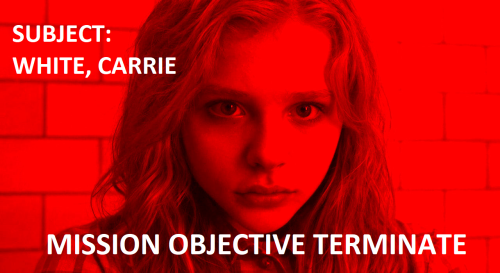 honestly the fact that they haven’t written, recorded and released an entire Dirty Candy album so that they can infact take over my playlist is honestly just pure homophobia.

“And therefore, since I cannot prove a lover
To entertain these fair well-spoken days,
I am determined to prove a villain
And hate the idle pleasures of these days.”~Richard III, Scene I, Act I

Or as Tyrion said, the rest of the world won’t forget what they already decided you are, so wear it like armor and use it against them. In their case, these people did just that when they realized that the die had been cast against them. 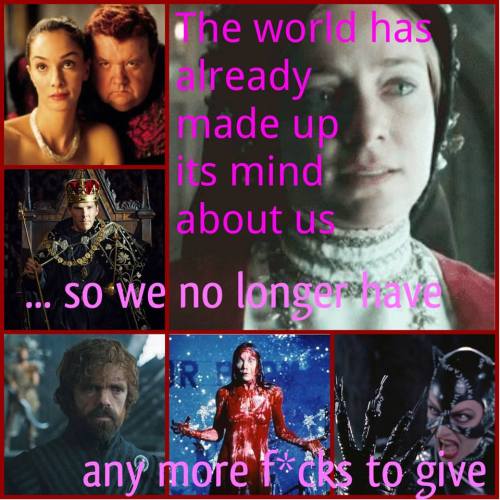 Portrait request by talented body painter tawnyannax over on instagram.

This is based on her interpretation of Carrie 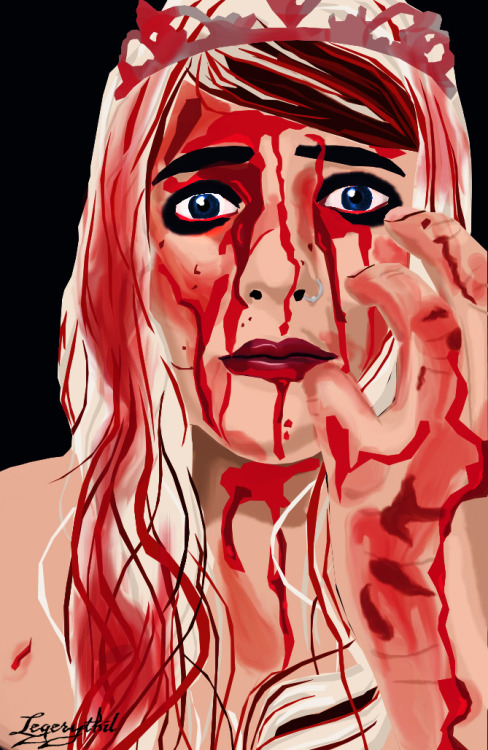 Want to help support the comic?

Want to read the comic somewhere else too? 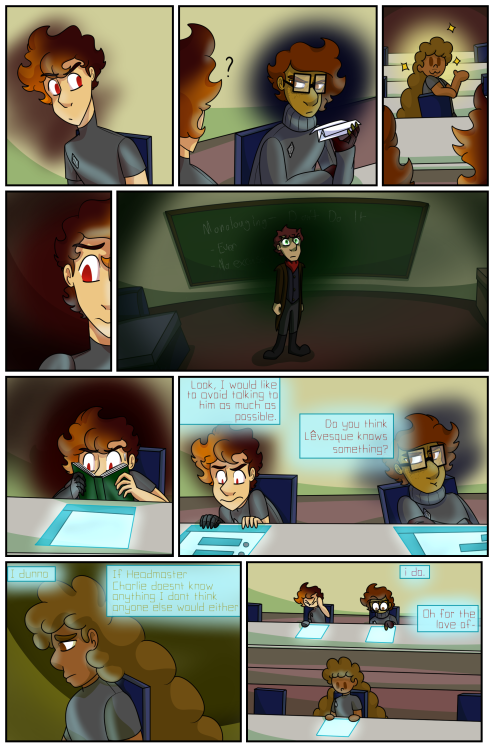 Let’s start with something straight forward: telekinetic versus telekinetic. At first blush this may seem to unfairly favor Jean Grey, but in the novel Carrie is much more powerful than she is in the movie (budget constraints cut her power level pretty considerably). Also in the book, Carrie’s telepathic as well so this match-up is more even than one may initially think.

So, who would win?

Carrie is a 1976 American supernatural horror film directed by Brian De Palma from a screenplay written by Lawrence D. Cohen, adapted from Stephen King‘s 1974 epistolary novel of the same name. The film stars Sissy Spacek as Carrie White, a shy 16-year-old who is consistently mocked and bullied at school. Her peers are unaware that she possesses telekinetic powers.

Jean Elaine Grey is a fictional superheroine appearing in American comic books published by Marvel Comics. The character has been known under the aliases Marvel Girl, Phoenix, and Dark Phoenix. Created by writer Stan Lee and artist/co-writer Jack Kirby, the character first appeared in The X-Men #1 (September 1963).

Jean is a member of a subspecies of humans known as mutants, who are born with superhuman abilities. She was born with telepathic and telekinetic powers.

artistsandbeyond: hello. been a while, sry we were busy GETTING DEREK KLENA 😭🥺. JAN 27th twerkshop, 12 participation slots only. $15 to observe aka stare at his beauty YEAH I SAID IT. 😩👽

i might export to ao3 later but for now these are just going to be on tumblr. part two yo! this is mainly just her and carrie talking + interaction with carrie’s dad @penguin-writes-books (because she seemed to really like the last one and i appreciate her)

“My dad isn’t home yet. I thought he would be, but there must be something going on at the studio. I can get you something to eat in the meantime.”

“So uh, how can the boys be missing if they’re holograms or whatever you said. I never quite understood what you meant by that but technology goes over my head sometimes.”

“I’m not acting. I seriously don’t understand how your tech works.”

“Neither do I,” Julie muttered under her breath before coughing to attempt to cover it up.”So. Ok what happened was. None of the boys showed up for rehearsal today. And Luke was supposed to show me a new song and…”

“What’s the deal with you two? Is it possible to date a hologram?”

“He’s-He’s still a person. And uh, we haven’t really defined-”

Carrie started laughing. “You always were clueless with boys. I mean I suck with them, but you-you’re a different breed.”

She walks towards the beige countertop and takes a seat on a stool.

“Are you sad that you and Nick broke up? I ran into him at school today, and yeah something was definitely off.”

“I mean we weren’t that close. And I think I was just using him as a placeholder. Like my dad isn’t around all the time. He tries his best, he does-wait, why am I telling you this? You’re probably just going to tell Flynn and then I’ll be Carrie the bitch with daddy issues and a bad romantic track record.”

“You’d put it nicer because you’re Julie, but that’d be the gist. And then Flynn would probably make a comment that sounds just how I put it.”

“You don’t have to talk about it if you don’t want to. I was just trying to make conversation and I didn’t think you’d be so-”

“Yeah. That’s oddly a good term for it.”

Carrie hands Julie a glass of water, managing to remember that Julie had asked for it, and watches as Julie takes a sip.

Julie sets her glass on the corner. “I’m actually in a pretty good place right now. But yeah, when my mom died, that whole year I was sad about her but other stuff happened too.”

The door swings open as Mr. Trevor “Bobby” Wilson walks through the door. He glances over at Carrie shrugging. His jaw falls as he notices Julie casually sipping a glass of water and a smile on Carrie’s face. Huh. It’s been a while since he’s seen those two things together.

“Hey, Carrie. Julie. I was going to head upstairs. It’s been a really long-” he yawns, “day. But if you girls need anything please let me know.”

He walks towards the stairs as Julie jumps out of her seat and stumbles towards Bobby. “There was something actually. What do you know about a band named Sunset Curve?”

“Sunset Curve… I haven’t, uh, heard of that band in ages. What- what brought this up?”

Carrie and Julie exchange a look. Carrie nods before Julie goes forward with questioning leaving Bobby anxiously twitching with the fabric of his pants and his fingers.

“I found a CD in my mom’s stuff that said Sunset Curve, and I hadn’t really heard of them before. I did a google search and all that. And then it occurred to me that who knows niche music better than Mr. Wilson, so I talked to Carrie and we decided that today would be the best day to ask you.”

Carrie smiled and nodded, her brain still trying to calculate how far Julie would take this.

“I-I would have to check my records you know. I know a lot of bands. Carrie really should’ve vouched for that. And my memory kinda sucks. Again Carrie can vouch for that.”

Carrie flinched at the last comment but Julie’s attention was so focused on Mr. Wilson that she failed to notice. Julie furrowed her eyebrows and stepped closer.

“Yeah, but this would’ve been back when you were a teenager. I’m sure you would remember. A band of four guys. I can only remember three of their names though. Alex Mercer, Reggie Peters,” Julie paused, “Luke Patterson.”

“Yeah, okay. Sunset Curve. The boys died in some weird hot dog accident. Your mom was a fan of theirs I think.”

“Did you know them?”

“I wasn’t close with them. But I was a part of the band. Don’t think they liked me much tho. They definitely wouldn’t like me now.”

“Is there anything else about them you can recall?”

“They used to practice in your mom’s old studio. I-I really don’t know what you’re looking for. They’re dead. Been dead for decades. If you like their music, cool. But there’s nothing more I can do for you. Carrie, can I see you for a second?”

“Yeah, sure, Carrie,” Julie says, turning her attention back to her finished glass of water on the counter. That was weird. “Should I go actually?”

“Julie, it shouldn’t be long.”

“Yeah, and you guys were having such a good time right?” Bobby asks as Carrie aggressively nods towards Julie.

To flynn: found out nothing :( except for the fact that mr wilson is super weird about sunset curve and i think he’s mad at carrie for letting me bring it up.

from flynn: yeah, that sucks. but if all he knows is that sunset curve is dead, was he really going to tell you anything in the first place?

To flynn: idk i thought maybe. He gets really weird about them. He did tell me that he was in the band so i think that might be new information. Or maybe I just never put two and two together before.

From flynn: are you still there? At carrie’s?

To flynn: No. once mr wilson got super weird, he wanted to speak to carrie in private. And i thought it would be best to go. I have enough family drama, i don’t think it’s in anyone’s best interest if i get involved in theirs.

From flynn: definitely. besides it’s not like carrie is our friend.

To flynn: i don’t know what i was thinking. meet up tomorrow?

To flynn: glad to hear it, underachiever.

Julie took one last glance back at the Wilson House before heading home.

She refrained from voicing out loud the thoughts in her head no matter how much she wanted to. Life made more sense when she was able to voice her thoughts aloud, and the number of people she could do that with was cut in half with the boys missing. Maybe when she got home they would be there. Maybe she had freaked out over nothing.

However, when she opened the doors to her mom’s studio, she was met with nothing but an empty house and unused band equipment.

She was not wrong.

The boys were still gone.

All eyes on me, please, thank you.