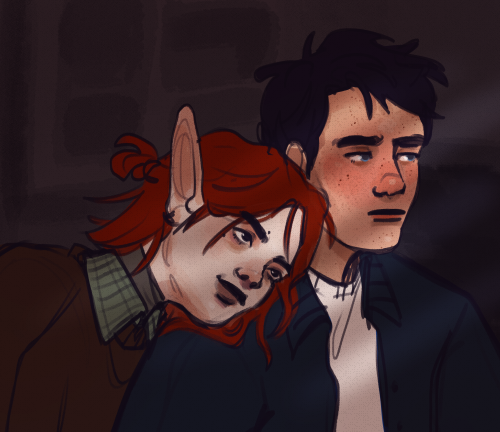 Consider…….. Alistair and Carver and a family of little pups 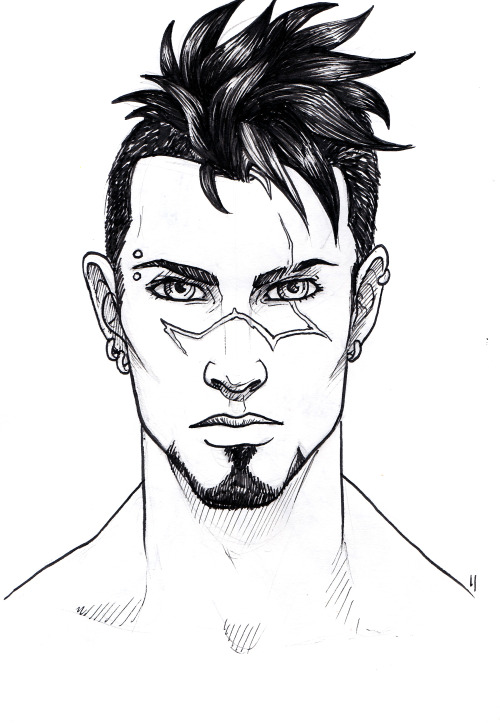 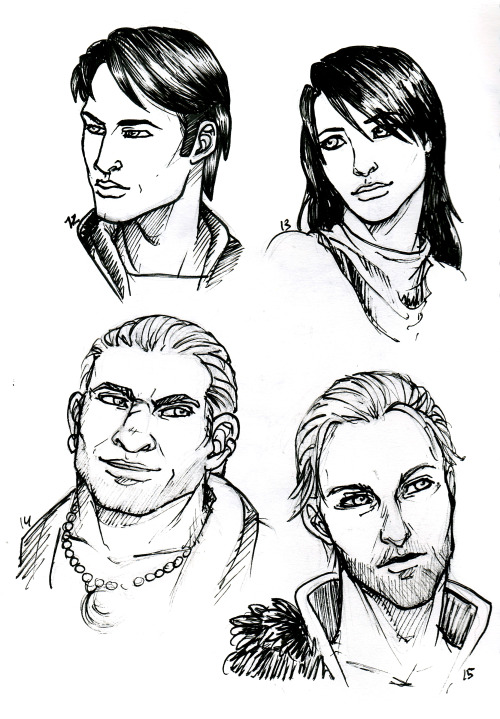 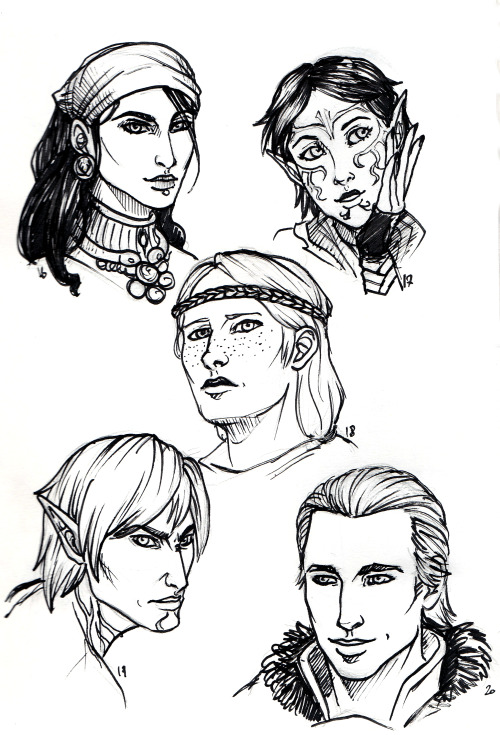 a carver i never uploaded 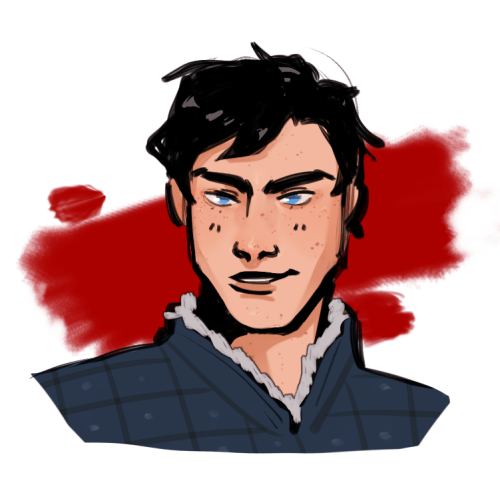 Fenris/Marian Hawke - After the Glitter Fades

I don’t think I ever posted the version without the text on here, despite it being my favorite.

He’s still stressed af because he’s just watched hundreds of his countrymen get slaughtered, his home destroyed and his twin sister killed in front of him, but the trauma of it hasn’t really set in yet

Whereas in act 1 the trauma has set in and he hasn’t had the chance to work through his grief either which makes him keep to himself and be really irritable and his emotions are unpredictable (we literally see this in the first few minutes of act 1 when he blows up at Hawke about the Templars and then immediately backpedals bc he didn’t mean to take out his stress on them, though there’s also missing context of why he’s so stressed that was cut from the game but I’m p sure I’ve already rambled about that before lmao)

Post-act 1 Carver (more so as a warden) is much more like how he was in the prologue, but more mature and confident in himself (and not dealing with. yanno. the immediate threat of the blight lol)

As someone whose emotional response to trauma (and overstimulation too, which isn’t entirely related but alas lmao) is irritability and a tendency to accidentally lash out to the point where it even catches me off guard, I related to Carver a lot there tbh

Summary: Alistair Theirin and Carver Hawke reluctantly attend a formal event as Warden representatives. They discover that it’s actually much nicer outside under the stars. Written for the prompt “staring at the other’s lips, trying not to kiss them before giving in” from @natalyelle but tumblr ate the original ask 💔

One advantage of being a Grey Warden, Alistair often thought, was the general lack of expected involvement in fancy politicised events.

Of course, that wasn’t always the case, and Alistair found himself now standing awkwardly to the side of one such event, wearing an uncomfortably stiff formal uniform and doing his very best to avoid the attention of the well dressed ladies trying to catch his eye. It had been easier when he hadn’t been alone, when he’d been able to look busy in conversation, unable to give them any time.

Not that he was pretending to be interested in talking to Carver, of course. He was always interested in what his fellow Warden had to say and it had definitely been a relief when the Warden Commander had told him who’d be accompanying him when he’d insisted the Wardens made an appearance.

But now his fellow Warden had wandered off to do… something, and Alistair was left trying to pretend he actually knew what he was doing.

“Got you something,” Carver said, reappearing beside him as if he knew he was the subject of Alistair’s thoughts, a plate of finger food clutched in his hands. It wasn’t entirely clear what the food was, other than something fancy and no doubt expensive. “Dunno what they are but they taste good.”

“Were you meant to take the whole plate?” Alistair asked, amused. Carver glanced down at it and shrugged as Alistair helped himself. Even on closer inspection it wasn’t clear exactly what he was eating but Carver was right - it was good.

“They didn’t stop me when I grabbed it,” he said, popping one delicately in his mouth. “I thought maybe we could get out of here. Find somewhere outside.”

“It’s a tough decision,” Alistair said, already moving towards the external door. “But you have made a very compelling argument. Even better if you’re throwing in that plate of food. Let’s go.”

For the first time, she looked up at his face. His eyes were clear and blue as the Waking Sea, and as they locked onto hers, something warm kindled inside her chest.

Relief flooded his expression, dancing in those eyes, and he held onto her just a little too tight.

“Oh, thank the Maker,” he breathed.

Carver Hawke, once the captain of the Kirkwall Guard, has left his old life behind to return to Ferelden and become Commander of the Inquisition. But when another Hawke chooses to make the ultimate sacrifice, he’s reunited with some old friends to get her back—including a certain elf he thought he might never see again, whose arcane expertise might just save his sister.

This is a DA2 fic masquerading as a DA:I fic and we have no shame. Hope you’re ready to feel the yearn. Wave to the canon as it passes us by, folks!

do you like pining? the Hawke siblings being the Hawke siblings? Merrill being the most capable person in Thedas? serious canon divergence? more pining? well boy do @veorlian​ and I have the fic for you! two ex-English students got excited over Tennyson and this happened, basically.

It sucks when writers hate their own fucking characters this much 😔

Fuck it I’m posting it here too lol 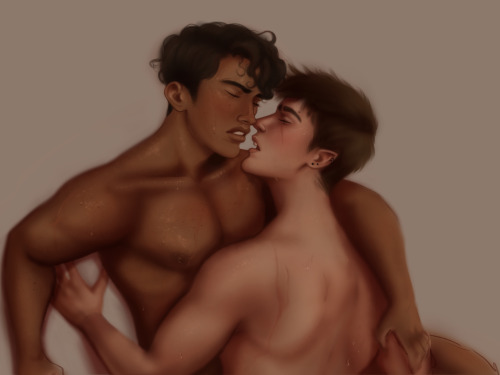 i firmly believe that carver and bethany hawke would have choreographed dance routines they bring out at parties and yes, carver does them in heels. that’s part of the routine.

#carver hawke#bethany hawke#bethany and carver#this is so messy lmao but im too lazy to change anything now#i already wasted like 2 hours of my life on this#but on the plus side i have an idea of how to do this now so >:)
41 notes
girlbambitious
Photo

Carver, visiting home. Upset he was given the smallest room, but happy to be with family. Even if that family includes stupid Hawke. 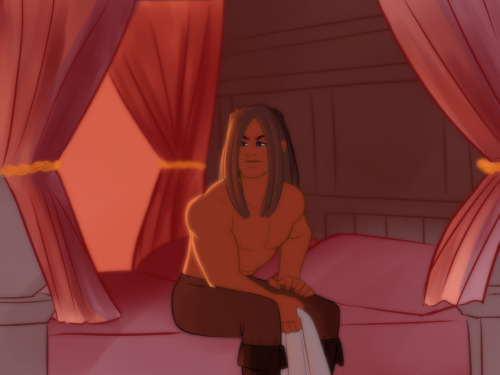 Someone is live-tweeting their PT of Here Lies The Abyss, which is reawakening all my rage about how stupid this quest is. Have a headcanon thread 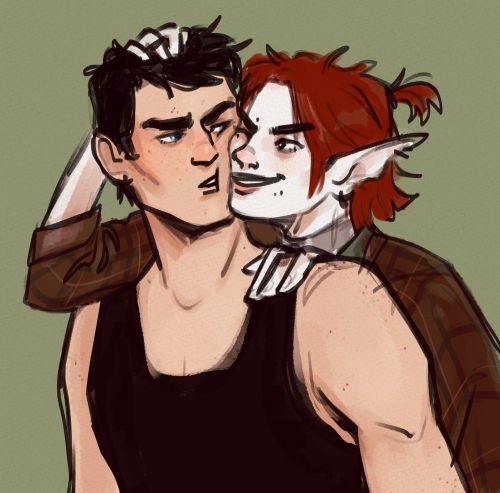