Birds of Prey: And the Fantabulous Emancipation of One Harley Quinn (2020) dir. Cathy Yan

Do you know what a harlequin is? […] A harlequin’s role is to serve. An audience, a master. You know, a harlequin’s nothing without a master. And no one gives two fucks who we are beyond that. Yeah, I don’t know who you think I am, lady, but I’m not her.

Birds of Prey: And the Fantabulous Emancipation of One Harley Quinn (2020) dir. Cathy Yan

They call themselves the Birds of Prey. I call them dorky little do-gooders.

THE BIRDS OF PREY (AND THE FANTABULOUS EMANCIPATION OF THE ONE HARLEY QUINN) | 2020 dir. Cathy Yan

You drive as good as you fight?
BONUS:

Title: hoping to find (what i can’t figure out yet); chapter 1
Author: Sydney Redfield
Fandom: Birds of Prey
Pairing: Dinah Lance/Helena Bertinelli
Disclaimer: This isn’t real. I own nothing.
Summary: “I realized after I got to my class, I never got your name.”
“Oh, um- Helena.” She stands, hand outstretched awkwardly for a handshake. “Helena Rosa.”
“Dinah Lance,” she says, laughing as she shakes Helena’s hand. Her hands are cold from the bottles of beer, but Helena’s hands are warm - so warm - and Dinah doesn’t want to let go.
OR; The college AU where they become friends and fall a little bit (a lot) in love.
A/N: Thanks to @konako and the anon who put this in my head and now it’s become a monster that won’t leave me alone. Also thanks to stoveek for making sure I understand the English language and how to use commas.

#dinah lance, #helena bertinelli, #dinah x helena, #helena x dinah, #birds of prey and the fantabulous emancipation of one harley quinn, #birds of prey, #my fic, #otp: i got you
19 notes · See All
we-stan-six-the-musicalText

(after birds of prey)

Poison Ivy: Harley what the fuck did I miss?

Poison Ivy: Harley what the FUCK did I miss?

Sometimes a family can be a cop, a pickpocket, a psycho, a songbird and a Mafia princess, and I think that’s beautiful.

#birds of prey, #dc, #Margot Robbie, #harley quinn, #dinah lance, #Cassandra Cain, #renee montoya, #the huntress, #i just watched this yesterday and i miss them already, #idk if i should use the word 'psycho', #but harley Quinn herself used it so, #idk, #mt
70 notes · See All
dailydccomicsPhoto 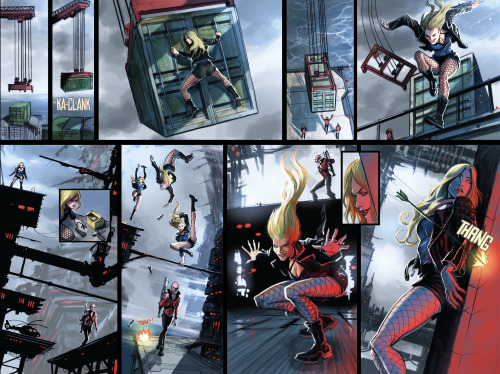 Harley: Is very chaotic. She can swing between being super bored and being super engaged in something. Cuts up all her clothes to make new ones. Does really weird craft projects.

Dinah: Is worrying about money. “Club singer” isn’t a particularly high-paying job, and she doesn’t like taking money from Helena’s fortune, but she’s very responsible with her money. She takes the time to practice her hobbies and learn to cook better.

Helena: Is very disciplined. She has a schedule and she sticks to it. She misses going to work out, but she goes on lots of runs and has a grueling inside calisthenics routine. She takes an opportunity to try out sleeping in and being lazy (lots of things she missed out on when she was training to get her revenge)

Cass: Goes very stir crazy, but she’s living with Harley, who’s both entreating and pretty good at coming up with stories and projects and weird shit to do that can be done inside. Gets very excited for trips to the grocery store.

Renee: Pulls all-nighters obsessively researching whatever person/event she thinks might be suspicious. Makes like four bulletin boards of pictures connected with red string, because she thinks they suit her vibe. She winds up keeping them as decor.