although im sad that csm is ending in 2 chapters, im also not surprised considering the wild ride we’ve been on

#aki </3, #the way i couldnt get myself to read chp 77-79, #it pained me to see what went down, #csm spoilers, #chainsaw man spoilers
0 notes · See All
nezuchuukoText

Makima to Denji in ch 95

at least he tried

#chainsaw man, #chainsaw man spoilers, #it has been a ride, #i dont mean in quality i think i mean it hasnt gotten oldto me yet lmao
51 notes · See All
skiplo-waveText

We gotta kill her source to her access of simps

*looks at Kobeni and Kishbe*

makimommy showing off her moves

Chainsaw Man vs. The Control Devil 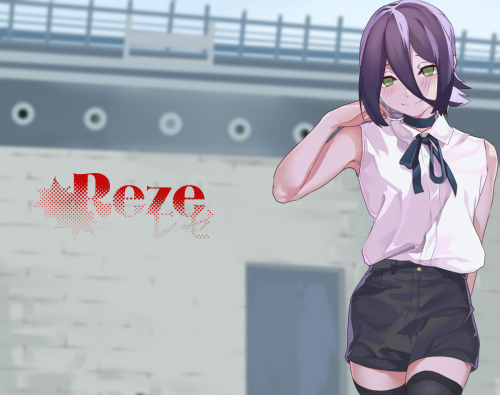 csm is back with some action and flying organs

LOVE OF GOD GIVE CHAINSAW MAN AN ANIME

Lol figured she summon zombies at the graveyard

i think what the latest chainsaw man chapters have been about wrt to chainsaw man becoming a public figure is the struggle of denji’s personal image as opposed to his popular one. chainsaw man is revered and worshiped as a hero who saves the innocent from devils. the masses love him. girls want to date him. but despite all this adulation, a nagging question persists within the story: do the people love denji, or do they love chainsaw man?

this conflict of denji learning there are now expectations towards him from the world at large are in a juxtaposition to the conflict he has with makima. makima doesn’t want denji. makima doesn’t love denji. makima thinks denji is a pawn, an object she can twist and mold into chainsaw man, the monster she is actually yearning for, who will carve through any and every obstacle between her and her perfect world, and perhaps even achieve it by becoming so powerful he turns into the only thing that can cut her, the most powerful demon in existence, down and free her from her own compulsively domineering nature and free the world from the concept of control.

makima cannot forgive anything that doesn’t fit into her view of a perfect world. this includes the devils who oppose her such as reze, and also her very subordinates, namely aki, power,and denji himself. when denji asks if makima’s perfect world has bad movies in it and it replies that it doesn’t, that’s denji coming to understand that in makima’s world, no one can be themselves. no one can be themselves in their awkwardness, their pain, their love, their goofiness, their struggles, their sins, their ambitions, their selfishness, their cowardice, their desire to grow and improve, and even in their state of being nothing and no one at all. to denji, that is unforgivable, because the person he has grown into, the person who cares and thinks about others and fights for their right to exist is only present because he grew alongside people he butted heads with and came to cherish and understand, and were people makima cruelly erased from this world to further her goals. despite makima understanding her pawns intimately, she decided that their imperfections were things to throw away rather than real problems she could have helped them overcome with genuine empathy.

this is a theme that is present in fire punch as well. fire punch is also centered around a conflict of agni not knowing who he really is and what he really wants, pressured by the conflicting desires of the people who worship him and his sister’s dying plea: “live.” agni is constantly in doubt on what to live for. live for revenge? live for his followers? live for his loved ones? and the answer he finally obtains after all the carnage and suffering he and the world inflicted upon themselves and one another is simply “live for yourself”. and that’s what chainsaw man has been from the beginning. about denji’s desire to not just live for himself, but as himself free from burden. the world might not want denji, but denji wants the world to at least want itself, and maybe if it learns to accept itself, it can accept him and everyone else it had discarded.

denji got his priorities straight

chainsaw man is rumored to have an anime? 👀 now let us all wait for jump to make an official announcement ❗❗

Denji, desperately trying to befriend the blood devil: Listen, the nation is in turmoil, and what they really need is a president