To the lovely Anon who sent me an ask weeks ago (let’s face it, at this point, it was months ago) about my favorite scene to write in my Portal 2 fic – I finally have your answer.

Yours was literally the first ask I have had in years, and I was so excited and sat down right away to reply – then got interrupted 2/3 of the way through, went to save my reply as a draft to finish later … and then discovered asks are a one-time deal. I didn’t know that they only stay in the ask inbox if they’ve been replied to, and I couldn’t figure out how to get your question back.

Anyway, if you’re still out there, please know I am terribly sorry that I never responded to your question, and please also know that your kind words meant (mean!) SO much. (And also please PM or send another ask to let me know you’ve read this? Because I honestly feel like shit about it.)

My favorite CDaSH scene to write and why:

The cake is a lie

some more whiteboard doodles b4 i go to sleep 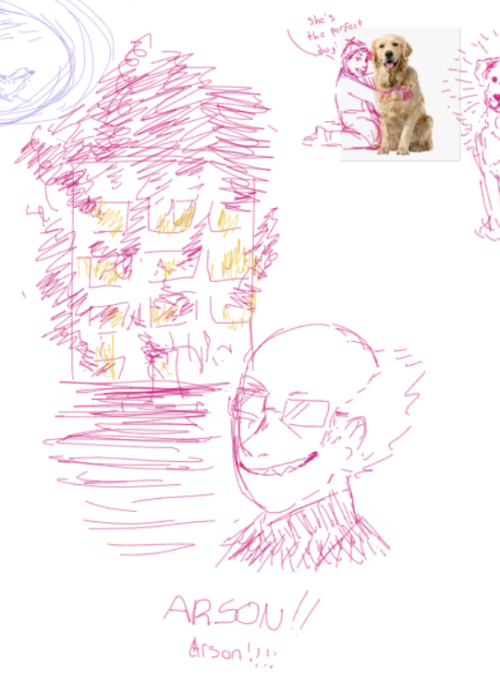 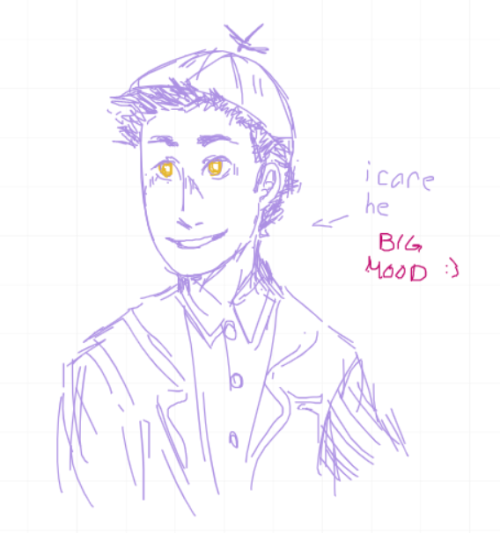 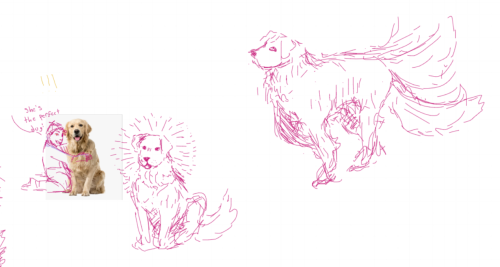 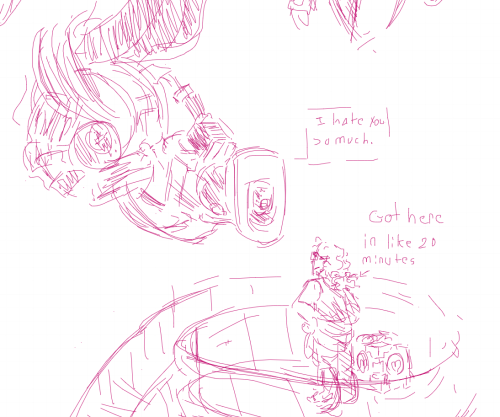 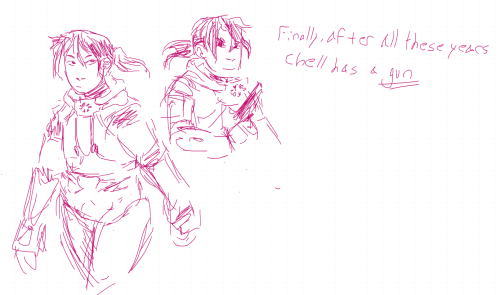 Here have a sketch dump

There’s a few so they’re under the cut. It’s mostly Adrian Shephard, who was introduced in the newest chapter! 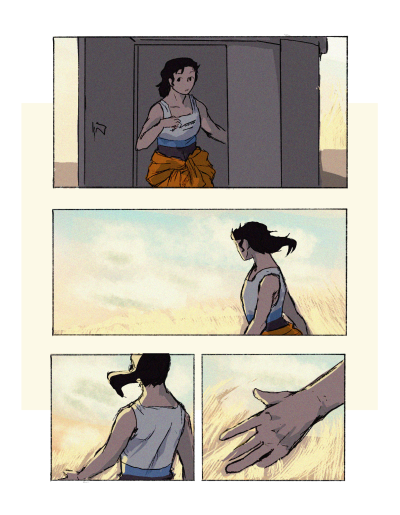 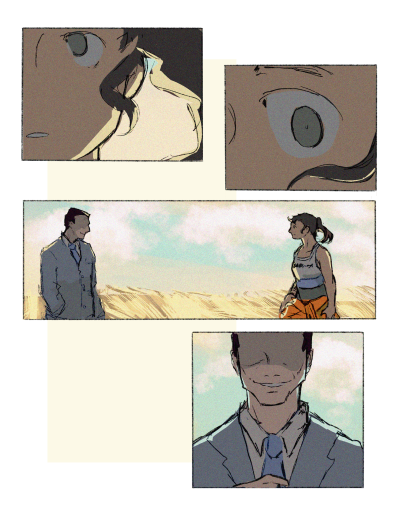 “A potato flew around my room before you came~”

Chell, swinging PotatOS around on a string 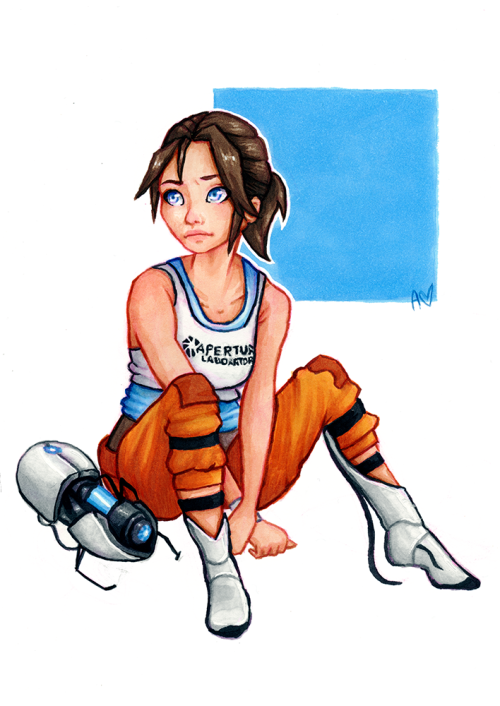 It was an odd and fickle thing, and definitely not within the scope of his dreams.

But he was sat in a living room- the living room of a house, a house inhabited by humans. Free humans. Sunlight streaked from a battered window set above and to the side of a worked wooden table, and in the golden beam danced waves of swirling dust. She reached over, stretched on her tip toes, to push the window open- letting fresh air flood in. She took a breath, a deep breath, until she nearly felt her ribs hurt; and lingered in the sun for just a moment longer. She was weary, it wasn’t hard to pick that up. Exhausted, worn, sapped, drained, spent; no word, in any language- he judged- could quite compose it.

And he observed her every move, photographed and analyzed and saved even the slightest motion; a tremor, a slightly out-of-tune breath, the way her hair coiled on her shoulders when she’d abruptly halt- all were precious, priceless, artifacts to be preserved for eternity. He was unsure whether his mind had cleared miraculously or had been pushed far beyond the line of lucidity, but she stood before him, finally- he could be certain of the image he was seeing and the sounds he was hearing; he could reach out and touch her, his savior, his faith. No longer was she a merely fabled thing, the flash of life on the other side of a wall, that he could not- and would not, at any rate, dare- look upon.

She existed, and was entirely as he’d imagined her. The house was bleak, every surface from the sofa he sat on to the floor pelted in a thick layer of plaster and dust, grey smudged all over- she was the only flicker of color animating the scene. They’d had to flee, for just a bit; and had come back home to near ruin. He had no memory of anything but ruin however, and she was used to having to put her life back together. She’d figured out, after a while, that every time something came along to break her, she still had all the pieces. Maybe minced a little more finely than before, but they were all still there- all she had to do was find some glue and be patient with herself.

He wondered about that, in fact; what had happened between the moment that the box was opened and now. How long had she been living this, this new life in this new town, with these new people and this new regime and this new…

That’s what he wanted to say, what first came to mind. But that wouldn’t have done her justice; this angel, this grace, this virtue- she had always been free. Undoubtedly and ineffably she was a force of nature, unrestrained and unrestrainable- to shackle Chell was as nonsensical and as dangerous as putting a halt on gravity, as attempting to drown out the sun or reverse the Earth’s direction on its orbit.

Eversince his addition to the town she had treated him indifferently- not out of any spite, of course, they both understood that. She wasn’t talkative by nature, and especially not when faced with some thirty imminent disasters knocking on the front door. The threat of war on one side, on the other the memory of That Place, of what he represented, of the thousands of cryptic messages he’d left that had more than once saved her life- she was grateful for them of course, grateful for him, but she had accepted him as dead and his scrawlings as age-old mementos for so long, that she had buried him the same way she did all the memories and impulses she’d gained Back There.

And so they wondered in silence about each other, day after day; she let him meditate over a cup of tea in her living room, and he made himself as small as possible and observed in silence, the way one would if they were suddenly in the same room as their deity. To some extent, that’s exactly what Chell represented- but not in the way that She was. Not in that tyrannical, knows-all, sees-all, has-your-soul-always-on-a-scale way. Chell didn’t survey from above, and didn’t rule with an iron fist, and his mind didn’t feel the need to make her image into a cloud of smoke and thunder. He saw her clearly, always had, and in the hours prior and during her run through the bowels of the Beast he’d found himself- a man of Science, otherwise the farthest from spiritually-inclined- praying to her, believing in her in the way one does only their God.

He’d painted her on every wall; when he felt sad, when he felt hopeless, when he felt the panelled walls tightening around him. Poured his heart out onto the wretched, lifeless-but-alive walls, then brought his forehead to the concrete and praised her. Everything she may have touched, every space she may have occupied eons ago- those were his chapels, his places to serve and muster up the courage to go on.

So when, against all odds, their paths met, he fell to his knees and he cried and he thanked her like one would their god. She hadn’t forgotten that; the shock lingered like a bad taste, like an oily smudge on your clothes. Which was why, every now and again, when she thought he wouldn’t notice, she’d throw him a glance- just for a moment, just to confirm to her that he was in fact there; this man that idolized her, a victim of chance, as his savior. She was unsure of how to cope with that, how to accept this sort of reality; and unsure of how she’d shed the unbreakable connection between him and That Place.

It was an odd and fickle thing, and not within the scope of her dreams.

Just uhhh… a dumb drabble I felt the need to make! Always kind of wondered what Chell and Doug would think of each other and how they’d react upon meeting. But I couldn’t stay focused on it long enough, so… rushed and bad :/

#t's posts, #writing, #now let's see... you can tag as chellmann if you want, #even though it's sort of vague and i didn't write it with anything romantic in mind, #but like you know what? have fun with it, #portal, #portal 2, #chell, #doug rattmann, #glados, #apocalypse au, #!!NOT CONFIRMED CANON!!, #so if you're still up for the plot of the apocalypse au, #this takes place in its setting but isn't part of it, #...maybe, #we've yet to discuss it
13 notes · See All
gladosofficialAnswer

this is bill fletcher. everyone say “hi bill!”

bill fletcher was the lead animator for portal 2, and? what’s that? the face reference for cave johnson? indeed. bill is white.

this is laura dubuk. everyone say “hiiii laura!”

laura dubuk is a visual designer at valve and, surprise surprise, the face reference for caroline. laura is white.

this is alésia glidewell. all of you say “hey alésia!”

alésia glidewell is a japanese brazilian actress (among other things). she’s the model reference for chell. alésia is not white.

i feel like we do this every week so hopefully these pictures might help it get through to all of you who firmly believe this shit theory. it’s racist and completely erases chells identity. it’s sexist and completely ignores caroline’s identity. and i don’t know how many times i need to say this but basing this HC off of cara mia isn’t great either because “bambina” doesn’t translate to “baby girl” in the sense y’all seem to think it does.

#jesus fucking fuck, #like as much as i want to ignore this because at this point youre def just baiting me, #i cant, #because i know some people actually still believe this shit, #im so tired, #qnonymous, #portal, #chell, #cave tag, #caroline tag, #g tag
190 notes · See All
Next Page