Trending Blogs
#chem II
preathbarAnswer
what courses are you taking this year?

Ones that make me wanna kill myself

…of an interview is the next few hours afterwards, in which you realize all the wrong or bs answers you gave and all the good answers you should have given.

I redid the calculation for uncertainty in the activity of alpha emissions and realized I’d screwed up the decimal places inside a square root. Threw the answer way off. At least now I know what I did wrong… and I showed my “re-work” to the manager to show that I’d found where my mistake was. Does that earn me any points? 😆

I also had wished they’d asked about decay chains instead of what isotopes emit which forms of radiation. But right afterwards I was discussing this with my team lead and it dawned on me that if I’d thought about those decay chains it would have given me some of that info. I rolled my eyes. He laughed and said he’d worked here a whole year before he made the same connection. I guess that should make me feel better….

But sheesh. Yeah. Radium-226 decays to Radon-222, so that loss of mass means it emitted alpha particles. Radium-228, on the other hand, decays to Actinium-228, so it’s not an alpha emitter. Betas, gammas, maybe even X-rays… but not alphas…. Oh, the things we realize once we are able to think again without the pressure of a panel of people asking questions to be answered orally right then….

#off topic, #way off topic, #interview, #radiochemistry, #chem ii, #me in real life, #me irl, #i hope i still get the promotion, #there are only two others being interviewed
8 notes · See All
haleighstudiesPhoto 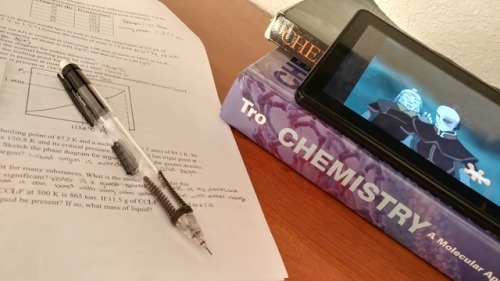 Okay guys obviously I did something wrong and I need help finding the slope for my beers law lab?? Can anybody help?? I really don’t know what I did wrong

Chemistry will be the death of me.

I wanted to sit on the ground and just cry while I was registering for classes in the IT Center. I had all these classes I wanted to take at specific times which would leave me with days off. But like always, the opposite happens. After calming down and thinking about it again, it shouldn’t be so bad. I mean I have 4 classes on monday wednesday from like 12:30 to 8:10. And then Tuesday, Thursday, and Friday, I have one class from like 11 to 12:15 which leaves me time to get a job. I just want a good professor for calc II and chem II and I’ll be happy.

“You want to shave me?” he asked as she wet the cloth and then covered his face with it.

“Hey, I’ve indulged plenty of your fantasies.” She smiled as she held the steaming towel against his skin to soften the coarse hair, and he laughed from behind it. “That is true.”

He lifted her onto the countertop between the two sinks, leaning in to kiss the tip of her nose as he pushed her hair off her shoulder. “Then by all means,” he said, tugging off his t-shirt.

So she lathered his face with the foam, but as she raised the razor, he intercepted and gripped her wrist. “I hope you’ve got a steady hand, Cupcake.”

Chemistry was amazing but this moment on the sequel caught my heart. It’s not technically bearded!Peeta because he’s about to be shaved but whatever, this scene is the cutest. Thank you Annie for this FFF and Court for the recommendation! 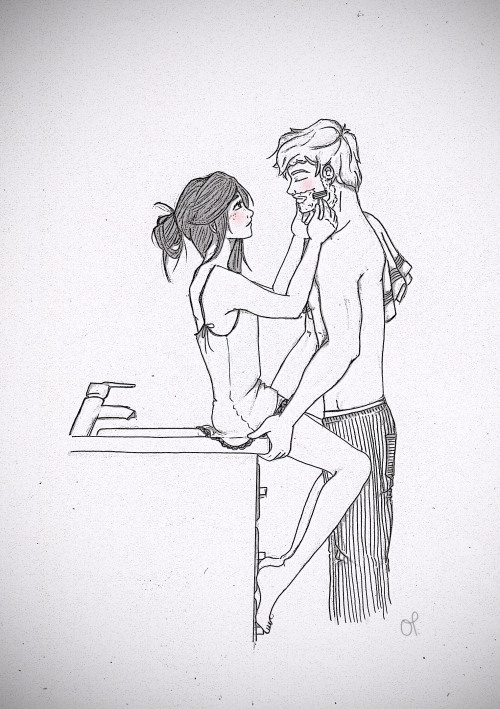 Oh my god you guys, I’m really starting to freak out about chem. It’s been over a year since I took Chem I and I remember next to nothing from it and now I’m taking Chem II and I’m pretty sure I’m going to die.

So if anyone knows anything about Chem II and wants to be awesome and teach me I will love you forever…times 12.

Went in to school at 6:30a to take a chemistry test because I was missing it to go play for hospitals for orchestra, then stayed until 6p for after school labs.

Basically, my chem teacher probably despises me now because I brought some speakers to the lab and we had a mass sing-along to “You Belong with Me” and she thought we were insane, then I nearly tripped on a rape whistle, and we made aspirin.

And that’s my day in a nutshell.