I post this study guide at an ungodly hour in the morning after staying up all night to complete this. To all those awake when I post this, I offer my deepest condolences…

I’ll be coming out with a more comprehensive study guide within the next few days, but this is what I used for my Chem I lab practical. It’s mostly the basic equations, not including concepts and whatnot. Hope this helps! :)

MORE NOTES TO BE ADDED SOON 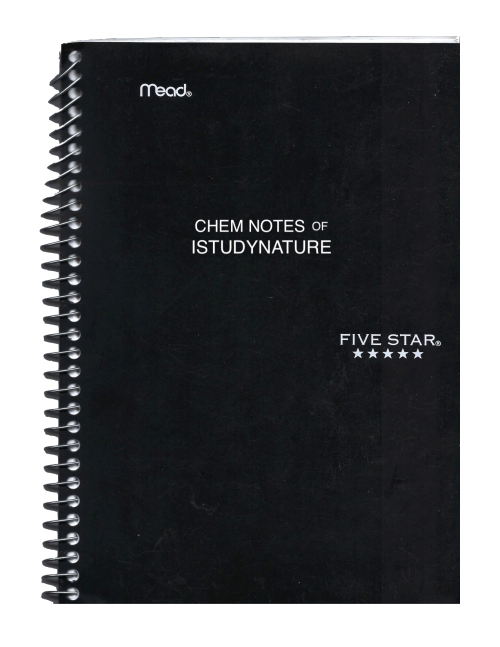 Alright, so this is weak acid/strong base and pretty straight forward. The base will completely dissociate and run the reaction to completion.

First, determine the number of mols you have of each reactant using dimensional analysis ( convert from mL of M to mols).

Third, determine the concentration of the excess OH-, since KOH will dissociate. This is your excess mols divided by the total amount of liquid used.

Finally, subtract pOH from 14. I ran the numbers and it worked fine for me.

I hope that helps, anon. There are probably other ways to solve it too, but this is how I was taught. I never actually used Ka in this example

Also, thinking about it physically can help. The pH above 7 indicates a basic solution, which makes sense with the excess OH- ions. That might be frustrating if you know you’re wrong but not why or how, though.

do any of you guys have tips on how to study for the chem ap exam? i’ve been doing workbooks and watching videos but i don’t know if it’s preparing me well and i’m getting overwhelmed pls help

I am drawing a huge blank on something pretty simple so I feel kinda dumb. I am writing a protocol for my biochemistry research for making 1L of phosphate buffered saline, and my professor recommends I use 0.15 M NaCl and 0.02 M phosphate, pH 7. I’m just confused because PBS usually has four reagents: sodium hydrogen phosphate, sodium chloride, potassium chloride and potassium dihydrogen phosphate. Is she asking me to only use the two given, or am I missing something blatantly obvious?? I apologize if the latter is the case- I am sleep and nutrient deprived.

Does anyone know the difference between calculating the change in enthalpy of vapor pressure for dispersion forces vs. polar forces

#bird's the word, #chem help, #I'm frozen on this last bit of the lab
1 notes · See All
asheachuText

Who can help me with chemistry…. I’m so bad and can’t afford to fail…. //cry

pls, anybody who is good at chem or who knows sig figs, can you tell me which one of these doesn’t have four sig figs??? I’m so confused…don’t they all have four???

#pls, #i need help, #none of my friends are answering my texts, #chem, #chem help
0 notes · See All
frostbranch-blogText

Can someone help me with this problem?

“Consider the combustion reaction between 20.0mL of liquid methanol (density=0.850g/mL) and 10.0L of oxygen gas measured at STP. The products of the reaction are CO2(g) and H2O(g).

I know you have to find the limiting reactant (O2) figure out how much water is made with that (8.035 ml) but I keep getting the wrong answer.

Are there any chem majors or students or like even teachers that could help me so I can graduate?

Stereochemistry, for those who may not have taken ochem yet, is the chemistry of isomers.  Isomers are molecules with the same chemical formula, but different arrangements.  For example, C3H6O can be either 2-propanone (acetone) or 1-propanal.   Which look like this:

(yeah I drew that on my ipad that is my ipad handwriting, hehe.)

In ochem, the type of stereochem we tend to talk about most is chirality.  Stereochemistry is actually really complex, and it’s also really important, and parts of it really tend to trip people up (I’m looking at you chirality).  I’ll try to start basic and work up to the harder stuff.  This first half is going to be terminology and drawing types.  I’ll probably be writing part two right after I write part one.  :)

To start, there are two basic types of isomers:

In ochem, we don’t really care about constitutional isomers because normally it’s not important that they are isomers.  It’s not relevant to us that acetone and propanal have the same chemical formula.  We care about stereoisomers, because a lot of the time our reaction product includes both isomers; and because those different isomers have different chemical properties.  There is a lot of chemistry revolving around producing the correct isomer and separating isomers.  For example, in the 50’s they had this drug called thalidomide that was used to eliminate morning sickness in pregnant women.  That drug, in the 50’s, caused huge deformations in babies.  Later, we find out because one isomer of the drug is safe, and the other causes birth defects.  They were selling it with both isomers, hence the “babies of thalidomide”.  Currently they still sell and use the drug containing only the single, safe, isomer.

Now, before we go any farther there are some terms you need to understand:

Note on the drawing of atoms: Stereo chemistry is confusing to a lot of people in part because of the the drawing.  You are taking something that is 3-D, and transferring it to paper and making it 2-D.  Then you make up notation for how it looks in 3-D.  For example, drawing substituates that are coming out of/going into a flat surface looks like this:

I think the most important thing to remember, especially if you are a really visual person like me and very good at picturing things, is that the molecules might rotate in space in reality but when you’re drawing and notating the do not move. Do not flip them and turn them and look at them in your brain.  Just don’t, you’ll get confused.  In life, these molecules rotate.  In chemical notation, they do not.  There’s two ways of looking at them: face on, and edge on.  Just remember that this:

Is the same thing as this:

There are three main ways of drawing molecules, and I’ll put them here in decreasing use in Ochem.

Looked at from this angle:

Has a Newman projection of:

The hydrogens can be replaced with any substituate necessary, and the colored bits are for your information and not actually part of how it’s notated.  But obviously if you want to show a long molecule this isn’t the best way.

The hydrogen should be looked at as coming out of the page,     and the CH3s at the top and bottom are going into the page.  Or, as my teacher likes to say, the arms on the side give you a hug.  This is often used in biochem because biochem deals with these enormous molecules and this lets them sort of zoom in on the relevant parts.  The just write R, R’, etc. at the top and bottom (shorthand for “rest of the molecule goes here, not to be confused with the R of chirality.).  They also use it to show sugars.

Note: When drawing molecules, the basic zig-zag (as exemplified by butane in the above drawing) is basically never correct.  It’s a shorthand for when we don’t care about representing the model in 3-d space.  Also, in reality the hydrogens aren’t important enough to assign cis/trans/e/z/r/s to.  I’ve just used this as an example.  Also, when you see the triangle and dashed triangle…it can be either a methyl group like it is, or some people like to actually write the CH3 on there.  If it’s a non-methyl substituate, then you write that in there.

I know this is probably somewhat confusing and not terribly clear because I haven’t gone into a ton of detail on how to use these things, but I promise the next entry will fix that.  This entry was just to provide you with the lexicon you’ll need to understand part two.  :)

I’m taking my SL Chem IB Exam on May 19-20. Does anyone have any tips for studying Chem both individually and as part of a study group! Any advice is much appreciated!

I have one hella confusing chemistry assignment in which I have to discuss things about the element calcium and the compound Nitric Oxide (which I just learnt is used in viagra, oops). Anyway, google proves rather useless at this point so if anyone could be of assistance, tell me things you know about Calcium’s ability to bond with itself and other atoms and what properties it has because of those bonds, what functions this allows it to have etc etc PLEASE HELP ME

WHY ARE THESE INCORRECT

#chemistry, #chem help, #homework help, #im dead serious someone explain to me why those are wrong
10 notes · See All
Next Page