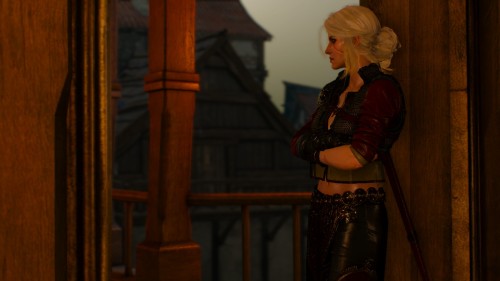 On the mountain a bright, kindhearted bard named Julian died, and Jaskier was born.

Ciri had always known that a man by the name ‘Julian’ was someone very important to Geralt. He had spoken of him often and told her stories about their adventures together to make her laugh when she was scared. He let Eskel sing and play some of Julian’s songs to her because he said he didnt have a voice for singing but he wanted her to hear them.

But judging by the way he would silently stand and leave the room when songs mentioning the 'white wolf’ were played, she suspects there was something more to it.

She recalls years ago when she had just found Geralt that people would often ask him 'where is your bard?’. There was always a flash of pain on his features.

She knew over the years that Geralt had tried to search for Julian, but had given up as it seemed the bard had disappeared. Died most likely. And Geralt mourned.

One night when it was just the two of them around a campfire he quietly whispered that his greatest regret, in all his years, was letting Julian walk away.

He never mentioned him again.

Its years later and Ciri is traipsing across the continent when she stops dead in her tracks at a familiar tune playing in a tavern. A tune she hasn’t heard in 10 years.

The bard has the tavern in rapture with his voice and lute, even as he ends the song by saying they better tip double for making him sing 'that old rubbish’ they cheer and applaud. The man handsome, tall, with a mop of brown hair and eyes as blue as the sky and shine as he smiles. He clothes are colourful and ridiculous and he throws her a wink when he sees her stating.

His smile falters and he seems on his guard. “You mistake me for someone else. I’m Jaskier”.

“Ah pity. I know a man who has spent years searching for Julian. He had thought the man died and it devastated him. But it seems maybe Julian didnt want to be found.”

Jaskier fidgets and looks away. “Why would he be looking this Julian?”

Ciri shrugs. “From the stories he told me, the songs he let me hear, and his saying that losing Julian was his greatest regret I’m thinking maybe he missed Julian. Maybe there were words left unsaid. ”

Jaskier’s hands tremble and he shoves them into his pockets. “I’m sure Julian would’ve like to hear that.”

Ciri gives him a small smile. “So Jaskier. Ever been to Kaer Morhen?”

Geralt sits in the courtyard sharpening his blades. Ciri should’ve been here two days ago and he is getting nervous.

Its nearly night when he hears Lambert’s call from the gates. He sighs in relief. Finally.

But when he reaches the gate two figures are dismounting. One with white hair and a grin that got her out of trouble too many times.

And one with blue eyes he had never thought he’d see again except for in his dreams.

i made both Falka’s tattoo

i kept .png files for all three tattoos (iorveth’s, ciri’s and geralt’s) and .psd files for ciri and iorveth. if anyone wants to use them somewhere i can send them to you

#i am doing what CDPR didn't, #the witcher, #ciri, #iorveth, #geralt of rivia
2 notes · See All
bloodyrumText

I’m glad that this blog consistently reminds people of She-Ra and Star Trek. :P And Ciri is epic! Here, I made a couple icons of her.

What 3 things come to mind when you think of my blog?

I’m surprised but happy that my blog makes you think of Avatar; I haven’t made that many posts about it!

And I love my Mermista icon. Actually, I have a lot of icons saved that I occasionally switch between. If you see one of these, it’s probably me. :P

What 3 things come to mind when you think of my blog?

Chapter 22 of The Lesser Evil my Witcher Pirate!AU is now up!!

only tattoo file that i can find is Geralt’s stupid sword-wielding-naked-woman tattoo, both on the net and among the files

either i’m going to download Wild Hunt to extract thousands of files, search through all the files most probably in vain or i’m going to make a new a tattoo inspired by the blurry original one that we can see only the half of in the game and descriptions in the book, which, like i said, won’t be CDPR-original and won’t satisfy me

would it kill the devs to share the full version of the tattoos? CDPR never listens to fans apparently

“This is not my home world, I’m here coz i’m running away from the Hunt, not to do all this…heroic thing to save this world. I cant even handle it in my home world. and yet these people believe in me?hope for me?..ugh..even if I want to feel honored..I am really not in the mood to pursue this quest. Such a heavy burden.” 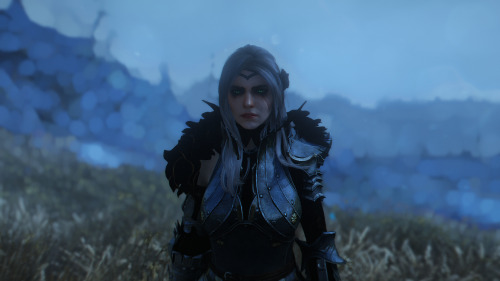 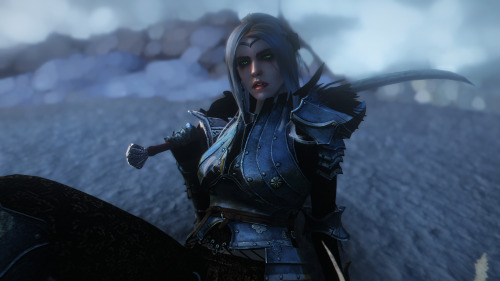 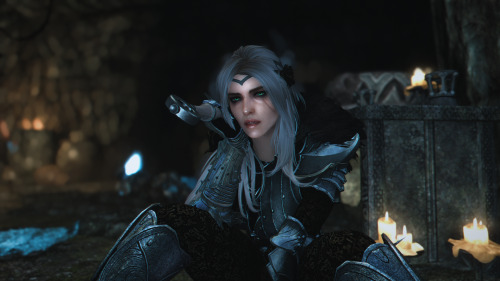 Pavetta found herself in a cave with the kind of suddenness that told her this was a dream. She felt as if her body was slightly disconnected from herself, and she moved forward, deeper into the cave, even though she didn’t know why.

Finally, she came to a wide cavern where a plush couch inexplicably sat. Pavetta didn’t feel the need to question it; she just stepped forward and sat down, waiting for something.

After what felt like both eternity and no time at all, a figure appeared before her. Pavetta knew nothing had been there a moment ago, but the abrupt appearance didn’t seem notable. The figure walked towards her and Pavetta found herself strangely unable to see any details about them – instead, all she could make out was a silhouette of white light that stood about at her own height. The figure twirled around as if they were dancing, and somehow Pavetta knew they were grinning.

“Hello, Mother,” they said, and though Pavetta clearly heard the voice, she could not remember anything about it.

ciri: what’s the best way to get revenge on someone who wronged me?

geralt: the best revenge is forgetting about it and living your life happily (◠‿◠✿)

ciri: jaskier, how do i get reven-

*holed up at kaer morhen, ciri convinces everyone to play a rousing game of ye olde dungeons and dragons*

vesemir: it is dark and quiet in the cavern, and the surface of the water seems calm. but as you skirt around the edge to get to the tunnel across, the lake starts to ripple and a thrashing creature comes bursting forth. it is a large aboleth, and it is very angry, tentacles writhing —

jaskier and yennefer: i roll to seduce

jaskier and yennefer (yelling at each other): no I roll to seduce!

jaskier and yennefer: *both roll the same number**begrudgingly high five*

vesemir:…..you both attempt to seduce the monster

vesemir: how tf are you guys doing this??? you both succeed at your seduction

jaskier and yennefer: *go into very elaborate detail and paint a kinky, yet surprisingly tender, scene of absolute filth; there are many rude hand gestures and charts*

vesemir: *has just given up; he sits at the head of the table a husk of a broken man, slumped over with his face buried in his arms*

jaskier: and boom goes the dynamite *starts playing ‘i just had sex’ on his lute*

yennefer: i wipe the artful trickle of sweat from my brow and break his lute

vesemir, tired voice coming muffled and defeated: the aboleth’s energy has been completely drained and it is too satisfied to move. you break the lute. geralt, put down the dagger. eskel. lambert. you can write your fanfic later. ciri, you’re the only one i respect. the party is free to pass, please let’s just move on

#the witcher, #witcher crack, #geralt, #yennefer, #jaskier, #julian alfred pankratz, #ciri, #cirilla fiona elen riannon, #vesemir, #eskel, #lambert, #you know they would play an intense campaign, #and get sidetracked at every opportunity, #poor vesemir has lost all control, #geralt has the most kills overall, #jaskier has the most weird/creative kills, #other characters keep trying to adopt ciri, #yennefer keeps magicking the miniatures into interesting positions, #and has somehow acquired a cult of npcs, #lambert has died the most, #eskel accidentally flipped the table when he got real into it, #the dungeons and the dragons, #dnd, #roll to seduce, #yeah i know this isn't how it works but i simplified for laffs, #text post
89 notes · See All
chichotsText
#ciri, #witcher, #the witcher, #witcher 3, #cirilla fiona elen riannon, #cirilla fanart, #fanart, #6fanarts, #Instagram
3 notes · See All
transeskelText

Ciri’s parents trying to protect her 🥺

Part of the au where ciri meets jaskier first.

#the witcher, #Jaskier, #geralt of rivia, #geraskier, #Ciri
72 notes · See All
scribblingfangirlChat
Yennefer: I'm dissapointed.
Ciri *having just stabbed a person*: I don't know what happened! I was just kinda reacting to getting hit!
Yennefer: There are better ways to handle these things than with weapons. One word: magic!
Jaskier: Eh... I think we should find a healthy medium. Next time you stab the wrong people Ciri, just stab them less hard!
#incorrect witcher quotes, #jaskier, #jaskier the witcher, #yennefer of vengerberg, #the witcher, #the Witcher Netflix, #ciri, #ciri the witcher, #cirilla of cintra, #cirilla fiona elen riannon, #incorrect witcher quote, #incorrect quotes, #viascribbles
24 notes · See All
ciriPhoto

Mean to say you’re a she-witcher? 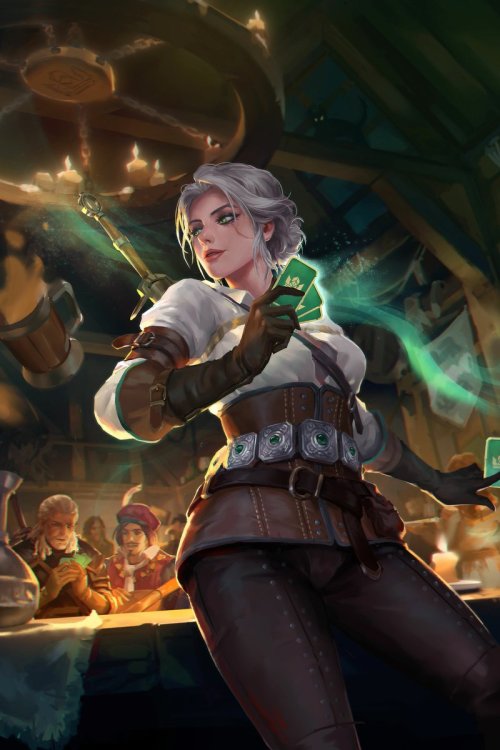