Subaru: *Does almost anything*

Kamui knocks on Subaru’s door, worry engrains in her mind. She hasn’t spoken to the onmyouji since Rainbow Bridge and while she respects Subaru’s space, she couldn’t drive out that worry when she heard the news he had came down with a flu. In her hands are bags of groceries and counter top medicine that can aid the ailing flu. She wonders if she is welcomed, chewing on her bottom lip.

Hearing the door swing open, Kamui didn’t expect that she would be swept up in a tight hug with Subaru nuzzling into her neck. His forehead is uncomfortably warm as buried his face into her neck. His embrace tightening around her, that she couldn’t stop the flare of heat warming her face. “Your here.”

Kamui blinks. Her blush cooling down, not understanding what the onmyouji is talking about. She reaches up and feels Subaru’s forehead with her fingers. Her eyes widen at how hot it feels beneath her fingertips.

“Subaru, we should go inside.” The awkwardness eased away as Kamui brings Subaru back into his apartment. She leaves the groceries at the door, toes her shoes off as she tugs Subaru to his bedroom. She nearly trips when he leans his body into hers, disproportionating her center of gravity. Setting Subaru gently on his bed, Kamui was about to go and retrieve the thermometer and the cooling pad she bought with her when Subaru’s hand finds hers. Tugging her back into his embrace. “S-Subaru?”

“Don’t go,” Subaru’s voice whispers into her ear. A plea that does crazy things to her heart and bringing back her blush that could make a fire hydrant envy. “please, Kamui.”

Kamui shivers from his hoarse voice. As much as she likes to cuddle, like right now, Subaru’s health is a top priority. “I won’t go anywhere. I’m only getting the medicine and thermometer before cooking something for you to eat.”

“Promise?” Kamui’s breath falls. The word alone sounds so fragile. She gently cups Subaru’s face in her hands, pressed her forehead against his. His green feverish eyes looking back at her, pleading for her to stay. Her thumb brushes his warm cheek, her lips spreading into a warm, reassuring smile as her violet eyes soften.

“I promise.” Kamui whispers. “I’m here. I won’t leave you.” Her words helps conviction. She’s going to help Subaru get through his flu and whatever feverish nightmares his illness decides to plague him. Her eyes drop to his lips, then with a blush, she covers his mouth with her hand, and pressed a kiss to where his lips are touching her palm. Slipping out of Subaru’s surprised arms, she help Subaru lie down.

“N-Now please lie down while I do my best to help you get better.” Kamui hastily said. She winced at her stutter as she strides to the kitchen, closing the door behind her. Her face still feels like it’s burning with the blush, couldn’t believe in her boldness. Taking a breath, Kamui shakes her head, her ponytail swishing behind her, from her jumbled thoughts that seems to center around the onmyouji and what she just done. Subaru is sick, daydreaming with her mind floating up in the clouds isn’t going to help speed up the healing process.

She can do this. Hopefully without flustering so much.

It was one of the sparring sessions, not only to help Kamui-chan in refining his techniques in hand-to-hand combat, but also to help him control his new vampire strength. The testament of how badly the trees are damaged (by accident) speaks volumes.

Kamui-chan on the offensive, and Kamui on the defensive in order to help Kamui with the experience for the first half of the training. The second half is where they switched. At most times, the sparring ends with Kamui winning. Only this time, the outcome is different with Kamui-chan pinning Kamui to the ground. Neither of them caring the state of their clothes or how the training ground and the surrounding trees had seen the better days.

“I win.” Kamui raises an amused eyebrow at the look of satisfaction in Kamui-chan’s violet eyes. Both knew that Kamui can easily changes the tables, even with his wrists fastened down to the ground.

“Do you now~?” The playful tone in Kamui’s voice should have tipped Kamui-chan off. On guard, Kamui-chan tightens his hold on Kamui’s wrists. What happens next is Kamui’s legs wrapped around his waist, Kamui rolling them until Kamui-chan’s back is flat on the ground and Kamui hovering over him with a devious smirk. His wrists free from Kamui-chan’s hold, the elder vampire’s hands pinning Kamui-chan’s wrists down. Kamui-chan feels heat blooming over his face in realising that Kamui is essentially straddling him. Then Sorata’s idea of cutting time for showering floats in his mind, further worsening the blush.

“Why are you blushing~?” Kamui-chan hastily looks away. He couldn’t tell if Kamui is teasing or being serious, even with knowing the said vampire for what feels like more than months.

“N-Nothing.” Kamui hums, seemingly curious. Kamui-chan inhales a sharp gasp at the feeling of a playful nip over his pulse.

“Are you sure about that~?” Kamui’s purrs sends shivers down his spine, accompanying it with the thrill.

“I’m sure.” Kamui-chan murmurs. Kamui makes a noise that sounds similar to disbelief, then he locks Kamui-chan’s wrists together. Holding them underneath his right hand. His finger trailing down Kamui-chan’s jawline, his fingernail gently and slowly scratching on Kamui-chan’s skin. Reaching Kamui-chan’s chin, gripping it gently and forcing the younger vampire to face him. Kamui-chan is slowly unprepared for Kamui’s lips pressing against his. He inhales a soft gasp, blinks, and succumbs to the gentle movement of their lips moving against each other in a slow dance. Kamui’s lips are warm and soft against his, and when it comes to its natural end, and Kamui breaks the kiss. Kamui-chan couldn’t stop the soft whimper that escapes from his lips, his lips chasing after Kamui’s when they pulled away. He can feel the huff of Kamui’s laugh. That was enough to make Kamui-chan eyes flutter open. He feels dazed, even under the pleased look in Kamui’s eyes and the wicked smirk on his lips.

“How needy of you~” Kamui-chan pouts. Does it help that Kamui’s lips feel good against his? No, it certainly doesn’t. Remembering Sorata’s idea. Kamui-chan hopes it works as he unconsciously licks his lips. Doing his best to ignore how Kamui’s eyes darken, Kamui-chan manages to flip Kamui back on to his back. Playfully wrestling his hands away from Kamui’s hold.

“I think we should clean up.” Kamui-chan said after looking at the state of the training ground. Kamui raises an elegant eyebrow.

“Right,” Kamui drawls playfully. “don’t tell me you didn’t enjoy my kisses as a positive reinforcement throughout the training.” Kamui-chan’s flush come back in full, his rosy red blush dusting his cheeks. Then Kamui-chan cants his head to the side, shivering from the feel of Kamui’s curved fingers trailing up the side of his thigh.

“Then maybe I should use that positive reinforcement to help me clean up with the mess we’ve just created.” There is a playful gleam in Kamui-chan’s violet eyes. One that Kamui spots.

“And what is that positive reinforcement?” Kamui-chan takes a breath. He hopes the next words that comes out will not make him fluster badly then what already had happened.

“Come to the showers and I’ll tell you there.” Kamui-chan said before getting up and hastily walking over to the dorms. It’s an open invite to Kamui, and he can take it as how he wants. It’s when Kamui-chan tugs his ruined shirt off of him in the bathroom, Kamui (after getting over his surprise and stalking after Kamui-chan) pins Kamui-chan to the tile wall. A smothering kiss pressed heated into his lips that leaves Kamui-chan moaning and wanting.

“With an offer like that, how can I refuse~?” Kamui purrs into his lips and proceeds to kiss him senselessly. The kind that leaves Kamui-chan’s knees weak.

#clamp, #trc, #x/1999, #kamuicest, #most likely in the save verse as feeding au, #this snip happened when Kamui and Kamui-chan are dating and possibly after Promised Day, #maybe??😂, #feeding au, #snip II
2 notes · See All
chimaera-bonesPhoto Last upload for today. He’ll be finished tomorrow. Clamp has always been a huge inspiration 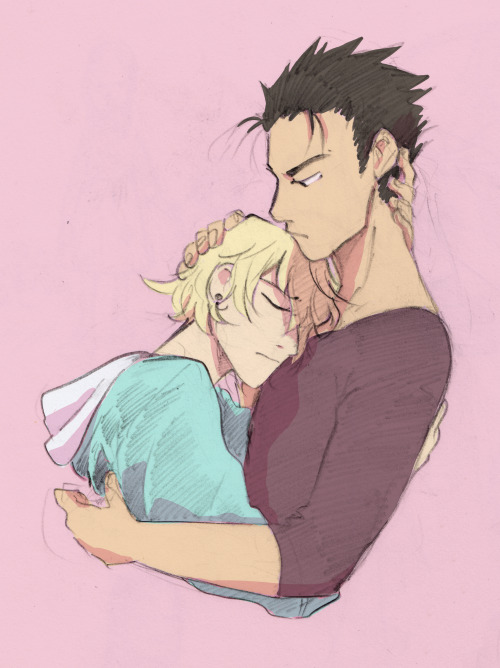 time has brought your heart to me (you and i and we, forever)

“I had a plan, you know,” Fai says, his long fingers carding gently through Kurogane’s hair. “For when your hair started to go gray.” He plucks at a dark strand of hair, tugs at it, his nose wrinkling in slight (adorable) annoyance. “It involved lots of jokes, lots of teasing. As always, you’re a plan ruiner, Kuro-sama.”

Kurogane snorts. Even after so many years, the mage can still be such a drama queen. “Not my fault your old age is starting to show before mine, mage.” He side-eyes him, and reaches over to tug at the lock of silver hair by the side of Fai’s face.

Kurogane can’t help laughing at that, because that’s rich, coming from Fai. He tugs at that silver lock again, and then cups the back of Fai’s head with his other hand, pulls him closer. There are lines now, at the corners of those beautiful blue-and-gold eyes, deep ones that speak of a long life spent laughing. In contrast, the lines on Fai’s forehead, the frown ones that used to mar his beautiful face, are all but invisible most days.

Fai huffs again, and threads his fingers through the ones in his hair, brings Kurogane’s hand to his lips. “I never thought,” he murmurs against his skin, and it sounds like a confession to Kurogane’s ears. “When I was young. Before. I never thought I would grow old next to someone. I never even hoped I would find someone I would want to grow old with. Well, other than my brother.” Lightly, reverently, he kisses every knuckle of Kurogane’s hand. “Thank you for giving me this, Kuro-sama.”

And, well, what can Kurogane do, when his husband acts as nostalgic as the old grandfather he is? “Stop talking like you’re about to kick the bucket,” he says and drags Fai into his lap. “We’re not that old, you idiot.”

He leans up and kisses the lines at the corner of Fai’s golden eye. “We still have a long life ahead of us.” 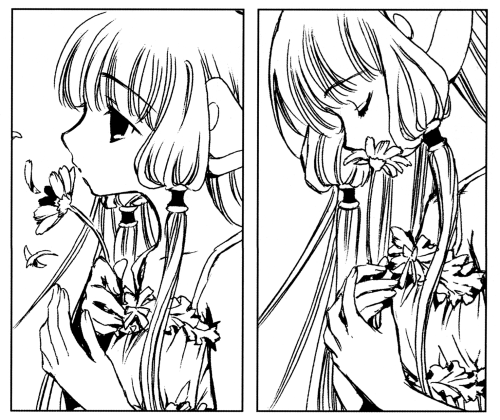 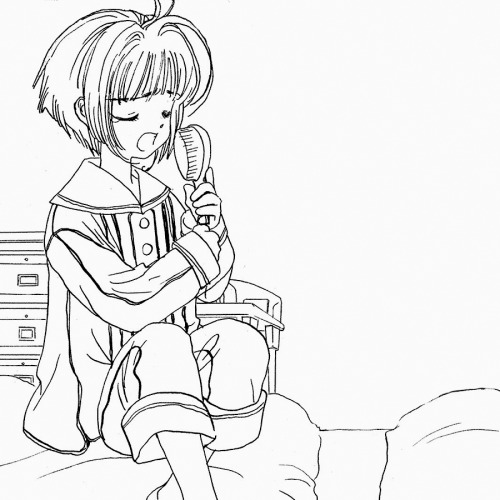 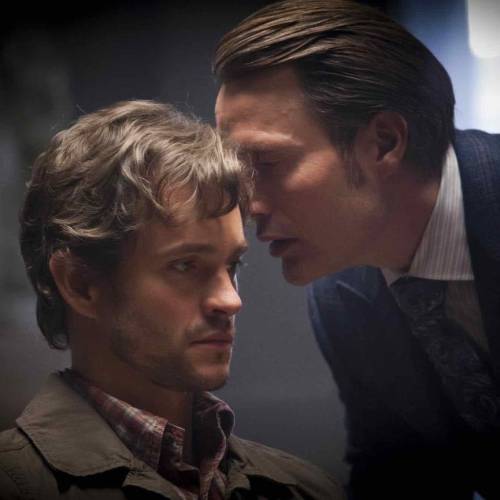 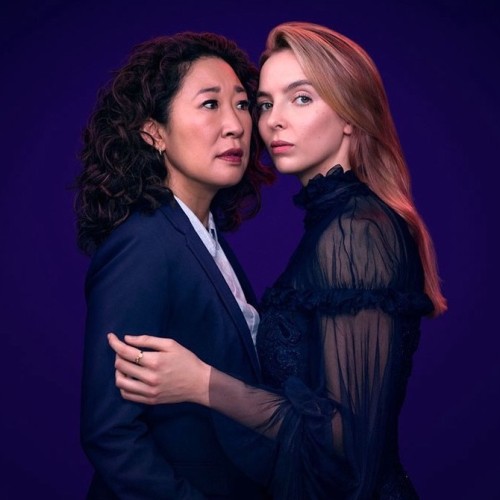 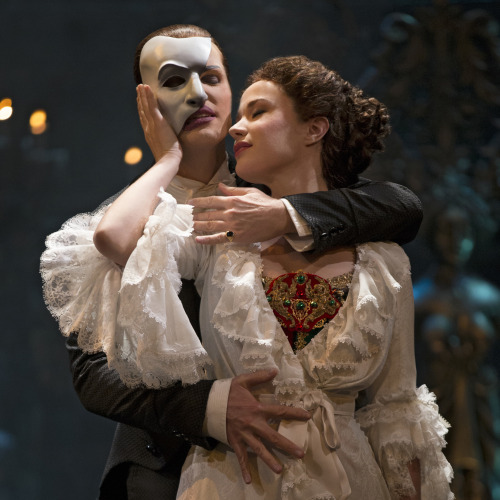 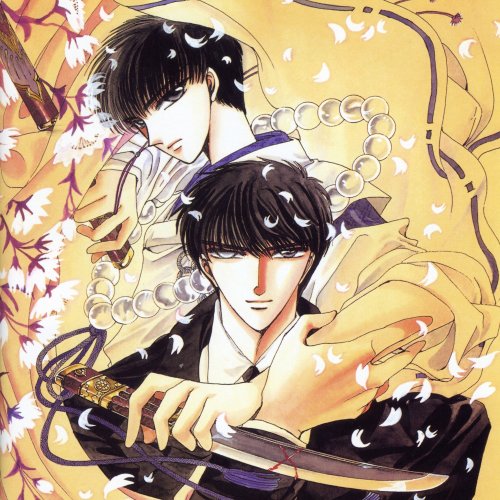 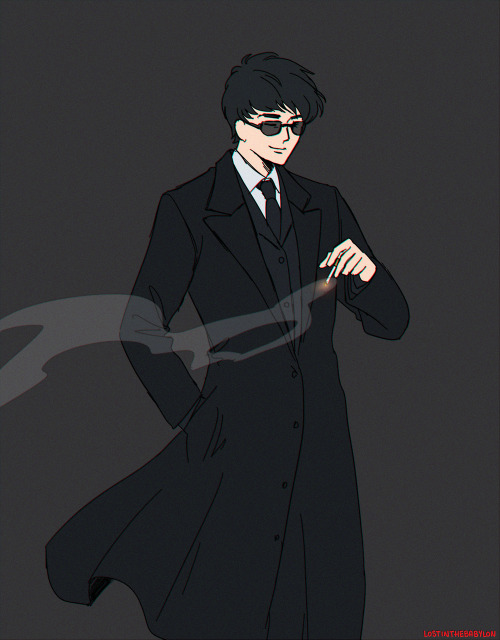 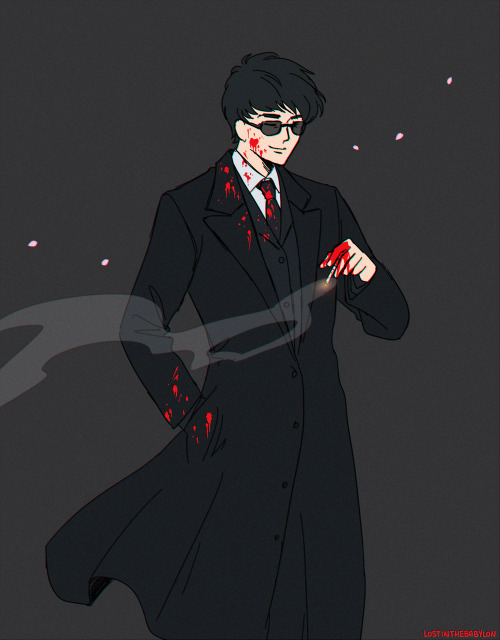 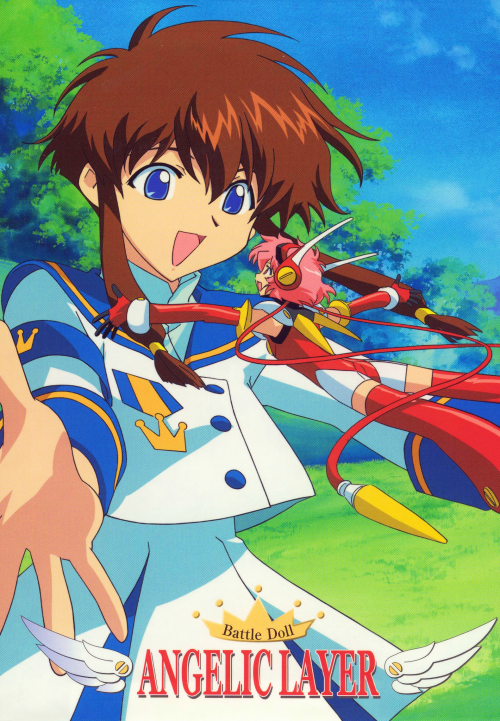 i like her design a lot but yes she had got full cameo only once…. 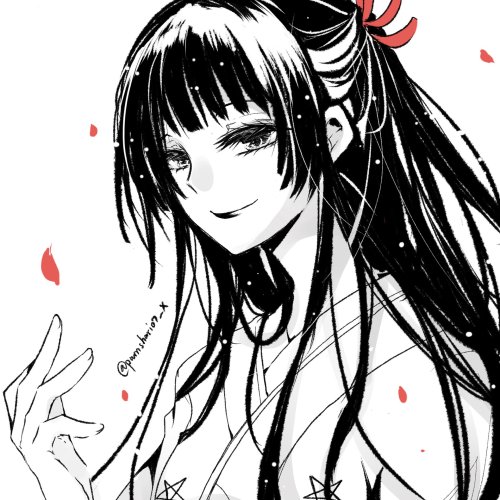 Title: When the World Ends

Series Summary: Judgment  Day arrives and the ultimate victory goes to the Dragons of Earth.   Thinking Kamui dead, Subaru whisks him away in the hopes of giving him a  final burial. When it turns out that there’s still some life in him,   his plans are changed.

Can Subaru help Kamui despite the odds? Is  it even possible to move on from such a tragedy when there’s nothing   waiting over the horizon?

Takes place after the final chapter of X/1999. 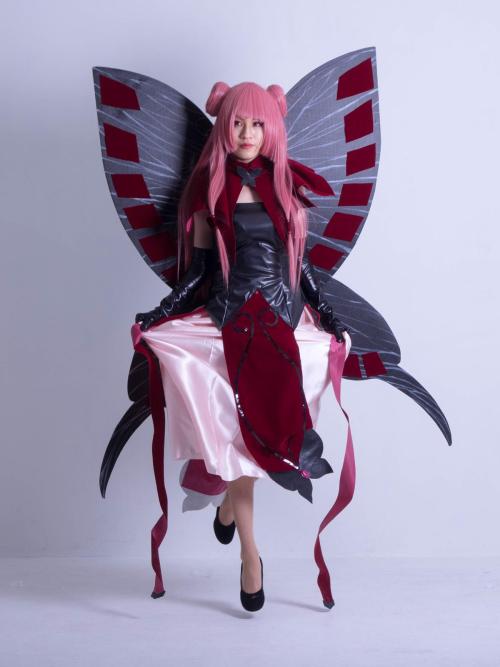 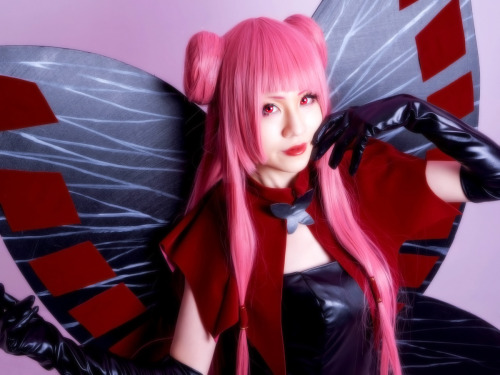 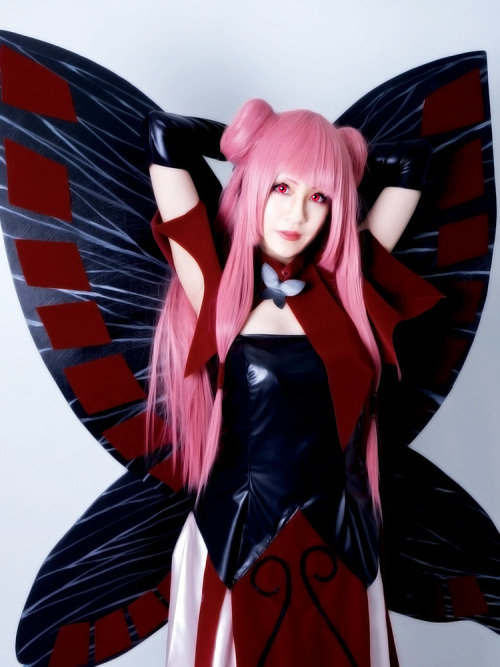