Idk when this little girl in me, started feeling too hopeless, worthless and self-judging human. How did I let her sink in darkness?

i just want what horace and vergil had

Troy is an ancient city situated on the northeast coast of Turkey. The Trojan war is a famous war, held between Troy and Sparta in Greek mythology. Homer was an author who had written one of the greatest epic poem in history named ‘Iliad’. The Trojan war was fully described in the ‘Iliad’. A brief history of Trojan war according to Troy movie (2004) is described below:

Troy was a peaceful country. Priam was the king of Troy who was very benevolent. Priam had two notable sons and they were- Hector and Paris. Hector was the greatest warrior in the Trojan army. He was a great leader, son and father. Paris was very attractive and lovable. But he wasn’t as much responsible as his elder brother Hector. On the other hand, Sparta was another ancient city in Greece. Sparta was an imoportant site in Mycenae. Mycenaean period was the most powerful period then. Menelaus was the Spartan king. Menelaus’s elder brother Agamemnon was the king of Mycenae. Agamemnon was a powerful warrior but not a good person. Menelaus was mostly a follower of his elder brother but was not as victorious as his brother. Menelaus was married to Helen, who was a beautiful lady. Helen never loved Menelaus and neither did he. Achilles was the bravest and best warrior of Sparta. Achilles was strong and careless.

Once Spartan king Menelaus invited Trojan princes Hector and Paris and were making a peaceful treaty between sparta and Troy. There, Paris fell in love with Helen and so did she. But Helen told Paris that she couldn’t be with him as she was married to Menelaus. paris made a plan to be with Helen. The next day Hector and Paris left for Troy and paris according to his plan smuggled Helen to Troy. In the middle of the journey, Paris showed Helen to Hector and explained about their affair. Hector felt embarraced of Paris. But consequently Paris convinced Hector and finally took Helen to Troy.

Meanwhile, Agamemnon and Menelaus discovered the runaway of Helen with Paris. Menelaus became furious and told Agamemnon that he wanted a revenge. Agamemnon liked that and planned to attack Troy and control the most important coastal city of Asia. Then Agamemnon commanded all the kings of Greece to gather their armies against Troy. And as Troy was a very powerful city, Agamemnon wanted to hire Achilles, the best warrior. As achilles wanted to be remembered in the history, he joined the war between Troy and Sp[arta with his young cousin Patroclus.

Hector and Paris arrived at Troy with Helen. Priam, king of Troy accepted Helen wisely as his daughter in law and named her ‘Helen of Troy. The next day Spartan army arrived at the beach of Troy and began to destroy the apollo temples of Troy. There, Briseis, cousin of Hector and Paris was praying.Achilles took Briseis and returned to the Spartan camp. agamemnon wanted to have Briseis but Achilles protested and there created a feud between them. So Achilles denied to go to the battle next day.

The next day Paris challenged Menelaus. There held a duel between them. Paris used the sword of Troy in the battle. But as Paris was very weak and he had never been to any battle, Menelaus easily took away Paris’s shield. Menelaus injured Paris in the thigh and he fell to his knees and scrawled to his brother and could not stand back again. Hector caught hold of Paris and disagreed with Menelaus and Agamemnon tom let Paris return to the battle again. Menelaus became violent saying that the rules of war had been violeted and attemted to kill Paris. Then Hector killed Menelaus immediately. Agamemnon became shocked at his brother’s sudden death and ordered the Greek armies to attack Trojans then and then. Then a great fight betweeen trojan and Greek started. In the fight Hector killed one of the powerful warrior of Grreek, Ajax. After that Greek army soon returned to their ships. Trojan King Priam started to gather his councilors to plan about attacking the Greeks. The Trojan armies were very good at archeries. So, Priam ordered his archers to attack the Greeks in the next day at day break. The Trojan archers threw flame arrows to the Greek camps. And then Hector and his armies surronded the Greek camp and attacked the Greeks. Then Patroclus was in the armor of Achilles to inspire the Greek armies as Achilles denied to fight. Hector thought Patroclus to be Achilles and killed him. When he removed the helmet, he realized that the one he killed wasn’t Achilles but his cousin Patroclus. Achilles heard about the death of his cousin and became raged in anger.

The next day Achilles challenged Hector for a dual. Hector got prepared for the battle. Hector was sure of his demise and so he in the previous night showed his wife Andromache a secret tunnel out of Troy. He also told her to rescue as much Trojans as she could when there would be a full battle in the city of Troy.

There held a great dual between Achilles and Hector. Both of them were so courageous and strong. But eventually Achilles killed Hector and took his body with him to the Greek camp. At this Praim got hurt. So, in the middle of the night, Priam went to the Greek camp in disguise and rerquested Achilles to return his son’s death body to him as his son deserved an honour of proper burial. achilles was pleased with the courage of Priam and returned his son’s body and Briseis to Priam and told him that Hector was the best warrior Achilles ever fighted. And then Achilles announced a 12 days off of the battle for Hector’s funeral. Agamemnon became angry at that. At that time Odysseus, king of Ithaca, planned to build a great Trojan horse and told Agamemnon that they could attack troy by hiding in that horse.

The Trojan thought the Trojan horse to be a blessing from the sea God Poseidon ans accepted that. At the dead of the night, The Greeks came out of the horse and began to destroy Troy. At that time, Hector’s wife Andromache led Paris and otherTrojans through the secret tunnel. Paris left Helen telling that he would come with Briseis and went to find Briseis. On the other hand, Achilles kept searching the Troy for Briseis as he fell in love with her. Priam watched the Greeks destroying all the Trojan religiousa datatues and claimed that Greeks had no respect for the God. Then,Agamemnon killed Praimand caught hold of Briseis and tried to enslave her. But at that time, Briseis killed Agamemnon with a blade she was hiding in her back. Then Achilles came running and found Brisies there. Paris found them both, shooted Achilles with arrows several times in the heels and killed him. Briseis burst into tears but Paris took her with him and left for the tunnel out of Troy. At last Odysseus found Achilles’s body and arranged a funeral for him.

The battle of troy was a great battle but none of the side won the battle as both of the king got  killed. The beautiful city Of Troy got destroyed because of jealousy, stubbornness and love. “If people did not sometimes do silly things, nothing intelligent would ever get done.”

Yess! “Marbles” is so casual! And the fact they attached the name of Elgin on them is even worse. They should replace the “Elgin” with “Parthenon” to show were those artifacts belong.

I find extremely fascinating reading Mary Shelley’s Frankenstein. I love her effort into describing the way the human race pursued progress and knowledge, both by the narrative of the creature’s discovery of the wolrd in book two ad by the plot in its entirety, that focuses on the human desire to overcome nature-imposed limits, making Victor similar to Dante’s Ulysses, if you wish 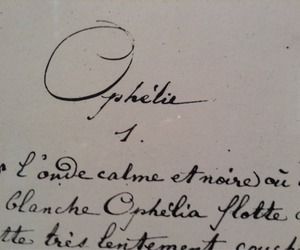 Great webinar today from the AIA/SCS. This was one of (several) resources.

If the Goddess of beauty can have curves, so can you <3

Richard Tuttle, Renaissance Unframed #15, 1994, from a series of twenty-five encaustic monotype paintings on muslin with a sculptural dimension.
Sizes range from 13 x 20 to 17 x 55 inches + one Encaustic Drawing with companion sculpture

“Renaissance Unframed #1-25 is a series of twenty-five encaustic paintings on muslin, pinned loosely on the wall, and presenting a sculptural dimension in their draping and folding.Freely applying pigmented encaustic wax onto a silkscreen, Richard Tuttle printed one by one the lengths of weaver’s muslin, which absorbed the hot wax into its fibers. Using this method, he created unique works using multiple techniques at Graphicstudio.The sculpture Renaissance Unframed #26 completes the artist’s concept of this series, a complex tapestry of ideas involving the cultural development of western civilization from the Greeks. The small two-part bronze sculpture, cast from a Styrofoam carving, possesses the mysterious presence of an ancient artifact”

–INSTITUTE FOR RESEARCH IN ART AT THE UNIVERSITY OF SOUTH FLORIDA, TAMPA 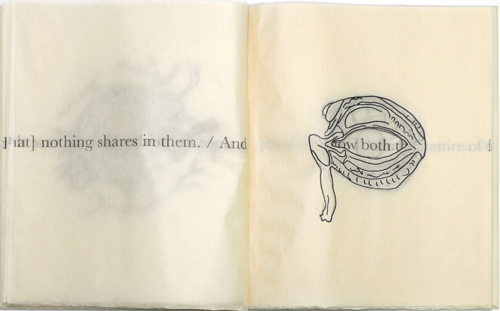 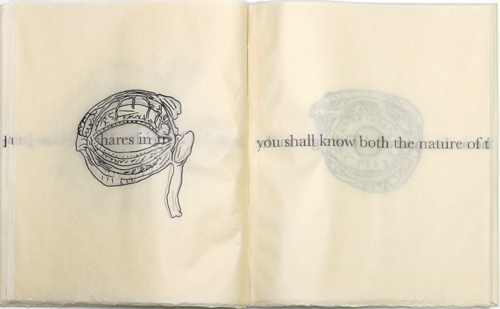 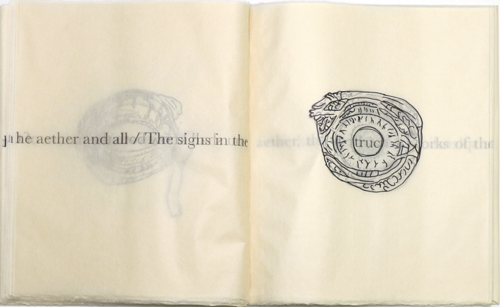 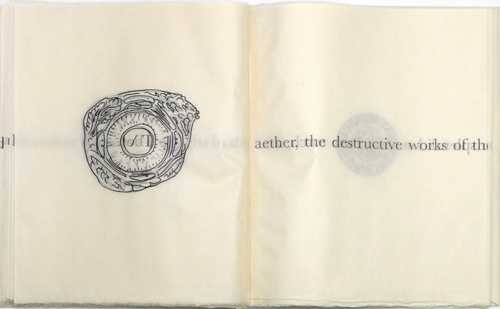 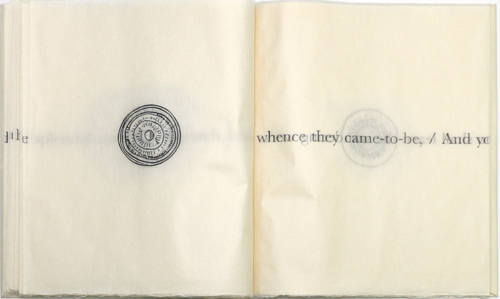 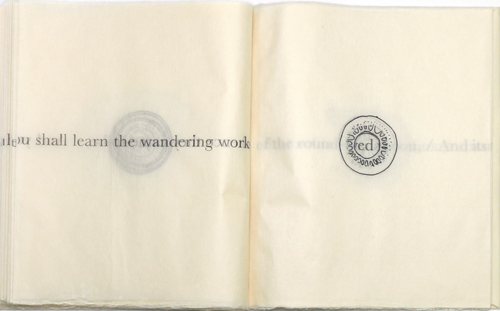 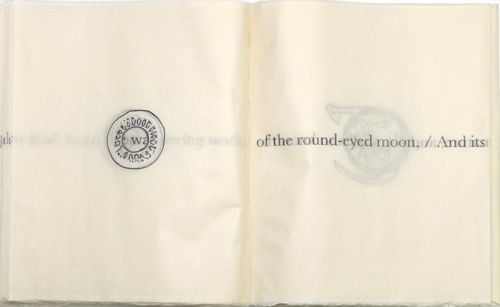 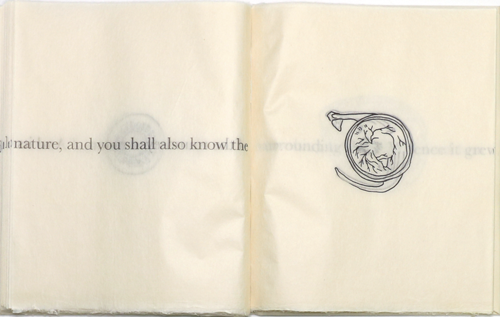 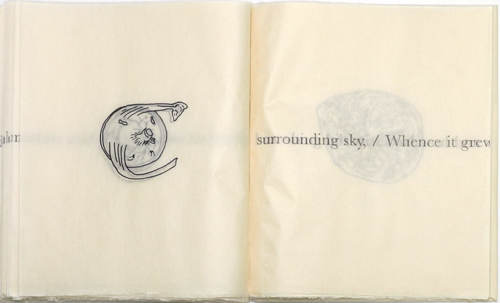 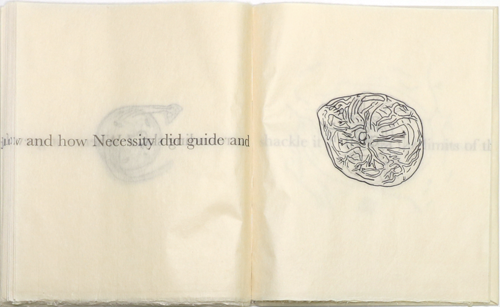 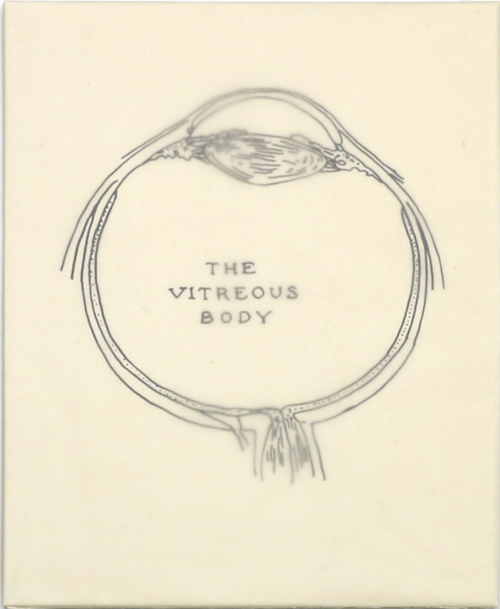 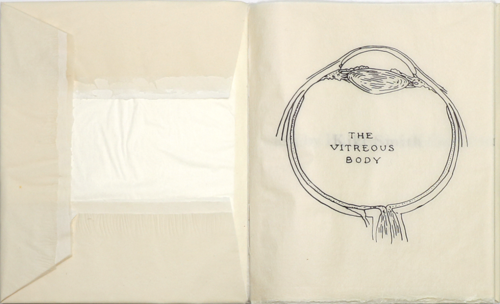 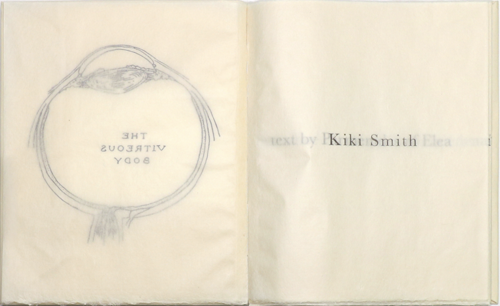 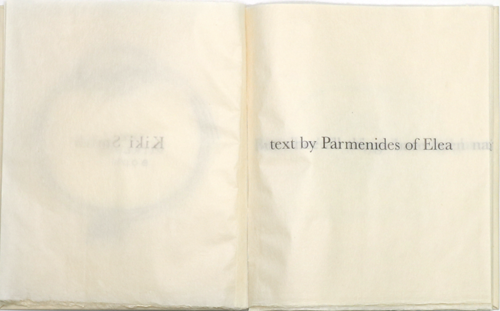 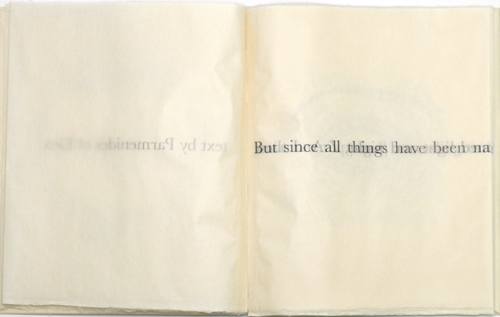 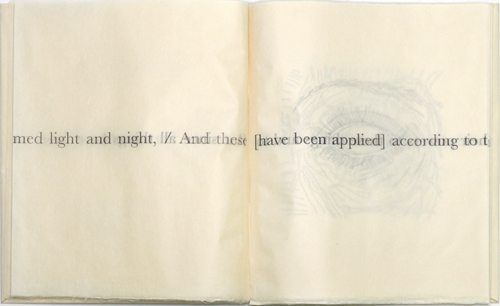 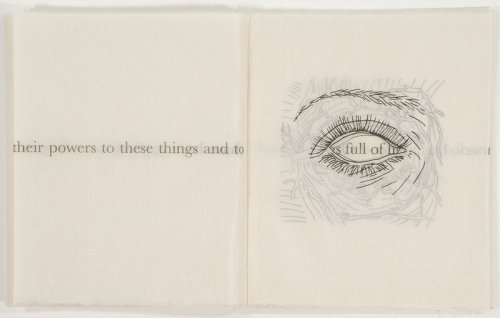 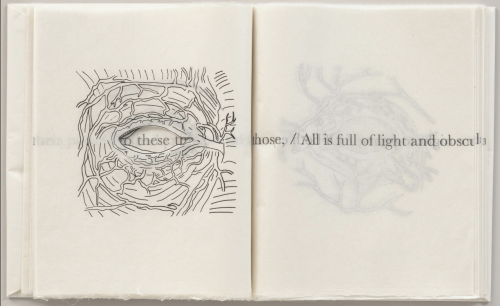 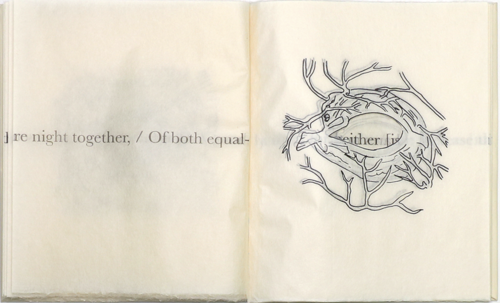 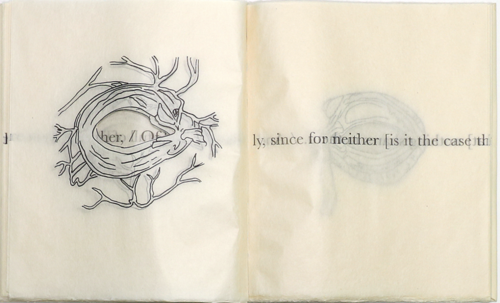 Richard Tuttle, Renaissance Unframed #14, 1994, from a series of twenty-five encaustic monotype paintings on muslin with a sculptural dimension.
Sizes range from 13 x 20 to 17 x 55 inches + one Encaustic Drawing with companion sculpture

“Renaissance Unframed #1-25 is a series of twenty-five encaustic paintings on muslin, pinned loosely on the wall, and presenting a sculptural dimension in their draping and folding.Freely applying pigmented encaustic wax onto a silkscreen, Richard Tuttle printed one by one the lengths of weaver’s muslin, which absorbed the hot wax into its fibers. Using this method, he created unique works using multiple techniques at Graphicstudio.The sculpture Renaissance Unframed #26 completes the artist’s concept of this series, a complex tapestry of ideas involving the cultural development of western civilization from the Greeks. The small two-part bronze sculpture, cast from a Styrofoam carving, possesses the mysterious presence of an ancient artifact”

–INSTITUTE FOR RESEARCH IN ART AT THE UNIVERSITY OF SOUTH FLORIDA, TAMPA 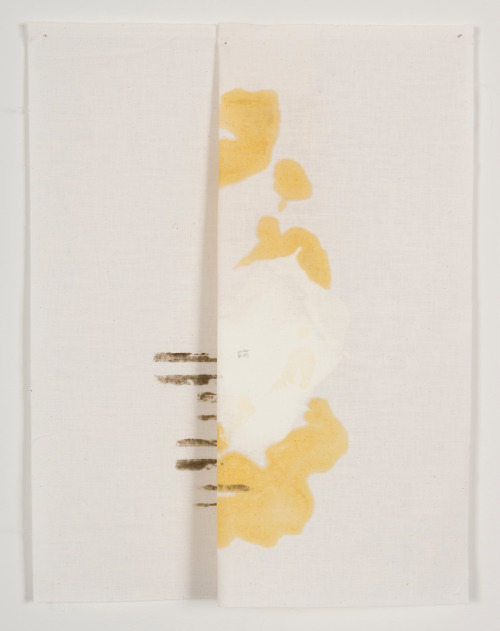 I haven’t read these since, at the very least, high school, maybe as far back as junior high, for Looking-Glass. I absolutely adore everything about Wonderland, but in this reading it became very clear very quickly that the only great parts of Looking-Glass are Jabberwocky and The Walrus and the Carpenter. Everything else just meanders along far to leisurely. 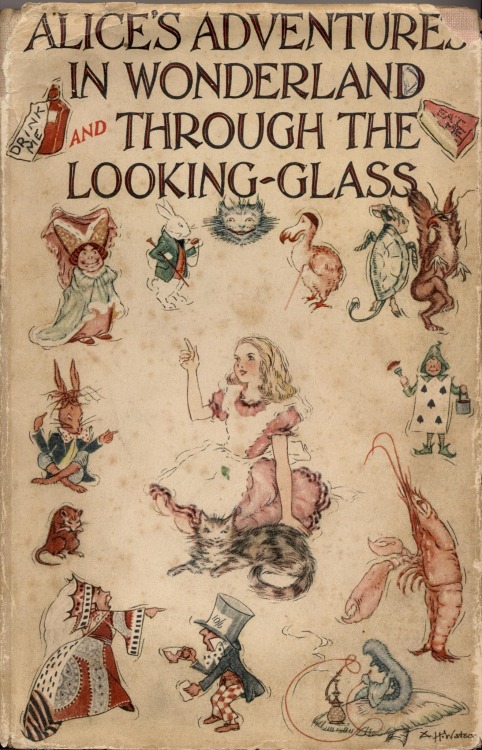 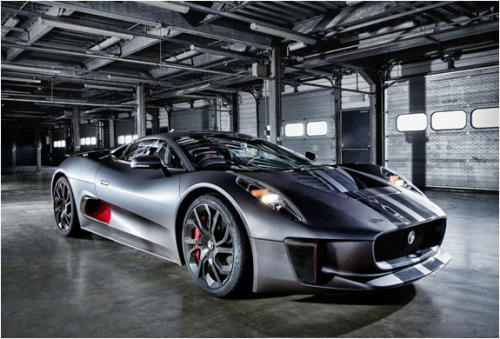