Long ago the four nations lived together in harmony.

Then everything changed when the fire nation attacked.

So, I love these rabbits and I can’t stop drawing them.

Summary: The juniors have a day off at the Cloud Recesses and decide to spend it somewhere special.

It was a cloudy, windy day in the Cloud Recesses, as was to be expected of a place residing high up in the clouds. Lan Sizhui stared at the sky as he waited outside Lan Jingyi’s room, waiting for him to get ready and come out. Ouyang Zizhen and Jin Ling were residing in rooms on the far corner of the same side of the building, so they were not staying too far away from Lan Jingyi or Lan Sizhui.

They were close enough that Sizhui could spot them from where he stood if they came out of their rooms before Lan Jingyi did. A strong gust of wind blew past Sizhui, making him tighten his robes around himself with a shudder. No matter how long he stayed in the Cloud Recesses, he always felt a chill going down to his bones when the cold hit him.

Maybe it had something to do with the Burial Mounds. Before Sizhui could think further on that topic, he hears a door opening, but it wasn’t Lan Jingyi’s. It was Jin Ling’s. Ouyang Zizhen came out of his room just moments later, and the two seemed to talk about something that made Jin Ling smile, to Sizhui’s surprise, before he elbowed Ouyang Zizhen’s side and made him laugh. As they approached Sizhui, Ouyang Zizhen nudged Jin Ling back.

By the time they had both reached Lan Sizhui, and Lan Jingyi had finally opened the door to his room, Jin Ling and Ouyang Zizhen had broken into a fight, full of pinching and pushing and tugging.

Lan Sizhui cleared his throat. “Shall we get going now?” Jin Ling and Ouyang Zizhen froze in their places and blinked at Sizhui. Without waiting for their response, Sizhui turned away from them and began to walk.

He heard Jingyi speaking up behind him and saw him ushering the two boys to join him form the corner of his eye. “Come on, then!”

“Where are we going?” Ouyang Zizhen piped up as he and Jin Ling joined them.

“Yeah, and why did we have to wake up so early in the morning?” Jin Ling complained.

“We’re here,” Sizhui said, before the boys could begin arguing amongst themselves.

“Are those rabbits?!” Ouyang Zizhen exclaimed delightedly. Lan Sizhui exchanged a look with Lan Jingyi before they both nodded their heads. “Can I—”

“Yes, you’re allowed to pet them,” Jin Ling cut Ouyang Zizhen off with a response. Sizhui blinked in surprise, not knowing how Jin Ling was so sure of the fact.

“Have you been here before, Jin Ling?” Sizhui asked.

Jin Ling flushed slightly before shaking his head. “No, I haven’t. But I’ve heard about this place from Jiujiu. He said I should give the rabbits a visit to make sure Wei Wuxian and your Hanguang-Jun hadn’t eaten them.”

“Yes, and Wei-gongzi loves these rabbits too much to turn them into stew,” Lan Sizhui added.

Suddenly another gasp was heard from Ouyang Zizhen, who was holding onto a rabbit. “Lan Sizhui! Don’t say that! The rabbits can hear you.”

Jin Ling rolled his eyes as he went to sit down next to Ouyang Zizhen. “As if they can understand him…or you.”

Sizhui watched as Ouyang Zizhen kept a rabbit on Jin Ling’s lap. Jin Ling expertly grabbed onto it and sat it down comfortably in his lap before he began to pet it. Lan Sizhui found the sight to be truly adorable.

“So, you’re saying that these rabbits can understand you, then? Are you a rabbit whisperer, Young Mistress?”

Lan Sizhui shook his head with a soft, fond smile on his face as he walked over to join his friends in petting the rabbits, with the sounds of Jin Ling and Lan Jingyi arguing surrounding them.

a present for lan zhan. 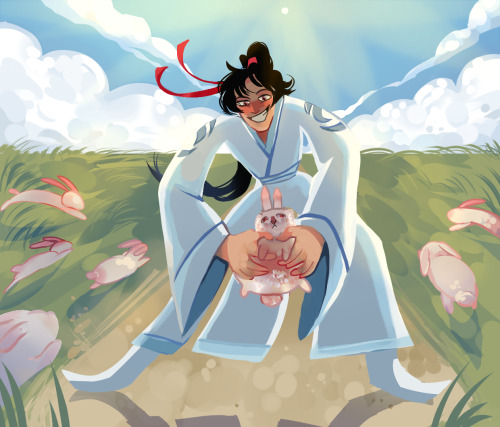 “His eyes were of a gentler, darker shade. This was Lan Huan, the leader of the GusuLan Sect—ZeWu-Jun, Lan XiChen.”

I love Lan Xichen. First of the ‘Twin Jades of Lan’. With a calm and gentle nature. Also estranged from his father and mother. Managing a cranky uncle, the responsibility of the Lan Clan - all those rues - and still looking out for his younger brother whom he obviously loves dearly.

My friend and I agreed that he seems very much like Lord Elrond in The Lord of The Rings. So I’ve put him here at the Cloud Recesses…or is it Rivendell? 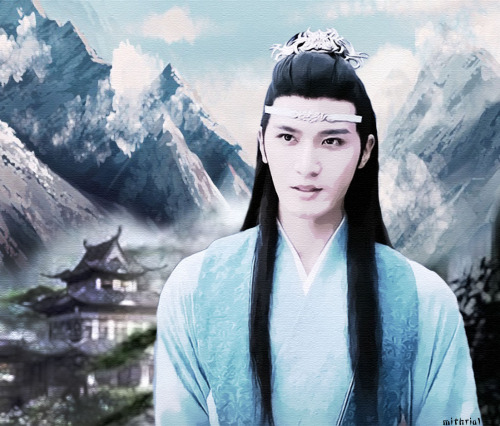 thought wei ying was upset… turns out it was just ants. 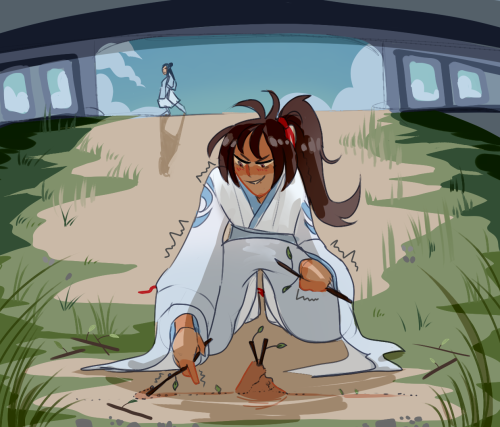 #the untamed, #cql, #mdzs, #theuntamededit, #mdzsedit, #m, #cloud recesses, #these are shit but i love these scenes
63 notes · See All
time-flies-byText

The Untamed Ep8, collage 1: No Goodbyes

The Untamed Ep7, collage 20: A Realisation

In the donghua, we see an injured Lan WangJi holding his ground vs the Wens in front of the burning Library Pavilion

#happy sunday everyone!!!, #mdzs thoughts, #cloud recesses, #twin jades of lan, #donghua, #i know lwj is sentimental but the building is LOST, #and he's not about to sacrifice himself for a building like cmon, #lxc and any other disciples with him need time to collect the books, #lwj is giving them that time, #both tasks are dangerous both twin jades could die, #and just imagine lwj later at the wen camp, #with lxc missing, #the last time being he saw him inside a burning building, #smoke inhalation can kill who knows if he's ok not lwj, #the same goes for lxc, #not knowing if lwj survived the fight vs the wens
75 notes · See All
korpikorppiText

The Untamed Ep7, collage 16: An Apology

Let’s not forget how Zewu Jun just casually cast an anti-spy force field over the buildings in this scene. The man has Power.