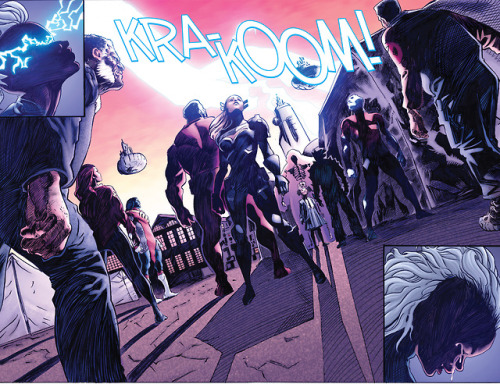 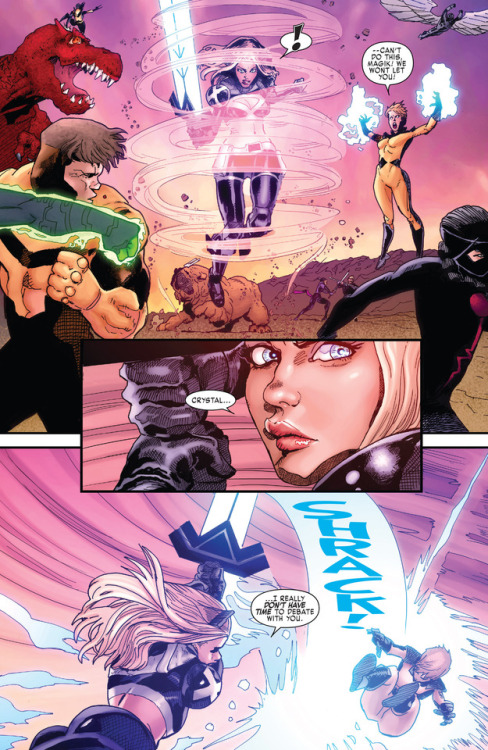 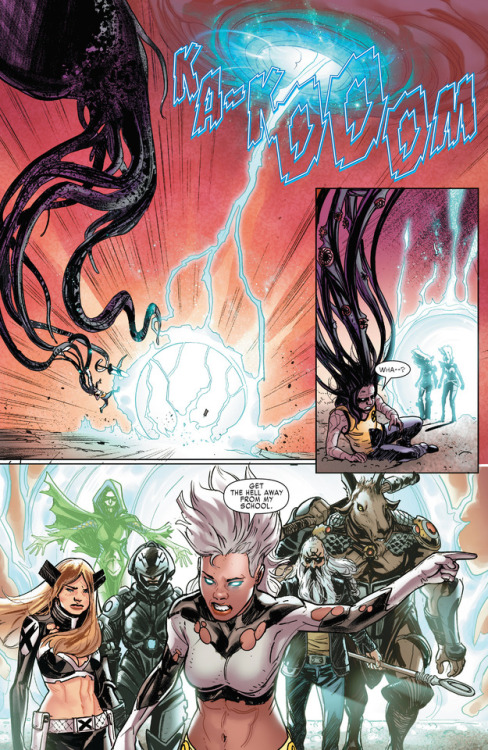 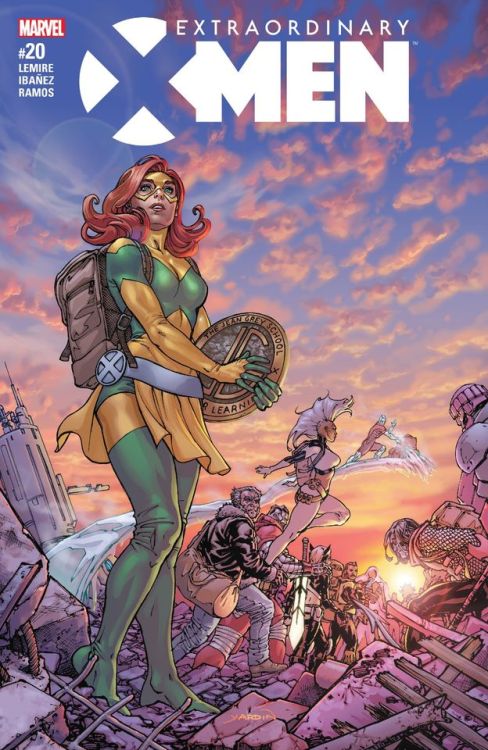 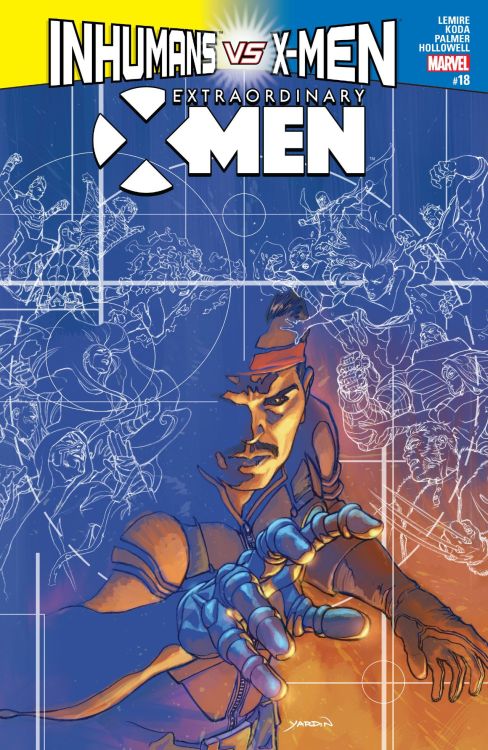 Spider-Man/Deadpool #4. OMG. If you like Spideypool, you need this series. It’s everything we love from our fanfics (except for them kissing or fucking) but still, it’s exactly the dynamic I want in a Spider-Man and Deadpool team up, and this issue had so much greatness and the last 2 pages were just… OMG. I love this series so much.

Deadpool #10. Whelp. Shit just got real. Sabertooth has decided to make amends to Wade by taking the blame himself and not revealing that Wade himself killed his own parents. Unfortunately for him, Wade is determined to kill him for his crimes. And he might have just the way to do it.

Deadpool and the Mercs for Money #3. Deadpool and his team are putting up a robot that can predict the future up for the highest bidder with a bunch of bad guys. If I didn’t pick up nearly everything with Deadpool in it, I might not be getting this one. It’s fine, certainly not terrible (like Merc with a Mouth) but it’s just nowhere near as good as the main series or Spider-Man/Deadpool. And it just doesn’t seem to fit with what’s going on with Deadpool’s attitude and events going on in the other Deadpool series (like him trying to do good and be an Avenger).

All-New All Different Avengers #8 and Uncanny Avengers #8. Right in the think of the Stand-off event. I haven’t been bothering with the other parts of this event, but these two stand on their own enough. The two Avengers teams are trapped in a bubble with their memories wiped. While it’s fun to see their alternate selves, the real high-light of these two issues is Deadpool. First, the return of his porn-stache. Then, he gets to tell off Tony at last AND claim his right to be on the team. Last, we get to see his soft spot and care with kids again. Love.

Extraordinary X-Men #9 Very little of Horseman of Apocalypse Deadpool unfortunately, and I’m not a huge fan of the alt team of X-Men, so I didn’t think an issue focused pretty exclusively on them would be of much interest, but despite not really knowing these characters much, enjoyed this issue more than I thought I would.

Captain Marvel #4 Space adventures with the Captain and Alpha Flight. There’s a powerful alien race gunning for Captain Marvel, mistaking her symbol for that of the Kree, and they won’t stop until they destroy her and the Earth. Unfortunately, a sabuteur on board is making things go even more wrong for Captain Marvel. This is a solid story, but I think I’d like it better reading it in a graphic novel rather than issue to issue. 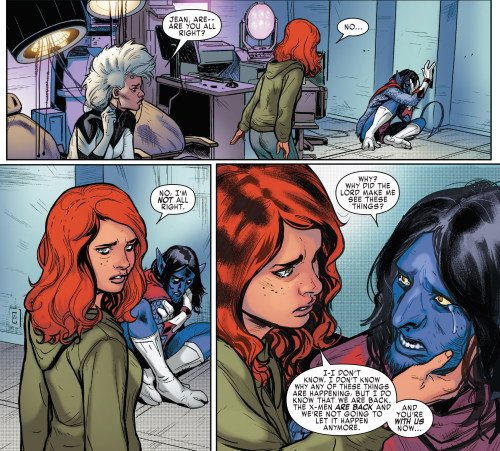 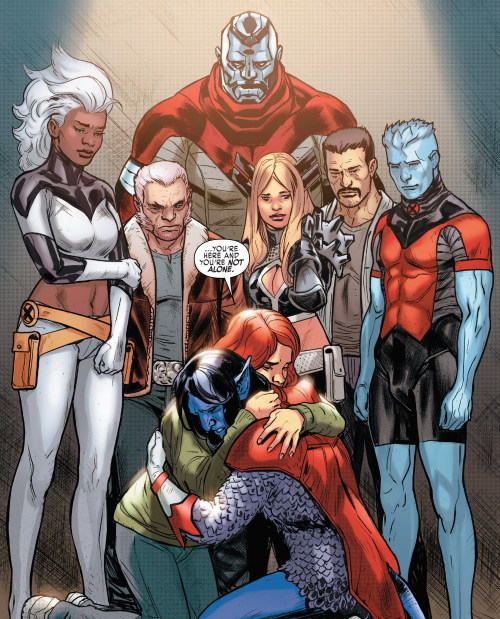 One of the most Gorgeous X-Lady ever!! <3 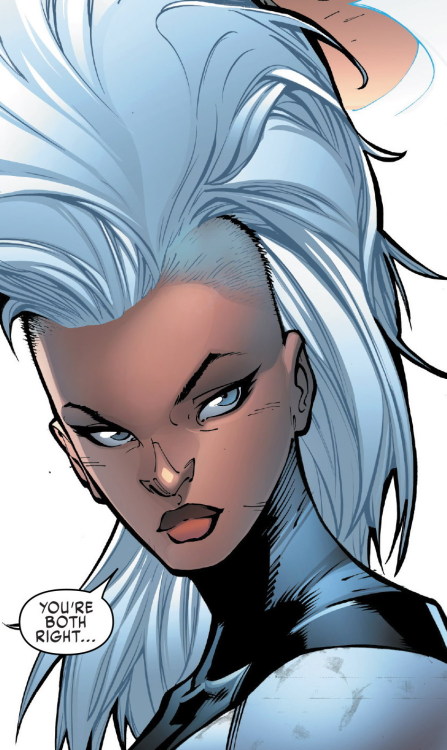 “Please tell me … am I doing the right thing Professor X?” - Storm 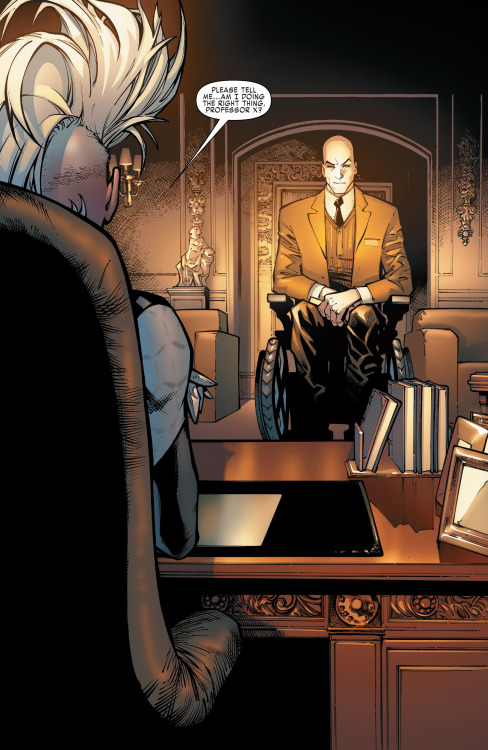 Give some credit if you use it, thanks~ 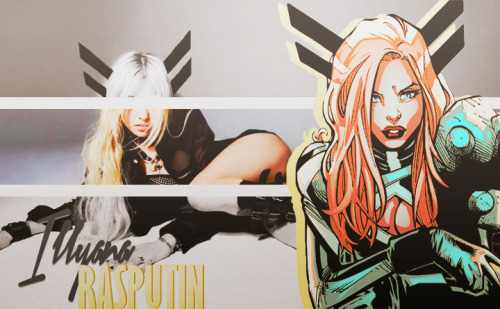 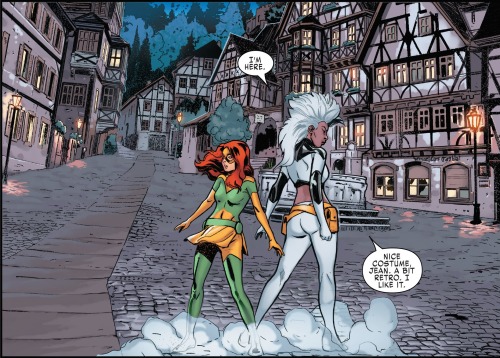 Uncanny Avengers #5:
We start with a gorgeous cover with one of my old favorite ships: Gambit and Rogue <3
Rogue, Johnny Storm, Cable, and Deadpool are hunting down the Red Skull for Steve Rogers, and based on the cover, it should come to no surprise who they run into. With a unexpected twist at the end, I found this issue quite fun. There was a few cute things with Deadpool, though this was more a Rogue-focused issue. I like Rogue, so that’s a-okay in my book!

Deadpool & The Mercs for Money #1
Deadpool and his new crew have been hired to retrieve a crate, but of course things don’t go as planned. I don’t love the new side characters but since it looks like they’re sticking around in both this side series and the main series, I appreciate getting a chance to meet them more and get a better sense of who these guys are. If I wasn’t a slut for Deadpool, I’m not sure I’d be reading this.

New artist means I’m finally checking this series out. I’ve had a fondness for X-Men from the 90’s cartoon series, and dabbled a little in the comics but never really got into them until I started listening to Rachel & Miles X-Plain the X-Men, but since I came across her a few years ago, I have ADORED Magik. This issues a pretty good jumping on point. The Terrigen mists that activate Inhumans is poisonous to mutants, the X-Men are hiding out in a hellish dimension called Limbo. You’re caught up. This is a good mix of X-Men who I like doing the whole few against a world that hates and fears them but still saving the day. With the new artist, I might keep following this one. 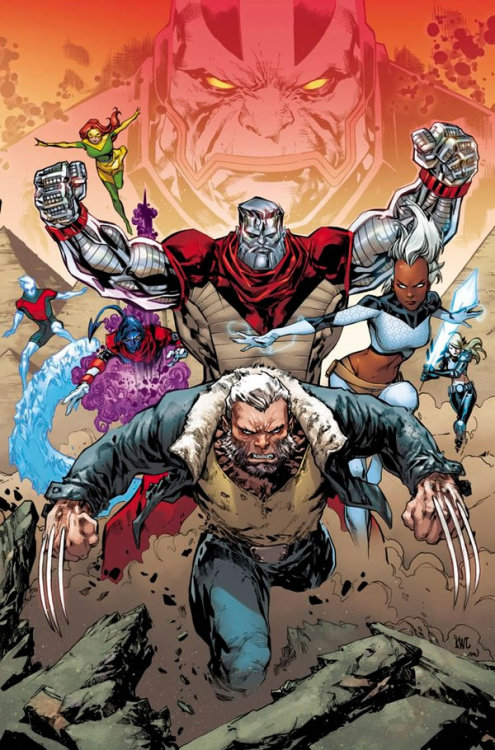 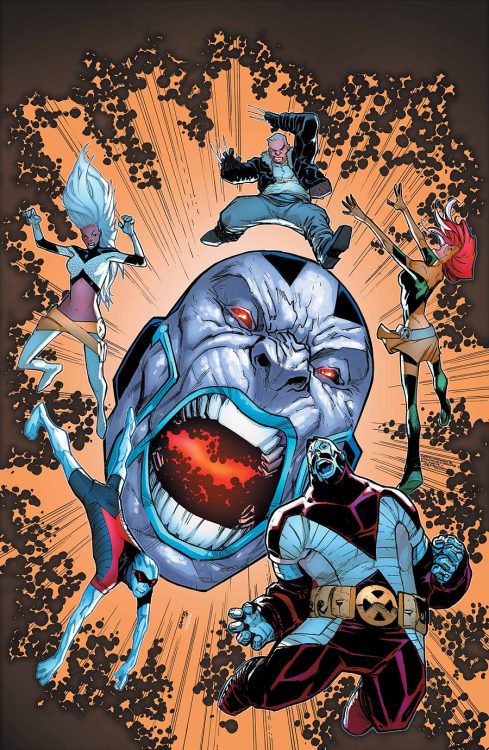 My exasperation with the Extraordinary X-Men storyline reminds me of the criticisms people have lobbied against common lgbt fiction, fiction about disabled people written by able-bodied people, and fiction about racial or gender oppression written by people who’ve never experience either. 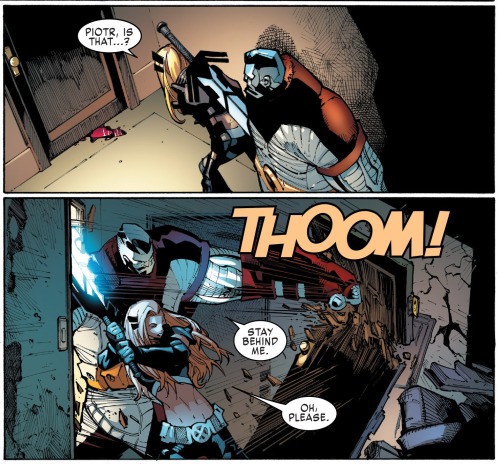 They find her in the danger room.

They find everyone in the danger room, but only two of them alive.

“Jubilee,” Storm calls out without thinking, rushing forward into the room before taking into account the horrible stillness, the bodies strewn about. Glob Herman, shiny and lifeless on the floor. Quentin Quire, unmoving, his arm still around Evan Sabah Nur’s body. Trevor Hawkins, all of his eyes staring blankly. Idie Okonkwo, huddled in on herself like she could stop the Terrigen mists from wracking her body with the seizures.

Betsy and Rachel remain frozen at the doorway in horror, but Storm marches across the floor, her boots echoing in the dead silence. “Jubilee,” she says again, kneeling in front of her teammate.

In her arms, Shogo seems blissfully unaware of the carnage around them. He burbles and blinks up at Ororo, wriggling in his mother’s grasp. “Jubilee.”

“I thought,” Jubilee says, finally meeting Storm’s eyes with her own bloodshot stare, “that we would be safe in the danger room.” Roxanne Washington lies beside her, dead. “I- I don’t need to breathe, so I was fine…” Trembling, she slams the back of her head against the wall behind her. “Ororo.”

“I’m so sorry,” Storm whispers, trying to help Jubilee up. “I’m so sorry. I’m so sorry.” There is nothing to say, there is no way to change it, this feeling will never leave her. Ever.

“We have to bury them,” Jubilee manages as she stands, clutching Shogo like a lifeline. “We have to treat them like they were people.”

When the news begins to get around, it runs a rift through the Uncanny Avengers. Rogue’s still working out what the hell she’s supposed to do when there’s a knock at her door.

Piotr Rasputin is the last person she expects to see on the other side, yet there he is. “Rogue,” he says as a greeting, and then his hands are on her shoulders and his mouth is on hers.

“Is that enough?” he asks when he backs away, looking pale but at least upright.

“The mists don’t affect me in my organic steel form,” he explains. “Will that be enough to keep you safe?”

“I…” she says, trying to work out what’s just happened. “Yes,” she says finally, and then he’s already walking away. “Pete!”

“My point is,” Emma drones on in her diamond form to Ororo, who frankly doesn’t much care what her point is, “we can handle the air quality.” She gestures between herself and Bobby, who’s iced over and has been for months on end. “You can’t.”

“I will let you know what I can and cannot handle,” Storm says, marching forward faster so the two of them have to scurry to keep up with her. “I control the wind and the atmosphere around me. I can keep away this… environmental hazard.”

“Bobby, I can’t believe you’re taking her side-”

“There are no sides in this, Munroe,” Emma says, sliding between Storm and Iceman. “Except for two. Us and them.”