I wish there was a consequence of choosing to go to the Tower instead of choosing to fight the demon head on in Redcliffe. Reagan mentions himself that the more time is delayed, the worse the situation could get. I hoped for bigger stakes instead of just that quest being put on permanent pause until you get back from the mages. Like Isolde possibly dying or the demon becoming a stronger boss. 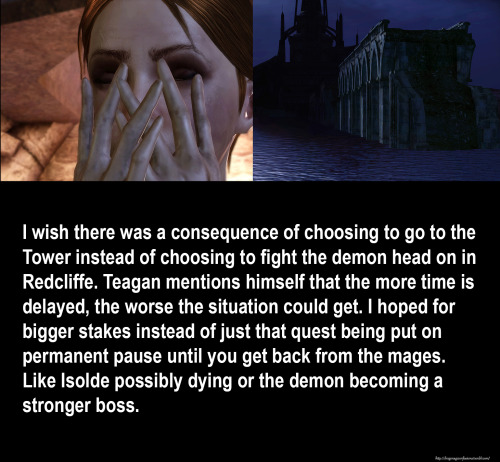 I generally lean towards more canon-compliant depictions when drawing characters for the first time EXCEPT, well, first of all, I tried to sort of combine the varying depictions of Qunari for Sten. And then when I came to do Eamon and Isolde, I tried to make them less ‘Dumbledore and his child bride’ and more, according to Bioware, ‘couple in their forties,’  including giving Isolde a less generic hairdo. I left Teagan ‘Sexy Uncle’ Guerrin much as I found him and as a result Eamon accidentally turned out a bit too handsome. Oops.

[please do not remove artist notes] 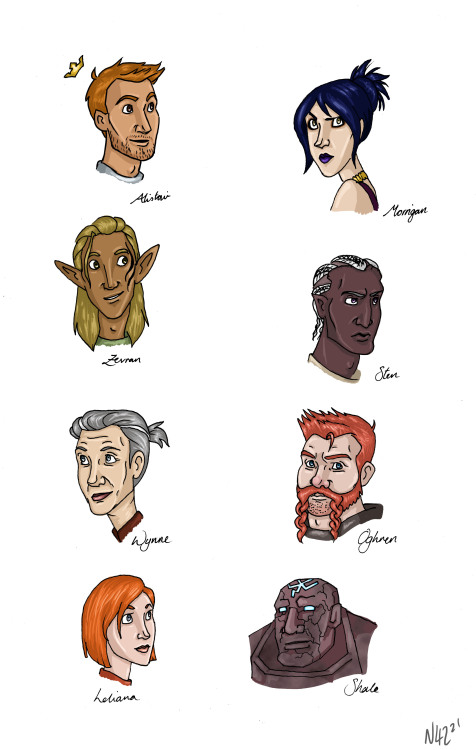 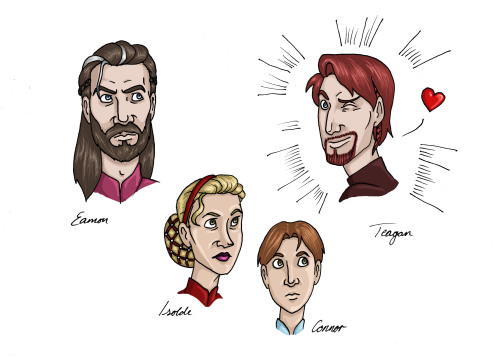 While most of the banns and arls of Ferelden cart their children with them to the Landsmeet in the interest of eventually marrying them off, Connor has spent his entire life at Redcliffe.

…And it’s hardly surprising: the child possessed the gift of magic. By law, he should have been taken to the Circle of Magi at the first sign, abdicating his claim to Redcliffe. Instead, the boy was kept out of public view and his magic hushed up… with disastrous results.

All mages are beacons that attract the attention of Fade spirits. Because of this, they are trained and tested by the Circle to ensure that they can withstand attacks from malevolent Fade creatures that seek entry into the waking world. Untrained Connor drew the attention of a powerful demon that tore the Veil asunder 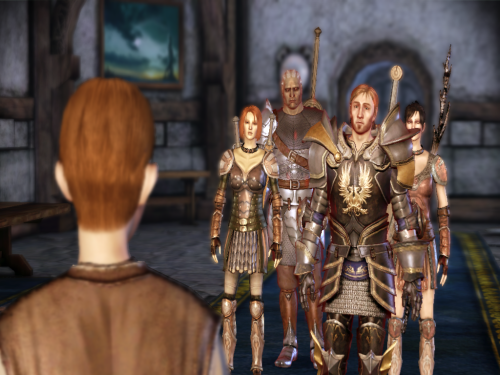 Everytime I find Connor in Redcliffe and listen to him be full of self-hatred, I get so sad. Then I get salty because the devs didn’t put him -at the very least in an uninteractable manner- in Skyhold! Where is my boy!!!!!

“Evette!” Connor shouted, grabbing her arm. “Snap out of it!”

Evette couldn’t move for a moment, watching the Circle fall to pieces right before her eyes. Mages and Templars both were dying, and the roar of battle echoed off the stone, turning it into a deafening cacophony. Everything she’d worked for, everything she’d tried to change, was crashing down around her.

Connor’s voice finally broke through her thoughts, jerking her back into the moment. “Connor, the children,” she gasped.

“I know,” he said, dragging her through the hallways. “Do you know a way off the island?”

She thought back to the mysterious note she’d received some weeks back. Remember when Karl and I got away? You remember the way, Frosty? It’s waiting for you.

Evette looks out over the lake, her heart light. Below her office balcony she can hear children at play on the green, shouting and laughter that was never allowed when the tower had been known as Kinloch Hold.

Now it was the Ferelden School of Magic, created and supported by the King of Ferelden and utterly ignored by the Chantry.

Connor was furious when Evette came out of solitary confinement. As soon as he’d heard she was back he came storming into her chambers, not bothering to knock. “What in the Maker’s name was that about?” he demanded.

Evette had been coming out of her bathing room, a dressing gown wrapped around her. She looked thin and tired, as if she hadn’t slept the whole two weeks she’d been gone. “Pup,” she sighed, waving him to a chair at the small table set with soup and a pot of tea. “You made a mistake, one that many have made before you. You shouldn’t be punished for being my apprentice.”

Me, seeing Isolde - who bullied a literal child Alistair, made he be mistreated and sent away from his home to a place he hated - have a mage kid who, in the best case scenario, is teared away from home to be locked up in the Circle:

“I’m not very good at Tevene yet, aside from the academic terms used in magic of course,” Connor said cheerfully. “But you know, the first phrase I learned before arriving in Minrathous was dog lord.”

The two altus men across from him froze, one’s eyes flickering between Connor and Dorian, like Dorian would save him. Dorian just smiled back with all the fake sweetness he could muster. He could see Mae smirking out of the corner of his eye. The men could be great members of their party, but not if they couldn’t handle some good old-fashioned Fereldan honesty.

“I did not come here just to watch my husband embarrass all of you, though I do enjoy looking at him quite a bit. If you’re quite finished, I would like to return to business before he drops you out the window.” 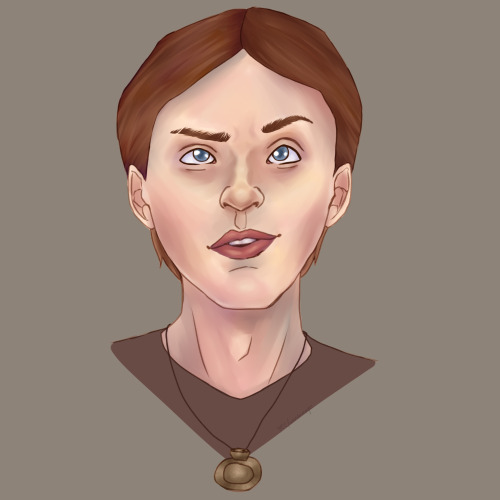 normally, in the dark future, connor immolates himself the moment you open the door to the room he’s in.  but if you use flycam to check on the room connor’s in before you open to door, you can see that he’s on the ground, rocking back and forth.

#daedit#daiedit#dragon age#dragon age inquisition#connor guerrin#its weird that they dont use his actual model for it tho#da#dai#myda#mydai#myedit#myedits#mygifs#mygif#suicide ment /
124 notes
connorguerrin
Video
#dragon age#dragon age mods#connor guerrin#myedit#connors modding adventures#ignore the double listings after that one line of dialogue i just didn't clean up the tree properly lmao#i made that change towards the start when i was still learning so it looks. how you say. Terrible(TM)
2 notes
dalishious
Answer

i'm curious about your thoughts on connor's appearance in dai if he lives in your worldstate. i havent played dao so i dont kno if the things he says make sense for his character, but it's annoying that they use him as yet another mage against the rebellion

Honestly, I would be more surprised if Connor wasn’t traumatized by what happened at Redcliffe. In DA:O after he’s freed from the demon, Teagan comments that he doesn’t remember anything, so we don’t see him respond in any outwards way–they probably didn’t want to tell him. But that’s definitely not something you can just keep from him… Especially with him then being sent to the Circle, where he would have been under intense scrutiny from the templars, even more so than the average mage. It’s amazing they let him take his Harrowing, really.

Like, Connor probably spent the rest of his life after Redcliffe being called a dangerous monster. It’s no wonder that’s what he thinks of himself.

So I was reading Connor’s wiki and found this

[He was named after his grandfather’s lover, a man whom his father, Eamon, came to known as father.]

“There are things we must do, things that must be done, to survive. Queen Moira did them and so shall her son.”

Rendorn Guerrin is the Arl of Redcliffe during the Orlesian occupation of Ferelden. He is one of the leading figures of the Fereldan Rebellion which rose up against King Meghren and the Orlesian rule.

He has three children: Rowan, Eamon and Teagan, is married to Arlessa Marina, and has a lover named Connor.[1][2]]

[A coronation for the Rebel Queen was held at Redcliffe.[4] Rendorn, along with his lover Connor,[1][2], then went forth from Redcliffe to join the rebellion, and the Arl became one of the queen’s generals. After Moira was slain by traitors, Arl Rendorn took command of the rebellion. He was killed during the disastrous battle at West Hill, along with most of the rebel army, including Connor, at 8:99 Blessed.

Trivia
Rendorn is erroneously referred to as Connor in the codex entry for Fort Connor in Dragon Age: Inquisition. Instead of fixing the issue, Patrick Weekes decided to write a lover named Connor into Rendorn and Marina’s relationship.]

Why no one told me about this?? This is gold! Btw, here are sources from wiki 1 and 2 (sadly without links, because tumblr hides this post other way)

Fort Connor was constructed by a young Arl Eamon after the Orlesians were driven from Ferelden. It was named in honor of Eamon’s father, who died at the battle of West Hill—and after whom the arl named his son.

Eamon was determined for Redcliffe to stand as shining example of Fereldan strength. He constructed Fort Connor to watch the King’s Highway and protect the Hinterlands against all enemies. It proved its fortitude against darkspawn during the Fifth Blight, suffering damage only when the darkspawn deployed emissaries. Eamon said proudly at the time that Fort Connor was “unbreakable by anything short of magic, and for that, thank the Maker we have templars.”

edit: I added transcripts, because screenshots are little blurry

I will be forever salty about the Teagan/Connor stuff being cut from Dragon Age 2. That Connor cameo was far better than that horrible one we got in Inquisition. And Teagan was a bonus!! 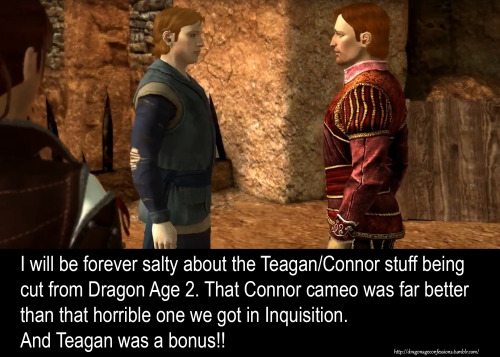 The option to save Connor by going to the Circle is weird. On the one hand, it’s odd that this cruel and heavy choice can be circumvented by just going there, and the only thing stopping us is if the Circle is Annulled (which most players won’t do). Then again, maybe it’s actually clever that we can reject such a choice and say “or we can go for help to people who are qualified to fix this sort of mess”. A (probably unintentional) subversion of the usual “grim and gritty” choice.

some recent art i’ve done of elissa in my sketchbook* + journal! the second half of these are a couple months old, but i’ve never posted them. reference for the 2nd one is brie larson

the 3rd and 4th sets are from the youtuber AU

*the little drawing of belle at the bottom right of the last pic isn’t mine; my sketchbook is from disney so every other page has a lil belle, and the others have lil birds

Transcript 2: “Hey guys, welcome back to my channel! Today, we’re going to talk about structural inequality with a few special guests: My nephews Alistair and Connor, and my best friend Alet! (picture of Alistair labeled “fraternity big, bane of my existance who I love”, Connor labeled “cutest boy on earth”, Alet labeled “love of my life (besides my husband)”] 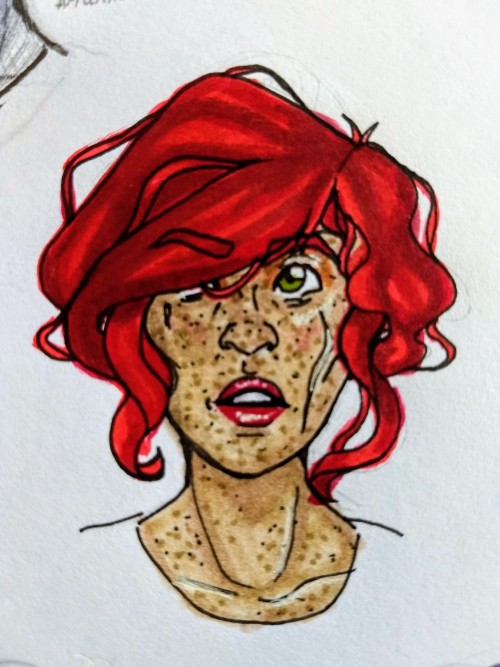 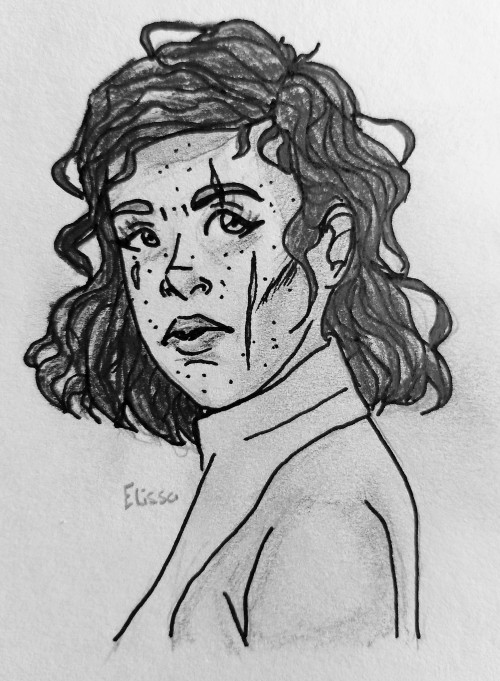 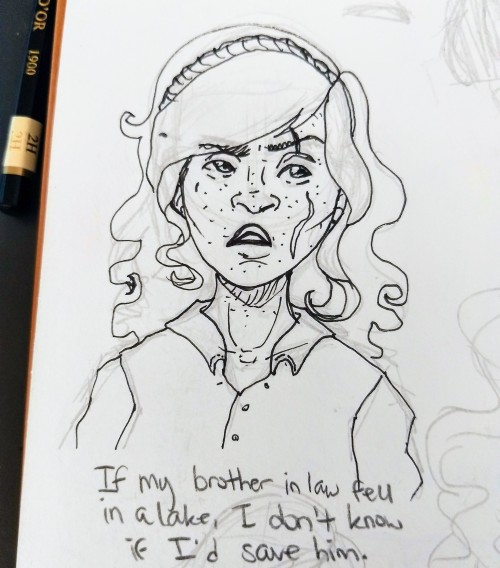 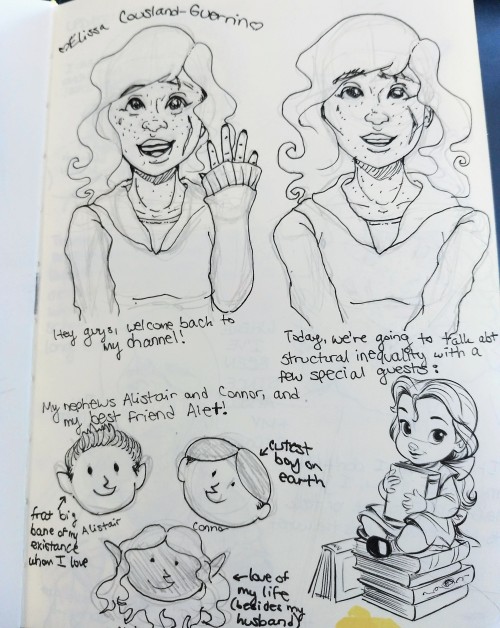 What doesn’t make sense to me at all is that Anders says the Tevinters are the only ones to have researched the reversal of spirit possession. Hawke says they’ve never heard of someone being un-possessed.

What about Connor? Didn’t Connor get possessed? We can confront and kill the desire demon in the Fade to free him. Did the devs forget about that?

Why is Anders a special case of possession? Why can’t we kill Justice/Vengeance in the Fade to free Anders? If for some reason, you fight him during Feynriel’s Fade quest, he wakes up fine as everyone else does.

(I haven’t read every codex or every word related to the franchise, so I’m not sure if these discrepancies have been clarified. For some reason, Anders and Justice are “one”. Is Wynne the same? Idk)

Oh my gosh, I just found Connor in Redcliffe. :o this is my first custom world state import so I’ve never had him show up before. Poor man, he’s so riddled with guilt :(