i’ll rip your eyes out

but only if you look at another girl <33

Today doesnt last forever. It’s one day. Enjoy it if you can, but if not, realize that today will end. You just have to get through today once. 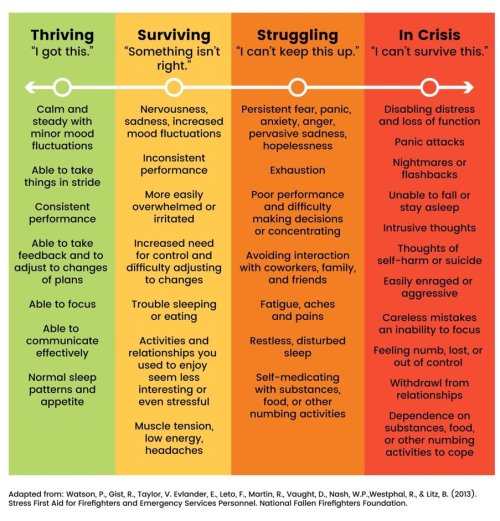 I want to drink on the roof, and fall like the stars.

I miss your soft scent, and the sound of the cars as they passed on the street and we hid from the rain.

What I wouldn’t give to be dying again.

Dying to see you, dying to drink, dying to skip class and not overthink.

But here I am instead.

Pals how do you cope with intrusive thoughts? I tried the advise I got in therapy many times and they just don’t work and the advise I googled is just too simplistic. I get this random memories from like years and years and years ago and they pop up in my mind all of the sudden and stay there for hours. They don’t say “you are a fool”, “you are useless”, “you are inferior”, “you are ridiculous” but it’s what they make me feel and the context is like I’d be reading about anything and these memories come until I stop and keep going for hours and I can’t read after for days because I’m scared it’ll happen again. Idk how to cope with it.

Today I realized I forgot most of the things I swore I’d never forget about you.

reading dostoyevsky and getting drunk by myself is my coping mechanism!

What am I thankful for on a day brought to be through American brain washing and colonization?

My Baba is mad at me and I’m in a scary new place with scary people.

I’m cuddling on the floor in a fancy new house with my paci on the verge of tears, listening to one of my favorite French songs about suicide.

And I just wanna dissapear.

So this is a post for all the littles who don’t have safe spaces for “Thanksgiving” and all those other holidays.

For those of us who don’t choose to regress but adapted to cope.

One day we are gonna be ok. Just breathe and hold on tight little one.

Very Unhealthy Coping Mechanism of the Day: scared of something? Put on some absolutely terrifying music and listen for it as long as you can! When you have to stop, the thing you were afraid of will seem pathethically small and the least scary thing in the room, especially next to your own mind still under the influence of the scary thing!

another Very Unhealthy Coping Mechanism: heartbroken? Feeling all the bad emotion? Put on something devastatingly depressing! Let it strip you from all the emotion you have and make you numb with sadness, then put on something happy! Let it get rid of the sadness from the previous piece, what merged together with your real life sadness!

Uh, granted, these can work, and help. Living and feeling your emotions is healthy, and good, and finding outlets is good too. But at this point, I’m mostly not living my emotions, but creating new, bad ones, and that is not good. I need to stop and that is self care too. So I will stop and Eat Something in the name of Healthy Coping.

#vent, #coping, #rant, #sadness, #fear, #anxiety, #depression, #personal, #i guess i am trying to get better, #but it is hard
1 notes · See All
cringecorelmfaoText

Idk who needs to hear this but it’s okay to eat. It’s okay to over eat. You deserve to appreciate food and enjoy it guilt free. You don’t need to skip meals to earn thanksgiving dinner. You don’t need to punish yourself tomorrow either. You need food and it’s okay to love it. You’re beautiful and perfect and wonderful as you are. I know it’s hard but use today as a moment to appreciate all that your body does for you. We owe a lot to our bodies and eating what you want to guilt free is a perfect way to say thank you.

Hmmmm so, I’m no expert on these things, you’d be better off actually asking someone who’s got professional training on this, but I can share with you my experience and what worked for me when I was in a similar situation.

When I was institutionalised in a mental facility out of my own volition I ended up having a roommate that suffered of panic syndrome. And she would have these recurrent attacks many times and just be extremely frustrated because she didn’t know how to manage them.

She also wouldn’t be very receptive of physical contact - I imagine because it feels even more suffocating than it already is with all the difficulty of breathing and whatnot - which to me was not really a problem since I don’t like hugging or these things to begin with. However there were other forms of aid I was able to employ to make her feel calmer and comforted.

I would never leave her side while she was having an attack, even if she told me to, because even tho she hated having them in front of people I knew it wasn’t best for her to be alone in times like this. And I was right to do so, after we got out she thanked me for never leaving. So it’s good to remember that while we should never out-right ignore one’s wishes, sometimes when people are in a vulnerable or panicked state their better judment may be compromised. Being a good friend is not just agreeing with and going along with everything your friend says or tells you to do, sometimes you have to do the opposite even if they get agry at you because you know it’s worse for them the other way around.

The ritual I would do is:

1 - If she was laying down on her back or stomach I would support her body to sit up right. It wasn’t so much a hug as it was just making sure her breathing didn’t get even more difficult due to the gravity acting on your lungs while being laying down.

2 - I would often just stroke her hair while I talked to her to make sure that she understood that I was not locking her in place, just holding her so she could breath and offering her comfort in other ways (she was okay with being touched like that, other people may not be, it’s very circumstantial).

4 - I would do that 2 or so times in a roll and then ask her to close her eyes and try to visualize what I’m describing to her in her mind. I would often use a balloon. I would tell her “you see a balloon in front of you, a red ballon, it has hearts on it, and it goes up and down, up and down, up and down…” Emphasizing on the movement of the balloon, always being very calm and even in my voice tone.

5 - I would alternate between the counting and the balloon. Everytime I went back to the balloon I would change something about it, its colour would change gradually, hearts would turn to starts, it would come closer or further away from her, become bigger or smaller, it would go left to right instead of up and down or would twirl around in the wind, etc. And I kept doing that til her breathing became more even, she would stop crying and heaving her breath so heavily. I think it’s cause it helped her focus on something else other than the panick, if you’re trying to thinking of how the balloon changes, you’re thinking less of panicking.

6- once she was on a more manageable state I would make sure she didn’t hurt herself anywhere from her spasms before I got there, cause sometimes that’d happen, and if she did I’d take care of it or request that the nurses did it. I would bring her some warm water and a cloth or tissue to clean her face a bit, would ask if she’d like to take a shower, eat, etc. Would bring her water and then tell her to go rest for as long as she needed and if she needed me back she just had to scream for me that’d I’d be at the cafeteria which was right beside our room.

This is what I did, and for her it seemed to help heaps. Everyone is different ofc, but I think these things could help you and your friend some. It won’t cure anything, ofc, but it will help manage the symptoms and outbursts so she can later seek help while having more coping mechanisms available to her.

Again, I’m no expert and this is just my experience with a single person with panic syndrome. If anyone else reading this suffers of something similar or has someone in their lives that suffers from similar conditions and you think there are other methods that may be helpful please don’t refrain on adding to this post. I hope I was of aid, friend. Good luck to you and your friend.

just saw a post that said “trying to regulate before tomorrow” and i thought holy SHIT you can mentally prepare for things BEFORE you do them! damn! like girl i–

If your anxiety levels are high, you’re not alone, here are a few ways I try and cope, just a few of many. 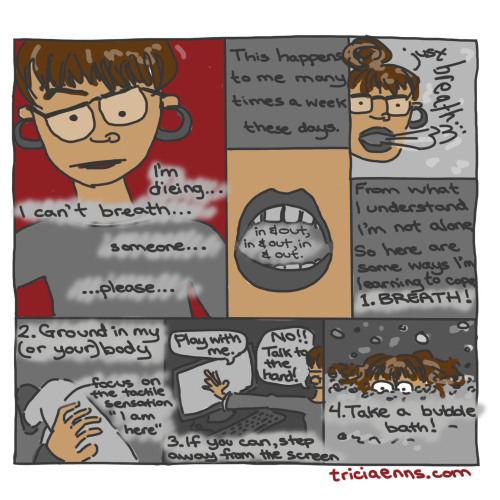 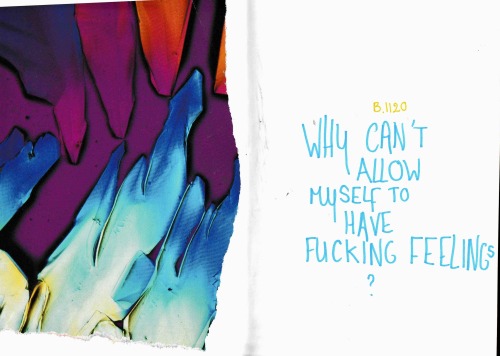 i have a condition called PTSD and what i have come to realize is that a lot of people tell you “don’t focus on the past.” even my therapist has said this to me. don’t get me wrong i love her as a therapist but she really shouldn’t have said that. people have told me “to get over it” or “you’ll be ok”

like no, I’m sorry I’m not “focused “ on my past i simply have flashbacks and i can not control them. yes I’m sure that self care techniques and grounding as well as other coping mechanisms will help me, or so thats what my therapist says. i iwsh it would help me but it doesn’t and i dont know that im in the past until im in the past and she wants me to try and stop a flashback before it even happens…. that really isnt possible for me. like thank you but i cant really do that…

and its hard whenever you know that you do have knowledge about what is wrong with you but that wont really help much in the long run because yes these things we are speaking of rn may help lessen the symptoms, but i personally along with others, i am sure.. think that its not going to ever go away completely. i just might not always be bad im hoping…

i may have BAD days and i may have GREAT days but that doesnt mean im “cured” thanks to some coping skills. just saying if thats working for you guys then great thats good to hear honestly. this is just my blog post and vent or rant about it \_/ dont come at me pls. thank you for reading my posts if you made it this far. 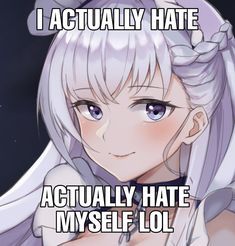