they’re really cute and i think they’re an interesting pair of unlikely friends/partners! corvus is also gorgeous and opeli is a badass. plus this scene made me go 👀

i also ship corvus with gren!

#corpeli, #i did get a request for a corpeli meta so hopefully soon, #thanks for asking, #anonymous, #shipping, #i also shipped opeli and corvus with amaya in s1 a lil, #but those both went out the window once janai showed up, #Anonymous
51 notes · See All
kravchikfreakChat
opeli, texting: i’m gonna send you a dick pic
corvus: a WHAT
opeli: [sends a picture of viren giving a speech at the meeting]
#modern!au i guess, #the dragon prince, #opeli, #corvus, #corpeli, #incorrect quotes, #incorrect the dragon prince quotes, #source: unknown
44 notes · See All
raayllumPhoto 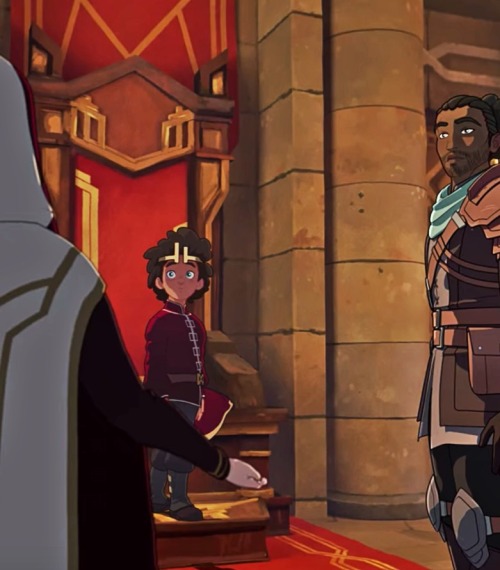 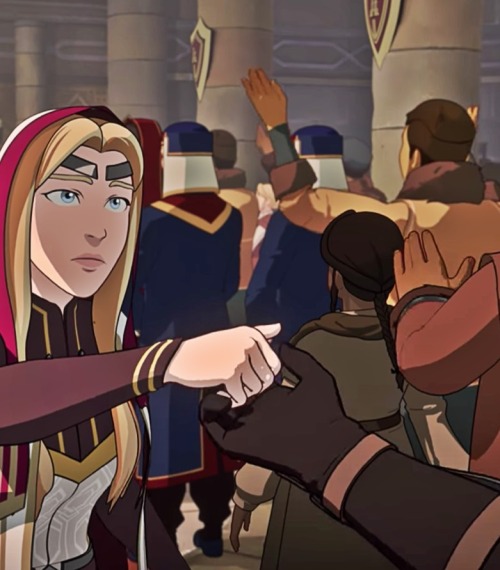 So Ezran has new parents and an uncle

Whenever Corvus sees Opeli after a meeting, and she’s particularly salty, he says, “Sir Corvus is at your service,” and she laughs every time a laugh only he and Ezran ever get to see.

Corvus gives Opeli a Necklace with an opal pendant to remind her of him when he’s on a mission.

After the first encounter with Kasef, along with the news about the Pentarchy, Corvus searches for Opeli to apologize for misjudging her and to thank her for genuinely having Ezrans best interests at heart. When he finds her (because he’s a tracker), she’s hiding in a corner, Sobbing. She cries for the deaths in the Pentarchy and sobs at the memory of Harrow’s death. When Opeli feels a second presence, she looks up swiftly at Corvus, about to explain herself, until she sees the same pain in her eyes reflected in his. He sits next to her, and she lets him. She starts to cry again and then grape on to his shirt and cries into it. Corvus respond by gathering her in his arms, splayed across his lap with her hand clutching his shirt to anchor herself. They don’t speak. They don’t need to. They both know why they’re in pain, and soon Corvus starts to cry too. Their cries turn to laughs as they start to talk about their memories of Harrow and then shift to childhood stories of Ezran.

“I remember when I first saw him sneaking out with Bait to steal Jelly tarts from the baker. He always offered me one as a bribe to keep his secret. He was 4.”

“He’s a good kid. He made plenty of animal friends on our way back here.”

“I noticed.” Opeli laughs. “It’s not hard to spot a large panther walking through the gates with the king on its back.”

Corvus smiles at the memory of the shocked looks on the face of the council. “You should’ve seen your face. You were so shocked and awed. It’s amazing how quick your face changed from surprise to relief.”

“Don’t judge me. It’s not everyday a large panther comes strutting inside the palace!” She sighs. “You know… I am relieved Ezrans back. I was so worried something happened to him. But… I’m also worried about him now. He a child and he’s responsible for an entire kingdom- not to say he isn’t capable. If anyone can run a kingdom, it’s him!- but… he deserves to be a kid.” She looks out to the window with the light shining through, “I wish he didn’t have to grow up so fast because the situation demands it. I find myself asking if this is what Harrow would’ve wanted for him…”

Corvus takes her hand in affirmation with a slight smile. “Hey… Don’t beat yourself up. I’ll admit I was worried about his rise to the throne. As you said, he’s just a kid. But, having gotten to know him in the short time I have, I’ve seen a kind and compassionate leader with a pure soul. I was afraid he would be surrounded by people who would want to change that about him. But… Seeing you with him- I’ll admit I was skeptical at first- but then I watched how to treat him. You don’t talk down to him like the others do and the way you look at him with pride and hope, it lets me know I can rest easy, knowing he’s in capable hands who will do her best to keep him the same person he is as you’ve described him. And as for what Harrow would want, the fact that you think that way means you are keeping his legacy alive and stepping into the role of his mentor and being what he needs.”

Opeli looks into his eyes with wonder and smiles “Thank you… I- I needed to hear that.”

This moment precedes the talk Opeli has with Ezran in the royal Courtyard by the fountain.

This little corner becomes their spot. They come here to escape their troubles and be their raw selves, anger and all. On specifically bad days, Corvus holds her in his arms as she clings to him. His embrace gives her a comfort she’s never known

Whenever she receives a letter about soldier casualties, she leaves the throne room. Asking to be excused, and cries in a corner praying that Corvus isn’t one of them

Opeli is known for her neutral and traditional values. She’s the voice of reason and moral clarity. Her devotion to justice can make her particularly passionate. However, if anyone were ever to mistreat Ezran, her reactions towards Kasef would be considered a mere slap on the wrist compared to what she would do if you were to make him shed a tear.

Corvus radiates super domestic dad energy. While he looks rough and tough on the outside, he’s a goofball who makes Dad jokes, plays games, and makes silly faces when he with Ezran.

Corvus cooks because Opeli, for the life of her can’t understand how to work an oven, no matter home many times, Corvus explains it.

The three of them go on family outings to destress from the hectic palace life and have fun in the forests of Katolis playing hide and seek. Hide and seek is always deemed as unfair because Corvus is a tracker, but Opeli is the only one who’s ever been successful in evading Corvus, and he loves it.

Opeli and Corvus are the parents who go to a parent-teacher conference meeting and say “that sounds like a you problem” to anyone who criticizes Ezrans empathic tendencies towards animals.

Corvus and Opeli don’t get angry with Ezran. They’re the epitome of “we’re not mad. We’re just disappointed” parenting.

Whenever Corvus is scheduled to return home from a mission, she waits impatiently at the castle gates with Ezran on her lap. When Corvus enters the gates, Opeli and Ezran run to give him hugs. Opeli gets there first and leaps into his arms. Corvus returns the embrace and spins her around in the air. Once Ezran and Bait catch up, Corvus and Opeli let each other go so they can give Ezran one gigantic group hug with Bait in the on his forehead.

Opeli always gives Corvus a trinket of some kind before his missions, so he “remembers he has someone to come home to.” She tells him to return it to her when he comes back to know that she was with him in his thoughts and heart while he was away. He answers it every time. And when he’s away, he always says “for my family” to remind himself why he’s fighting

Ezran does the same as Opeli, always giving him a piece of his clothing to “keep his scent in case he needs to track him down from kidnappers.” Ezran laughs at this joke. Opeli and Corvus are left terrified at the possibility, and as Corvus is about to tell Opeli to keep an extra eye on him, she tells him, “don’t worry, I got it.” already knowing what he was gonna say.

Ezran has a picture of the three of them (and bait) in his room next to his bed.

Max was Maryse’s whole world as a child, and when he left the Clave for a mundane woman, it absolutely destroyed his little sister to part with him. It is a hurt that Maryse carries with her into her adult life, and has caused her to suffer from separation anxiety. 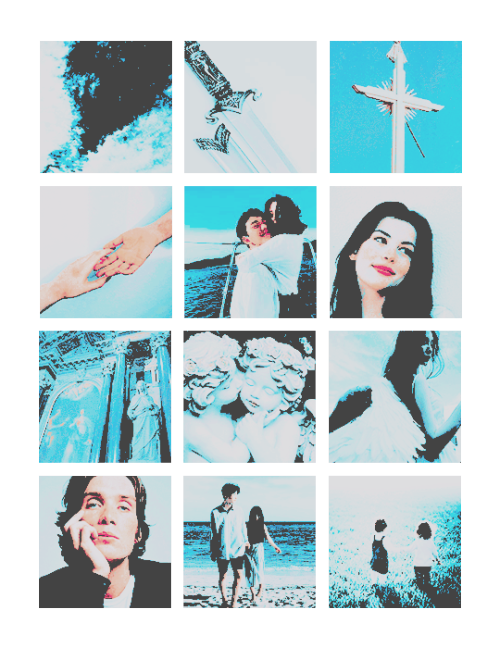 Memorial Day has an entirely new meaning to me this year.

Just over two weeks ago my siblings and I suddenly lost our Dad. I’m still trying to process, I’ve kept myself off line for the last couple of weeks in order to do so. (His passing was non-Covid 19 related).

I’m working on trying to find some type of ‘Okay’ while moving forward. With the pandemic occurring its been hard to find a routine or rhythm to follow.

All I can really say is that I am lucky to have such a wonderful Dad. I love and miss you.

In one universe, Scarecrow developed his Fear Toxin by combining the DNA of Ridley (the purple space pirate dragon) and remains of a Yellow Lantern Ring that had been ground up into a fine powder. No one knows how he managed to do it and no one has the courage to ask him. 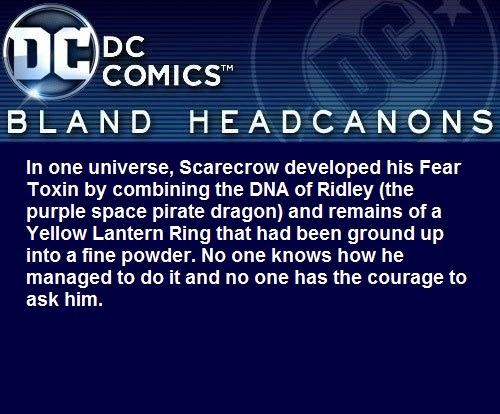 1. Maryse going on a mission with some shadowhunters and being hit by a spell that de-ages her, and she’s 16/17 again with no memory other than the ones she had at that age. She’s the only survivor of the mission and has no idea where she is, so she either has to find her way to the Institute or someone finds her, and if it’s one of the kiddos they don’t really know who she is, but once they take her back to the Institute they learn that that’s mum. [ dramatic music ] but all Maryse can think/ask about is her Alec who is two/three and where is he?

2. Maryse and one of the downworlders ( simon, magnus, maia ) on a mission and at first everything is fine, but shit goes down and Maryse goes full mum mode on them, even tho they are all physically stronger than her. Maryse protecting them and being worried about them and showing them that she truly did change.

Maryse and Alexander are not just similar physically, but in personality too. A lot of little traits you see in Alec are definitely mirrored in Maryse, from the way they seem too serious and almost uncomfortable in most situations to how they are very unwelcoming to strangers and people they perceive as threats to their family. She too has no qualms with showing her dislike for people, with sarcastic and dry remarks towards them, her brave and straightforward facade hiding her more insecure, caring and compassionate self. It isn’t surprising that Alec inherited most of Maryse’s personality traits, given that he spend most of his early life with just her around him. And so their similarities are quite striking to those who get to see it. Especially when they get to see it in Maryse. On how when put on the spot she stutters and struggles to get her words out, how she’ll shy away from attention when her accomplishments are brought up, how compliments make her blush and her eyes go impossibly wide. It is such an amusing sight that Isabelle made it her mission to get both Alec and Maryse to act embarrassed whenever she could, especially when they were together.

A Sentinel assigned to the Tomb of the Unknown Soldier, 4th Battalion, 3d U.S. Infantry Regiment (The Old Guard), continues guard after four flags were placed on crypts, at Tomb of the Unknown Soldier, in Arlington National Cemetery, Virginia, during Flags-In, on May 21, 2020. Flags-In is an annual military operation carried out by The Old Guard that honors America’s fallen heroes. 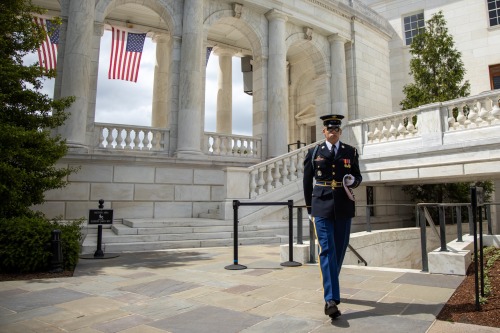 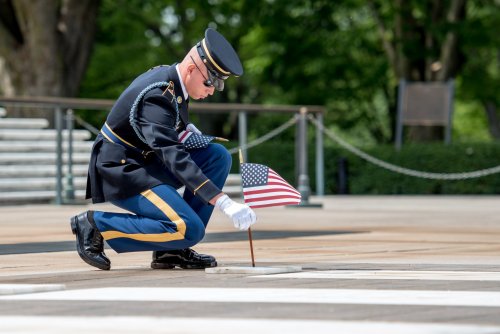 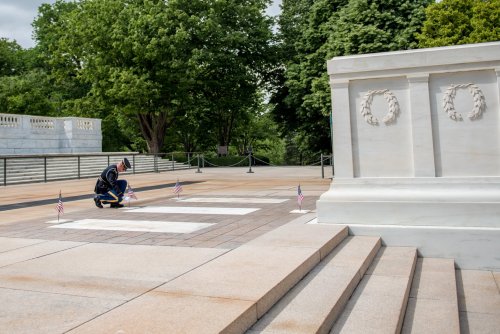 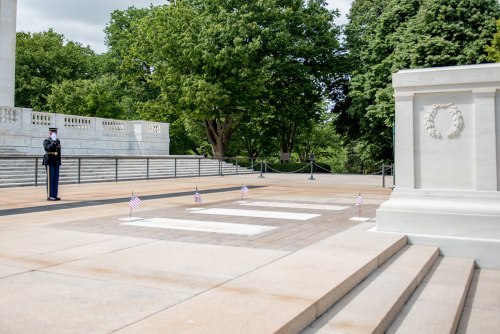 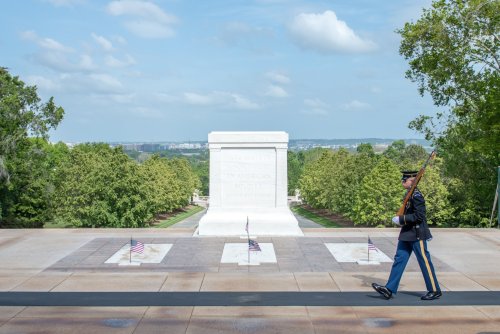 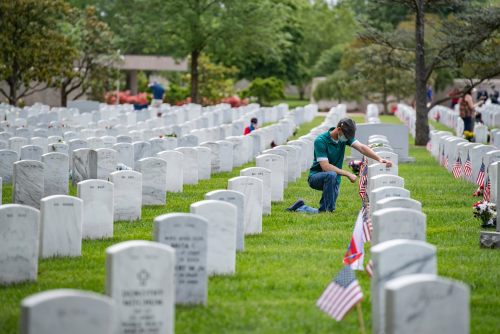 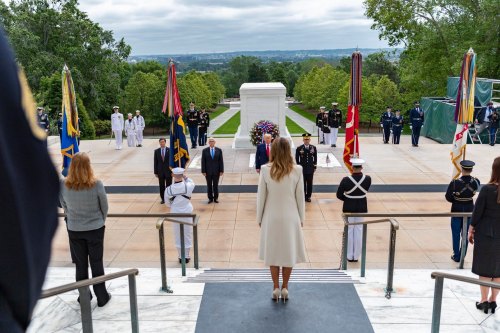 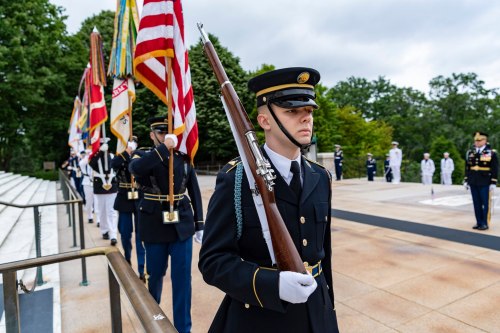 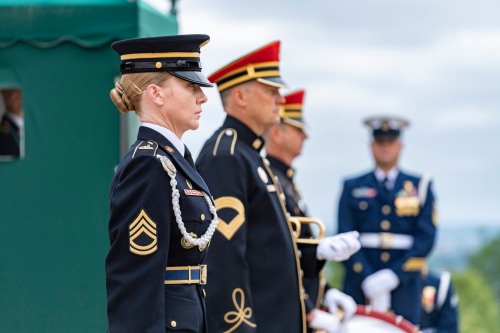 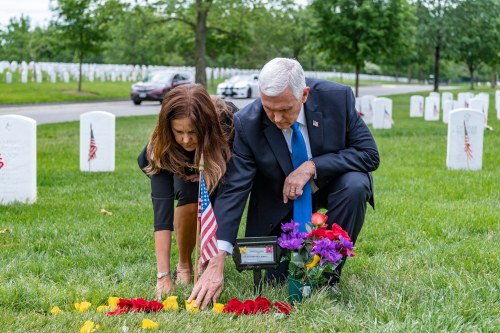 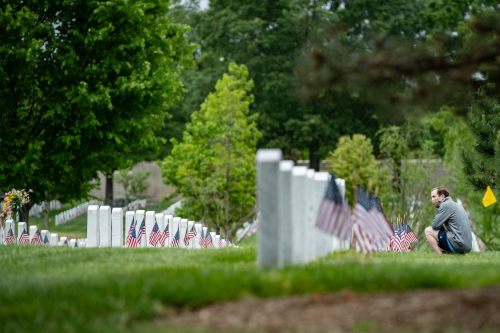 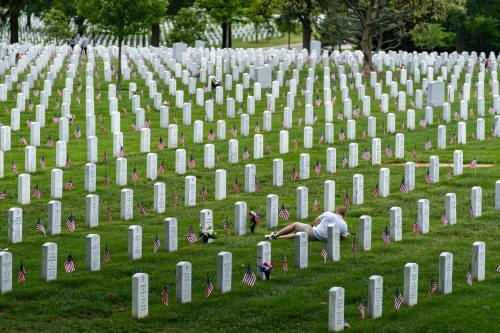 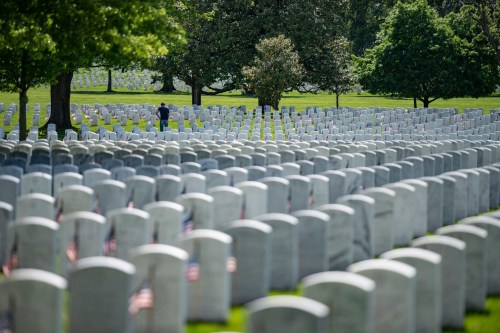 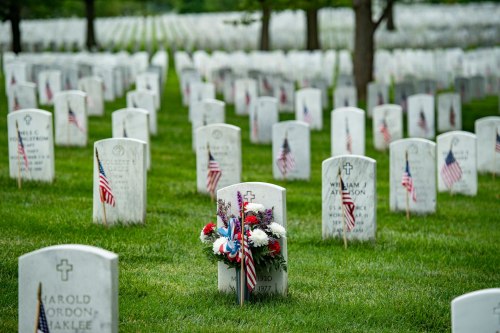