I was missing halloween so I created a really specific playlist filled with songs I recognize from standing in lines waiting to enter haunted houses. I’m ready for spooky season.

Have you ever accidentally just walked in on a piano that’s playing itself. 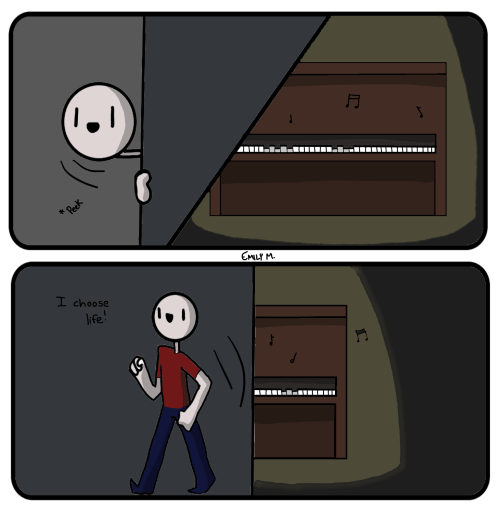 (GlitterAlbright) So this is my first semi-completed song! Mostly messing around. It’s about a girl who’s in love with the ghost that’s possessing her. Music and lyrics written by me.

Creepy Music for the Spookiest week of all…

Water distorts sound. That’s something you figure out quickly when you live on a lake. It can be annoying, especially when your neighbors blast their music at top volume late into the night. You’re unsure of how many times you’ve made noise complaints. You just know it’s a lot.

Recently the sounds have changed. A new noise unlike what they’ve turned on top volume. One that only occurs at 3am. That sounds suspiciously like… like Happy Birthday, and Joy to the World, and Do Your Ears Hang Low, and Pop Goes the Weasel, and Music Box Dancer. As though. As though there is an ice cream truck sitting across the lake.

Still you don’t think too much of it besides the fact that the 3am noises are waking you up.

And the cops are sick of going out for noises they report are gone by the time they reach your neighbors.

But you still hear it. Even as they call you to follow up that they’ve spoken with you neighbors and there is no music. Everything changes one day when the police knock on YOUR door with a noise complaint.

“We know that your neighbors across the lake are annoying with their music keeping you up at night but fighting fire with fire is not the way to resolve this problem.”

You shake your head in confusion struggling to understand because you were sound asleep when the knock comes.

“What are you talking about?”

“The music sir. You need to turn down the music.”

You stare for a while then invite the officers inside.

As they’re leaving a sound starts to drift lightly into hearing. The joyful yet distorted sound of Pop Goes the Weasel.  The cops frown and assure you they’ll address your neighbors for lying and trying to get you into trouble.

A few minutes later the cops are back. They explain to you that although they understand how frustrating it is to be constantly woken, it wasn’t exactly cool for you to turn up your music after they left.

“I’ve been awake still sir.” You explain, “the music is keeping me awake” You lead them once more into the house where the eerie noise still echoes.

“I’m getting real sick of this.” One cop says.

“You all will need to figure this out between yourselves.” The other adds on. “We won’t be responding to calls from this house anymore.”

You protest that it’s not fair but they shake their heads in annoyance and leave.

The music is gone for the night.

The next morning there is an ice cream truck sitting outside of your house. It’s not playing music yet you get a peculiar vibe you don’t like coming off of it. You edge around it to get to your car. Everything remains silent.

When you get home from work that evening, the truck is sitting in the same exact spot, soft playing a tune. Frustrated, you walk up towards it, ready to have some harsh words with the driver. But as soon as you get within 4 feet of the truck it blares. Sinister music, distorted despite the proximity, and chilling twist on original tunes.

You jump in shock, nearly falling as you scramble away from the sudden burst of noise.

Once you’re several feet backwards the music shuts off with a click. The silence almost as deafening as the song had been.

Grumbling you decided to leave it alone but mutter some choice words as you leave.

That night you wake to the distorted sounds of ice cream truck music. Echoing into your house from across the lack. And from in front of your house. You sneak a glance out the window, struggling not to move the curtains, and see the ice cream truck sitting in your driveway. You leap backwards as the music turns up. As though the truck had seen you.

Confused and frantic you call 911.

“Is this a true emergency” a grumpy voice at the other end of the lines snarls “or is this another one of your ice cream truck calls?”

You pause, not willing to admit it’s another call about the music but concerned about the growing closeness of the truck sitting in your driveway.

“That’s what I thought.” The operator hangs up.

At 4pm the music turns off. The truck stays in your driveway.

You call out of work, citing a medical emergency.

Your neighbor calls you that night, snapping at you that if you don’t move your truck off their lawn they’ll press charges.

The truck now sits at your front door. Driveside door open. A dark figure stands on your porch. You can’t see its’ face but it appears to be holding an ice cream cone in each hand.

You run back to the room, slamming the door behind you, and burying your face in layers of blankets trying to block out the sound. It doesn’t work.

Instead of turning off at 4am today the songs continue to early in the morning growing more and more distorted as the night wears onwards. When the music finally stops, your impromptu earplugs doing little to drown it out, you creep down stairs.

You call your neighbor.

You try 911 again and the phone line goes dead.

You’re alone. In a big house with an empty truck sitting in your driveway, blocking your car from leaving.

You shut the door making sure to lock it. You return to your bed and hide under the blankets. You sleep poorly, followed by dreams of a man with a gaping mouth and swirled black and white eyes. He is always hungry. Music blares out of his cavernous mouth. He follows your in your sleep, slowly, steadily gaining ground. Never stopping. Never resting.

At 3am you wake in a cold sweat. Music surrounding you until you can hear and sense nothing else.

You open your eyes slowly. Dreading what you’re going to see. At first there is nothing but darkness. You begin to relax. But still that eerie music. Those poor imitations of songs. Echo in your head.

But in the dark. A figure stands besides your bed. Outlined by flashing lights from the truck outside. Music trickles in streams from a speaker that acts as his mouth, eyes nearly hypnotic in their ever moving pattern.

“Would you like to make a purchase?” The question is as distorted as the music has been.

You shake your head stammering out a soft “No thank you”

There is a truck that sits across the water.

If you listen careful it plays its’ merry tunes.

Songs twisted to the point of incomprehension.

You must be careful not to listen too closely. You never know if the ice cream man in monitoring you too.

To whomever is playing creepy music in the flat above us:

Please stop. I keep thinking I’m about to get murdered by a sentient doll.

#creepy music, #october, #halloween, #we dont live in a horror movie, #soundtrack to my life, #why???
4 notes · See All
angelblood2002Text

Fact: Zak got a promo box of goodies from Travel Channel for Ghost Adventures

Season’s Creepings, all you lovely listeners; this is your DJ of darkness over at the Symphony of Death. Once again, it’s the time of year to update the Masterpost!Now you won’t find the classic Halloween haunts here, since those scares can be had anywhere, but maybe you’ll find a new favorite. Pull out your cauldron, brew up something nice, and kick back with me!

It’s almost 12 in the morning and while I was going through a drive thru, my stereo turned on by itself to a random AM station with this eerie, grainy classical music playing.

My guess is I accidentally activated my radio through the buttons on the steering wheel without knowing but I can’t help but feel cursed this Sunday evening.

I just finished watching K-12 and I am literally so proud of Melanie it’s hard to explain. For those of you who don’t know, Melanie Martinez just released her film K-12, which she’s been teasing fans about for ages. I’m watching it again with friends on Saturday, but the soundtrack is so good I can’t. The song “Strawberry Shortcake” Is so so so good I started crying in the middle of watching it. But maybe that’s because I’m a super fan but anygay, go check it out. The dedication and work put into this work of art is just ♡(*´ω｀*)/♡ anyway, sorry, excuse me for being a weird fan lol. How was your day? ♡

My school has this really faint but ominous violin music playing on loop… every day… all the time. No one I’ve talked to has any idea where it’s coming from. I think I’m going to die here.

This song slaps. It’s my favorite kind of creepy.

#audio, #creepy music, #i really want do draw something with this but i don’t know yet, #but it really inspires me!
0 notes · See All
purplesixbeatsVideo