Chasmosaurus belli skeleton on display at the Royal Ontario Museum. 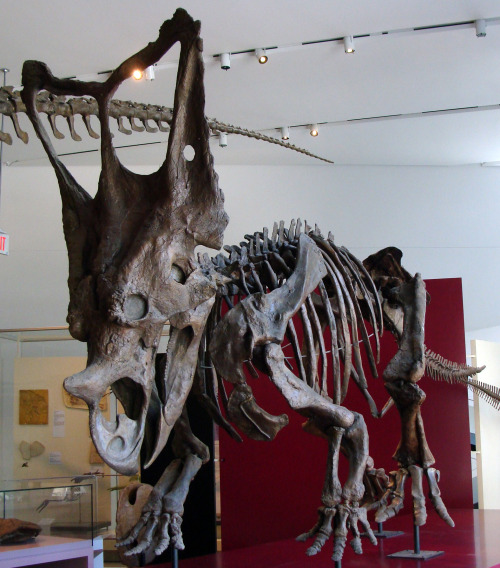 the gorgon lizard aka GORGOSAURUS ~  tyrannosaurid theropod that also lived in the late Cretaceous.

I’m going to be honest here I totaly forgot that I had this drawing to make today, been with my mon to the hospital and I just completly forgot about it, but here is us haha ~ 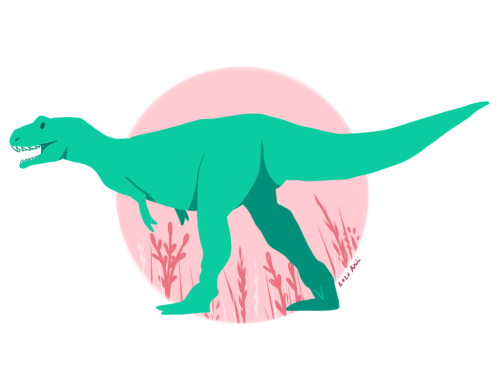 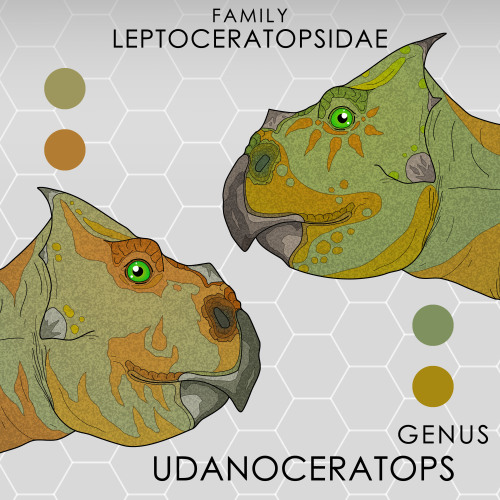 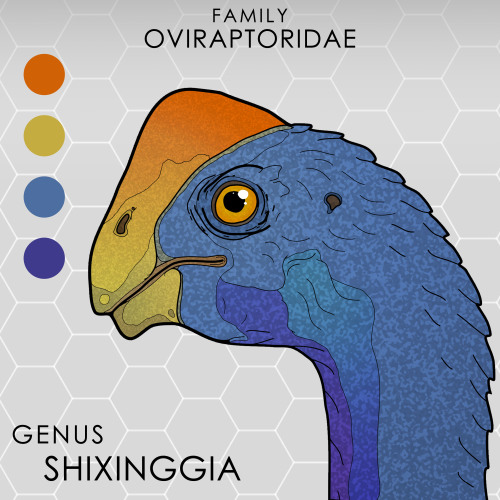 The skeletons of an adult and juvenile Edmontosaurus annectens on display at the Houston Museum of Natural Science. Veeeeerrry old drawing. Don’t even know what I used for it. Prismacolor looks like? Oh well, here’s a group of utahraptors or generic dromaeosaurids. I think they’re supposed to be in hell creek? Honestly I forgot so much about this pic. 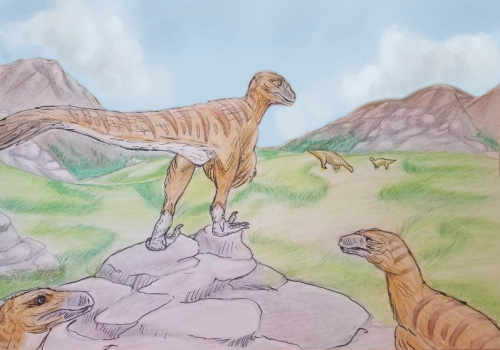 Velociraptor is probably one of the more famous dinosaurs right? Meaning fast hunter and it used to live in Mongolia during the late Cretaceous.
I just realized that majority of the dinos I’ve drawn this year is from the late Cretaceous…. I’ll have to include more jurassic and triassic animals next year! 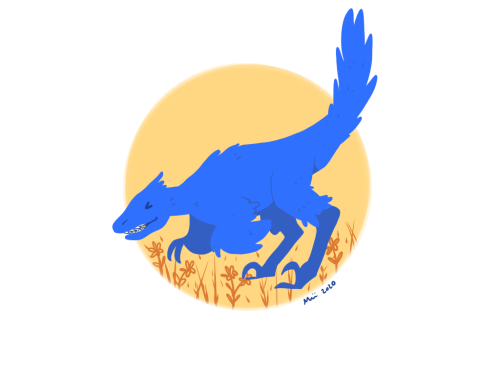 Dinovember Day 17: Argentinosaurus, one of the largest land animals to walk the earth. Wanted to do something a little special and stylised because this is one of my favorite titanosaurs! 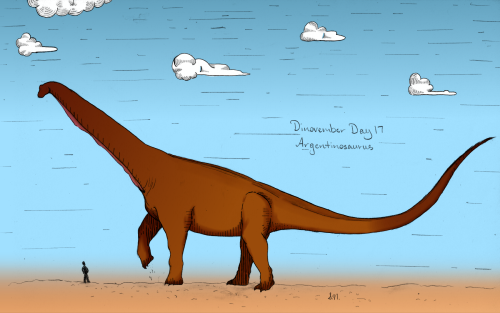 Thickheaded lizard, the Pachycephalosaurus that lived in the late Cretaceous. This is kinda a redraw of a watercolour painting I made 2 years ago. The reference itself is from a dinosaur book I had since I was seven. Hence the pose these two are in. Pachys could probably not headbutt eachother at all… probably one once.. 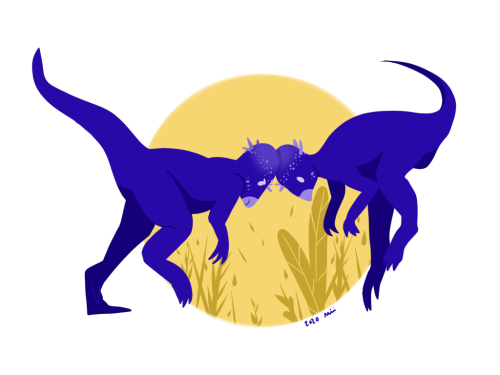 A thin layer of fog rolls off the surface of a freshwater lake surrounded by forest. The sun is just beginning to rise over a nearby mountain top, its light just now touching the tops of the trees, amidst which a small creature hunts for an early morning meal. Twenty feet ahead a small lizard rests on top of a downed tree, the small dinosaur locks in on it and approaches with caution, ready to pounce.

Suddenly the ground shakes, Sinosauropteryx freezes in place, waiting for the rumbling to stop. The lizard has not moved from its resting spot. Slowly the small theropod moves forward, but its prey remains motionless. Now only 10 feet away, the tiny hunter stops, curious as to why the its meal has not reacted to the rumbling. A long fuzzy tale, banded with brownish red stripes against creamy white counter shading, pokes out through the top of the foliage, followed shortly by a small inquisitive head.

Slowly moving forward, it tilts its fuzzy little head, trying to find an answer to the puzzle laid out before it; perhaps the lizard is still asleep, or maybe it has yet to warm sufficiently to be aware of its surroundings.  Sinosauropteryx cautiously hops up onto the tree, the claws on its feet gripping the bark to aid in balance. Moving closer to its mysteriously motionless food,  it pokes the lizard lightly with the tip of its snout, but there is no reaction.

After giving the lizard a good sniff, the dinosaur determines the lizard is dead. Not one to pass up a free meal, Sinosauropteryx  grabs the carcass with sharp little teeth and tosses it lightly into the air in an effort to turn it around slightly in order to make eating an easier task. Happily it arches it’s neck and swallows the lizard head first, learning all too late that this would be its last meal. The earth rumbles once more, and the surface of the lake is broken by large bubbles as gas escapes from deep below the ground. The light of the new day’s sun begins to grow dark as little hunter loses it’s bearings and teeters off the log, falling onto it’s side dead, a victim of the same volcanic vapors that had killed its prey. 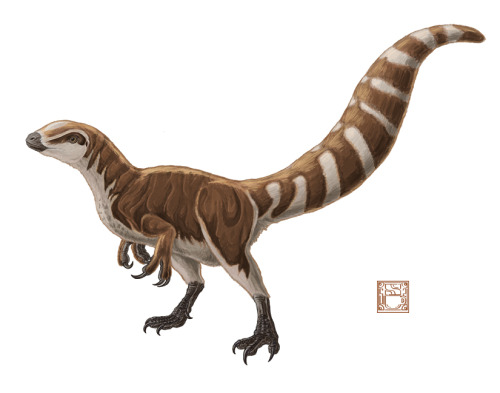 Bring on the power of floof! Some color work in progress on my rendition of Sinosauropteryx prima. I’m going to be doing some more detailed patterning in and around the more solid reddish brown tones and perhaps some light transitions from brown to yellow to white, just to add some extra details. I’m looking a bit at small birds like thrushes and waxwings for inspiration. 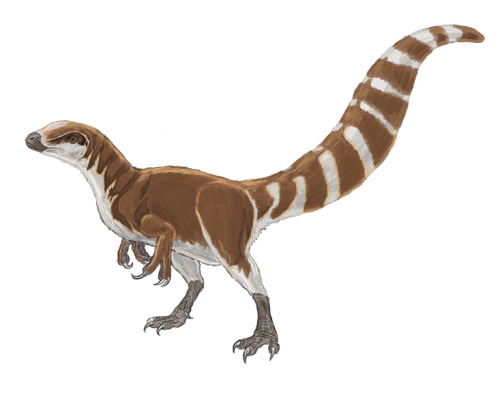 Work in progress underpainting for Sinosauropteryx prima, a small but important little theropod discovered by farmer and fossil hunter, Li Yumin in 1996 in the Liaoning province of Northeast China. Scientists dated it to the Early Cretaceous, between 124.6 to 122 million years ago.

S. prima was tiny, with the largest specimen measuring roughly 3.5 feet in length, with weight estimates coming in at around 1.2 pounds, well under the average weight of an adult modern domesticated chicken. 3 specimens have been described, all apparently dying and being quickly covered by volcanic ash, leaving their remains very intact and well preserved in most cases, though one might actually be an example of a related animal.

It’s level of preservation is one of the things that makes this little creature so important, as not only were its bones discovered mostly intact and articulated but there is a clear outline of a find covering of feathers around the whole of the holotype specimen. These feathers are thought to be primitive structures similar to the downy covering found on the chicks of many modern bird species.

What really made it stand out came many years after it’s discovery when it became the first ever dinosaur to have its in-life coloration described by scientists. Up until this point it was thought we would likely never know what color prehistoric creatures were. But thanks to ground-breaking work that uses powerful magnification to see the preserved melanosomes present in Sinosauropteryx’s feathers and comparing them to the structures in modern bird feathers scientists were able to identify the rough coloration and pattern found on the animal’s body.

As it turns out, the analysis revealed what looks to a mostly dark reddish brown coloration with countershading in lighter tones, a racoon-like mask pattern on the face and a banded pattern on the long tail. This would have helped them blend into a variety of different environments by breaking up their outline and making them harder to spot by both prey and predator alike.

This technique has since been applied to help determine the coloration and patterning of many other prehistoric specimens since, including many other dinosaur specimens from China. 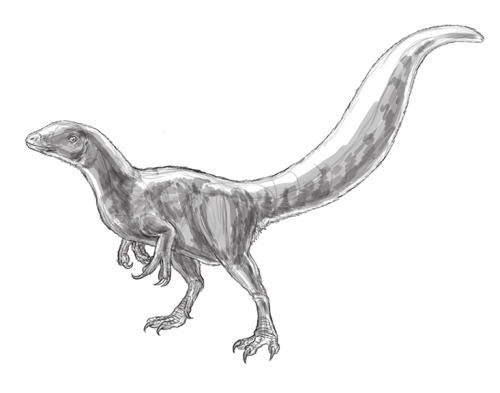 Ankylosaurus. Meaning fused lizard that lived in the United States during the late Cretaceous.
This is another dino that is very hard to draw me thinks. Also this purple/magenta plum colour is not my favourite, but you folow the colour chart for a reason ~ Also we’re almost halfway through this months challenges !! 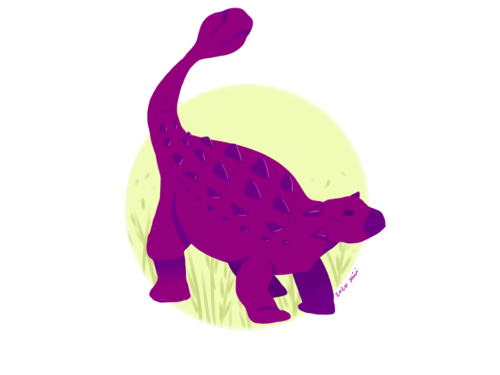 Dinovember Day 12: The Brazilian spinosaur Oxalaia, with colors inspired by the Aardwolf and Striped hyena! 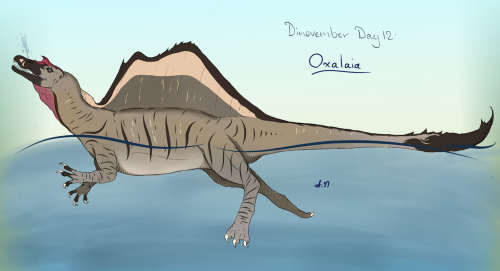 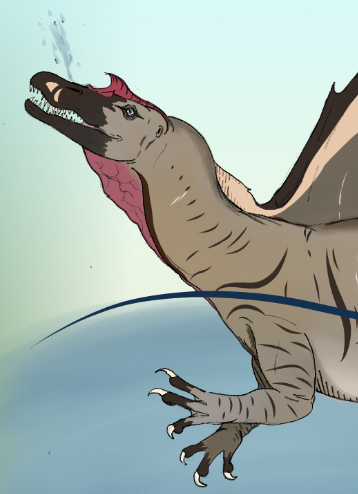 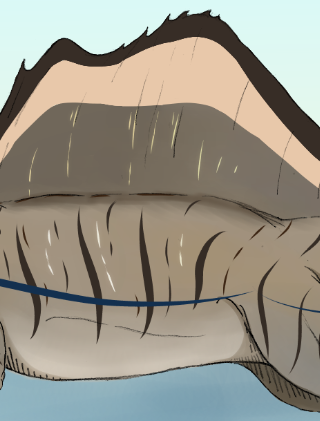 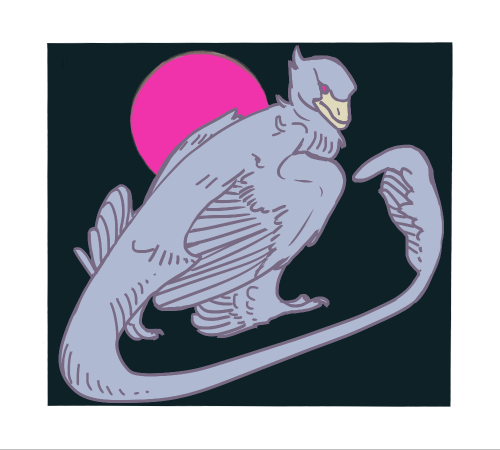 Oviraptor the ‘’egg stealer’’ that lived in Mongolia during the late Cretaceous. I watched a documentary not that long ago that Oviraptors might not be egg stealers but rather verry protective over thir eggs. You can watch it here 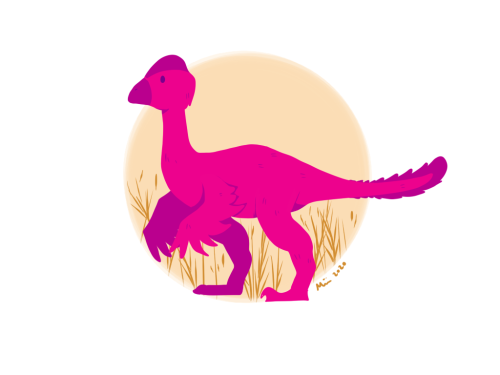