Ship self time with Chip baby-

#SMAL Rambles, #Cursing, #Swearing, #Cussing, #Text, #Mine, #SMAL, #This is about Chip from Awful Hospital btw.
0 notes · See All
tomsterText

#Fandom stuff, #Awful Hospital, #Very sorry if you see this in the main tags <3, #SMAL Rambles, #Cursing, #Swearing, #Cussing, #Text, #Mine, #SMAL, #You can catch me reblogging Chip fanartz-
0 notes · See All
tomsterText

Johnny’s character…. UGH.,.,.. IT FUCKING TRIGGERS ME WITH THE ABUSE AND SHIT..,,

Like, thanks for the reminder I live a shitty but better life even though I’m abused and now I feel bad for saying I am haha!!!

#there is no escape and I welcome that, #not art, #text post, #swearing, #cursing, #cussing, #delete later
9 notes · See All
tomsterText

Instead I create a scraggy

Actually, love to every artist who draws for HLVRAI, thank you for the yummy content y'all…

#Fandom stuff, #HLVRAI, #Thought this up lolz-, #Text, #Mine, #Cursing, #Swearing, #Cussing, #Messed up a bit-, #If you want tag people y'all lolzzz-, #SMAL Rambles
94 notes · See All
emphoenixcatText

The urge to slam my head against something is strong again. Anything to get this Bitch to stop fucking crying about every goddamn thing again.

#cussing, #something wrong with me, #tw self harm I guess, #everything is so stagnant, #I’m so fucking useless and purposeless, #everyday is the same, #it’s not that bad and idk why i’m even crying, #but at the same time idk why i’m even trying, #I can’t even say what I want without someone asking, #and half the time I don’t even know what I want, #I didn’t eat the other day because I couldn’t even say what I wanted, #idk, #just ignore this
10 notes · See All
jazzy-art-timePhoto

Rudy, in the distance “Flake’s one ounce of whoop ass” 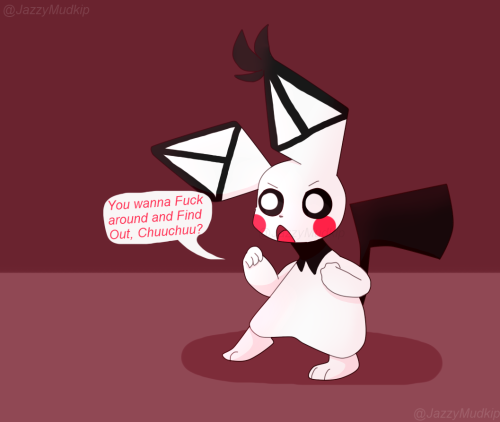 #gets used as a birdie in a game of badminton, #FlakePichu, #pichu, #pokemon, #sfw, #my art, #digital art, #my characters, #swearing, #cursing, #cussing
25 notes · See All
inkinterruptedText

I grew up in a conservative fundamentalist-Christian household. Cursing and swearing were absolutely forbidden. I distinctly remember the first time I cussed. I was 4 years old. I was in the playground of my kindergarten school. I saw two kids racing, and I uttered something along the lines of: “Damn! They are running fast!” (I didn’t say it in English). I don’t remember feeling bad about it. No regrets to this day, despite it being my naughty little secret. It didn’t become something recurrent. In fact, at the public school I attended, I was counted among the well-mannered kids.

The pragmatic nature of my mind,

When by a kitten it is played.

And yet some traces of sanity,

For I am still haunted by you,

And the things you do each day.

For fucking sake I do hope,

You’ll all just pass away.

Lmao😂😂 this was funny

Who ever played as hisoka lmao I enjoyed this very much😂

It wasn’t just the hate, you’re correct. I do get anon hate once every so often.

But the sheer. Amount that I received. Caught me off guard. The way the messages were worded as well sounded more like people from the community than some rando fan as well.

I’ve been having a big depressive episode lately anyways. So if anything, that was my snapping point.

Coming home and seeing almost each and every one of my accounts, spammed to hell. So I couldn’t log out and ignore it, it was on everything.

But that wasn’t it, I later calmed down a bit and looked once more and noticed everyone in the community making posts. Most about them not feeling safe interacting with anyone or joining anymore community events. Closing their blogs to interactions with anyone or just feeling generally not safe or happy there. People being really upset or worried not being able to interact with other blogs or groups forming and separating everyone. That is what tipped me over.

That I felt the need to mention something bad that happened to me and end up causing a shitton of mistrust and anger within the community. That is what tipped me over the edge. I haven’t been in the community that long but I haven’t seen SO MANY people say those kinds of things, all because of something shitty that happened to me that I shouldn’t have made public. Mrs.SpreadPositivityInPokeaskCommunity had to open her big mouth and make so many people feel uneasy or uncomfortable.

Yes the absolute barrage of horrible asks and messages to me on ALL of my accounts, that messed me up but seeing what happened afterwards is what pushed me over.

I see so many kind messages telling me that it isn’t my fault or I didn’t do anything wrong, but deep down I feel like it is and I don’t know if I’ll ever feel like it wasn’t my fault. I still don’t know where I stand within the community or if I should continue or not, for now I’m taking more or less a break. I’m too paranoid to open my computer anyways.

#I feel like if I come back I’ll waddle back in like booboo the fool, #I’m alright now tho. I’m healing. mostly healing physically because heehoo I did a oopsie but uh, #yeah, #not art, #text post, #long post, #swearing, #cursing, #cussing, #negative, #drama
7 notes · See All
dysphoriablues666Text

I don’t know what to do. I grew up in a Wiccan home. I’m 20 years old and I feel as though I learned nothing. There’s God’s and Goddesses I absolutely LOVE learning about and wish to claim to worship, but honestly I don’t feel a big connection, or maybe they’re not connected to me? How do I know when a God/Goddess connects with me? I feel so new to all of this and I just want help. Magic is frustrating and I don’t know where to start! I’m still learning about myself as a person and I’m so new to being a Witch it fucking hurts my very Soul. Please send help. Also, I really fucking hate “Witchy” books. They’re either full of shit, created by a non witch, or (all of the above included) are STRICTLY for women and always use she/her when referring to the reader/or a witch and is very “only women (born with vaginas) are/can be witches!” Basically very TERFy and just idfk just UGH! MEN AND NONBINARY AND TRANS WOMEN CAN BE WITCHES YOU FUCKING BITCH. I need a fucking drink I swear 🎃😧 (like some juice but I don’t have any)

Well fuck me I guess. I just looked up a thing forgot what it was called already but basically the thing said if you want to sleep at don’t look up blah blah blah, and guess what? I fucking looked it up. Now if it was a week day and not my day off aka the day I sleep the best I would of been fine. Just fine. I guess I won’t be granted that. It was my fault though, I get curious and like what could be so bad? The fuck, that’s just nope, I'mma get outta there. Anyways thanks for coming to my ted talk, where I rant about something I did to myself.

#i cuss in this post, #cussing, #cuss, #swearing, #bad words, #my fault though, #could've avoided that, #got. too curious, #ya know how the saying goes, #curiousity killed the cat, #I'm the fucking cat
0 notes · See All
asystemsblogText

I SWEAR IM GOING TO FUCKING KILL SOMEONE. I NEED TO SIT DOWN AND HAVE A LONG ASS TALK WITH OUR BROTHER ABOUT BOUNDARIES. HES A FUCKING GOOD KID BUT HE KEEPS TRIGGERING ME OUT. MAKING QUICK FAKE PUNCHES AT THE HOST WHICH ROCKETS ME OUT PISSED.

So I’m relistening to season 1 of the Penumbra and I never realized that Joshua cusses so much in Home! It took me by surprise since that’s the only episode they seem to drop an F Bomb. Still my favorite episode out of the season 1 one shots.

Basic: We are here to take ass and kick names!

Smeej: THE FUZZY ONE SPEAKS THE TRUTH

Basic: Smeej says that ghosts aren’t real (aside from ghost types) but im gonna prove him wrong! A ghost took my sandwich once!! Also he has never eaten candy before so I’m gonna get LOADED wit it!!

Smeej: WHY EAT THIS… CANNED DEE… WHEN WE HAVE PERFECTLY GOOD CUCURBITA HERE TO FEAST UPON?!

Basic: Because eating pumpkins is STINKY. But what are YOU doing here is MY question! Here for candy or spookies? 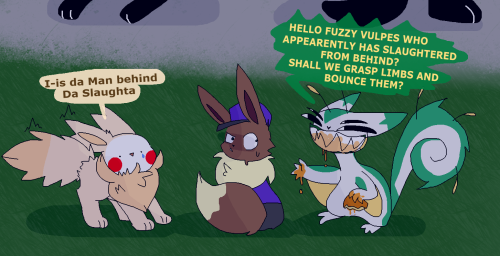