Certain things were vaguely hinted at re: Taeder’s backstory during the last session…which of course got me thinking about the full story on how he got his start as a Necromancer.
So here’s a glimpse at his first (failed) ritual, about a decade before the current storyline. 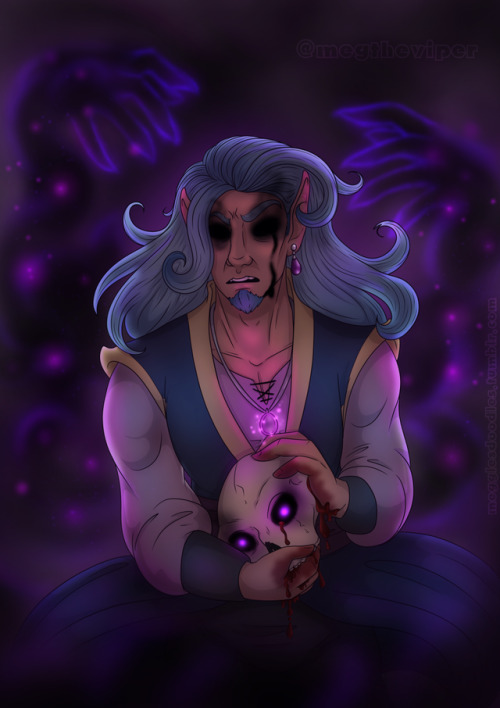 #d&d, #d&d character art, #dungeons & dragons, #d&d necromancer, #d&d cleric, #/ my ocs, #/ taeder the necromancer, #...Taeder definitely misses his long hair. *lol*, #the skull belongs to his dead girlfriend. he tried to resurrect her and failed, #due to necromancy being performed on people being a generally unaccepted thing, #he was ostracized for even attempting it, #not to mention also kicked out of mage school, #whose hands are those? rakthalion's perhaps?? or maybe...somebody more sinister? it's a mystery~
20 notes · See All
spookymodePhoto

My nercomancer character, I’m playing him instead of playing my wizard girl…. Though I’m probably gonna change his name cause Kerreth is hard to say :c 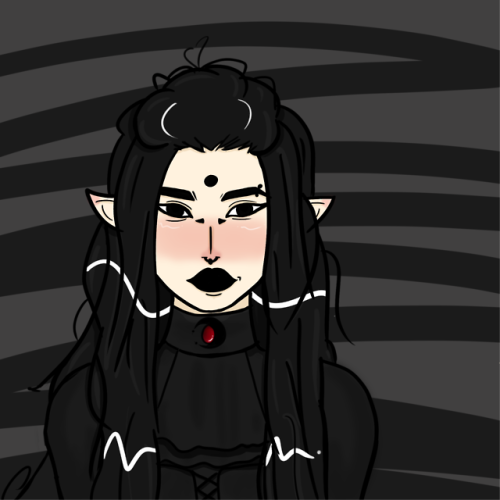 my friend is playing d&d, they’re a necromancer.

A quick sketch of one of my D&D characters in their “out of control” form.
I like necromancers ouo 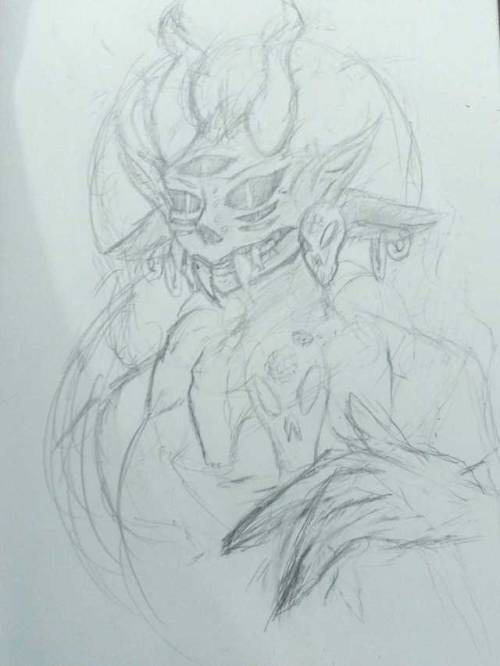 Colored a sketch of my lovely partner @aydenburd ‘s amazing tiefling necromancer.
So bummed this campaign’s on hiatus! I miss her!! 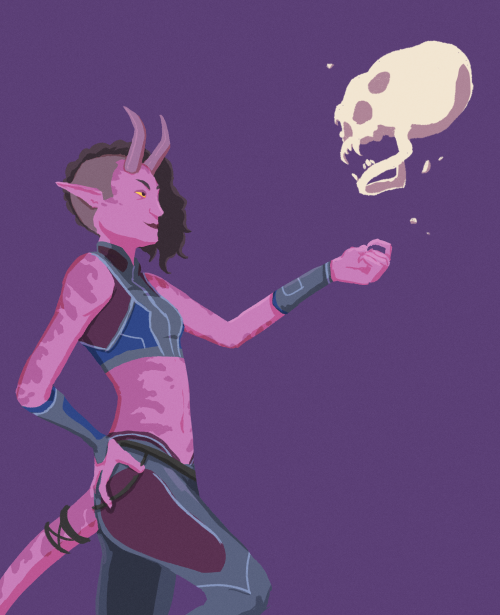 “He’s teleporting don’t you see it!?”

#wwe *being pelted by tomatoes*: the undertaker is NOT a necromancer, #aew *smocking a fat blunt*: we've got a d&d themed dude. we've got aliens. We've got wizards, #KSLAJDNLKASDLKM MATT HARDY IS POSSESSED BY A 3000 YEAR OLD SPIRIT CALLED DAMASCUS
0 notes · See All
antiquariansText

♪ I’m in the mood~
For dancing ♪ 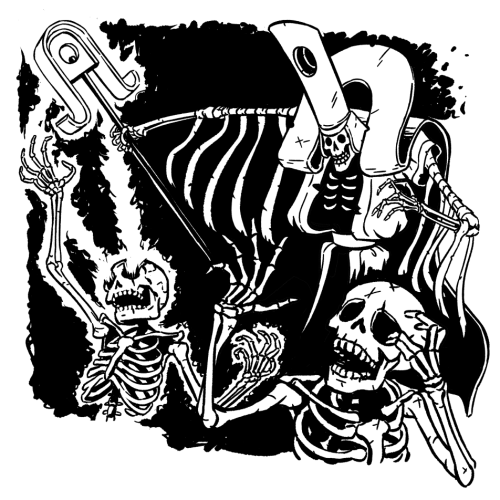 Hey wow it’s been a minute! Quick update! I’ve been pitched head first into Dungeons and Dragons thanks to @coollizzylou and her previous special interest and yeeted into Guildwars 2 because it’s her current special interest. And let’s be honest we are so similar in what we like so it was only a matter of time before she got me hooked

#my little sister is autistic, #she also has good taste, #i play a wood elf drow monk in d&d, #and a norn necromancer in gw2, #d&d, #gw2, #hello im new here
0 notes · See All
dbawsolPhoto

pencil skirt stays ON during s 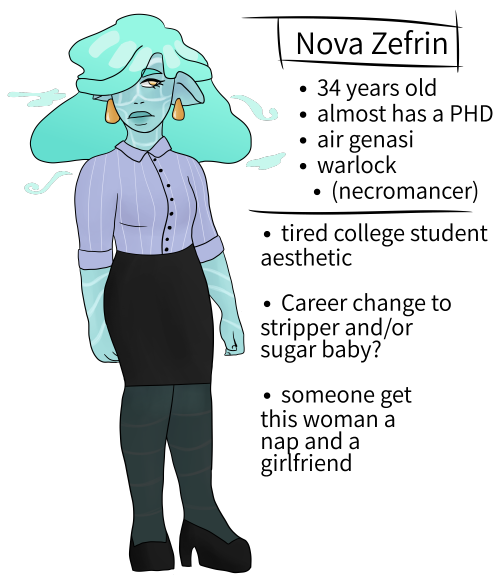 #she/her prns, #forgot ot say that but oh well, #anyways shes college student tm, #almost at that phd so close only one more year god DAMN, #air genasi, #dnd, #d&d, #warlock, #necromancer, #also she became a necormancer by accident when she was a teenager and just rolled with it, #air genasi warlock, #dungeons and dragons, #my art, #artists on tumblr, #art, #digital art
1 notes · See All
pancakeswithmaplesyrupText

Some pics of the character I played in my latest campaign (which hasn’t met up in almost a year ;-;)

He’s the human wizard I posted ages ago, except I was able to change his race to tiefling (he still has the human buffs to keep it fair)

Leave it to the rogue to skin someone’s corpse

#dungeons and dragons, #Dungeon of Disasters, #d&d campaign, #d&d, #d&d rogue, #i mean it was a necromancer he skinned but still
13 notes · See All
lmattsonartPhoto

D&D shenanigans! The group I DM finished up a campaign where an enemy became an ally, they killed said ally’s father, and freed the souls of an entire town. 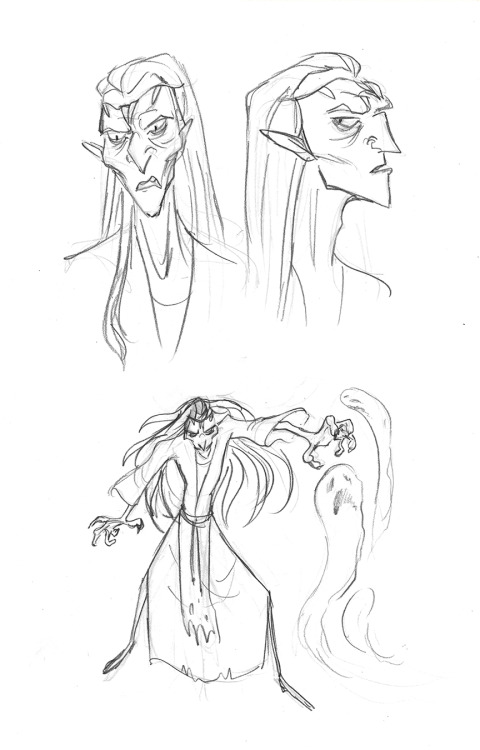 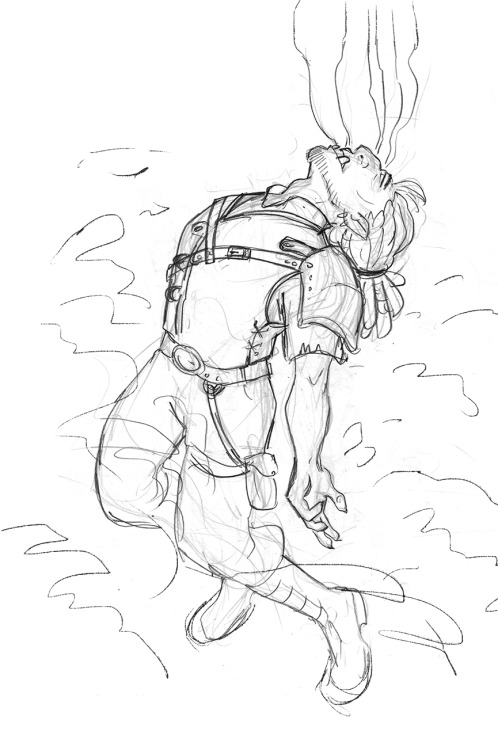 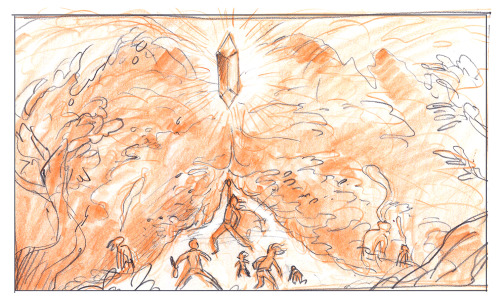 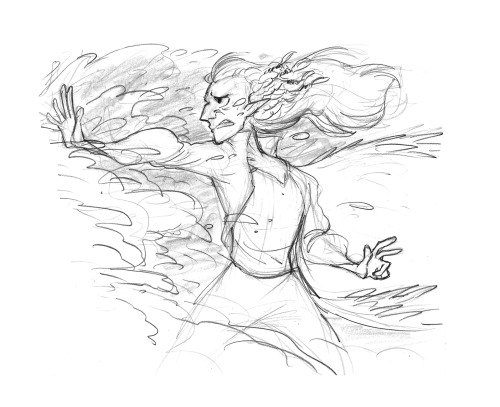 Me: okay. Do you want it to be pirate, horror or cutesy themed? Or some unholy trinity?

#d&d one shot, #the things I do for my friends, #unholy trinity, #it's tomorrow, #I have not prepared, #the cutesy comes in from the ship names, #Spectral Spoon, #Ghastly Gull, #the crew are pirates, #they sunk a necromancers ship, #they want revenge, #the rest of the crew was eaten
0 notes · See All
gobs-o-diceText

Harlow & co. made it to Level 4 tonight, huzzah!

So, his wizarding gets that much better because stat bump, and I decided that I should probably take an actual damage spell in case he needs to kick in something beyond just control [Animate Dead comes soon, but not quite yet. Next level, as it so happens] - In case there’s things out there that aren’t so easily manipulated and we just need to put them down faster.

[Phantasmal Force has done some great things for the party - Completely shut down a drake last time and pinged it for a fair amount of damage. It’s nest-mate made its save quicker, but still, it bought our tank a couple of damage-free rounds. But it’s definitely not a damage spell. And Blindness/Deafness is useful control, but Con saves are common, and there’s no direct damage from it].

Scorching Ray seemed to be the most straightforward damage option for Level 2 spells, and best pound-for-pound, as it were. But, honestly, it just didn’t/doesn’t feel right for his character, y’know? He is attempting to become a necro-botanist (possibly the world’s first and only).

Fire is anathema to both plants and the undead, so an uninspired blast of fire just feels wrong for him. Like it’d be icky on all levels for him to use - It doesn’t reflect his creativity and it too easily destroys the materials that are most important to his goals. It’s just so gauche. It’s for those who can’t think of any more clever solutions to their problems than “uh… I dunno, throw fire at it?”

So, instead, I’m going with Shatter. It’s a little more unwieldy, but feels less like it’d be objectionable to him to use. And the damage type is less-likely to be resisted. So, there’s that, at least.

Plus it’d be effective against those heartless tin-can golems and constructs and the like. Come get y’all some home-grown, farm-fresh organic bog-zombies and swamp-skeletons! They’ll work all the harder, and they just have that honest, pure touch of nature that no slapdash hunk-of-junk can compare with!

[His other pickups at level 4? Minor Illusion (I toyed with picking up Message as my new cantrip, but MI is just so versatile) and Suggestion. So, how ‘bout y’all come on down and get y’selves a friendly new helper?]

Other things that happened to Harlow this session:

- Had some rocks dropped on him by a trap

- Due to a critical fumble, ended up taking an arrow to the chest courtesy of the party’s ranger. Who he was standing well behind. Like, in the opposite direction of the enemies. Which did allow for two very relevant Disney sidekick (paraphrased) quotes:
“I’ve been impaled”
“Well, beats me. According to all known laws of physics, that should just plain be impossible.”

He’s had himself a day, basically.

#Harlow Ficus, #the actual D&D campaign I'm in and not the world of Mirando Prorsus/Compita I'm making, #but the characterization is consistent for Harlow regardless of setting, #an eerily cheerful bumpkin necromancer is so much fun to play as y'all. You have no idea, #It's D&D!
3 notes · See All
kimchicuddlesPhoto

I interrupt your regularly scheduled program to bring you these “necromancer bromance” moments :P
TikvaWolf.com

[Image Description: images of a necromancer wizard having a bromance with his skeleton buddy, with the caption “necrobromance” at top. Different panels show the two sharing ice cream, going to the movies and laughing while eating popcorn, cooking a questionable looking dinner, playing videogames, and sharing a hug.] 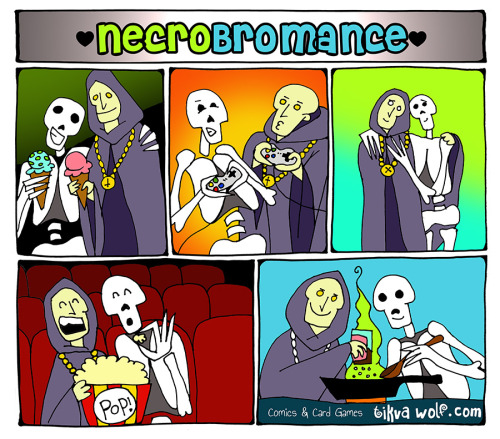 me goggling what a cleric is: is there like a dead people equivalent to this