i’m kinda confused by the wording of this ask but what i got from it is dan is handsome and beautiful and i agree very much with that.

“The thing that you’ve done, which I think is so incredible is that you’ve introduced audiences to this character who just so happens to be who he is,” Beatriz said about Levy’s “Schitt’s Creek” character. “That is the way to create change, social change, empathy in people. It’s so incredible.”

Dan Levy can create positive change for the LGBTQ community through Schitt’s Creek.  Black showrunners can do the same for their communities, if we seek out and watch their shows.  But we have to watch the shows, so that the networks (and advertisers) know that we will watch them.   Find shows written, produced, acted, directed and designed by black people and watch them.

Schitt’s Creek paddled off into the sunset after six seasons, but not before it cemented its pop culture status late in its run with four 2019 Emmy nominations. Levy, who co-created the show with dad Eugene, earned legions of admirers in fans and critics alike for crafting a same-sex love story in a series that was free of homophobia.

I FIRST FELT REPRESENTED WHEN I SAW “My So-Called Life. Watching Rickie Vasquez, a gay character played by an openly gay actor, Wilson Cruz, certainly felt like the most honest and respectful portrayal of a gay teen I had ever seen.”

THE TOP OF MY QUARANTINE BINGE LIST “Feel Good. My good friend Ally Pankiw directed it. And my fellow Canadian Mae Martin wrote and stars in it. Lesbian female director directing a lesbian hero in a story is the perfect remedy to a down day in quarantine.”

oh that podcast!! yeah, i mean, he kept them so they’re his rings hahah i love that he wanted that piece of david which was such a part of him.

For Dan Levy, ‘Schitt’s Creek’ was a ‘master class in character comedy’ 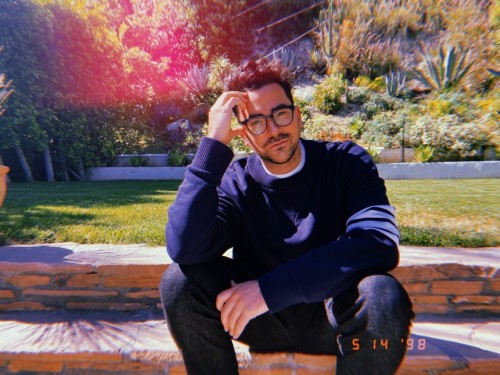 #dan levy, #is a gem of a human being, #schitts creek, #schitt's creek, #david rose, #cutest, #you little shit, #and your adorable quarantine hair
204 notes · See All
bellafarellaAnswer

Where? When? I need more info please!!

This and the Christmas one are my favourite extras. Dan almost breaks three times ❤❤❤

“You been going to the gym ‘cause that looked effortless”

I think it’s overlooked that David met Patrick *because* David was moving forward with his life, starting the store and making a life for himself.  He didn’t wait for a partner, he was living his life and *that* brought him to Patrick.

Live the life you want, and it might just bring the right person into your life. 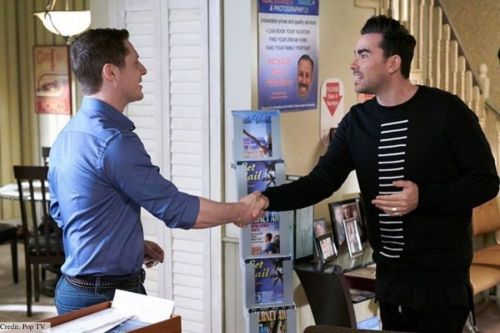 i would die for her

the parallel between the last line stevie sings in the cabaret being “maybe this time i’ll win” and “because i want those people to know i’m not a joke. and that i’ve won” “david, look at this place. you’ve won.” absolutely kills me

#it celebrates people coming from a place where they felt lost in their life, #who have now found family and happiness and not feeling shame in embracing it, #guh, #i love them so much, #schitt's creek, #schitts creek, #stevie budd, #david rose, #david x stevie, #dan levy, #daniel levy, #emily hampshire, #they both won, #feel free to steal this, #i want gifsets stat
89 notes · See All
prettydoddleoddleText

“We changed lives with Meet the Parents. I don’t need an award for it. That is the award.” - Dan Levy 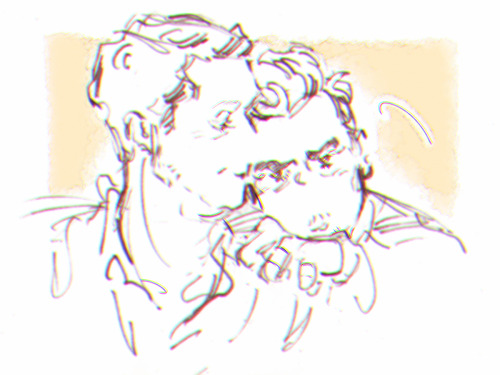 Well, this says it better than I can. 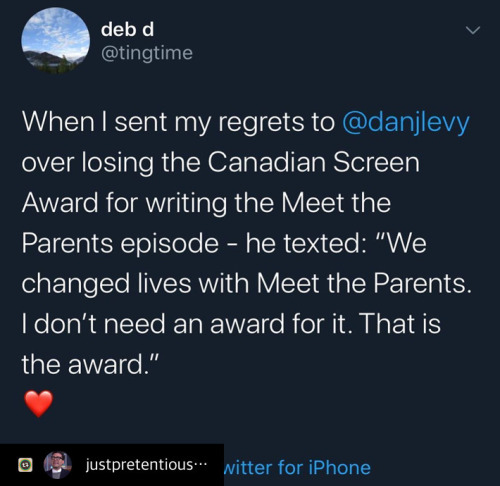