Summary: Gloria Rhee narrowly escapes Atlanta with her brother as the outbreak reaches the city. Luckily, they find a camp outside the city and together, they fend through encounters with the living and undead.

Starts a little before Season 1 and then follows the main storyline of the show.

A/N: And we’re back with another chapter! Please let me know what you guys think of this!

Gloria stands by Beth’s bed, checking over the girl and sees that she isn’t responding even though her eyes are open. She takes the small flashlight from the night table and shines it in the girl’s eyes, but there is still no response.

She sighs, “just like Glenn said, she’s in shock and I’m afraid it is psychological.”

“W-what do we do?” Maggie says, concern and worry written all over her face.

“Keep her fed, keep her hydrated, and don’t leave her alone. You or someone from your family should keep her company, keep talking to her even if she doesn’t respond. Since it’s stemming from her psyche, the best thing is to try and pull her out of her shock, she needs her family.” Gloria instructs.

“I’m worried about her fever. Is there anything we can do about that?” Maggie goes to sit on the chair on the other side of the bed, placing her hand on Beth’s forehead.

“We can’t give her medicine, we don’t know how her body is going to react to that when it’s in this state. Put a wet towel on her head, try to lower her temperature that way. I’ve seen this before, while I was interning at the hospital, and if her body reacts badly to the medication… we could lose her.” Gloria purses her lips together.

“Lydia would have taken this river downstream.  Back to our side.” 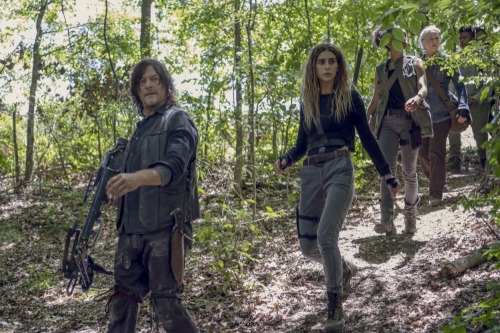 on another note, i watched norman reedus’ autocomplete interview today and 1) that dudes life sounds like a fucking rollercoaster like how many whacked out opportunities just landed in that mans lap huh?? and 2) i consistently allow myself to forget that daryl’s voice is not norman actual way of speaking because i am a buffoon and he catches me off guard every time with the fact that in fact is not gruff or backwoods sounding at all

#an episode of me forgetting that actors be getting paid for ACTING, #twd, #norman reedus, #daryl dixon, #whatever idk what to tag, #bea.txt
0 notes · See All
powerduoconylAnswer
Just sitting here in my feels, thinking what if next season Daryl’s arguing with someone, Connie comes over, signs something and the person Daryl is arguing with asks him to translate and he says “she told me I should kick you ass” or something else snarky.

A scene where Daryl translates for Connie 😭 oh God, I think I’d explode. 💓💓 I already find it so sweet that he carried around an ASL book and that he signed to a group of people when she wasnt even there. 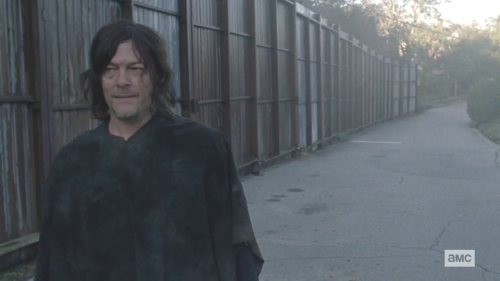 My hopes for the Caryl heart to heart. 💘💘

She walks through the lonely halls of the house and drags her tired feet to her room. She struggles with the bag but removes the strap off her body and lets her bag fall to the floor with a thud. As it collapses to the ground she finds herself wanting to do the same thing. Instead she begins removing her jacket, wincing and groaning as the pain shoots up and down her arm. She groans and throws her head back and lets a single tear fall as her chin rests in the air before slowly with sad grace, lowering it back down with her eyes closed. She keeps her eyes closed wishing she could hush the voices in her head that haunted her all day yesterday and accompanied her on her way back home. With agonizing pain she is able to discard her jacket. She reached for the buttons of her shirt as another tear made itself known and slid down the curve of her face.

She was in so much pain and in deep thoughts that she didn’t pay attention to the footsteps that had been following her.

“Hey.” His voice was low and soft.

She turned around and opened her tearful blue eyes. Her lips parted as they froze in place, speechless…

“Hey…” it’s all she could say as her eyes watched every move he made.

“Looks like you could use some help.” He pointed towards her shoulder.

“This isn’t the first time I’ve had to put my shoulder back in place.”

His eyes lowered before meeting hers again. He walked into her room without losing eye contact. They were breaths a part. She could feel his breath on her lips. He could feel her shaking break on his lips.

“C’mere. Let me help you.” He unbottons her gray long sleeve shirt until her black cami is revealed. He carefully slides it off her shoulders without losing eye contact. He notices a strap that fell down her shoulder. He slides it up with his palm then gently wipes away a tear that slid down her cheek with his thumb.

She stands there unable to speak. She has so much she wants to say but she’s afraid he might say something she fears. Maybe he is still mad at her? Maybe he cares about her too much to say it and it’s hurting him more? Maybe…

He notices her eyes moving back and forth. She’s thinking about something. Suddenly, he frowns.

“Oh, no. This is it. He’s going to tell me he can never forgive me for all that I did…” the concern is evident on her face. She lowers her head as her lip quivers. “I shouldn’t have come back.” She wasn’t aware she said that out loud..

“Hey, now..” he places his hands on each side of her face. “Carol. I know we need to talk, I can see your eyes running a mile a minute, but we need to fix your shoulder first.”

Her lips part and she closes them again as she nods her head in agreement. He ushers her to her bed and tells her to lie down…..

Carylers let’s finish this together. 😍🥰

I would love a: “For the record, I wouldn’t have rested until you came home. I would have gone out looking myself. But I know you. I know you need time alone. You had me worried that you may have been gone for good and I can’t bear that. I can’t go on wondering if you’ll come back to me again. That’s the greatest hurt you can give me.” Cue Carol turning her head as tears consume her. A sob let’s itself out and she expresses everything that she’s feeling, everything that she’s gone through…

Dating Daryl Dixon would include:

Here is my newest fanvid.

Thanks to @itsmymeaningoflife for telling me about the song.

I saw someone in the 5sos tag do this (I forgot their name) and it looked fun so I wanted to do it too. I wasn’t tagged obvi and I’m not gonna tag anyone, but if y’all want to do your own feel free cuz it’s really fun and interesting to see other people’s favs!

Rules: name your top 10 favorite characters (or people) from 10 different fandoms then tag 10 people. (Or don’t you don’t have to)

I’m just gonna stick with tv shows for my list, in no particular order:

Caryl officially is that couple everyone knows about except the two people concerned (even the guy who has been in jail for years knows!).

“I could never let that happen.”

Okay Alpha dying and Negan becoming the new Alpha is GREAT and hilarious and im here for it cuz..Alpha fuckin sucked. But..

Wheres my girl Connie. I would like her back please and thank you, I think I deserve something good since yall cunts killed Carl >> i would love to see a donnie reunion cuz its what we deserve o k- it better be fulla hugs and tears and beautiful- 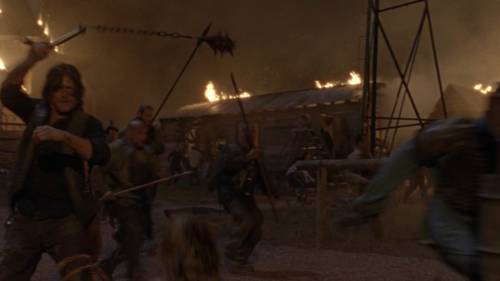 Anybody else love the fact that Carol’s subconscious (as Alpha) specifically taunts her by telling her that Daryl won’t forgive her for what happened to Connie?

The embodiment of Carol’s self-hatred and pain tries to convince her that Daryl has feelings for Connie and that those feeling supersede his feelings for her. That Daryl will never forgive her.

We see that one of Carol’s deepest, darkest fears is that her relationship with Daryl could ever be broken beyond repair.

It’s that voice telling her she’s not good enough. The idea of Daryl being upset with her is as painful to her as the other things “Alpha” uses against her in that moment. Guilt that she couldn’t protect Sophia and Henry. The pain of “look at the flowers.” And the idea that Daryl would not accept her. THESE are her deepest fears.

But here is the beauty…

Just imagine the moment when he finally convinces her once and for all that they’re not broken.