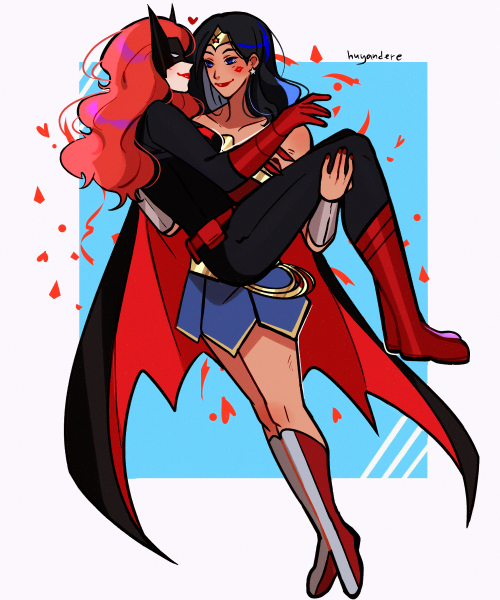 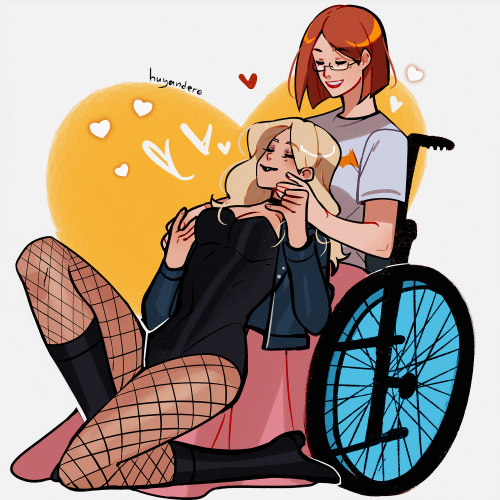 James Gordon: Barbara, you can’t spend the rest of your life in there

Barbara Gordon, in a box: I can once they put in my high-speed internet connection.

Put on your war paint. 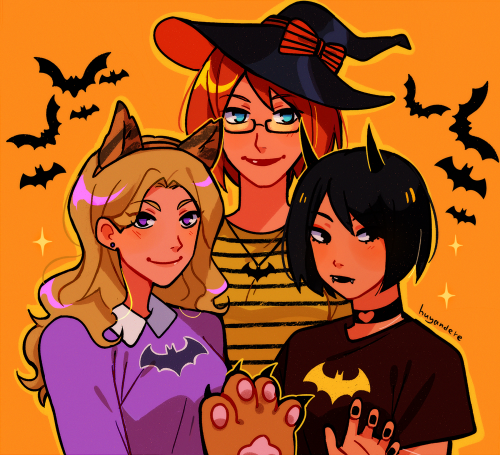 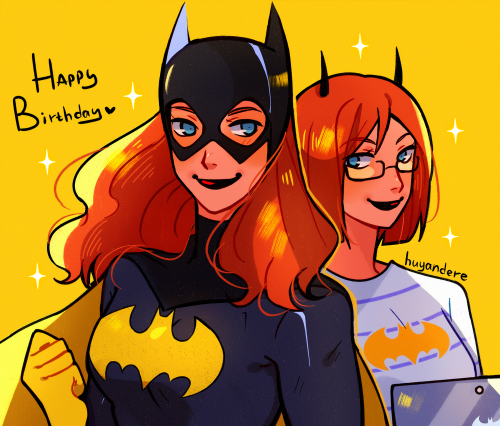 Yesss - I am always down to answer questions for my favorite girl!

I think more than anything else – Babs wants what she does to make a difference. Not necessarily in the grad I changed the World kind of way – but in the smaller kind of way. I think there is a part of her that feels replaceable and she struggles with that some. I know this sounds odd – but she wants to have a purpose. Babs is the kind of person who has a hard time relaxing because she needs to always have a reason and a purpose – so if you were to ask her what she wants most in life is to have value – when what it really is – is that she wants to be valued.

28.) When left to their own devices, how would they spend a free day?

First off – getting the girl to actually take a whole day is rough. But – with a full day I think she would want to get out, drive for like an hour or two to some little town that has parks or is near by a state park or something. A perfect day would probably start off with a farmers market – then lunch as a picnic that got put together at the farmers market. Then checking out local bookstores and antique shops (they can be harder to navigate in her wheelchair but that doesn’t mean she doesn’t like them). She doesn’t really buy the stuff – but she likes looking at it. Dinner would be at some local place and she likes trying new food all of the time. It would be a day without a schedule – and she puts days like this off over and over and over again – but she loves them when she finally lets herself relax enough to do it.

Thank you so much!!!

Seriously - I’m loving this. The questions come from THIS post and I’d love to answer more 💛💛

Obviously Batman – but he is someone who she gets to know and sees his flaws as well. By the time she’s Oracle she has learned how to call him out some too.
I think that Wonder Woman is someone who Babs looks up to too – and I think that with looking up to Diana, who sometimes kills her villains, it gives Babs some conflicted feelings about Bruce’s rules. I want to just reiterate though “"We have a saying, my people. ‘Don’t kill if you can wound, don’t wound if you can subdue, don’t subdue if you can pacify, and don’t raise your hand at all until you’ve extended it.'” Because I think it would be important to Babs too.
Barb also looks up to her dad. I think he has worked really hard to raise her and she respects that. He’s a little bit like Bruce though too – there are obviously things he’s messed up – but that happens when you realize the adults in your life aren’t perfect.

Other:
Audrey Hepburn – so I HC Babs as a dancer – ballet specifically. (For me she has a really complicated relationship with it because it was something her mother guided her into as a way to live through Babs – but then it was a control thing) Regardless, I think she really looked up to Audrey Hepburn who was a dancer – and snuck messages past the Nazi’s during WWII in her ballet slippers.

2. Who do they look to for guidance?
There is a lot she doesn’t go to her dad for because even though she knows he knows about her secret identity – they both pretend he doesn’t so he can have plausible deniability.
She sometimes goes to Bruce. If she’s looking at a case she’s more likely to go to Dick or Tim to look at with her
When it comes to more emotional stuff – like you know, human things – she talks to Dinah. She talks to the other Batkids too (the older boys specifically because she tries not to let the younger ones see what she sees as weaknesses) but really and truly, she goes to Dinah. I also HC her as being close with Artemis Crock – and the two of them go to each other but it’s more for comfort than a “what should I do?” kind of thing.

Thank you so much Dottie!! I loved this!

What up, shes Duela, shes 19 and she never learn how to f*cking read.

Jkjk, but she still prefers reading Babs read to her.

i keep hearing what a brilliant and complex character barbara is and unfortunately young justice only gives her enough to be intriguing as hell. are there any animated series or films that put her in the forefront?

also! come join my dickbabs discord! I post sketches there as well and talk about their babies and granpa bruce/uncle damian as well: https://discord.gg/8YWcsUG 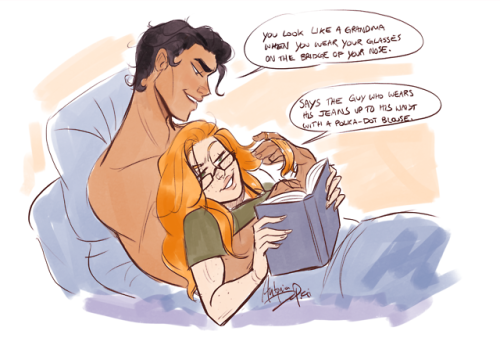 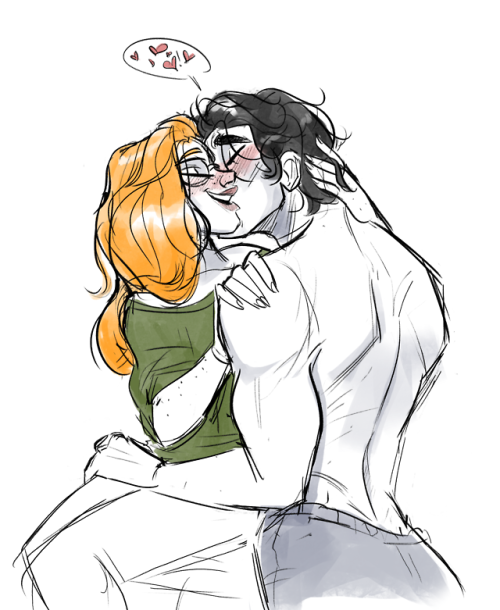 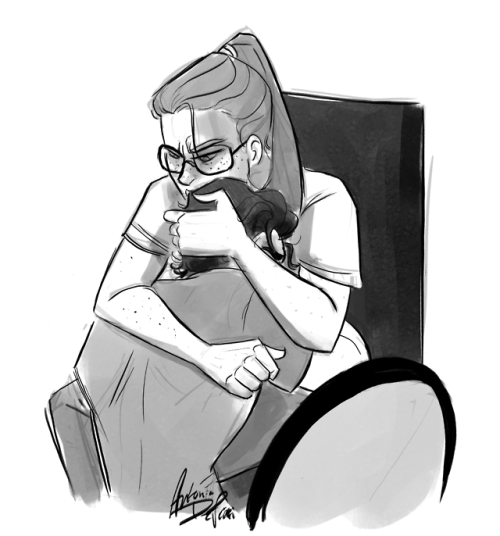 Today’s picture, I’m dedicating to @avataraandy, who draws Barbara with lots of freckles, which I adore, and who’s DickBabs art gives me life. Thanks for sharing all your hard work and spreading the love for Babs!! 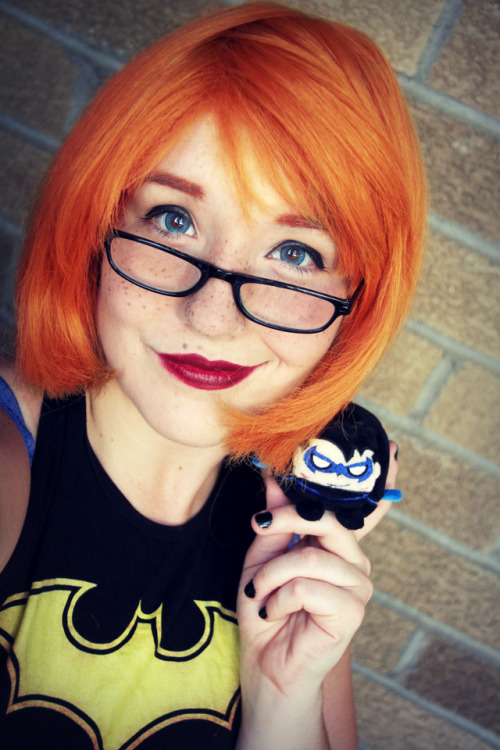 A little downtime after a long day~ 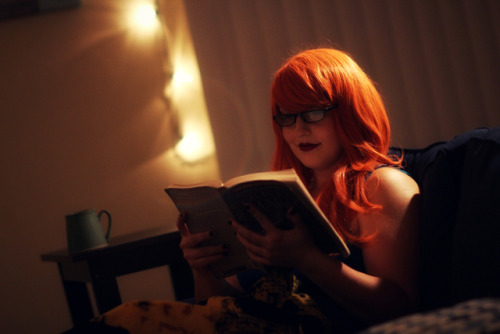 AU in which Barbara was taken on as the first Robin, instead of Batgirl, and went on to become Nightwing.

(Read as: I wanted to get more use out of the Nightwing suit I have and I would actually love to see this AU. *v* ) 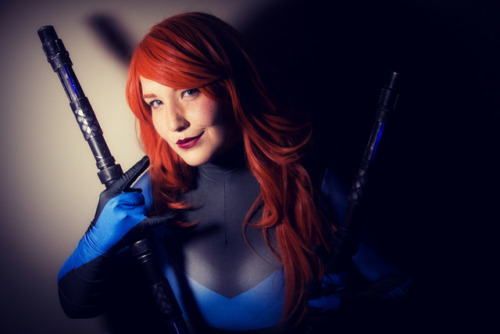 Seriously, if it wasn’t for having to maintain her secret identity, she would have been kicking ass by hand in that wheelchair. She’s a legend. She’s too powerful. 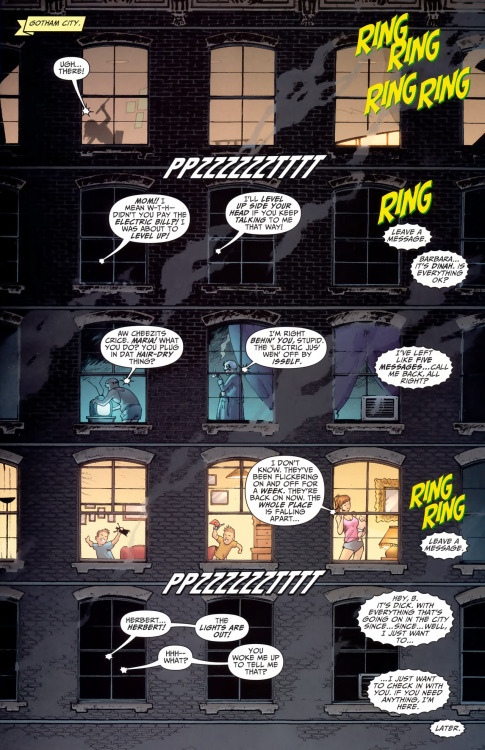 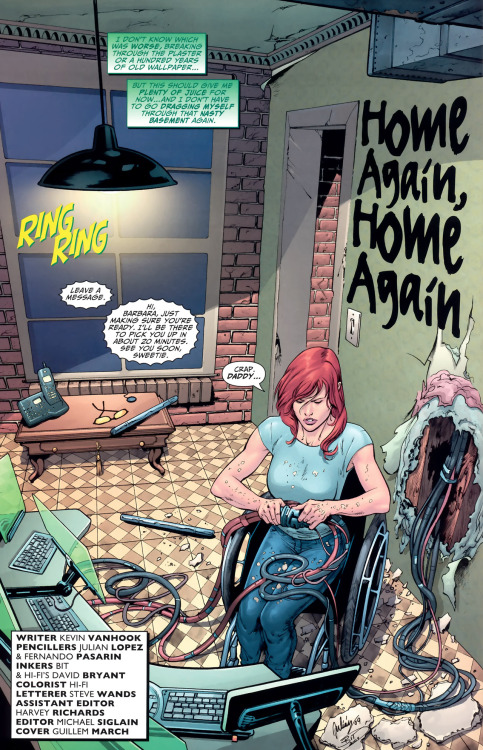 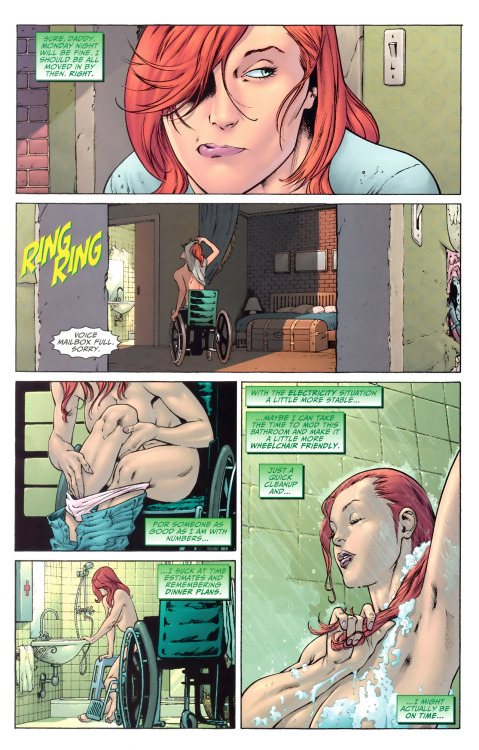 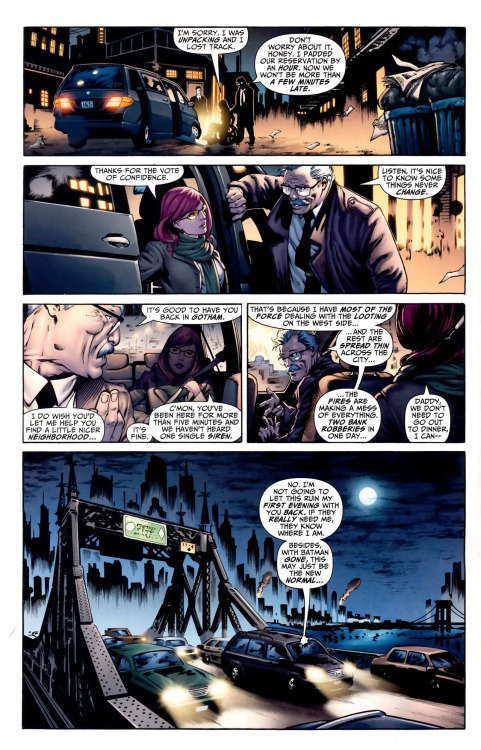 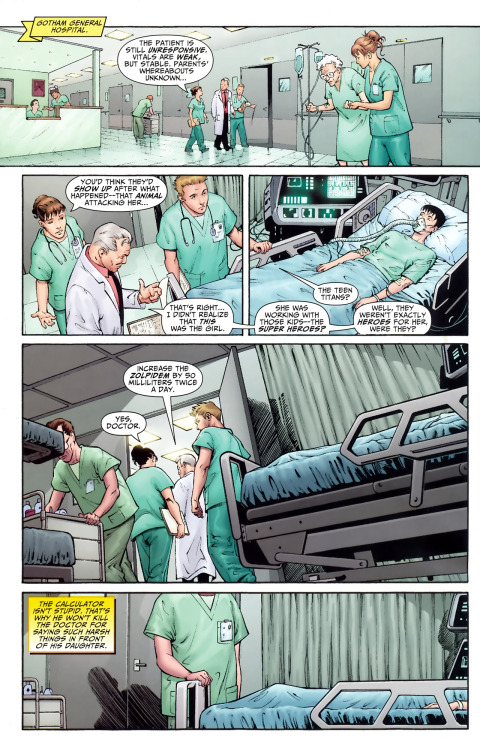 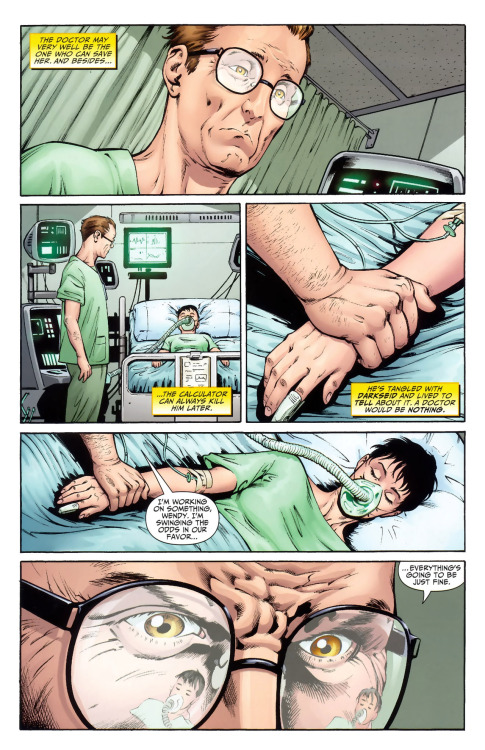 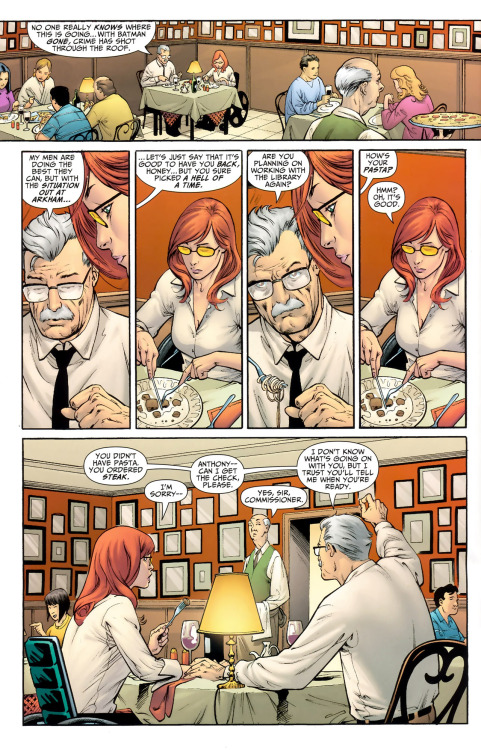 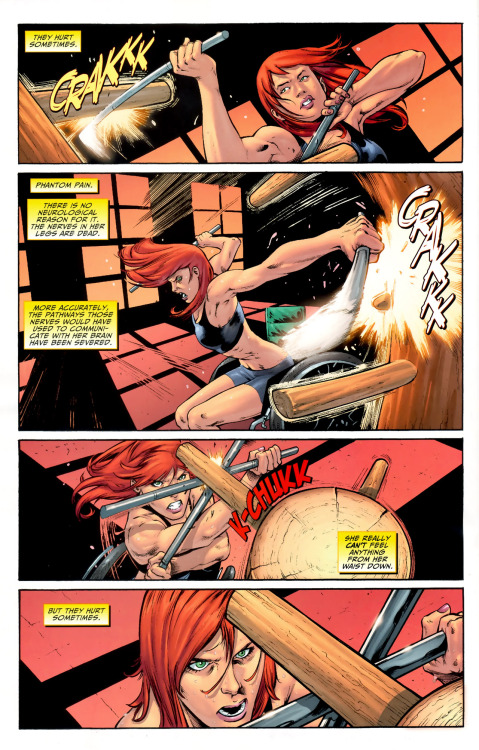 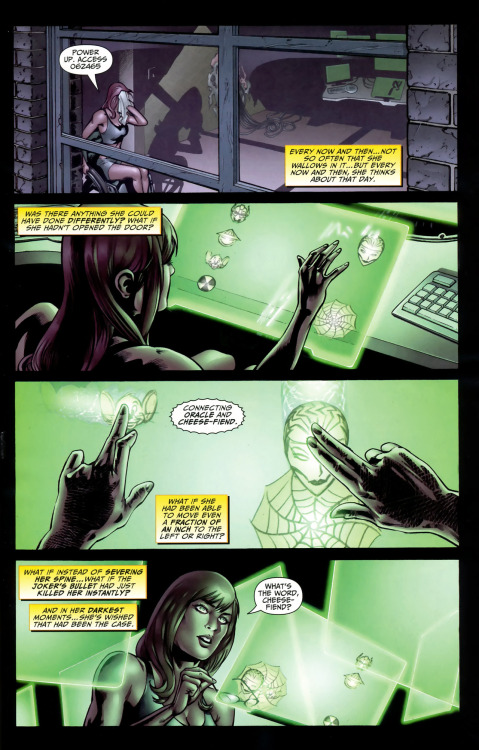 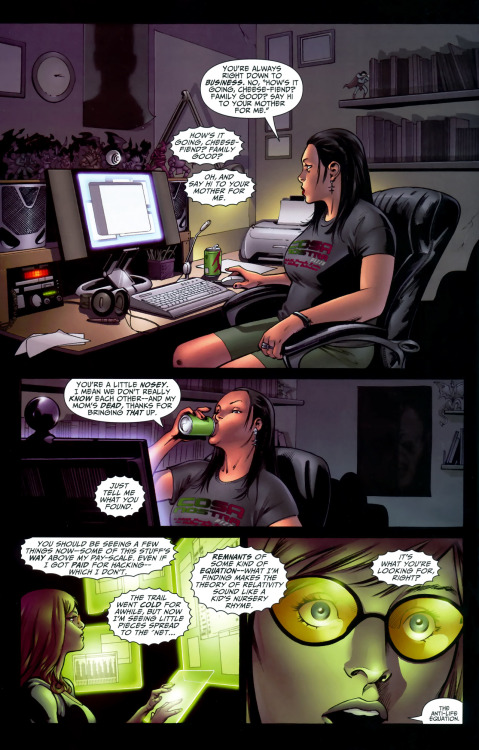 she used to be batgirl

Of all things, doorbells are the problem.

Not gunshots or clowns or face paint. Not silhouetted men. Not coffee, and not even that apartment.

(Hawaiian shirts aren’t too great for her sanity, either.)

She remembers everything with crystal clear precision, like a camera went off in her brain.

(The irony of that isn’t lost on her.)

The therapist’s mouth twists, a failed attempt to hide surprise.

She pushes on her wheels and rolls a quarter inch forward, a quarter inch back. She tells it again, the story of that night, and it’s exactly the same as the first time.

She tells the story over and over again at every session for a month. It’s always the same. Minds, the therapist says, sometimes try to protect us; it’s why a lot of trauma patients can’t remember what happened.

She smiles, as patronizing as the therapist’s words were. Eidetic memory is a bitch.

A quarter inch forward, a quarter inch back. A mindless tic. Something to do with her hands while she tries to make the hour go faster.

Before, she would’ve tapped her toes.

The doorbell rings and her heart nearly stops.

Adrenaline rushes through her, buzzing along her veins. Something metallic, almost bitter, tingles across her tongue. A roaring sound fills her ears, like the waves of the ocean only a thousand times louder and angrier. Time slows, the world tilts.

“I got it,” her father says, mistaking her stillness for inability.

No! she screams, but no words come out. She’s paralyzed, can’t move.

(more than usual, a little voice pipes up from the corner.)

Her father answers the door.

She calls Dick. She needs to talk to someone who isn’t her father, yet another therapist, or any number of food and package delivery drivers she surprises by opening the door before they can ring the bell.

He doesn’t answer, and she hangs up without leaving a message.

What would she say, anyway? Hey, it’s Babs. We haven’t talked in a while, just wanted to see how things are with you. Give me a call when you have the chance.

(Better than what she’d say if he answered.

I feel like the world’s imploding in on me. Everything’s moving too fast, except for me, I’m moving too slow. My head’s spinning out of control, I can’t stop reliving that night - why can’t I just forget like everyone else. I’m angry all the time, except when I’m sad. I’m a fucking mess. I couldn’t even watch the Oscars, for all the flashing cameras.

I don’t know how not to be Batgirl.)

Best that she got his voicemail.

Therapist #6, and she’s considering calling in a favor with one of the Arkham doctors. Just get her a prescription for something so she can sleep without nightmares, something so her heart doesn’t speed up every time she sees a misplaced tourist wearing a gaudy tropical shirt and a stupid hat. They all know what happened, she could probably get away with nothing more than a phone call.

She fidgets. A quarter inch forward, a quarter inch back. Therapist #6 has plants in the window, bright green leaves, healthy and full, but no flowers.

She found Therapist #6 through Alfred, somehow. She hopes Bruce goes to therapy. She hopes Batman doesn’t.

A car drives past outside and the bright Gotham sun glints off its windshield. The angles aren’t in her favor, and the glare flashes into her eye.

She flinches. Therapist #6 stands up and closes the blinds.

“I was Batgirl,” she says. Confidentiality applies even to superheroes.

Therapist #6 nods and sits back down. “And now you’re not.”

#dc oracle, #oracle dc, #barbara gordon, #how tf do i tag superheroes someone please enlighten me, #s:words, #s:dc
33 notes · See All
Next Page