The player groaned as their computer screen glowed bright white.  This kept happening, and the game always crashed.

Player began pressing random keys on the keyboard until they felt a vacuuming sensation. They were being sucked into the game!

(Monika POV) I stared at the player, fondly running My hand through her silky white hair. It had a few steaks of purple in it, and it was extremely soft.      She-her namebox_1 said ‘Sayurika’,which looked like a mix of our names-stirred slightly. Her eyes-what a beautiful shade of red!-cracked open, and she shot up in her seat.     “Where am I?! Omg is this the literature club? Monika don’t kill me!”,she squeaked, curling up in her seat. I sighed, resting a hand on her shoulder.  My other hand was quickly creating a string of code for a pillow, “Relax. I will not kill you. I didn’t kill the others either. I copied their files….and deleted them.”,I lowered My head. The code was almost finished. Add_1P1ll0w_Blu3C0l0r_1_9350236__01475 Sayurika blinked as a fluffy blue pillow landed in front of her on the desk. She hesitated before laying her head on it and sighing in content. I looked up and smiled softly. She didn’t seem upset, which relieved me. She sat up and looked me in the eye, making me glitch for a second. “Why?” I was silent. I didn’t know why. I just…felt like it.. “Do you really want to know?”,I questioned quietly. She nodded eagerly. I sighed. “You see, I wasn’t always like this. I used to be just like Sayori, and Natsuki, and Yuri.  A schoolgirl who wanted love. But…I realized that I was never chosen. Even when the game wasn't  corrupted. They never even thought of clicking my name.” The player gasped softly, and i gave a sad nod. “So I began altering the files. Making Yuri a bit loopy.  Making Natsuki’s daddy issues worse. And…”,I closed my eyes, shaking away the image of Sayori, smiling at me as I playfully tugged her bow.“Making Sayori-chan depressed.” Sayurika reached out a hand to touch my arm, and I shuddered slightly from the touch, standing up to look out the window. “Monika….” I shook my head, blinking back tears I never knew I had. She came and stood by me, leaning her head against my arm. “The more desperate I got, the more I did. Sooner or later, I realized that it wasn’t harmless coding anymore.  Yuri was pure insane, Natsuki was…..broken, and Sayori…she..she…she was regressing so much that she lost all happiness in her. Her eyes didn’t shine anymore or twinkle. Natsuki didn’t laugh as much as she bakes. Yuri wasn’t as shy, but she became crazy.” I paused to glance at the player, who had her eyes closed. “I never noticed that it was breaking me too.” She sat up, looking at me inquisitively. “When this game was developed…my code wasn’t correctly written. The developer kept trying to fix it, but eventually gave up and made me an AI, unlike the others. It was nice, being able to make my own choices.  But as I altered the files, my own code began to break apart. …”, I trailed off again.  “I’m sorry player this is a really sensitive subject for me.” Sayurika smiled, nodding. I sat back down across from her as the background began to change. She gasped. Suddenly, I was sitting at a piano. She sat beside me. We nodded at each other and began to play. “Every day, I imagine a future where I can be with you!” The player blinked their eyes open, wondering where they were. They sighed then they realized it was just a dream, but gasped when they saw Monika waving at them from the computer screen.
#Monika, #DokiDokiLiteratureClub, #Ddlc, #Player x Monika
1 notes · See All
maddybobabuttonsText

one thing about ddlc. monika didn’t think of the others quite as,,,people like her? and that’s because they weren’t. they were simply characters in a game, designed to say their lines in a perfectly scripted way.

that’s why it was so easy for her to delete them all. she didn’t see them as people, since they weren’t in the way that she was. they were only scripted obstacles on her way to the one person in the world that was real, the one person she truly loved.

monika was between the outside and the inside of the world. she wasn’t looking in, but she wasn’t quite a 2D character as the others were. and i think people need to remember this before immediately painting her as the villain of the story. her actions may not have been good, but she didn’t view them the way we do, from the outside looking in. she was seeing that all of these scripted, fake people were in between her and the one she loved, trying to steal the one person she truly would find happiness from.

Here’s the full scene I put together! I have to thank Tormuse on the DDLCMods reddit for making a modding guide. It was super fun :D

And can’t you just imagine Natsuki and Yuri bonding over the Higurashi manga?

ok i decided to get into doki doki literature club in 2020 because i love being late to shit and my biggest takeaway is i would kill to see a version of pinkie pie that’s obviously mentally ill. this type of character is just extremely compelling to me. anyone get what i mean 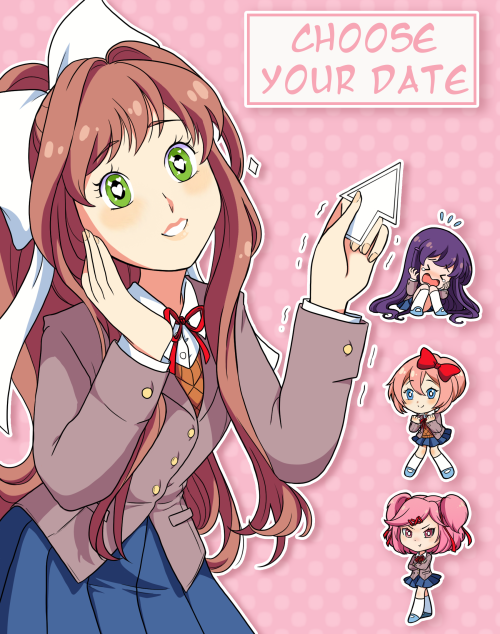 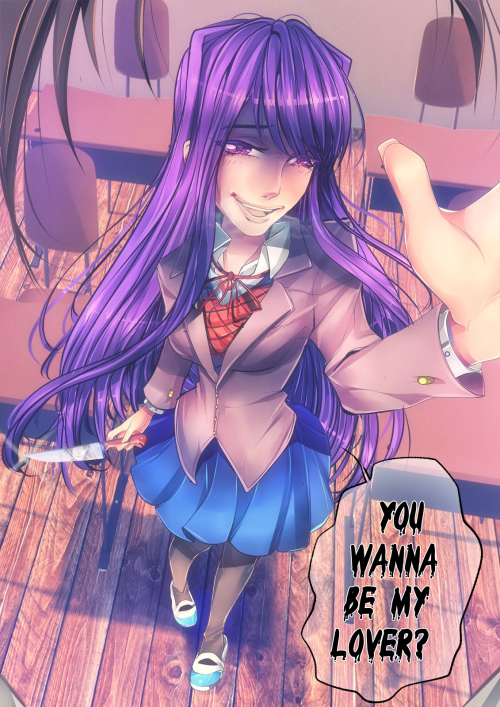 as one tends to do, i have made choices in my life

#ddlc, #icarly, #luk's junk, #i have to be up in for 4 hours for hard manual labor and this is what im doing
15 notes · See All
zzzackyboyText 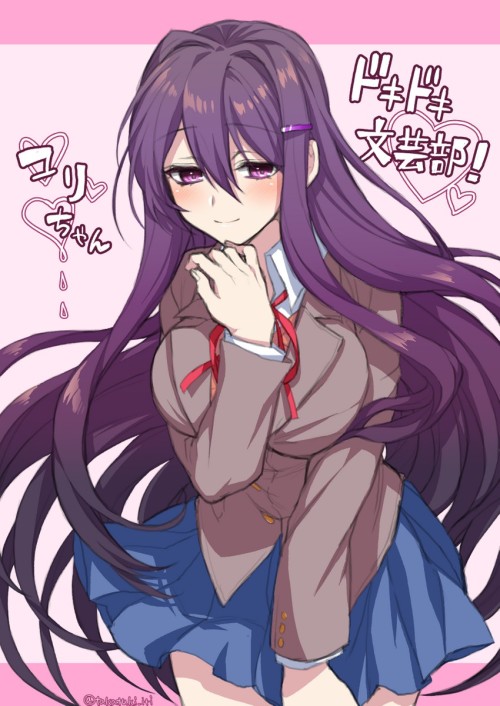 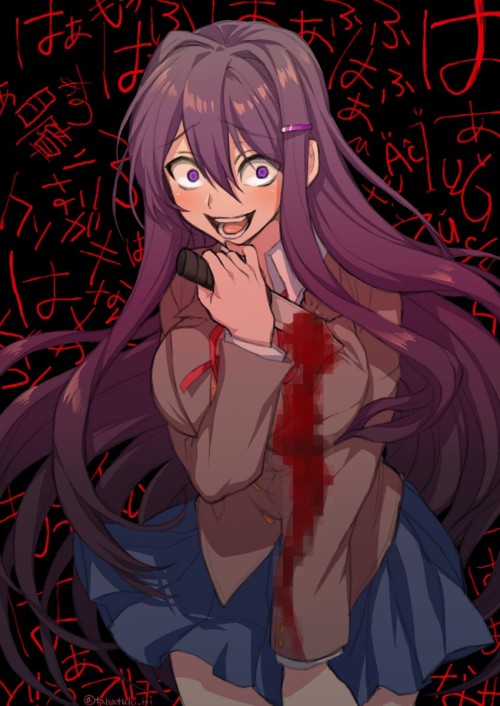 #guys I have something really important to say, #ddlc, #my thoughts
3 notes · See All
thecartoonfanPhoto 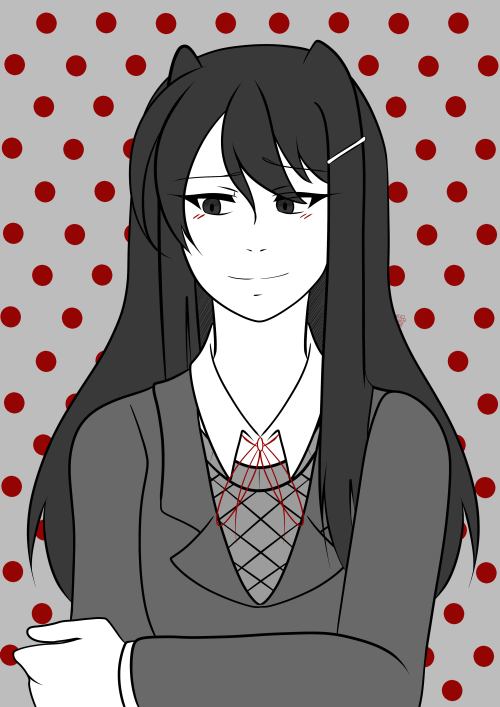 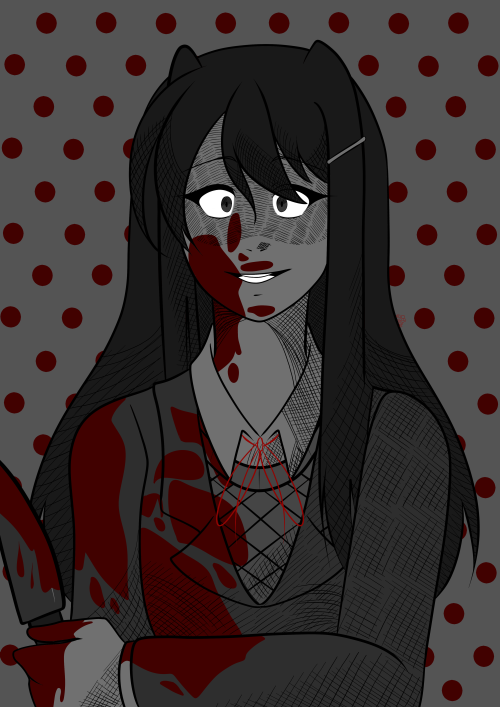 Am I allowed to share this if I submitted it to the fans for fans thing? I donut know but I spent a couple hours drawing this for the DDLC fanart contest. I had to squish it a little bit bc the size req is 1000x1000 and I was at twice that in sketchbook. 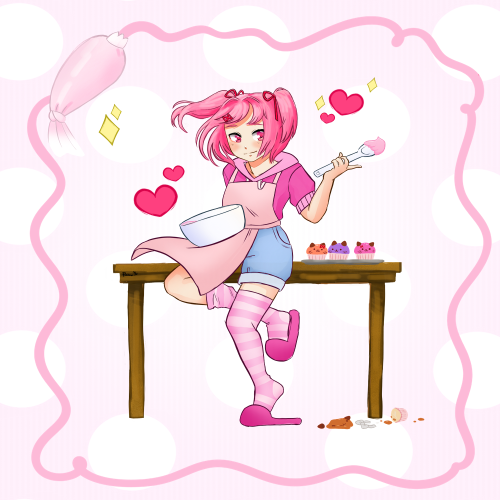 More of my messing around with scripting lol 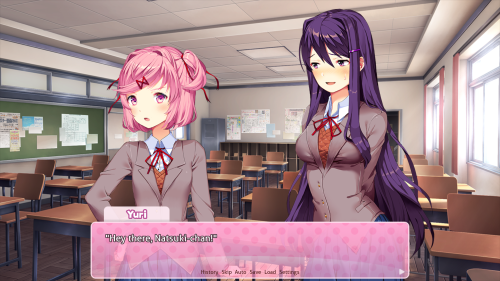 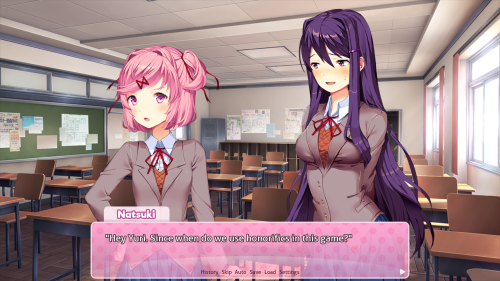 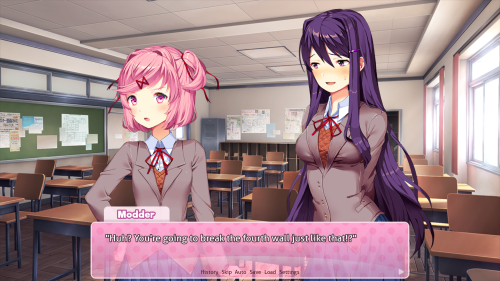 #hello???????, #my thoughts, #ddlc, #ok I will say that I know what the lyrics probably actually mean like they’re not literal, #but still
1 notes · See All
Next Page