“why didn’t you just leave me there then?”

Emmanuel/Amnesia Cas kills demons in 7x17 and recovers his memories.
He’s lived for thousands of years if not eons, but all of the memories shown are pivotal  moments between him and Dean:
The moment he met Dean
the moment he ‘fell’ for dean / betrayed the angels for Dean
the moment he betrayed Dean
“I’m sorry dean” at the end of season 6 - when Cas was putting purgatory souls back in purgatory.

nah actually wtf is this 😭 mf not even pinning him to the wall just . gently holding him in place ???? gay ass

yes i am making up ways to make this whole ordeal more painful.

Tell me that this isn’t exactly the kind of interaction Destiel would have.

Sam: I think Cas got injured earlier on our hunt.

Cas: I wasn’t injured. I was lightly stabbed.

Dean: I’m sorry, you were STABBED?

Cas: Lightly stabbed. I didn’t want to frighten you.

Leave it All Behind - Loser_Angel_666 - Supernatural [Archive of Our Own]
An Archive of Our Own, a project of the Organization for Transformative Works
archiveofourown.org
#destiel#dean winchester#supernatural#castiel#fanfiction#deancas#destiel fanfic#inspired by the queen herself: Taylor Swift
0 notes
shatteredatthealtarofwinchester
Answer

#deancas#destiel#dean winchester#castiel#spn#supernatural#every day i come here put on my little mushroom hat and proceed to lose my mind over deancas#fandombee.exe
2 notes
treatlifewithkindness
Text

i wish i knew how to quit you

personally i’m of the belief dean knows what cas’ trueform looks like because he saw it in hell. he was so freaked out when he came back because he knew he was rescued by something extremely powerful because he SAW it but he had no reason to believe it was an angel. dean also understood cas’ real voice in hell and that’s why cas tried to speak to him with it in earth and it didn’t work

i mean; this was basically it, right? lmao

It’s been two months since everything happened. They’re coming back from a haunt and they decided to do th groceries on their way hom cuz they had invited over everyone for dinner. Sam tells Dean that he’s going to propose to Eileen tonight in front if everybody. Dean’s happier than he’s been in a while. But something inside him twitches. He’s over the moon for his brother but something is still missing inside him. He stays silent for the rest of the road and the time he was spending making dinner, which Sam notices but decides to stay quiet about it. Dean hasn’t opened up ever since and Sam never brought it up because he knows how’s it like to lose someone you love. He remembered watching Jess Sara and Elieen die in front of his eyes. But for Dean is different. He bas watched Cas die multiple times. Although Cas always managed to find his way back to Dean, but this time, it seems like a dead end.

When everyone comes over they spend the night talking, joking and messing with each other. Both brothers are deeply happy for Clair and Kaia. Even Adam is there and he’s trying to make friends with others. After defeating Chuck and losing a dear family member they decided to keep as many possible people close to them, so they wouldn’t lose contact with their friends and family, or losing them generally.

Everybody feels the abnormality of Dean’s behavior that night. He’s not the batshit person as he used to be. He barley even laughs and sometimes gets losts in the crowd. Which everyone notices but unanimously cosider to not talk about it. His eyes don’t shine like they used to and he looks like he’s in his late 40s. His bad drinking habits are increasing again and sleep is not a thing he’s familiar with.

After their guests leave, Sam goes to Dean to check on him, instead he finds his brother sitting in the corner of the hall, his face buried in his hands, and his body shakes each time he sobbed. Sam runs to him, kneeling beside him in silence, waiting for dean to open up.

Several moments later Dean finally stops. Leaning the back of his head on the wall staring at the view in front of him, tears covering his cheeks. “He told me he loves me Sammy, and the he was gone. He thought I never felt the same for him. The stupid son of a bitch didn’t give me choice. He left not knowing i love him too.”

He was wailing again. Shutting his eyes and letting the tears stream down his face. Sam remained shut. Which Dean was thankful for. They leave to bed a couple of minutes after. Dean pets Miracle and lays down on his bed with his dog beside him.

He stars at the ceiling, talking sharp breaths. Trying to gather the words in the right order in his head. “Cas, I hope you can hear me. This is the first time you didn’t come back to me. You stupid bastared gave me a big ass lecture and left me. Never gave me the chance to say it back. I know you can hear me. Whatever is this thing between us, the profound bond you used to talk about it, I don’t think it’s ever gonna leave me. You’re stuck in my head … in my heart. Please man you need to come back to me ok? We can fix this, like we always do. Let me say it Cas. Let me say how much I love you too.”

He stays there remaining silent a bit, and after closing his eyes, he falls asleep.

And then there is a voice echoing everywhere, clear as a bell, Castiel is saved.

A ko-fi sketch for @catgrrrrl-blog who asked for some deancas and dean blushing 💚💙
Went for some old school deancas with this one, as cas knows no personal space still pff 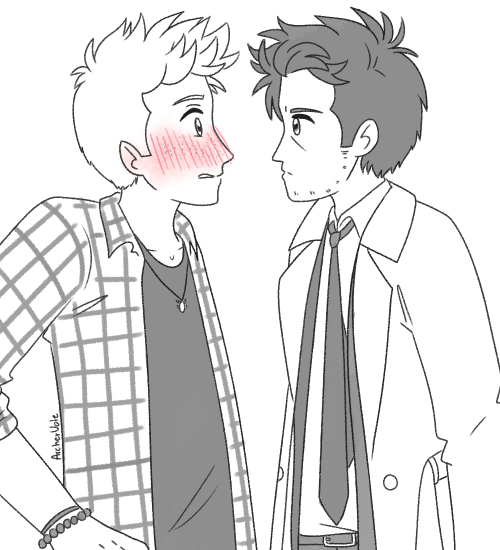 okay but imagine karaoke time during the wedding reception

Crowley takes the floor and starts singing “It must have been love, but it’s over now” by Roxette

but Dean and Cas? they’re in the middle of the dance floor, looking inebriated in a mix of alcohol and happiness, just dancing to the ballad without even listening to the words

and everyone just relax

(Sam is nowhere to be seen, having been sent on a goose chase while he was trying to avoid this exact situation)

Updates: Every Friday my schedule allows

Additional tags: Quarantine, Mentions of COVID-19, Isolated Dean, Touch-starved Dean, Alternate Universe - Aliens, Alien Castiel, Abstract conversations about the universe, Castiel’s true form, And they were roommates, Domestic Fluff, They’re on a ranch, Horses and Kittens, Eventual smut, Consentacles, Basically If a fluff fic and a crack fic had a tentacled baby it’d be this fic.

Summary: Really giving how the year’s been going Dean shouldn’t be surprised. After all, the only thing missing from the end of the world was aliens.

in the year of 2021, it is impossible to comprehend that a post like exists without any correlation to destiel…? but what about presidents?!?! surely thats got deancas all over it!!