Mostly this is Fanshawe’s “I Am Going To Kick Jonah Magnus’s Ass” song.  Captures well how Jonah was responsible for two deaths in the friend group and doesn’t seem to give a shit and meanwhile Fanshawe is a fountain of grief and rage in a person shape.

Into My Arms - Ane Brun Cover

I don’t believe in an interventionist God
But I know, darling, that you do
But if I did, I would kneel down and ask Him
Not to intervene when it came to you
Oh, not to touch a hair on your head
Leave you as you are
If he felt he had to direct you
Then direct you into my arms

This song came into my house and instantly blasted me in the chest.  Just the most Salesa at Dekker song.  The energy of begging a being one does not believe in to keep someone else safe.  Also???

#i also only have dreams about school. why is it that i only have dreams about trauma cant i just have something nice#i still have dreams with my mom in them and they r very frequent#SORRY THT GOT REALLY SERIOUS I JUST. DONT KNO WHATS WRONG WITH ME GBFDNGBNFD#moon rambles#mother mention#death mention#like not directly but just in case#my brain is soup
0 notes
2maii
Text

there’s something misleading about me,

To draw a line but i ended up going in circles

wish i can blame it on drugs but i never used any..

Wish i can blame it on my bad friends but i don’t have any..

Is it mental illness

I think the 27 club person keeps making new accounts because this the third time I’ve had to block them.

A bit about the character:

She’s Sparrows sort of adopted daughter (idk it’s a little complicated) they meet at the first sighting of the dragon in Leanis (Minari’s home village). Sparrow saves her life by shielding her from a collapsing building and he ends up injured, after this Minari refuses to leave his side. Sparrow agrees to teach her all he can but he ends up separating from her after a few years because he feels that Minari shouldn’t be taught by someone who only knows how to fight and survive (he does not want her ro follow in his footsteps, he wants her ro live her own life). They later reunite after the deaths of sparrows two most trusted friends and from there on they stick by eachothers sides.

The left I portrayed Minari witnessing the destruction of her home village because it is a staple part of her character Yada Yada (you get the point lol) and tge right is her revisiting the burned down remains after many years of neglect and growth. This is where she truly realizes alot of things about her and sparrows relationship (its actually a pretty sweet moment ngl)

Dont mind me i just needed to rant a bit :)

Tired, pale eyes stared blankly at the oily puddle at her feet. Not even the iridescent swirls sluggishly flowing about the tainted water could make the reflection any more tolerable to the mutt. These feelings were not new; like heavy clouds over a lonely mountain, they were always there.

Oh was I supposed to make his clothes? I didn’t want to for… reasons. 😁

As for how Secco got his mask… Well in this Mer Au.

It was a gift from Cioccolata, he never takes it off. Secco loves his gift and even sleeps with it on. Cioccolata found it from a dead human floating on the water. He had this bag with him. They had all these masks on them, ones that were in many colors and ones with designs. Of course, Cioccolata picked that one Secco wears now out of the others because it reminded him of Secco’s tail and the colors.

Just to let you know, it was Cioccolata who killed the human. He just surprised him, making the man fall into the water. He died with the look of fear on his face. Oh of course this was something that Cioccolata got off on.

Every time I see a story that looks like it’s about to enter “actually being a magical girl is a bad thing (for any reason)” I want to reach for my proverbial gun. Like, “what if the monsters aren’t actually bad guys” or “you have to murder other human beings” or “you’re inevitably going to die”, whatever (and also not to be confused with “I don’t want to be a magical girl”, which is different). Just. I’m watching you, which is to say, I’m about to not be watching this if it’s a show.

The exception is maybe an adult going “you’re kids, you shouldn’t be putting your lives on a line” when it’s not just a clear-cut case of Adults Are Useless, and even then, you’re on (slightly-less-)thin ice.

If you have a dog that keeps getting loose, you do something about it. You don’t just shrug your shoulders and go about your day.

My cat is dead and I’m still finding blood around the house.

/rp /dsmp (talking about the characters)

i cant be the only one thinking of how fucking terrible it wouldve been if dreams plan actually worked, right? tommy in prison, tubbo dead, dream repeating the cycle of abuse on tommy again.  sam, probally in a awkward position because this wasnt what he built this prison for.  he built it for a dangerous person, not for some traumatized kid.  probally overhearing dream talking to tommy during visits, hearing dream just add salt to the wound, and then pretend to be tommys friend again.  the internal conflict sam would probably have experienced.  man ow

please help me. i honestly think i might die if you don’t.

Yea I also thought the cookie looked a bit like dozer but gingerbrave and him are confirmed to be the same age so i doubt it was him,, also he most likely got eaten as ovenbreak hints it,,

Locating the leaders of the operation easily, Olin demands to know who is responsible for the fire at his childhood home. Ignoring him, Rachel decides to toss in one more jab at Nika.

Rachel: “Hmm, blue with a baby face. I guess I kind of see it Nika. Didn’t get a good look at him earlier.”

Rachel then steps up and admits it, saying it was done in retribution for Yager men destroying their weapons depos.

Olin: “Heh… is that what this is about? You killed my mother over some lost weaponry?”

Rachel: “Oh did she die after-all? It wasn’t our intention but it’s possible our method of sedation was a bit too much for someone with such a weak constitution. Truly I am sorry for your loss.”

Olin: “I am sorry too. Very sorry that I am not more forgiving.”

And without hesitation Olin creates a small black hole in Rachel’s chest and tosses her into the depths of space.

Now alone Inika and Olin have an awkward conversation about all their secrets being laid bare. Ollie expresses disappointment that she’s working for Hansen but she retorts with:

Nika: “Not all of us were the born with the luxury of powerful connections Olin. Some of us have to fucking make them.”

Ollie states her boss is a monster and rightly Inika points out that he just murdered someone and really has no room to talk.

Then she explains that Rachel had acted against her orders and that the fire wasn’t something even Levi would have wanted given the tension between all the Kasri families but that being said she still didn’t want to do it. Rachel had been right about one thing: she did have feelings for Ollie.

They sleep together but Olin admits after that he can’t return her affections. It just isn’t there for him, especially after what has happened.

He does care about her but he’ll always associate her with the death of his mother. So they part ways with Ollie vowing this will be the last time they see each other. 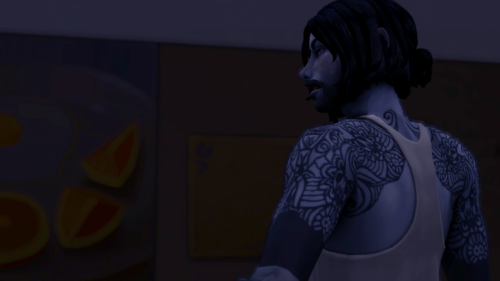 #i swear to GOD everytime im like i like that character :) theyre killed later in the story#like. every single one#rengoku. nanami. hughes.#p sure if there was a possibility bokuto couldve been killed too#jjk spoilers#kny spoilers#jo.txt#death mention
3 notes
ask-mutant-ko-n-tko
Answer

“Er… the week after he… stabbed the therapist he was here, but… not the whole time… The Edgy KO kinda killed him with some… sharp weapon. And… he spent the rest of it not alive…”

fellas is it gay to get your friend to pose as a dead body stranded in the middle of the ocean for a painting about one of the most gruesome contemporary tradegies of the time instead of a model “just because” and also you’re both quintessential politically-driven Romanticism artists?

#dark academia#romanticism#art history#gericault#the raft of the medusa#sometimes u learn a fact in art history and your gay brain goes ''hm'' so u have to make a post about it#points if anyone knows what tf I'm talking about lmao#the pose is rlly something; maybe its just because it focuses on his hand but good god#anyway dont mind me#death mention#relatable content#original
3 notes