Things I don’t do:

The six fanarts asked by @misty-120 click for better quality

The squad in quarantine:

Kirishima: training, playing pranks on everyone with Kaminari, or playing ‘how long until katsuki gets annoyed and hits us’

Denki: reading manga, texting memes to his friends who’re in the same apartment as him, playing pranks on people with kirishima. (Mainly on bakugou)

Sero: mostly just watches the chaos but occasionally joins in, trains a few minutes a day with bakugou, reads and practices his cooking skills

Mina: makes sure everyone is still eating a consistent diet, pretends to be unamused by Denki’s texts but secretly saves every single meme, reads a lot, catches up on gossip with her gals via FaceTime while bakugou and kirishima ‘argue’ in the background.

(One of my personal favourite ships, dare I say I enjoy it more than kiribaku.)

I posted another video on my channel! But of course it’s blocked in some countries bc why not? If ur not from US or uses VPN, you can watch it. TT.

I’m a youtube newbie, and I’m confused why the site have so many memes with HK and they dosen’t get blocked. 😑

#denki, #jirou, #kaminari, #yaomomo, #boku no hero, #bakusquad, #tsuyu, #deku, #Bakugou, #Bakusquad, #Dekusquad, #Kirishima, #Bakugou's kitchen, #Tsuyu
2 notes · See All
theravencawsatmidnightAnswer
Scenario villain denki that treats his s/o more like a pet than a person. He makes her wear a shock collar and causes it to shock her every time she’s bad and makes her sleep in a cage or keeps her there when he’s gone. When she begs for him to treat her normally he tells her he will when she starts acting like one instead of kicking and fighting him like she usually does. He tells her if you act like a pet I’ll treat you like one.

You woke up in the cage . A shock collar around youre neck and little dog paws tied to youre wrists . All you had on was panties . You were.. not exactly the best girlfriend to Denki. And well, he was sick of it. So he thought up a plan , if you wanted to act like a animal, then he would treat you like one.

He wasint home. He wouldint be home for another 30 minutes. You were hungry , how sweet of him to leave you a bowl of puppy food right? You knew what would happen if you didint eat it though. So you did, you leaned down eating up the kibbles with a disgusted look on youre face.

When he did come home you were sitting criss cross waiting. He smiled kneeling down in front if you looking through the bars. “Hi puppy! Did you miss me?”

You glared at him and Denki tilted his head. “You..you didint?” He pulled his necklace out revealing a button. “Cuz if you didint….”

You fell to all fours nodding at him fast and he quickly put the necklace under his shirt. “Oh you did!!! Oh im so happy!!!” He unlocked the cage yanking you out and hugging you. “Puppies are suppose to miss their masters silly!!!”

“Den..ki..” you pleaded kissing his neck

“And you ate all youre food what a good little girl you are.” He said ignoring you . “Cmon lets go watch tv yea?”

He got up going to sit on the couch . You whined and he looked over at you .

“Puppy come curl up by my feet and watch tv with me !”

Youre throat dried up. He wasint listening , you pushed him past the point of reasoning.. this was.. youre life now. Feeling defeated, you crawled over, tears in youre eyes . You curled up by his feet and you felt his foot on the back of youre head petting you. He had a smirk on his face looking smug.

can’t see him as much of an artist, but considerin’ his ability to furnish/enhance a plain space makes it kinda apparent,,

i see him aspiring to be a pastry chef in specific.

she can be an amazing interviewer and would be great on camera as well, you can’t convince me otherwise-

considering his surprisingly large vocab, i as well see him as a pretty badass writer, heavy reader and someone who’s interested in languages

Friday nights are girls night at Mina’s. Mina is the only girl. The boys come over with snacks and the gossip for the week, and they watch silly chick flick movies and rom coms while Mina does their hair, nails and makeup. The squad acts like it never happens but everyone in the dorms knows.

#girls night, #mina ashido, #mina, #bnha, #bnha headcanons, #mha, #kirishima, #bakugo, #bakusquad, #sero, #denki, #headcanon
9 notes · See All
the-broken-halo-writerAnswer
Could I have a ship for Haikyuu and BNHA? I’m a straight 5’6 female. I have grey eyes and long dark brown hair. I’m pretty introverted but eventually I’ll open up and show the silly side of me. After I open up I can become pretty crazy. I have a vulgar/dirty sense of humor and I’m usually really sarcastic. I love music and dancing! I also tend to sleep a lot. One of my favorite things to do is go on late night drives and listen to music and I also have an obsession with coffee! Thank you!

For Haikyuu, I ship you with Tanaka!

Hinata was an honorable mention

For BNHA, I ship you with Kaminari!

Procrastinating abilities: out of this world

… I have an online physics exam in two days. Help…

online classes are just as bad as you can imagine 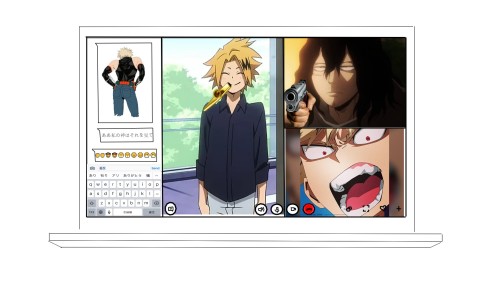 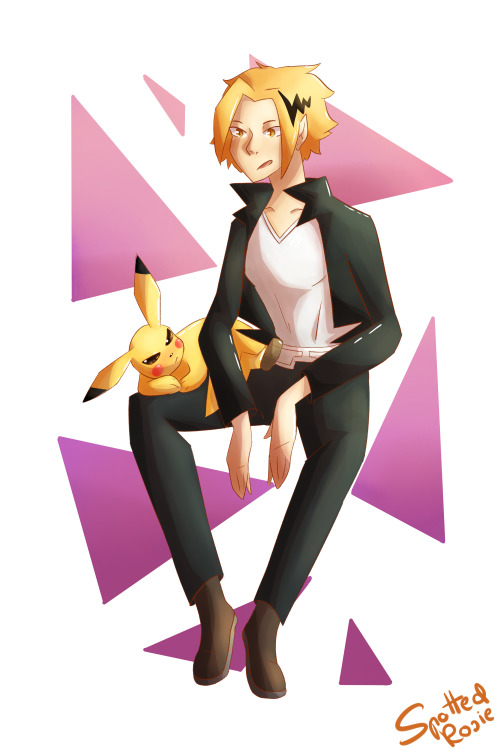 kaminari denki listens to doja cat and that’s a fact

Villains: how did you-

Kmainari: It seems you have stolen something very dear to that store owner over there 🙆👈😤

Villains: can you expl-

Kmainari: you thieves are going to ⚡⚡

Kaminari: *whiny* I said to StOoOoP

Villains: this is painful to watch please do arrest us…

the funniest shit he’s ever seen, b rr u h 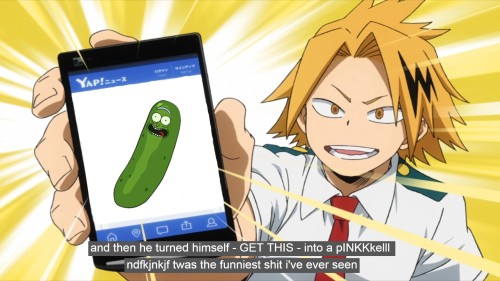