Based off of this 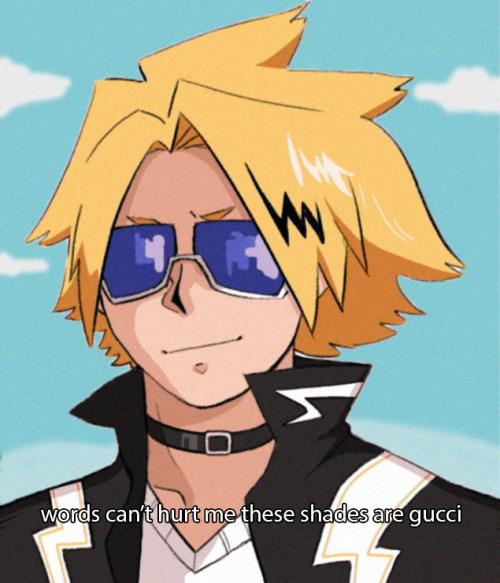 #Kaminari, #Denki Kaminari, #Shit posting, #I couldn't help myself when I saw that pic lol, #my hero academia, #mha, #What am I doing
1 notes · See All
strong-little-butterflyPhoto 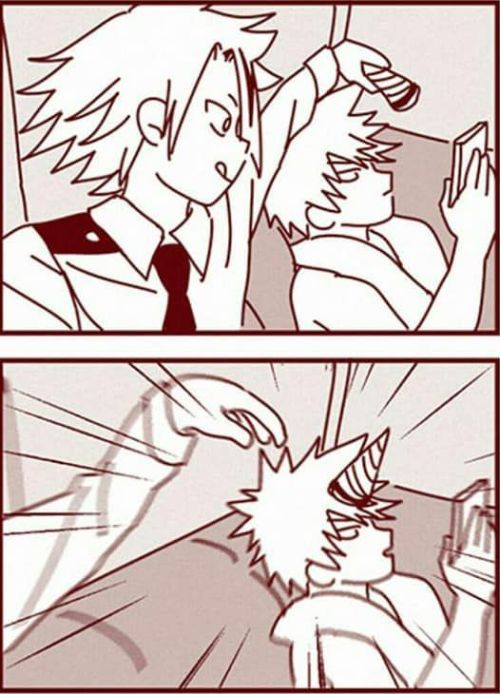 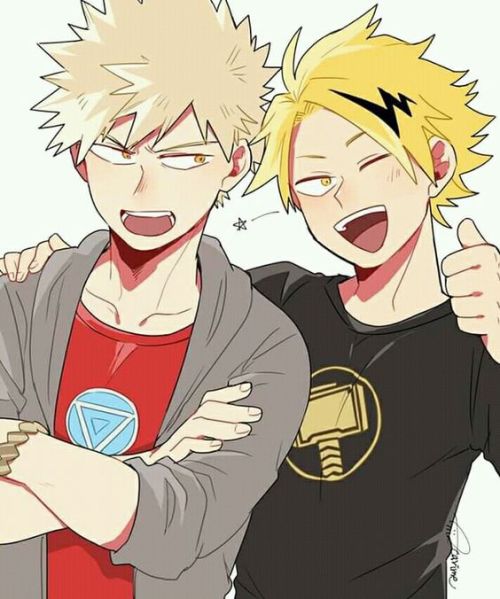 I vibe with this

Idk if I’m gonna do this digatly, but I love these two. So here is kami being sleepy and clingy with his tape Bf. He needs cuddles.

#bnha, #mha, #boku no hero academia, #my hero academia, #owo, #uwu, #my art, #denki kaminari, #kaminari x sero, #hanta sero, #kamisero, #serokami
2 notes · See All
golden-dumbassText
#bnha, #boku no hero academia, #mha, #my hero academia, #katsuki bakugou, #bnha bakugou, #mha bakugou, #bnha bakugo katsuki, #bakusquad, #bnha kaminari denki, #denki kaminari, #kaminari denki, #bnha mina, #mina ashido, #ashido mina
15 notes · See All
macademicsAnswer
Thanks Sero-nii, I feel a bit better now. I'm just worried I'm going to accidentally confess before I'm ready to. *turns to Kirishima, Mina, and Kaminari* Right? He is a good guy underneath all the rough edges! He's just so cool. And I know that Todoroki-sama is cute but I don't have those kinds of feelings for him. If I asked him out it wouldn't be fair to either of us. That said, I do think that I'm getting through to Bakugou-sama a little, he didn't immediately push me away when I hugged him.

Hanta Sero: “Right, just don’t rush and take your time, these things shouldn’t be forced.” *Pats your head reassuringly* “Any advice you need, we’re here for you.”

Mina Ashido: “We’re thinking of gifts for Bakugou, not for you, Gym head!”

Eijirou Kirishima: “A self help book on anger management?”

Denki Kaminari: “HEY!! I WAS GONNA GET HIM THAT FOR HIS BIRTHDAY, DON’T STEAL MY IDEA!!”

Mina ashido: “A good suggestion, but it would send the wrong message.” “We need a gift that says ‘i like you’ that’s subtle so it won’t scare him off, but still clear enough so it gets the point across.”

Hanta Sero: “Mina, aren’t you maybe over complicating things?” “I don’t think Bakugou would care about a gift, or anything corny like that.”

Eijirou Kirishima: “Yeah I’m with Sero on this one.” “Oshiro, just continue as you are, if your friendship with him is solid, something more may blossom in the future, and if it doesn’t its not a loss, he’s still gonna be your pal.” “He respects those who respect themselves and face challenges head on.” “He’s loud and opinionated and kinda flashy, with his quirk and costume, and boy oh boy is that temper of his short, but he’s not a very on the surface sorta guy, he’s deeper than he appears, so impressing him with gifts is not the way to go.” “Honestly, just support and encourage him.”

Mina ashido: *Pouts* “OOF, you guys are so unromantic!”

Denki. A 21 year old barista at his local cafe was walking the cold streets at dark trying to get to his favorite restaurant but unfortunately he had to pass a graveyard. Graveyards always made Denki sad he couldnt stand the thought of his friends passing away he could barely even look at roadkill without a tear forming in his yellow eyes. He was meeting the rest of the bakusquad at this restaurant as he approached forward he stopped directly in front of the graveyard and thought

“Maybe I can cut through” he paused for a minute questioning whether he should go through or not but alas Hunger and excitement to see his friends dominated his fear and he walked through the gates of the graveyard. Walking down the path he felt something cold before he knew he turned around and there was a man with a black cloak and piercing blue eyes walking to him. Denki knew he should run but fear paralyzed him. The man lunged at him and Denki began to run as fast as he could before he knew it the man caught up and pinned him to a tree before biting him square in his neck. Blood rushed from the wound quickly and the man put his wrist to his face

The man ran as Denki fell to the dirt. Holding his stomach in severe pain. He passed out

The Void Calls These Bastards
by Alyx Aizawa

Kirishima: … I don’t get it

Kaminari: It’s an inside joke

Kirishima: Just bring Bakugo to me.

Kaminari: Well, he locked himself in the bathroom.

Kirishima: Just tell him I said something.

Bakugo: I’m sorry, the sky is blue because it’s reflecting the colour of the ocean?

I love doing headcanons, so here’s some more! I’ve decided I’m going to do 2 characters per headcanon for these!

• Denki likes to think he knows exactly what he’s doing when he goes in for a kiss- despite the fact he’s only ever kissed one person and it was by accident- when in reality he really, truly has no clue

• There’s no doubt that he’d initiate the kiss, the excitement outweighing the nervousness, and make a couple (or several) mistakes in the process

• First, he accidentally bumps his head on yours because he’s moving way too fast and then stutters out a string of apologies, while also asking if you guys can try it again

• When his lips finally do make contact with yours, they’re practically doused in saliva and chapstick (because the boy completely forgot he put any on and started licking his lips in anticipation- whoops)

• You also may or may not get zapped a bit with his electricity (he’s extremely gittery, so it’s more or less expected) but only slightly

• You’ll have to practice with him- which he absolutely, 10000% doesn’t mind at all by the way- but once he’s got it? An AMAZING kisser

• And yes, he will kiss you A N Y W H E R E. He absolutely adores PDA, and will no doubt want to show the world just how much he loves. Big yes to kissing in public if you’re down

• His kisses are both energized and energizing, and he moisturizes his lips constantly. And yea, he kept them moisturized before you guys started seeing eachother, but it’s arguably gotten worse what with your regular make-out sessions (Bakugo can’t stand when you two are anywhere near eachother because he knows Kaminari has no qualms about kissing you in front of him or anyone else for that matter)

• Really, really, really likes kissing both of your cheeks- he can never just kiss one- it has to be both

• Oh, and when the kisses get HEATED, Denki turns into a breathy whiner. He can get pretty loud so you should probably keep the less tame stuff behind closed doors

• Hanta is a pretty chill dude when he’s not being someone’s hype-man or being rambunctious, but the thought of even holding your hand makes him a little nervous- so kissing? Oh yea, incredibly freaking nerve-racking for him at first

• Your lips could be a couple centimeters away from his, eyes closed and leaning into him, and he’d probably still be apprehensive about kissing your soft lips, questioning if you were sure you wanted to kiss him

• He both loves and respects you, but even if you tell him you want him to kiss you, he’d have this unsure look etched  onto his face, so you’ll have to be brave and close that distance (that distance of like…3.81 centimeters)

• Knows from the moment your lips touch his that kissing you is instantly one of his favorite things to do- and he’s not a bad kisser at all, even at the very beginning!

• His lips are thin but very soft (and oh so kissable) !

• He’s not really one for PDA beyond an arm thrown around you (shoulders or waist) and the occasional peck on the lips- he can be a showy person at times, but he definitely doesn’t want people staring at you two while you’re trying to make out

• Also thoroughly enjoys giving you quick, teasing kisses to your nose, fingertips, and the corners of your lips (hhhhh-). But hey, tease him back if you want, he’s all for it!

• Kisses can be soft and loving, quick and playful, or hot and heavy- honestly kinda just depends on the mood at the moment (because yes, he can and will give you all three in the span of 5 minutes)

• When kisses get HOT and HEAVY, he uh- he does this thing that’s a cross between a grunt and a moan. Usually tries to keep the volume down, though (Unless…)

My booooyyys! I love these knuckleheads (UwU) ♡

Feel free to spam me with requests! As for my writings, they are coming along, somewhat. I have been focusing on original pieces over fanfiction, which is nice because that is the main reason why I turned to fanfiction!

I get what you mean with the train of thoughts. I usually end up trying to summarise them into keywords and concepts, or even an image and hope that I will still remember them later, haha! Sometimes it works, sometimes it doesn’t.

It was a running gag that Denki was a portable charger. A powerbank that conveniently could recharge your empty devices. A role to which he protested, but which he diligently fulfilled anyway for he knew how much his friends appreciated him for it, even if it wasn’t expressed.

“Hey, Denki,” you approached the blonde, a pout on your lips as you tried to avoid his eyes. “Can you charge something for me?”

Confused, the male gave you a look before a smile spread over his face.

“Everything for you, [Name],” he beamed back, nearly leaping over to take you into his arms.

and If i did. Would you wanna see:

When the cowonavirus hits and your gucci gang is bored 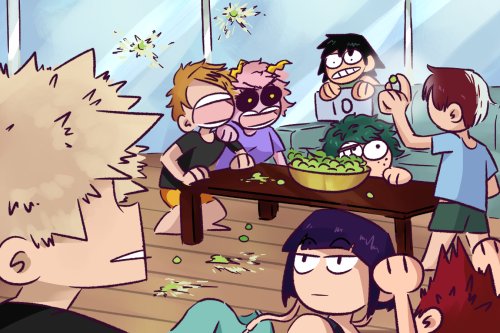 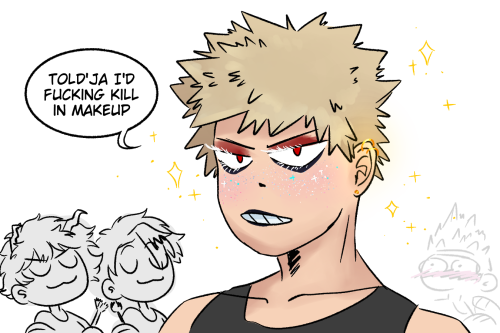