I’m obsessed with alignment charts and I made this

So my friend Lorie @endlessemptynight and I were both on DC Universe Online (The MMORPG, not the streaming service.)

Anyway, the game is currently doing the Seasonal Valentine’s Day event.   We both have several characters in the game but she especially wanted to play the ones she modeled after Desire of The Endless.

You can pretty much make your character have the powers and look of anyone you want within reason.  DC Universe Online is an old MMO (dating back ten years) so it only has options for male and female when building your character. To make up for this, Lorie built Desire on both a male and a female avatar and changes back and forth between them.  Anyway, she wanted to earn more of the seasonal currency because this is the only time of year you can get heart themed products and emblems (sigils) for your character.  So this is essentially harvest time for Desire.

Well, I was tagging along with her on one of my Morphei as we call them.  (I’ve built three different Dream of The Endless on DC Universe.  One of those three is female).

I was on one of my male Morphei (Morpheuses?).  Now the Mr. Freeze mission is probably the hardest holiday event when on Hero mode for some reason.  Most of the seasonal events are pretty easy.

Someone was on Healer mode when we went to go fight Mr. Freeze.  (It’s a four person mission) and that means the boss and henchmen hit harder than usual.   My Morpheus was “knocked out” but before it could time out (which would have locked me out of the mission) Lorie exclaimed out loud on Discord, “I’ll save you, brother!  I’m not ready to have Daniel for a brother yet!” and promptly healed me as their Desire.

And that was, I have to admit, the funniest thing I heard all night. “I’ll save you, brother!  I’m not ready to have Daniel for a brother yet!” 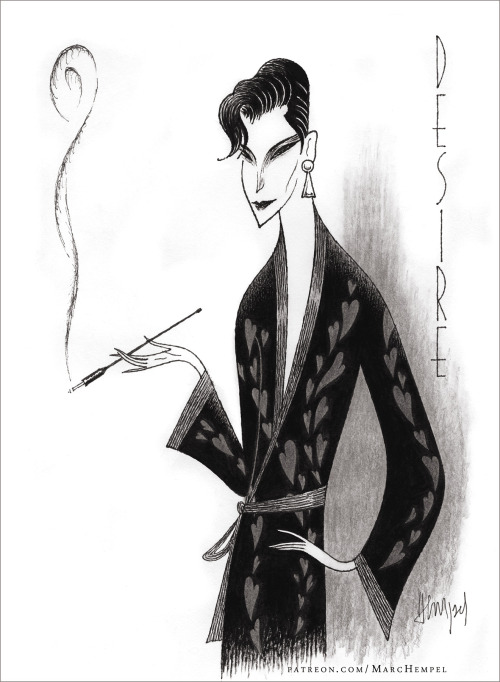 Desire of the Endless - Jill Thompson 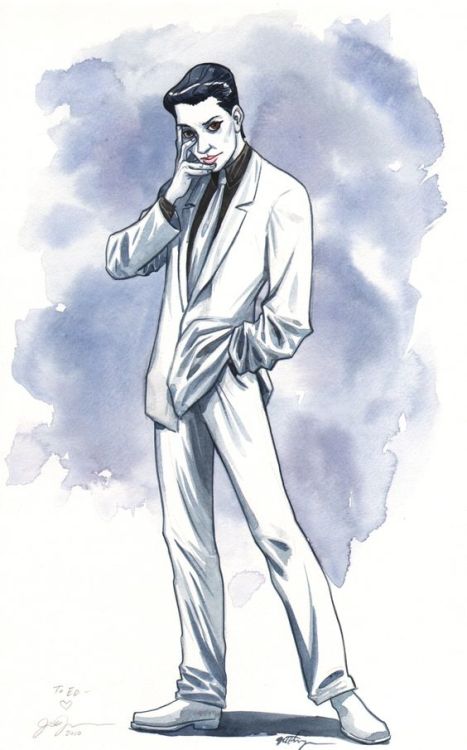 Do you see the demon in me? Do you love her the way she loves you? The heart beats, and slow soft whispers in your ear about what she wants to do to you.

Does she open your mind with images running over her body as each pulls you closer to an urge you can’t ignore. Does she make you gasp at the sight of her silhouette in the shadows beyond your deepest thoughts.

Does she make you whimper at the thought of her touch as she softly caresses the strings of your heart. Does she make you anxious as she slowly crawls closer to you. Do you feel her glide over your desire with her soft lingering touch.

Does she make you crave her touch after you’ve reached your limit. Do you crave her warmth when you’ve pulled away from her illuminating orifices. Do you wish to intertwine her taste with yours every time you breathe.

Could you satisfy the demon in you.

An ink and graphite sketch of Desire of the Endless from September of 2019. 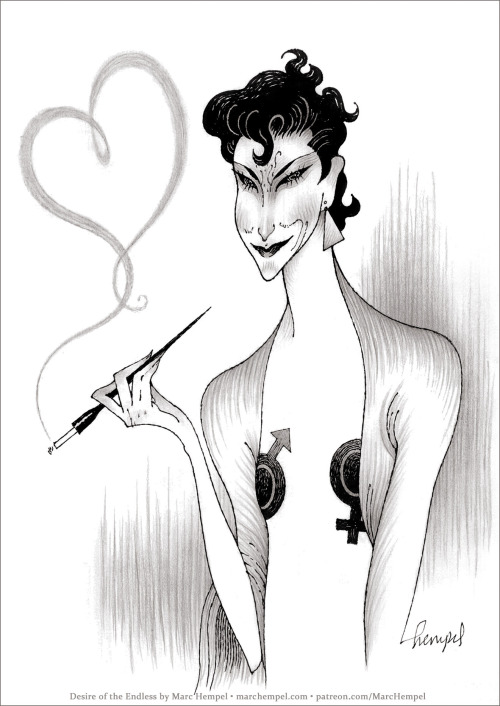 Another canon genderfluid character. I’ve been listening to an audio adaptation of Neil Gaiman’s The Sandman comics, and it is explicitly stated in the narration that they are whatever they want to be; male, female, both, or neither. Probably even other sexes and genders for certain nonhuman species, since Desire and the other Endless are all part of the DC Universe and there’s plenty of sapient aliens out there who may have their own… desires.

(By the way, The Sandman comics are really graphic, and the audio adaptation gets pretty bad because they have to describe all that graphicness. It is not for the faint of heart. 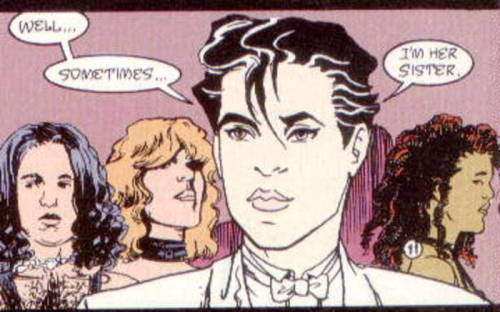 The faces of Desire (and Despair) of the Endless: The Doll’s House

1 to 4: Desire wearing a suit in the Threshold.

3 and 4: Despair invoked in the Threshold.

5 to 9: Desire wearing a cat disguise in the Threshold 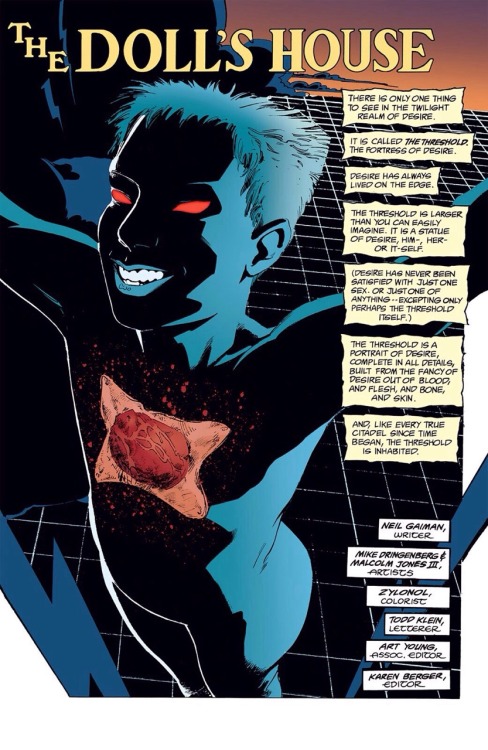 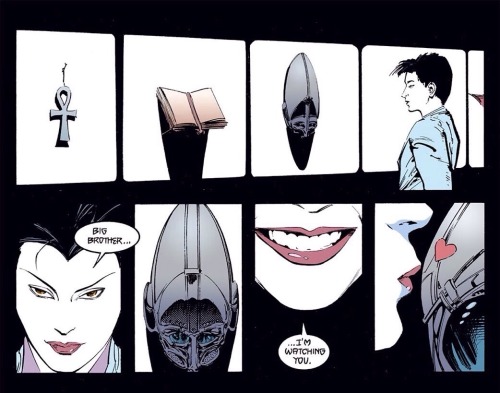 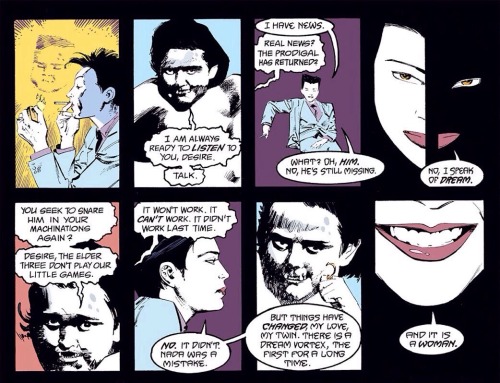 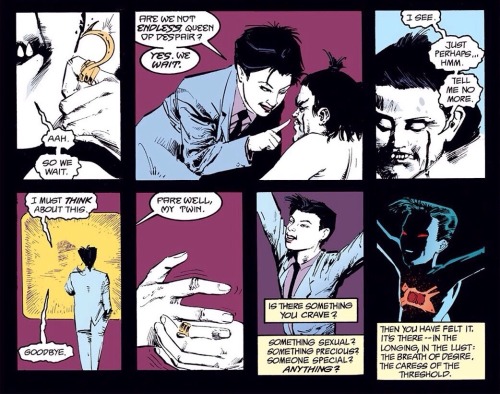 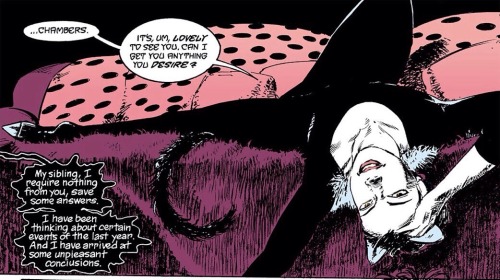 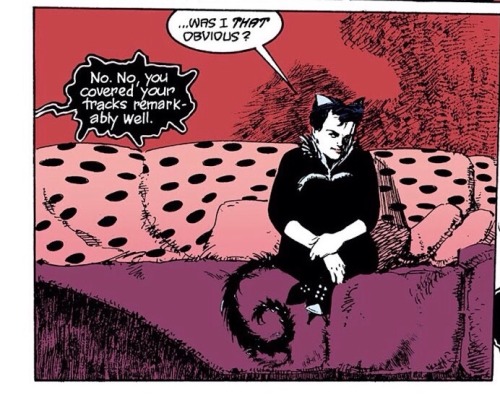 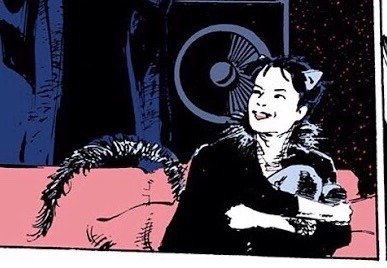 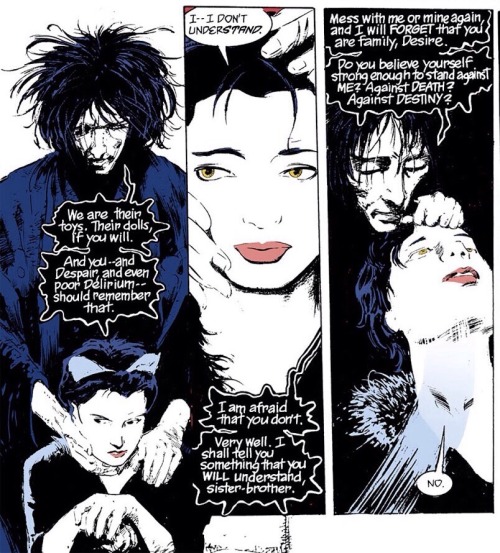 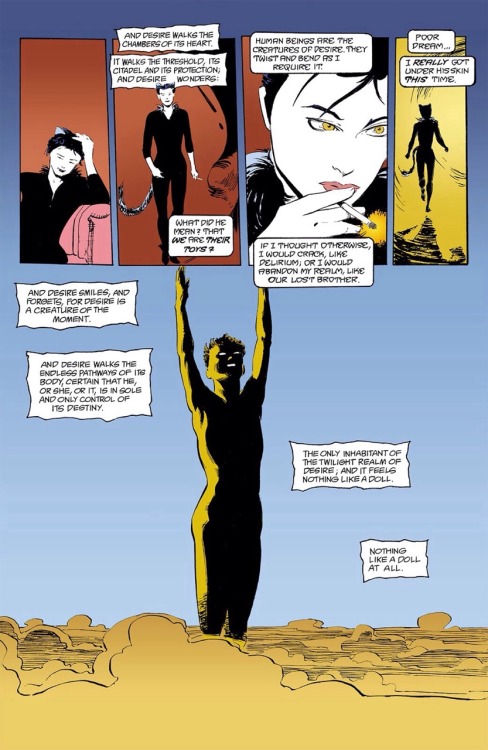 One of the most wild things to ever happen to me on Tumblr was when someone accused me of being transphobic / nonbinary-phobic for calling Desire from Sandman an asshole.   The person also told me to stop blaming Desire for all the bad things that happen to my “fave.”

They seemed to somehow be unaware that Desire had literally raped someone in the hope that the off-spring would be a Dream Vortex so that Morpheus would have to kill the vortex, thus spilling family blood, and making him vulnerable to be killed by The Kindly Ones.   Rape in a convoluted scheme to indirectly murder the protagonist.

That’s right.   I was phobic… for not being okay with rape. And that, friends, is why I shut off “Anonymous” on my asks.

Desire of the Endless - Colleen Doran 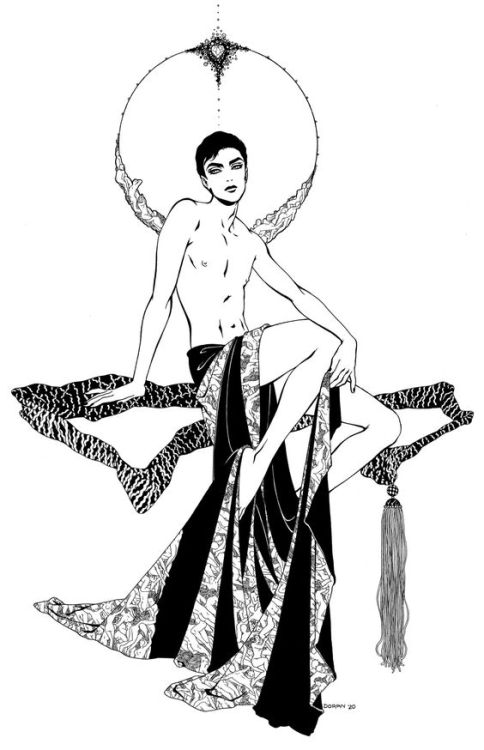 Desire of the Endless, a personification of desire, is an androgynous, gender-fluid character (who smells of peaches!) from Neil Gaiman’s comic book series THE SANDMAN. The TV series adaptation by Netflix is currently being casted (October 2020).

2 of ? .  The quote “I am Desire…” is from the series. [Credits for sources Models were Kasia Struss for Haider Ackermann and actress Thomasin Mckenzie, highlighter image used with kind permission of Mariya AE] 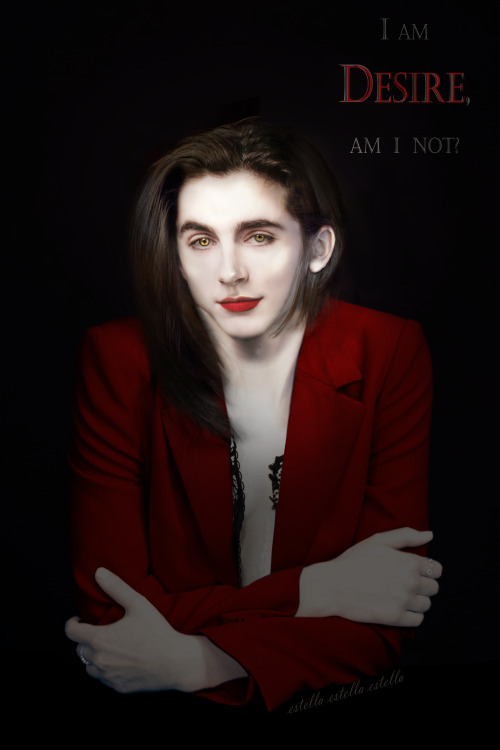 Remember that really good Sandman audiobook that came out a few months ago? Well after listening to it I really wanted to do a Sandman… something. Something lively, with music?

So here’s some character designs and pre-vis for perhaps a short animated something set inside the Threshold, the flesh fortress of Desire of the Endless.

The potential for body horror is salivating. 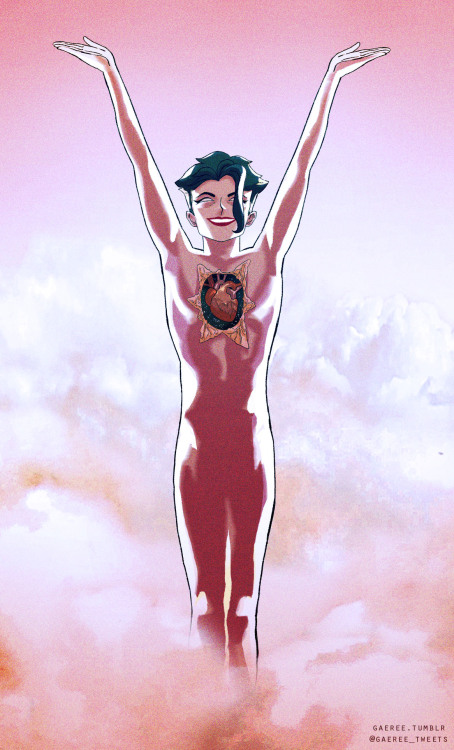 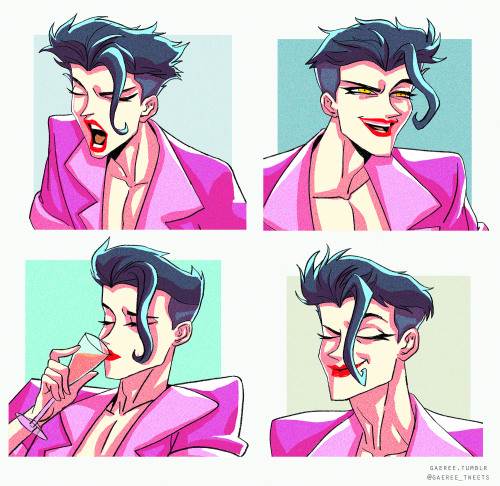 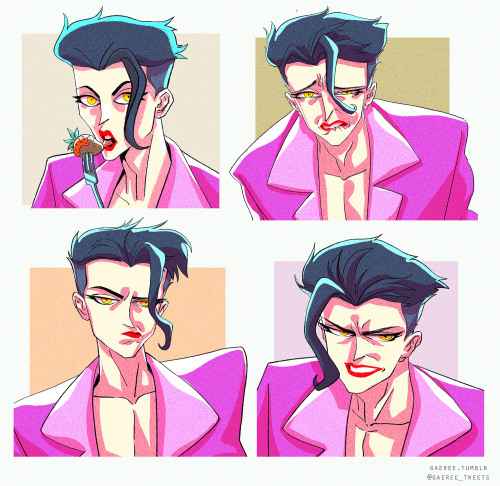 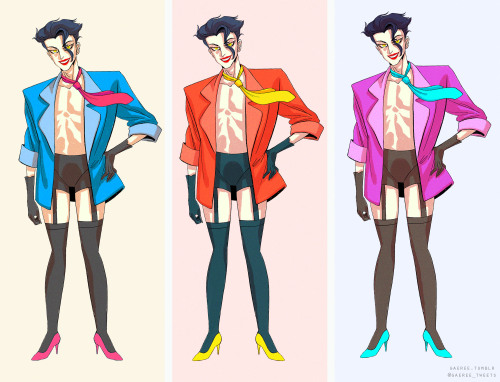 When I do Timmy edits half my time is spent double checking if I’ve messed up the jawline, cheekbones, etc - coz his bone structure is just sooo unreal.  Anyway, nothing to see here people, just Pauline’s sister 😂

Timothee Chalamet as Desire {1 of many}

Desire of the Endless, a personification of desire, is a character from Neil Gaiman’s comic book series THE SANDMAN. The TV series adaptation is currently being casted (October 2020). Desire is a fun character and is described as “… smelling faintly of summer peaches. It is a strikingly beautiful, androgynous figure of gender-fluidity; it can be male, female, both, or neither as the situation warrants. ”

° The Sandman. Desire of the Endless. 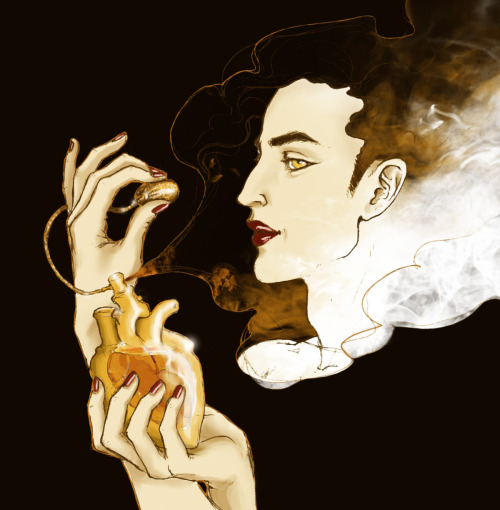 Desire of the Endless 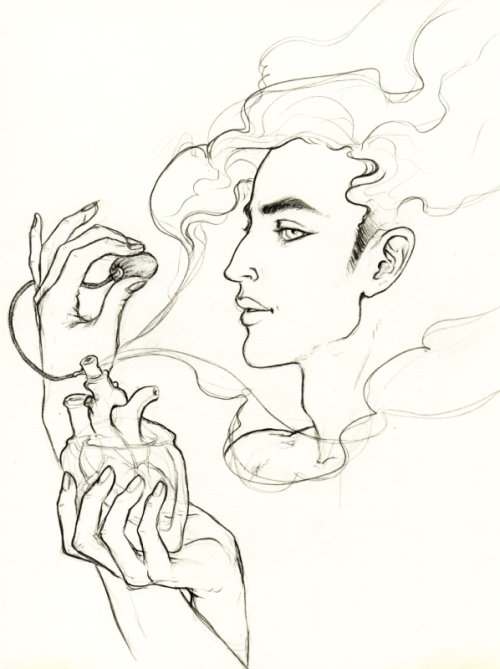 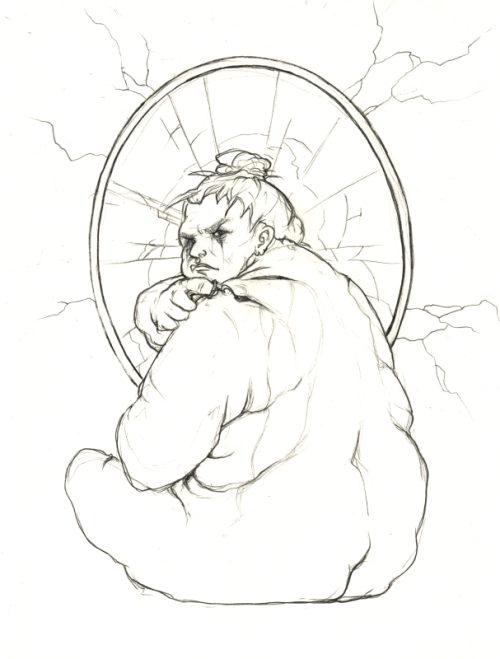 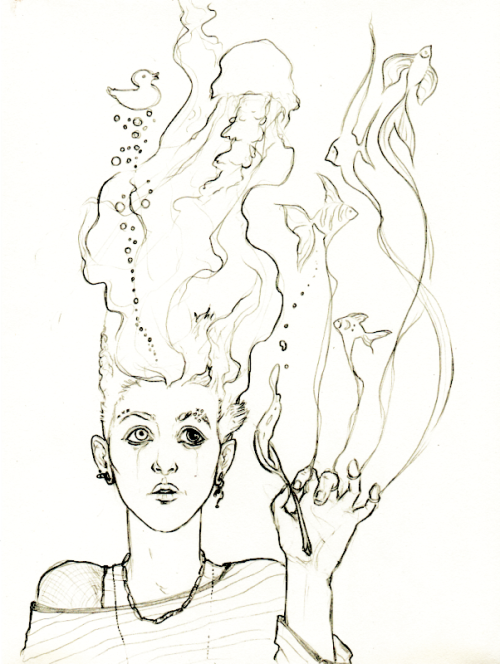