Pokemon sona!!!! their name is Bubbles and their pronouns are they/them! theyre a surfer boy 🏄‍♂️🏄‍♂️🏄‍♂️

#unfinished, #angst, #give him a fucking hug, #nuzlocke, #dewott
0 notes · See All
3buddyPhoto 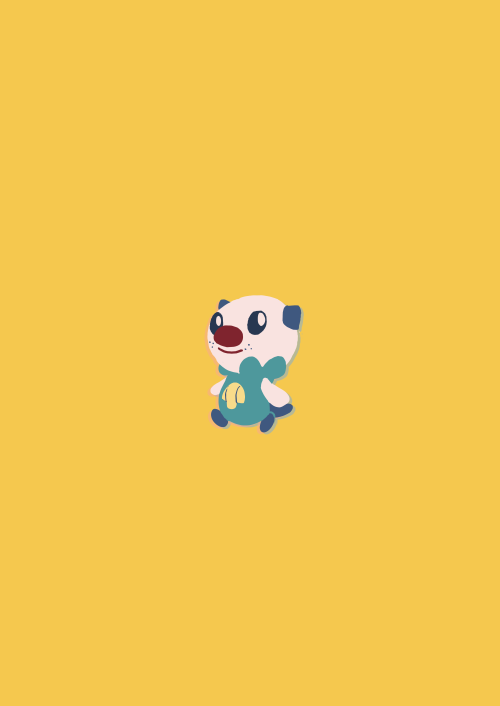 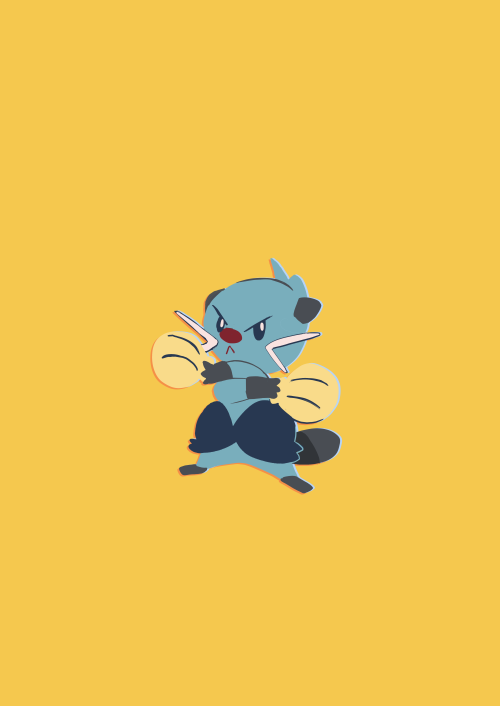 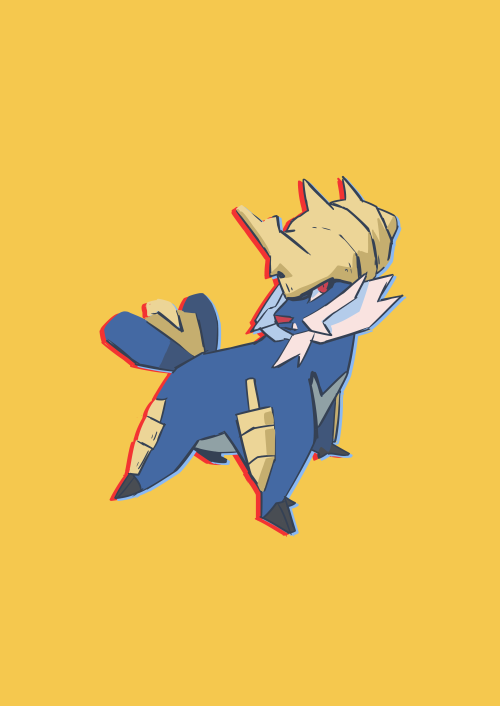 I was browsing the web when I stumble a pic of what appeared to be female Tony the Tiger, I clicked on it and it turned out to be Mrs.Tony. Tony is married. Where did find the pic… 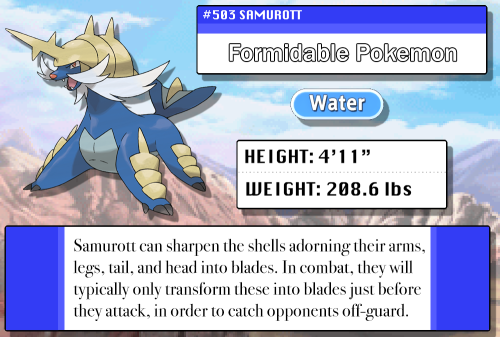 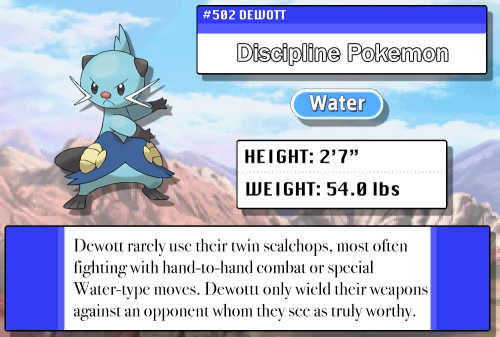 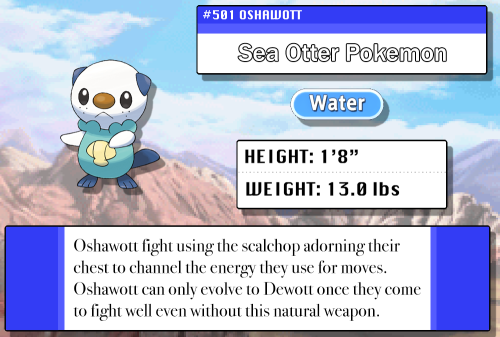 Romeo: Never knew my arm have this many coils.

(Well here it is, The final ask I’ll do here that’s consistent to the story. Time to plan the reboot now.) 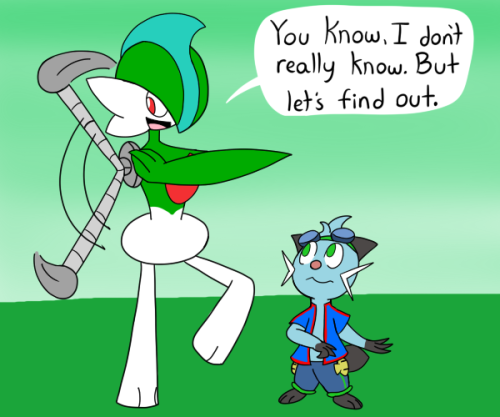 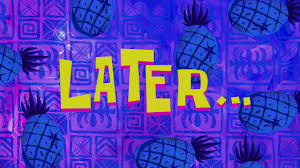 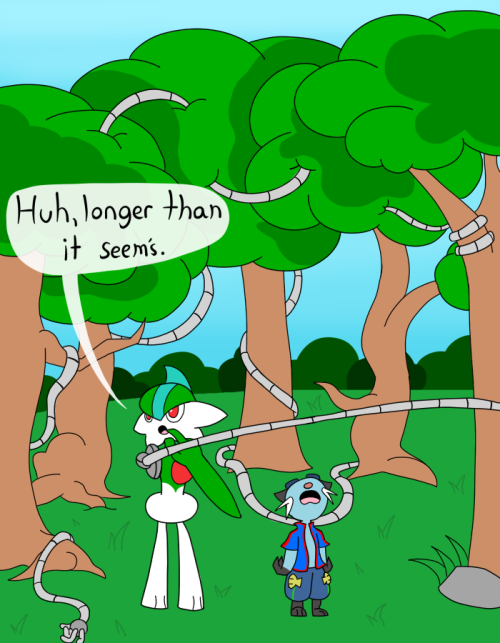 A commission for HiddenSoundTest (on Twitter) and an extra free doodle! 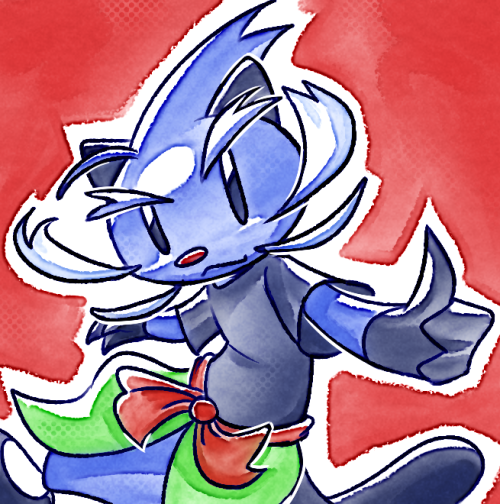 Just an extra page for my nuzlocke comic!

Ziggy was looking around nervously, his eyes darting to and fro, and Sparks could see his paws quivering. He definitely looked nervous, but that was to be expected. Sparks wouldn’t blame him at the moment if he decided to just put the hood back on.

Sparks then lifted his head and took a calmer look at their surroundings. His spirits sank a little when he saw there was already a Pokémon openly staring at Ziggy. It was a Torracat wandering down the other side of the road, whose gait slowed to almost a crawl as he stared at the Buizel. Sparks didn’t condone this behaviour, but as long as the Torracat did nothing further then things would be okay. Dealing with starers was the main point of this exercise.

Luckily, the Torracat’s gaze shifted and he locked eyes with Sparks, who gave him a curt little wave of his paw. Apparently, this seemed to click something in the Fire-Type’s brain enough for him to realize that he was doing something rude, because he immediately averted his gaze from the both of them and continued walking ahead at a brisk pace. There was a quiet little whimper beside him. Sparks turned to look at Ziggy, and saw that the Buizel was frowning heavily and was clutching the fabric of his hoodie tightly from within the pockets.

TL: Looks like we got some candies during this event and I meet new Pokemons during it. ^^

Amber: I got to show everyone I’m the coolest Scorbunny.

Amber: I had fun today, Dewott Boy. But I hope to show off more soon.

TL and Amber has left the Halloween event 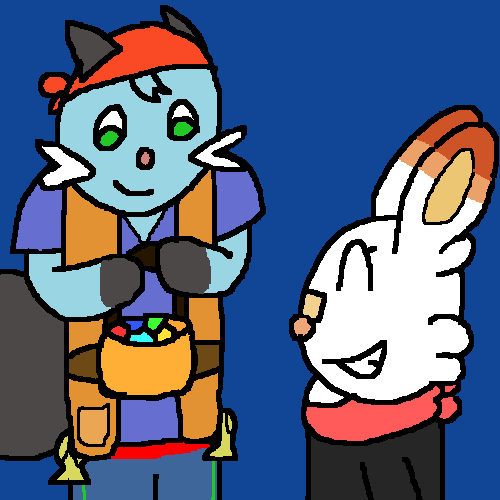 Never Too Old for Halloween 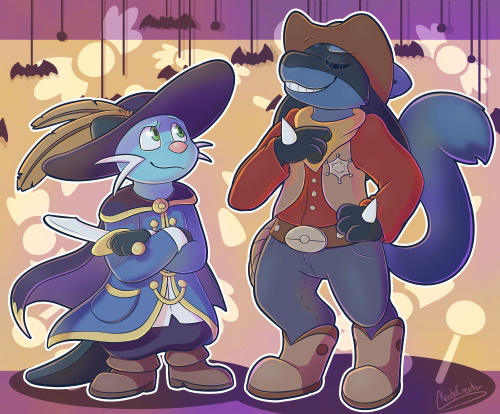 Me and my PokeMMO pokemons.

“Alright alright. Have a good time sweetie, and be safe please.”

“Try to be back before sundown.”

[Joule has gone to meet up with Elliot!] 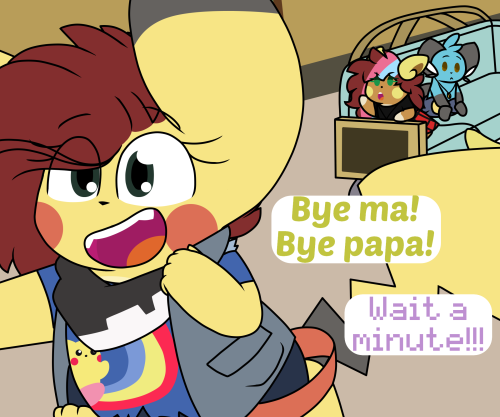 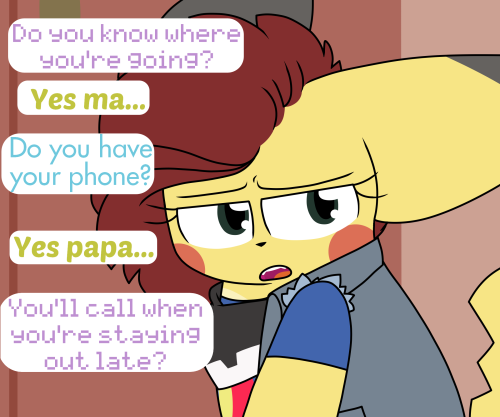 When a friend trades you a pokemon they hatched, and it finally gets over leveled they seem to turn on you! :iconKueivolonte: May need to learn a bit from oshawott before training him more! 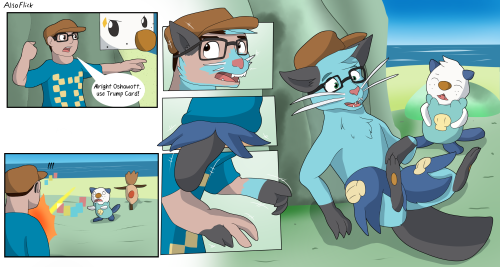 Wanted to draw a Halloween icon for myself

For OCtober 1 we have @gojira007‘s Kazuko… a trainer in the shadow of an older brother who believes she can’t succeed without him holding her hand all the way. 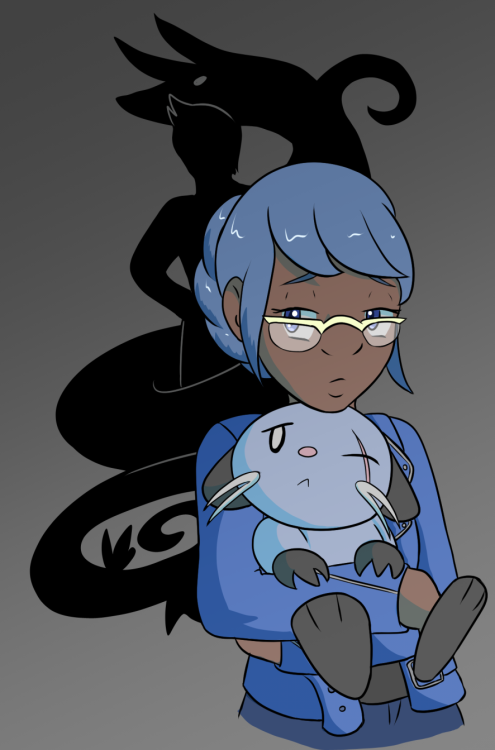 Like Mags, Agnes has become a startlingly popular character of mine, although she had art and concepts preceding her jump in popularity. Initially conceived as an adopted child of Sammy and Melanie, later changes to the roster jostled her role around to being Sam’s slightly younger adopted sister, as well as the twin sister to an unrelated Dewott OC.

Current characterization is as a noted flirt with EXTREME commitment issues, as well as being very skilled with tech, having invented the electric Greatsword that she’s dubbed the Thalesword. She has a natural electric current giving her a latent magnetic field. 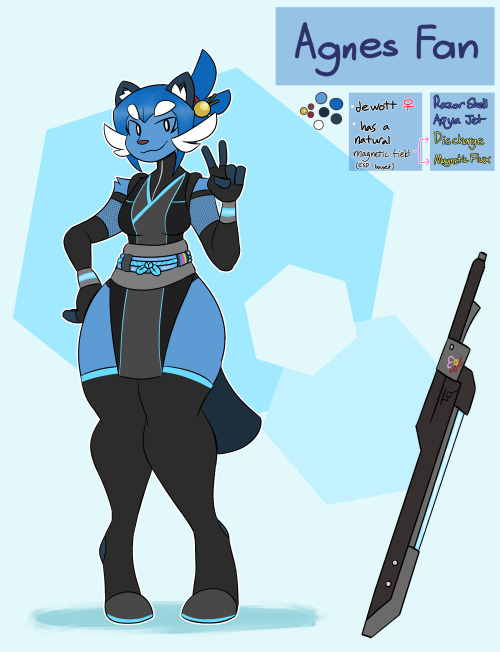 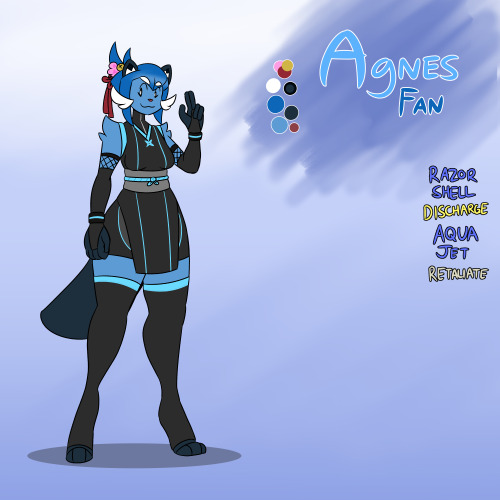 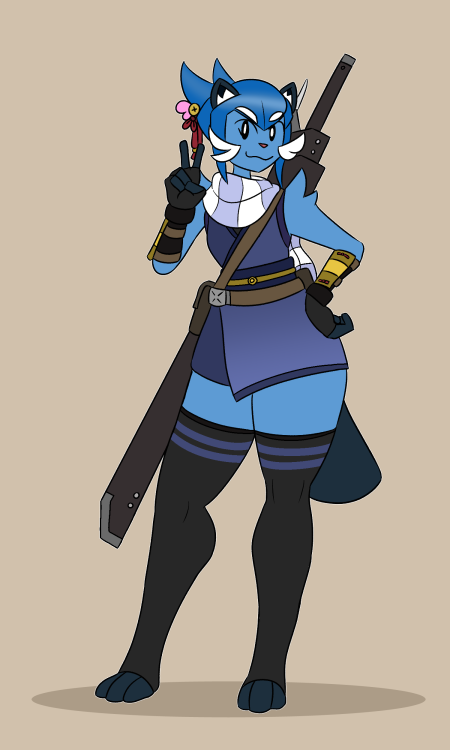 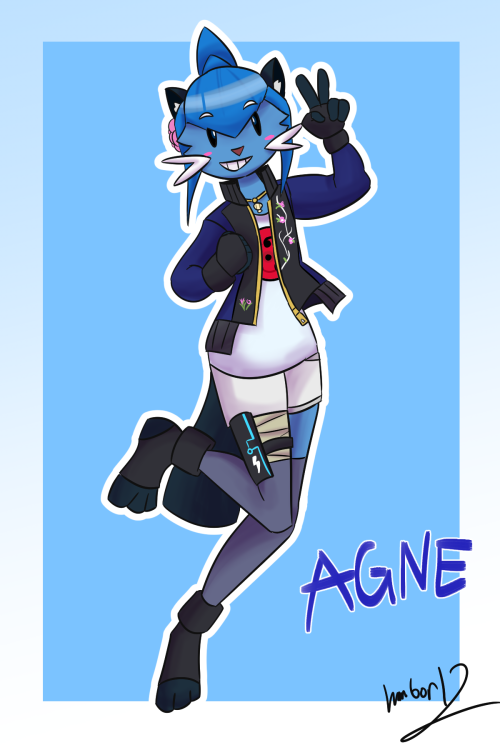 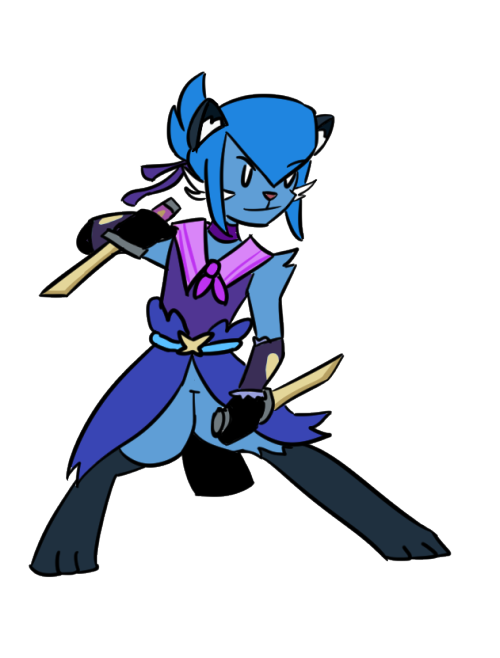 Random reminder that Michelle lived a powered-up Retaliate from Lenora’s Watchog on one HP.

She 100% has a scar from that incident (I think hc’d it on her abdomen?), but I like to connect it to the fact that Hilbert and Michelle bonded almost instantly when they met.

I know the ‘hanging onto life due to love’ mechanic wasn’t a thing until Gen VI, but you can’t convince me that isn’t what happened.

#Michelle;, #a combination of luck and skill (headcanon), #((I literally screamed)), #((both because it did so much and because Michelle lived it on one)), #((no moment is more intense in a Nuz.locke than a Pokemon living on less than 5 HP)), #((using a Dewott icon bc she was a Dewott at this time)), #((I just wanted an excuse to use all these icons I got for her okay??))
2 notes · See All
intomybubbleText

Earlier in the afternoon i was playing my old save of pokemon black 2 earlier so i can self trade my gurdurr and boldore on my new save on white. The only pokemon i had left was a sandslash since i transferred all my pokemon from old saves to X back in like 2014.

I had no flying types so traveling was a pain so i ran over to the desert to catch myself a sigilyph since i couldnt find any pidoves, or whatever, around nimbasa city. After that i flew over to Icirrus city since that was closest to where i could find a litwick and i just wanted one just in case i try breeding pokemon.But to do that i had to pass through twist mountian and i havent played the game for over 5 years so i was just wondering “where the fuck am i??” the entire time i was there hoping i was going the right way. The first path i went was to where regigigas and i was not for that encounter. i did talk to a guy in the cave and got a helix fossil so that was nice

Anyway i traded and evolved my pokemon. Im worried bc im heading towards chargestone cave next and i know i want to catch and raise tynamo again, and the same for litwick. Right now i have 8 pokemon im training - my tranquill and dewott are currently in my pc and i have to figure out who to swap out before moving on. I also ended up passing on having a leavanny on my team since its super frail (like 6 weaknesses, with flying and fire at x4) and opted for a scolipede instead since i never used one before

Anyway, replaying has been fun. There are a lot of pokemon i like despite people complaining about the designs (im def getting a vanillish when i can). Though a number of them are rather ugly. Reexploring the region has been really fun, and i missed farming audino for exp. Oh! When running around and hatching eggs by the daycare center, the daycare guy will call out to you if he found another egg for you so that’s nice. Though a few features from later games do i miss are

The saddest thing about playing gen 5 again now is that the c-gear is basically useless and the dream world was shut down forever ago so i cant appreciate those features now that i have my ds connected to the internet. Like the white forest or black city after defeating the pokemon league is barren without passing by strangers.

Oh and before i forget here’s my current party

#desiree talks, #i sadly dont know what to nickname my conkeldurr, #my tranquill is named faust, #and dewott is named named masamune, #i blame ikevamp and ikesen for those, #the cottonee was an in-game trade so that was its name already
0 notes · See All
Next Page