Reiji: “You don’t need to praise me like that. I’m well aware I’m accomplished.. But thank you for acknowledging me.”

Ayato: “‘Course I am! That’s what I like to hear, hehe! Oresama is the best! I’m not a useless child.”

Kanato: “Are you implying there are times when I don’t do well?! Tch, I always do well!”

Laito: “Your words of praise are somewhat comforting to me. Continue to keep that kindness, bitch-chan. With such a pure heart like that I’m surprised you haven’t been tainted yet.”

So Iwanted to write a letter for y / n, if you should have one please write it how it should be in the way (if you want) and especially from whom it should be!

heh? Are you kidding or are you stupid? Water will not quench my thirst

Only four hours of sleep? That’s not good.

Try to get eight hours of sleep tonight, okay?

I am not your entertainer. If you want to do something just say so.

She is my and as my daughter I trust her to have taste. I would still invite him to dinner and make myself an own picture of him.

Only the best for my little princess.

// Yes, yes. I’ve heard it in a tiktok lol. I’m more of a metal/rock fan~ also holy moly this has been in my drafts and I thought it posted.

Reiji: “..Do what now? Instead of doing that, I’ll punish you for your profane language.. I’ll see where that takes me.”

Ayato: “I knew you were that type of chichinashi! Go on, keep singing that song for me!”

Kanato: “Wha—?! A doll shouldn’t be speaking so indecently!”

Laito: “Is this what you’re into, bitch-chan? I can get behind that, fufu.”

ー The scene starts in the bathroom

( That basically means they were turned from humans into Vampires, right? )

( I don’t know why they became Vampires but…Knowing that they were once human, a lot of things make sense now. )

( I wonder if that’s why they eat regular food besides sucking blood as well. )

( Come to think of it, the Sakamaki’s were different from humans in a various ways… )

( Compared to that, the guys here are still… )

Though the pic still needs some tweaking, its a good wip to show what is to come. Fandom scene redraws!

Where the characters are completely redrawn and an additional character will be drawn in in the same manner!

The bases can be turned into either gender through means of adding / removing boobage, and prices will vary per edit.

For example:
The Diabolik Lovers one at the top will be 15USD
The Persona 5 one at the bottom will be 35USD

Though these are almost done and don’t have official posts yet, they can be commissioned in advance!

You ask me about my self after you left me thirsty?

What birth defects were you born with?

CW: Talks of depression, death of a friend.

Interesting! I think Shu wanted to be human as a child, so that feeling would probably grow. There was a scene in his manga where he was a bit down about having to use his vampire powers to protect Yuma from wolves. Shu wanted to cultivate his own strengths and not use what was handed to him. I’m sure it made him feel useless that all he could do was use what was handed to him. He found more value in the human world than he did in the vampire world. He was always seen to be sad at home. So much so that he ran away.

Shu loved spending his time in the human world learning about practical things more than studying all day to become king. As a child Shu found family politics to be useless. He wasn’t happy constantly studying. He wanted to go out and adventure the world in a hands on way.

Even with Edgar alive, Shu would still get burnt out. I don’t think he would be as distant and detached as he is now, but he definitely would be disinterested in life. Overworking children never turns out good. There would be a breaking point for him. If it were up to him he’d end up running away for good to live with Edgar where he was most happy and content. His mother would never allow that though, so Shu would be stuck inside those suffocating castle walls. There would be a large period of time where he was super depressed, but he would have Edgar to escape to. His problems wouldn’t disappear but he would have a healthy outlet / relationship to keep him stable.

If Edgar had never died Shu’s anxiety around emotional attachment would lessen. He’d be able to form connections with a person easier. Shu would be more trusting toward the world. His compassionate side would show more than his coldness caused by Edgar’s death. Shu is a caring person who always looks out for others. In the manga he rushed over to protect Yui from fallen books, so it’s safe to say he has the capacity to worry for others.

After Edgar died he pushed away everyone because he didn’t want them to get hurt. He decided it would be best to not make himself or others vulnerable like that ever again. Without the weight of feeling like he destroys everything he touches, he would be able to peruse his passions. I picture him striving to become a great musician. Shu is a smart guy, so his academic work would be better as well. He’d get involved with human life more, and learn to value their lives instead of treating them like prey. In the Shu we know and love, he knows deep down that humans aren’t just prey. He wouldn’t be as exhausted as he is from his overbearing depression. He’d deal with his depression in a productive way instead of sleeping through the day.

TLDR; He would still have a depressive episode, but he would be able to better recover from it with the help and support of Edgar.

// Not sure exactly what you were wanting (reaction, Headcanons, etc), so I did some reactions.

Shu: “Mhh.. A demon slayer? At least you’ll be able to protect yourself so I can sleep more.”

Reiji: “That might come in use when I need specific ingredients from the Demon World.”

Ayato: “How many have ya killed? Are you a high ranked slayer?”

Kanato: “Please make use of that skill and dispose of any greedy men that look at you.”

Laito: “Hm~ Could you show me your skills? Why haven’t you used them on me? Could it be you actually crave for me~”

Subaru: “You slay demons? ..So ones like me? When the day comes, I’ll be ready.”

hello dear!! i have watched and would recommend these anime’s:

the bolded are anime’s that i didn’t finish or finished but didn’t like! that doesn’t mean they weren’t good! they just weren’t my thing!

- Whenever someone tries to listen to him play his violin. He gets sassy about playing in front of people.

- Shu gets annoyed when people constantly talk to him despite enjoying someone filling the silence. If it’s his s/o this is the case especially.

- Any time you’re around him he’ll be sassy. Degrading and throwing insults left and right. He just wants people he cares about to do the best they can.

- He’s a bit of a tsundere when people try to take interest in his work. Not many have genuinely wanted to see his work, so he’s not used to someone asking.

- When people actually try to make a move on him. He’ll get defensive and creeped out if someone’s super straight forward. He’ll end up easing into it and become prideful.

- If you don’t like his food! He’s always enjoying food, and if someone trash talks his food he’ll get annoyed. He’ll try his best to get you to like it.

- When you try to talk, touch, or look at his Teddy. He doesn’t want Teddy to be spoken to or even perceived without his say so.

- He hates when people are overly familiar with him. Let him come to you, and don’t approach him.

- When girls are super feisty he gets annoyed. If you’re overly resistant he’ll get upset, but return back to his usual flirty self soon after. He likes girls to be feisty, but don’t over do it.

- If someone tries to flirt with a girl he has his eyes on. He hates it when another guy tries to steal his girl.

- When you’re kind to him he gets nervous and irritable. He’s learning to be receptive to genuine kindness without being mean in return. To him kindness is a person being deceptive.

- If someone points out his soft side. He gets teased a lot by his brothers, so if they’re around and you mention something soft hearted he did he’ll get upset.

ー The scene starts in the hallway

Yui: ( Quite some time has passed since I came here but…This place is kind of odd, isn’t it? )

( It’s also a Vampire’s manor, but compared to my time at the Sakamaki’s, it’s different in more than just one way… )

Being a sacrificial bride was a fucking wild ride lmfao. 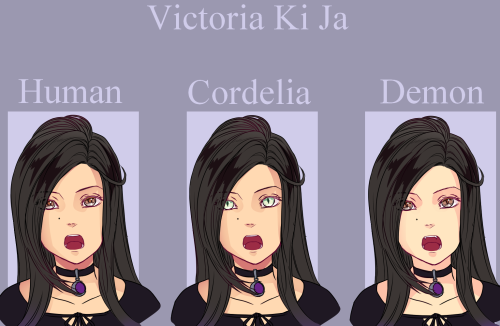