Dick: We need a laugh that says ‘ Yes, you are a smart and strong competitor, but we are also strong and smart and we have a reasonable chance at beating you. ‘

Bruce: How exactly would that laugh go?

Jason: That sounds more like ‘ we are a tall thin woman who wants to make a coat out of your Dalmatians. ‘

“the polaroids have taken by nearly everyone at the Wayne Manor, ”

if you guys would want me to make the girls and Dami, comment below;

God I love this movie, it’s like a fever dream. 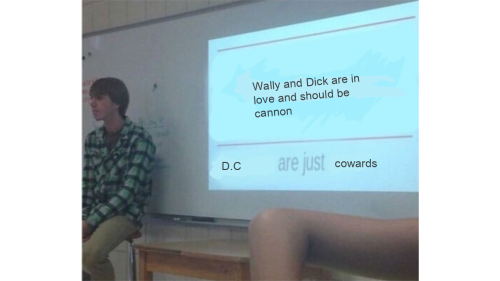 and robin is always there to pour salt in the wound 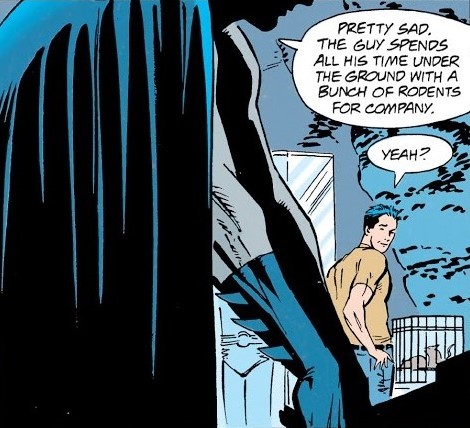 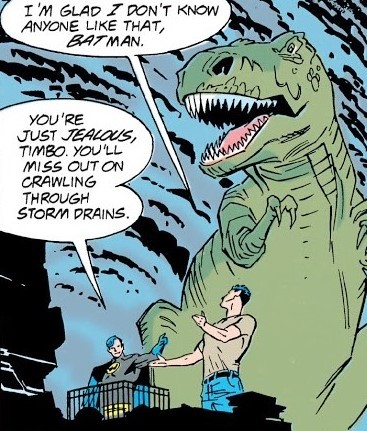 AN: I interrupt my cop show posting to bring you a little DC. This is brought to you thanks to this post.

It’s supposed to be a fabulous night. Your best friend is getting married and you’re the matron of honor. Your dress is actually fabulous, and your husband looks hot as hell in a suit. Dick actually grins when you tell him that. His hands settle on your waist, and he pulls you to him, “You, Mrs. Grayson, are wonderful for my ego.” he kisses you then. His lips press softly against yours, before he adds more force. Your arms wind around his neck, and he nibbles on your bottom lip.

You yelp, when Dick’s teeth bite your lip a little too hard at the yell. Your husband is immediately on edge, ready to spring into action, “What’s wrong?”

That’s when Damian comes out of his bedroom, dressed in full robin gear, katana and all. He looks at Dick as though he’s stupid, “We have patrol.”

You shoot a glare at your brother-in-law, and Dick sighs, “No we don’t, we have a wedding to go to. Go get ready.”

“Y/n’s best friend is getting married?  She’s matron of honor? We told you about this three weeks ago? We got you a new tux? I told you to start getting ready an hour ago!”

Damian just crosses his arms and stares at the two of you, “I was assuming you were joking.”

Dick is completely exasperated at this point, “Why would I joke about attending a wedding?”

“Y/n’s pregnant.” He says it like it’s the most obvious thing in the world. It isn’t, and you’re not.

Your husband’s eyes go wide, and his head snaps to you, “Are you really?”

“Really? You’ve been rather sluggish lately, you’ve complained about your back hurting, you’ve been eating constantly. And I haven’t seen any feminine products in the trash in over a month.”

You freeze, and start to panic, “Dick, do something.”

“On it. Damian, go change into you tux now!”

Your eyes are wide, as Damian stomps back to his room to change, “When does Bruce get back from his mission.”

There’s a moment of silence before you say, “You don’t really think I’m …”

Damian is ready ten minutes later, but it takes you half an hour to convince him to leave the katana at home. He’s moody for the entire wedding. And when your friend promises to never love another man as long as she lives, you can see Dick clamp a hand over Damian’s mouth.

At the reception he’s snarky and rude, and when a woman pinches his cheeks and tells him how adorable he is, Dick has to hold him back. It’s only once Damian is in a debate about something, that Dick drags you out of the ballroom and to the bathroom. It’s there he shows you the pregnancy test.

“Do we? We already have Damian, I don’t know that we can handle a baby.”

“Look! We all have demons, Damian just happens to be mine.”

You laugh, “He’s your brother.”

“And I love him, but he is not a normal kid. He’s out there arguing stock options with a trader and winning. With any amount of luck if you are pregnant our kid will be blissfully normal.”

“How do you figure that.”

“Because the universe isn’t that cruel, and I have to believe that. It’s already handed me Jason, who kills people, Tim who will go a week without sleep, and actually growls if you try to keep him from caffeine, and Damian who we’ve already discussed. On top of that I’ve been fighting crime since I was eight, and don’t get me started on Bruce. The universe owes me.”

You take the test and when you’re done the two of you wait. When the timer goes off, Dick is the one to check. He just turns to you and says, “If we repeatedly say normal kid, and put that out into the universe, we might have a chance.”

Before you can say anything, Damian sticks his head into the bathroom. His eyes find the test immediately, “So I was right?” You nod, and he smiles. And it’s a genuine smile too, “Excellent, I believe I will make a wonderful uncle. At the very least, I can make sure the child gets into top schools… even if it’s dumb. Money does wonders that way. Can we go now?”

Your brother-in-law books it to the car while you and Dick just stand there. “Was it me or was he actually being his version of sweet?”

“Maybe the universe heard us?”

The boy is young for a Grandmaster. Round-cheeked and supple-skinned, he can’t be any older than sixteen. Bruce recognizes his face, remembers seeing him as a small child clinging to Jack Drake’s knee when he and his wife were alive to attend galas. The two spent more time abroad than they did in Gotham but there were a few events they always made time to return for. Like the Museum of Antiquities Annual Fundraiser. Jack and Janet’s boy had turned up for it last week, unaccompanied and genial enough, if mostly quiet and reserved; he’d kept to private corners, clearly wishing to be elsewhere. Brucie made idle conversation, spoke about overdue appearances and asked shallow questions before excusing himself to the company of two laughing supermodels.

Timothy, his name is Timothy.

Tags: Gen, AU- Canon Divergence, Dick Grayson Needs A Hug, Dick Grayson Is A Talon, Darker Timothy Drake, Grandmaster Timothy Drake, Bruce Wayne Is A Good Parent, The Court of Owls Says Hi, Bruce Should’ve Said Swiper No Swiping, Timmy’s A Little Funny In The Head, It’s Ok We Love Him For It, Jason Todd Is Shrike, Bc He Like The Stab Stab

Tim:When did you realize your friendship with Barbara was more than friendship and that you had a crush on her?

Dick: Well I guess it started when she pounced on me in the closet at my 14th birthday….that was our first kiss

Dick: Yeah, after I started noticing little things about her that I didn’t before and found them pretty or cute. But I contributed that to hormones and the fact that she was the only girl I had kissed at the time so I ignored it.

Tim: Okay…so when was the realization of. I want Barbara to be my girlfriend and not just a friend?

Dick: We were 18 and sparring in the cave. I had her in a choke hold of course I was giving her smart Alec talk like I do- I thought I had her defeated. *sighs blissfully* she came back with a surprise attack, threw me down on the mat, pressed her foot to my chest before straddling me. Then kissed me. She got up and walked away acting like it was nothing

Tim:That…that was when you knew?

Dick: What can I say I like a women who makes the first move

Headcannons About The Chaos That Ensues During Nighttime At Wayne Manor: 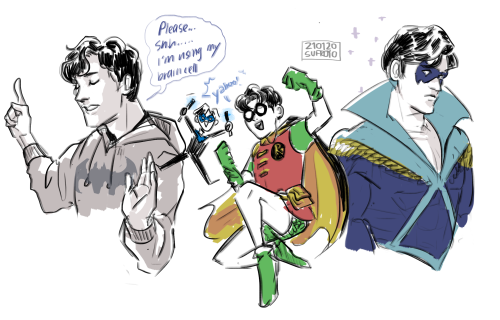 Jason: who the fuck do you think you’re calling a bitch, you ass

Bruce: what the fuck

Dick: Jason Todd, always has to be on top

Tim: *spits out coffee and starts laughing in the corner of the room*

Remember the Gordon-Grayson family I did a couple of weeks ago… I couldn’t resist and draw the kids in domestic situations (kind of?) I imagined as a serie named summer at Wayne manor 😅. I have more doodles of the sibling having fun that I will upload later.

I imagine the oldest like dick with his hair and eye colour, but with Babs freckles. I named her mari-ann but I’m not 100% sure. She is 7 (maybe I will change it later).

The second child is John (but as I said before I’m not completely sure, I like Alfie in honour of alfred) he has brownish hair (like a mix of both Dick’s and Bab’s colour) and green eyes like Barbara. And he is 5

And finally we have the youngest of the family, Bryce (she was originally named Mari-ann, but guess what, I change it like I will probably do with this one) she has Bab’s hair and Dick’s eyes. She is 1 year old.

The second image they are playing on the mud on Alfred’s flowers! 🙊🙊🙊😅