I’m about to do something really dumb of me so stay with me.

I’ll be drawing responses as the characters.

I’ll start off easy with the few I can draw

Ft the concept art and the prototype

“Okay.” Jonathan said before turning back to the other kid behind him.

“You know that line sounds familiar, but I have a feeling that I, Dio will understand it.” 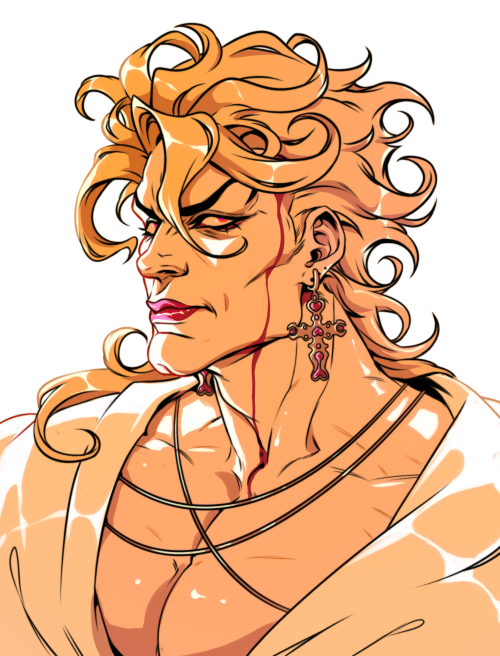 There’s another reference here, from a JJBA light novel. Can you guess?

He was no different than his pathetic excuse of a father.

Dario would work his wife to the brink of collapse.

One day she really did collapse and passed away, Dio really couldn’t understand her.

[Name] wasn’t doing it for him, the [hair colour]-haired girl was doing it because she needed to.

In a way, Dio was making her work, even if it was indirectly.

Those were his mother’s words.

And as a child, the Brando found them foolish.

A bit of a scribble of Dio dressed for fall! I honestly love how he looks in a turtleneck and coat (I love how he always looks even in his horrible outfits but I’ll hush)

But yeah, a few more weeks and I’ll be on winter break, which should mean more Dio! Yay! 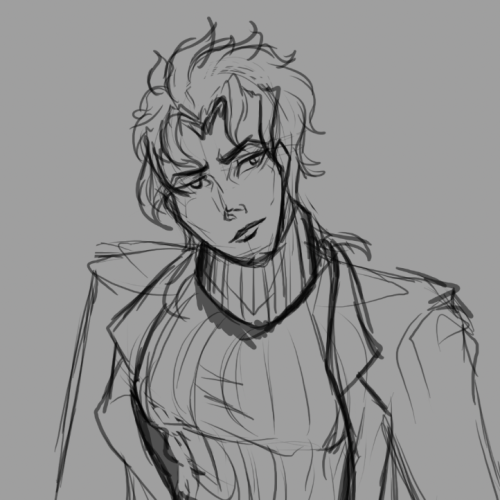 Giorgia heard someone behind her, she turned around to greet them and came face to face with a familiar tall blond man who see saw only in her nightmares and never met him before in her life until now. The beanie wearing girl kept a smiley face but she internally screamed “Greetings Sir, my name is Giorgia! What is your name?” she said politely.

#if you read Giorgia's story in the pinned post she has the memories of the Joestars, #this is how she knows him, #dio brando, #dong castle, #giorgia mcjohan, #interaction
2 notes · See All
obito-uchiha-lovePhoto 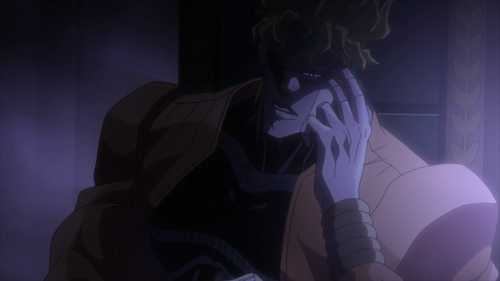 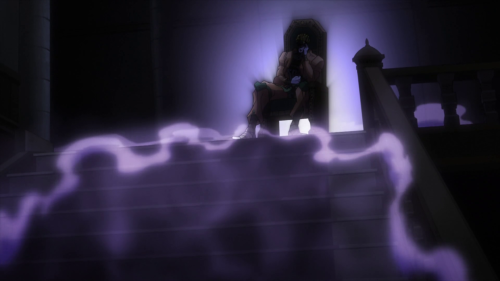 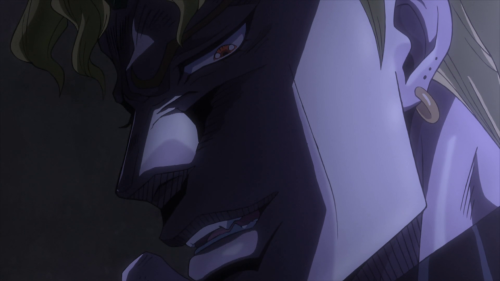 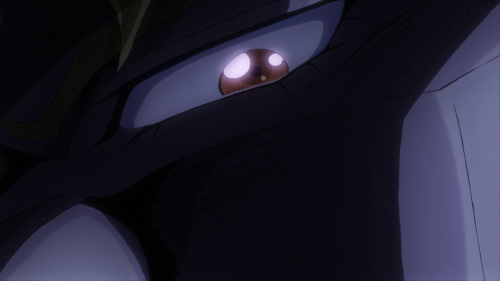 Of course [Name] had passed out due to the lass overworking herself, it was more than obvious to the blond vampire.

Dio caught her on his arms, ignoring her smelly breath.

“Ugh, it does not even smell like something decent, it likely was cheap booze since she claimed she is trying to save money.”

It reminded Dio of his past, something he would rather forget or act like it never happened.

But as much as he wanted to, it was part of him and his childhood.

(Sorry it took so long. Life got hectic)

So their Stands obsess over a tomboy s/o who is a werewolf. The s/o saved them once, but doesn’t reciprocate their feelings because the character in question stalks them. Or does, but doesn’t want their friends to see. I think that’s what you’re saying, sorry if I got it wrong but this is what I’m going with.

Also, sorry, but I don’t know how to write for Johnny, Josuke8, Kira, and Kars so I won’t be including them. And since Jonathan and Speedwagon exist in parts that don’t have Stands, we’ll skip the Stands liking the teen part.

- He finds it amazing that such a young person could jump into a dangerous situation like they did. They are a werewolf and that is startling, but they helped him and he can recognize that they aren’t a threat to him.

- Of course he attempts to find them afterwards. It’s his duty as a gentleman to properly thank them and see if he can return the favor. He is also curious about their power, hoping to inquire about it.

- If the teen’s friends are suspicious of him, he would speak openly with them. He doesn’t want to hurt or scare anyone. Hopefully they could understand that and he would do whatever he can to prove it.

- Speedwagon is used to fending for himself, but being saved by someone, and especially someone so young, was nice, but that fact that they turned into a werewolf, freaks him out.

- He still tries to find them afterwards. He is scared out of his mind, but at the same time, feels the need to at least thank the teen for their help.

- He can understand the teen’s friends’ concern about him. He is a random thug from Orge Street. If they know about their friend’s power, then it’s even more understandable they’d be protective. As long as he can repay the teen for their assistance, then he’ll leave and never return.

- DIO would be intrigued by The World showing interest in anything. He stalks the teen, trying to see why his Stand reacts so strangely around them.

- He would never need to be saved, but the teen may think he needs help and change into a werewolf to assist him. Instantly, he understands why his Stand was so interested in them.

- He approaches them with confidence, convincing them to be on his side. He doesn’t treat them differently than any of his other servants, though maybe if the relationship takes a romantic turn, he’ll have a little favoritism.

- DIO isn’t gonna care about the teen’s friends. If they have a problem, he’ll just kill them. Nobody is going to stop him from getting what he wants.

- Hermit Purple would probably be literally tying him to a teenager. He’s confused for sure but he’s not against trying to get to know this kid. His Stand literally forcing him to be near them has to mean something, right?

- Being saved by them as a werewolf, he’s momentarily surprised but he does get over the initial shock fast. Heck, he knows vampires exist, why not werewolves?

- He talks to them, getting to know them well. He grows to really like them and keeps wanting to spend time with them. It would probably be similar to what happens between Joseph and Tomoko.

- He can kind of understand why his s/o’s friends would be against him being around their friend, especially if the relationship is at all romantic. An older man with a teenager is not socially acceptable. Still, he’d hang around his s/o and if he has to interact with their friends, he’ll turn on the charm to try to get them to like him.

- Star Platinum coming out on its own and hanging around some random teen is really annoying to Joot. He’d put up with it for only a short while before he’d directly talk to the person to see why Star is being so clingy to them.

- When he’s protected by that teen, now a werewolf, he figures that’s why his Stand was so interested in them. Since they helped him in a fight, he also guesses that they aren’t a threat to him so maybe he doesn’t have to worry about them.

- Since Star would still be wanting to be near the other teen, Jotaro would hang out with them to get his Stand to stop being irritating. He finds that he does enjoy the other teen’s company, however, so it becomes less about Star’s attachment and more about Joot’s.

- The s/o’s friends would probably be against Jotaro’s delinquent and rude nature. Sure he’s handsome, but he’s a dangerous asshole. Jotaro doesn’t care about them though; he’s never been one to care about others’ opinions of him. He’ll keep hanging out with his s/o if he wants to.

- Hierophant Green is Kakyoin’s best friend essentially. It probably never showed interest in anyone other than Kakyoin himself, so when it starts trying to get to this other teen, it peaks his interest greatly.

- When that teen then becomes a werewolf to save him, he’s intrigued. Was that their Stand’s ability or something else? He understands why his Hierophant was so attached to them; there’s a lot to learn.

- He’s definitely a little shy about asking them about their werewolf condition once he talks to them. He’s not sure if it’s a sensitive topic, but he’s fascinated by everything they say. He really likes them and hopes they can be close.

- He’ll be a little sad if his s/o’s friends don’t like him. He isn’t trying to be creepy, but since he was a loner in his past, he may have been called that before. It’s hurtful and he’d try his best to change their opinion of him so they don’t try to keep him away from the person he likes so much.

- He has no idea what to make of Crazy Diamond being clingy about another teenager, but it makes him super curious. He spys on them with Okuyasu for a while, probably getting reprimanded by Koichi for being creeps.

- Josuke had seen a lot of stuff in the summer of 1999, but nothing quite like a werewolf coming out of nowhere to save him. So those really exist? Well, he already knew aliens existed because of Mikitaka so he accepted a werewolf somewhat quickly.

- His spying/stalking gets more intense because he’s just insanely curious about this person. He finally gets the chance to talk to them and likes them a lot. He definitely wants to hang out with them more and introduce them to his friends.

- He’d try really hard to get his s/o’s friends to like him. Following the teen around before probably didn’t help him out though; he should have listened to Koichi. Honestly, Josuke is a sweetheart, I think he’d get the teen’s friends to come around.

- Giorno is very curious about why Golden Experience obsesses over this random person. He figures there must be a reason for it so he cautiously follows them around, observing them to see if they might be a threat.

- A scuffle between him and some random thugs isn’t anything new. He can handle it on his own, but the teen he’d been following turned into a werewolf, protected him, and bounded away. He certainly never expected that.

- He finds them soon after that moment, not necessarily interrogating them, but definitely trying to learn everything he can about them. He offers them a position in the mafia; their power would be useful.

- Considering Giorno is the boss of the mafia, the teen’s friends are very fearful for their well-being. They beg them to not take the position and cut ties with Giorno, scared stiff when he appears around their friend often.

- She doesn’t mind her Stand obsessing over the teen because Jolyne likes this kid right away. She appreciates the tomboy style and finds them interesting so she’d like to get to know them.

- Jolyne is certainly surprised when the teen becomes a werewolf and protects her. She assumes it’s their Stand and it only makes her more curious to talk to this person.

- She follows them around, fully intending to talk to them and finding them fascinating and fun to be around.

- However, the s/o’s friends don’t like Jolyne: they think she’s dangerous. If they find out about Jolyne’s criminal record, then they’ll never allow her near the s/o.