Orc on Dire wolf
By Wizkids (Nolzur’s Marvelous Miniatures)
Painted by me :P 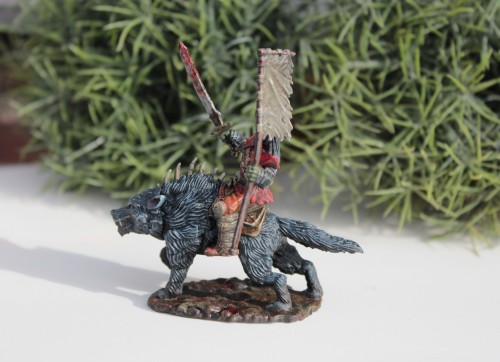 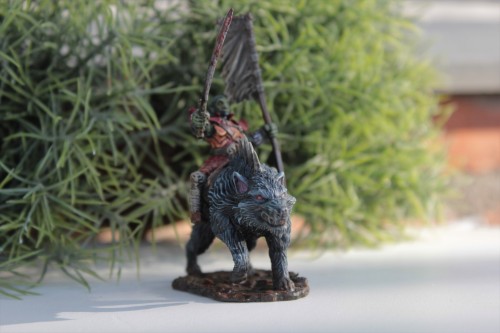 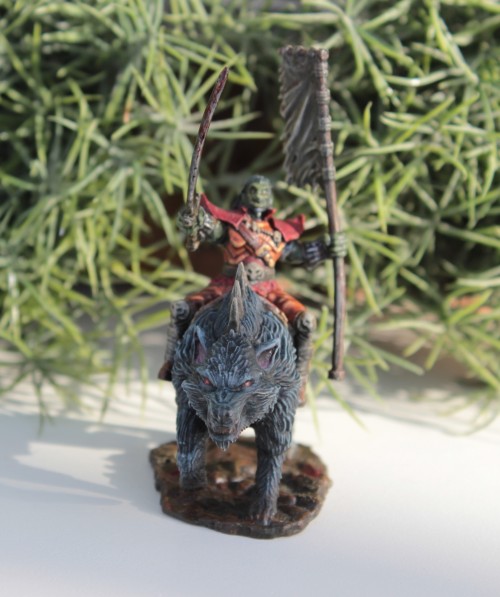 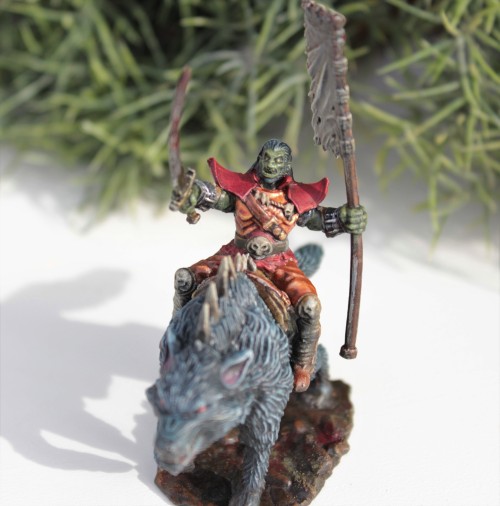 Ghost was curled up asleep beside the door, but he lifted his head at the sound of Jon’s boots. The direwolf’s red eyes were darker than garnets and wiser than men. Jon knelt, scratched his ear, and showed him the pommel of the sword.

Ghost sniffed at his carved stone likeness and tried a lick.

A Game of Thrones, Jon VIII 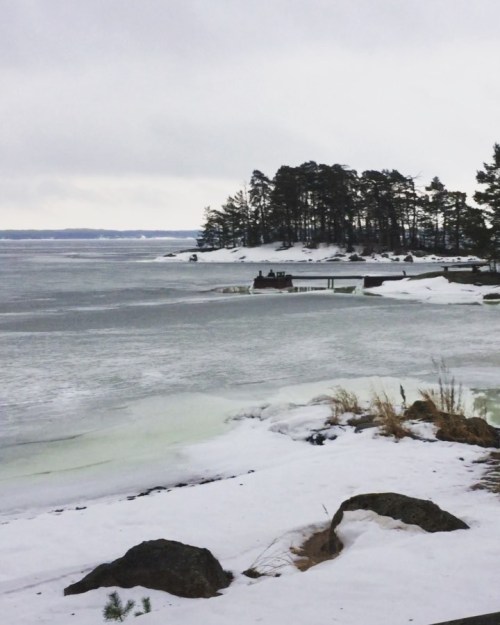 Chops is the lovely Direwolf friend of Novi, whom Novi rides into battle upon. 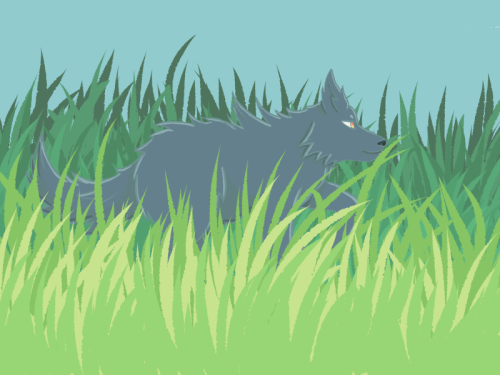 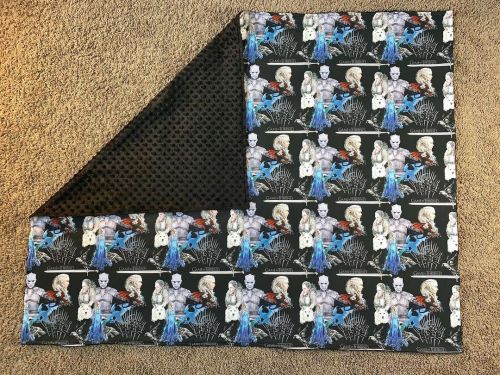 She’s not a dog, she’s a direwolf:

“I’ve never seen an aurochs,” Sansa said, feeding a piece of bacon to Lady under the table. The direwolf took it from her hand, as delicate as a queen.
Septa Mordane sniffed in disapproval. “A noble lady does not feed dogs at her table,” she said, breaking off another piece of comb and letting the honey drip down onto her bread.

“She’s not a dog, she’s a direwolf,” Sansa pointed out as Lady licked her fingers with a rough tongue. “Anyway, Father said we could keep them with us if we want.”

The septa was not appeased. “You’re a good girl, Sansa, but I do vow, when it comes to that creature you’re as willful as your sister Arya.” She scowled. “And where is Arya this morning?“

—A Game of Thrones - Sansa I

Sansa knew the name, and now the courtesies that Septa Mordane had taught her over the years came back to her. “The Lord Commander of the Kingsguard,” she said, “and councillor to Robert our king and to Aerys Targaryen before him. The honor is mine, good knight. Even in the far north, the singers praise the deeds of Barristan the Bold.”

The green knight laughed again. “Barristan the Old, you mean. Don’t flatter him too sweetly, child, he thinks overmuch of himself already.” He smiled at her. “Now, wolf girl, if you can put a name to me as well, then I must concede that you are truly our Hand’s daughter.”

—A Game of Thrones - Sansa I

She (Lady) is of the North

They were all staring at him, but it was Sansa’s look that cut. “She is of the north. She deserves better than a butcher.”

He left the room with his eyes burning and his daughter’s wails echoing in his ears, and found the direwolf pup where they chained her. Ned sat beside her for a while. “Lady,” he said, tasting the name. He had never paid much attention to the names the children had picked, but looking at her now, he knew that Sansa had chosen well. She was the smallest of the litter, the prettiest, the most gentle and trusting. She looked at him with bright golden eyes, and he ruffled her thick grey fur.

When it was over, he said, “Choose four men and have them take the body north. Bury her at Winterfell.”

“All that way?” Jory said, astonished.

“All that way,” Ned affirmed. “The Lannister woman shall never have this skin.”

—A Game of Thrones - Eddard III

She has the blood of a wolf:

“This girl’s to be your queen,” the Imp told Joffrey. “Have you no regard for her honor?”

“For what crime? She did not fight her brother’s battle.”

“She has the blood of a wolf.”

—A Clash of Kings - Sansa III

Wolves are supposed to be brave:

Sansa tried to run, but Cersei’s handmaid caught her before she’d gone a yard. Ser Meryn Trant gave her a look that made her cringe, but Kettleblack touched her almost gently and said, “Do as you’re told, sweetling, it won’t be so bad. Wolves are supposed to be brave, aren’t they?”

Brave. Sansa took a deep breath. I am a Stark, yes, I can be brave. They were all looking at her, the way they had looked at her that day in the yard when Ser Boros Blount had torn her clothes off. It had been the Imp who saved her from a beating that day, the same man who was waiting for her now. He is not so bad as the rest of them, she told herself. “I’ll go.”

—A Storm of Swords - Sansa III

A wolf with big leather wings like a bat:

“I forgot, you’ve been hiding under a rock. The northern girl. Winterfell’s daughter. We heard she killed the king with a spell, and afterward changed into a wolf with big leather wings like a bat, and flew out a tower window. But she left the dwarf behind and Cersei means to have his head.”

—A Storm of Swords - Arya XIII

“That night, alone in his tower cell with a blank parchment and a cup of wine, Tyrion found himself thinking of his wife. Not Sansa; his first wife, Tysha. The whore wife, not the wolf wife.”

—A Storm of Swords - Tyrion IX

“The dwarf’s wife did the murder with him,” swore an archer in Lord Rowan’s livery. “Afterward, she vanished from the hall in a puff of brimstone, and a ghostly direwolf was seen prowling the Red Keep, blood dripping from his jaws.”

—A Storm of Swords - Jaime VII

A direwolf, grey and ghastly, spotted with blood, his golden eyes shining sadly through the dark:

The crypts were growing darker. A light has gone out somewhere. “Ygritte?” he whispered. “Forgive me. Please.” But it was only a direwolf, grey and ghastly, spotted with blood, his golden eyes shining sadly through the dark . .

—A Storm of Swords - Jon VIII

“Your Grace has forgotten the Lady Sansa,” said Pycelle.

The queen bristled. “I most certainly have not forgotten that little she-wolf.” She refused to say the girl’s name. “I ought to have shown her to the black cells as the daughter of a traitor, but instead I made her part of mine own household. She shared my hearth and hall, played with my own children. I fed her, dressed her, tried to make her a little less ignorant about the world, and how did she repay me for my kindness? She helped murder my son.

—A Feast for Crows - Cersei IV 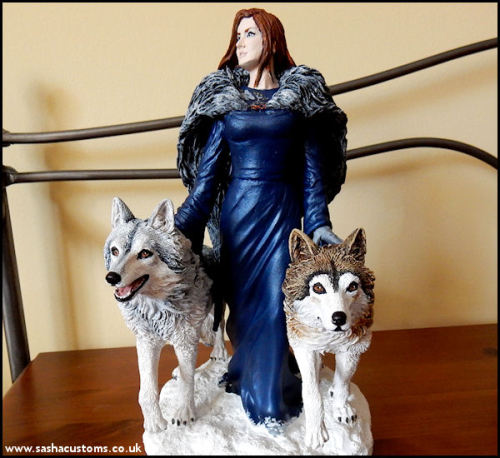 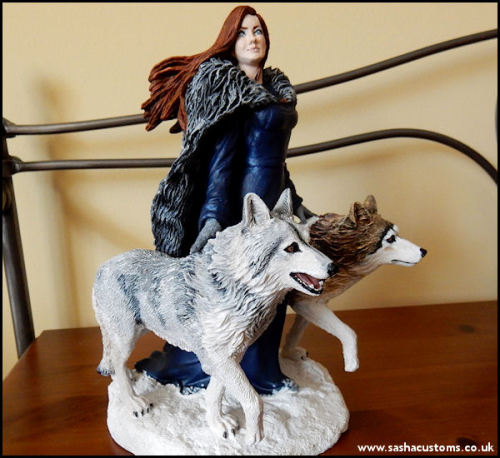 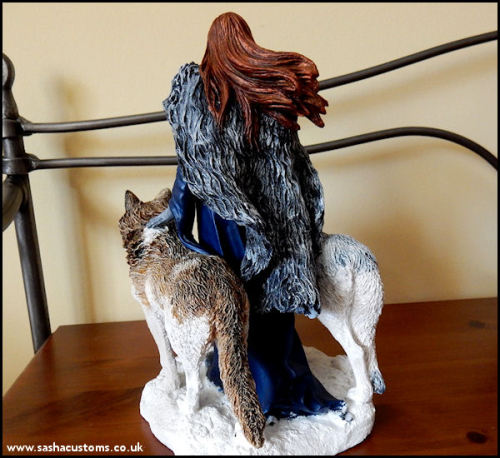 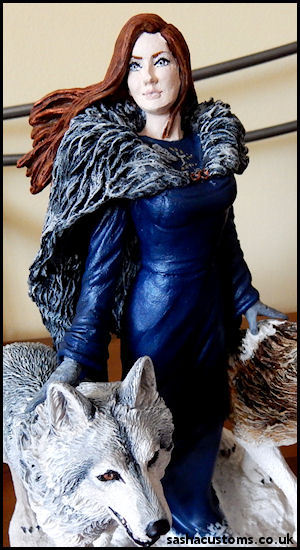 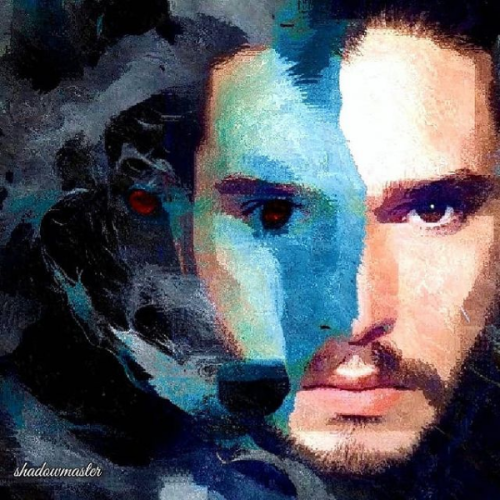 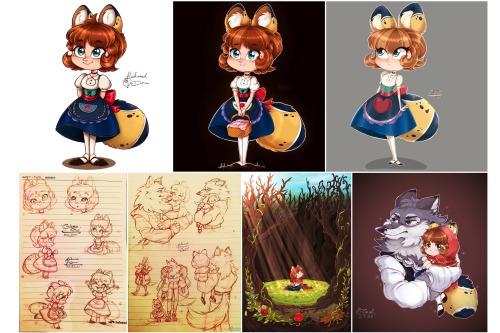 Some pics I did recently featuring my werewolf girl, Mona! As well as her girlfriend, June. AKA, the hero “Remix”~ 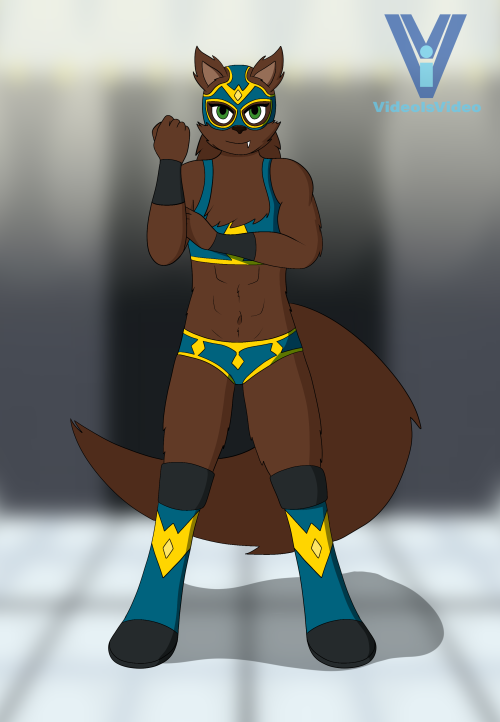 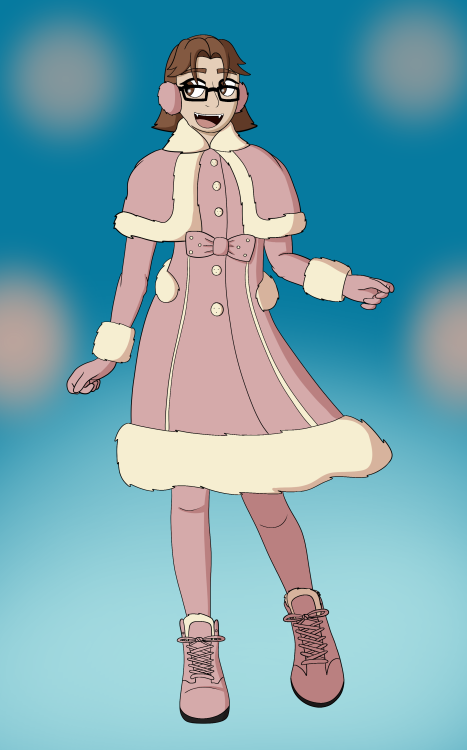 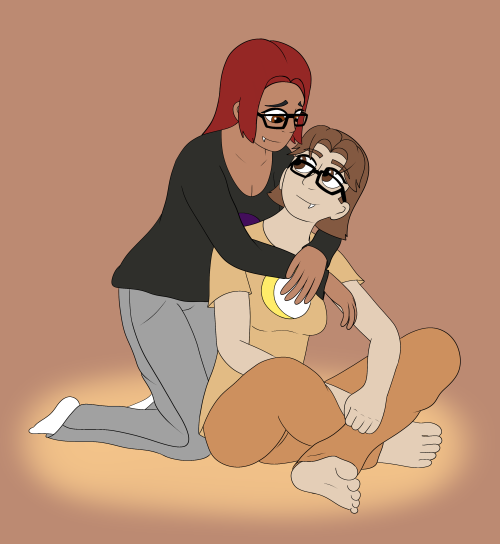 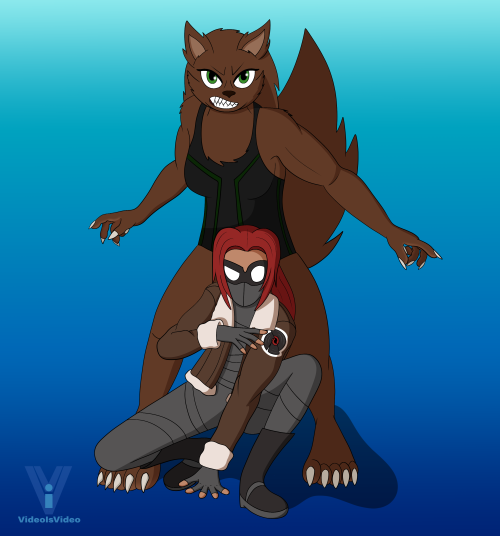 A Clash of Kings - Cache

A soft scrabbling noise made him turn. Jon moved toward the sound, stepping carefully among boulders and thornbushes. Behind a fallen tree, he came on Ghost again. The direwolf was digging furiously, kicking up dirt.

Ghost leads Jon Snow to the cache of dragon glass. Ghost’s behavior leads a lot to teh theory that he’s being warged by Bloodraven. This was a fun one to do working with the contrast between Ghost’s albinism and the dark of night. Though Jon’s black clothing made this a challenge as well. 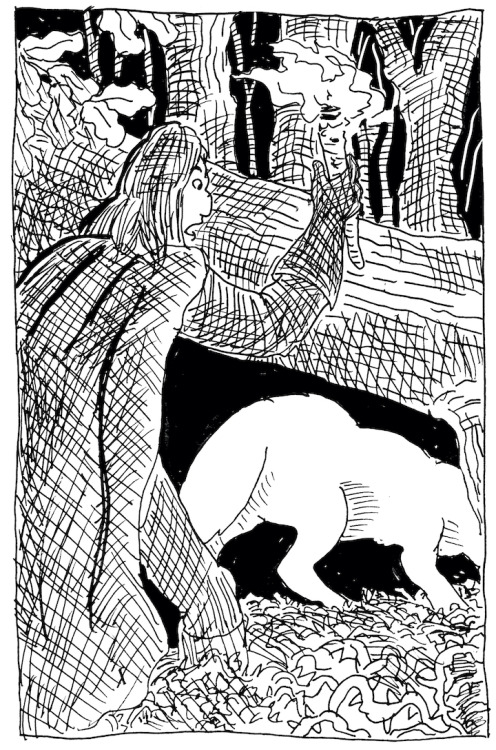 Archive of Our Own

This first chapter is a prologue of sorts, it takes place well after the book and show events begin. As a teaser we will follow from A Game of Thrones / Season One in the next chapter going forward.

A Clash of Kings - Sparring

Meera moved in a wary circle, her net dangling loose in her left hand, the slender three-pronged frog spear poised in her right. Summer followed her with his golden eyes, turning, his tail held stiff and tall. Watching, watching …

For good scenes in the latest Bran chapter, I had two choices. It was either Meera sparring with Summer or climbing a tree with her brother to escape Summer and Shaggydog. But I’m not passing up the chance to draw Meera looking badass. 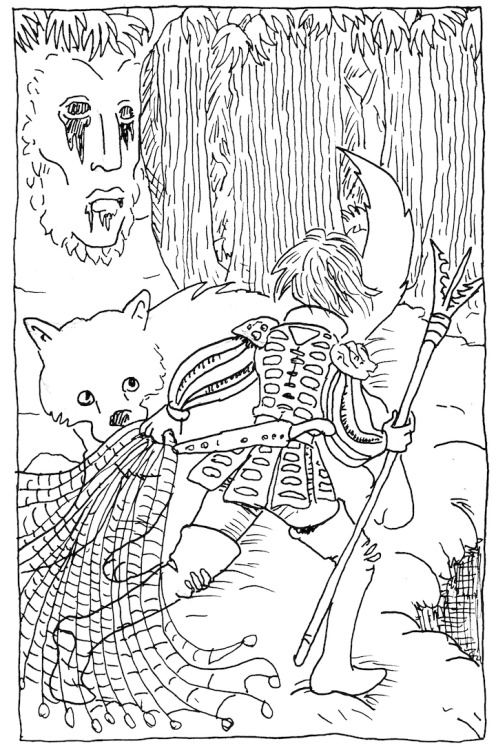 Last complete drawing of 2020. Was gonna do a best of, but I’ve only been drawing for 3 months so it seems kinda stupid.