Mal: Dad is having a mid-life crisis, and I’m just having a crisis.

Two shadowy figures hurried through the night, leaving behind the brightly lit, lively banquet hall they’d just exited, and made their way across a candlelit cobblestone pathway through the gardens outside. The owner of the first voice lagged behind a few steps, much more cautious with the stolen contraband she was carrying. Whereas her accomplice clearly didn’t have the same worries.

“You’d be moving faster if you wore more sensible heels, E. Or, y’know, a nice pair of flats.”

“Mal, bite your tongue!” she gasped. “Besides, I can run just fine in heels. It’s the cake I’m worried about. One wrong step and suddenly I’m feeding it to the lawn instead of to you. And you need to be more careful, too,” she cautioned.

“Evie, come on,” Mal laughed, slowing down and turning to face her friend. She wasn’t laden with anything but a dinner knife, that she twirled deftly between her fingers almost as if to tease Evie with it. “It doesn’t even matter if I drop the knife. I mean, we can have cake without a knife. If we just had knife without a cake, then what even is the point of all this?”

“And if you stepped on a broken cobblestone and fell over and stabbed yourself, then we’d have to spend all night in the emergency room. And then no one would get cake!” Evie shot back. She only managed to keep her serious composure for about two seconds, before they both dissolved into a fit of giggles. They kept up their playful bickering as they headed further from the party.

With enough space between them and the banquet hall, surrounded by the lush gardens, the two were finally able to have a moment to themselves. They found solace on a bench beneath a blossoming cherry tree. Behind them, they could just barely hear the noises from the party. Music, talking, laughter, all blending together and creating a hum that was much more tolerable now that they weren’t in the middle of it. Ahead, a perfect full moon lit up the sky and reflected off of the clear pond nearby. Fireflies blinked around them, and crickets chirped to add to the white noise effect.

Of the two young women, Evie was without a doubt the party girl. Not in the sense that parties took up the majority of her social calendar, or that she was uncontrollably wild when attending one. Just that she was the bigger fan. Planning them out, getting dressed up, dancing, being surrounded by people - Evie thrived on it all.

Not Mal, though. She was the opposite. Mal, who sometimes seemed allergic to fancy clothes, makeup, or even hair products. Mal, who went into full blown panic mode when faced with too many decisions. Mal, who was much more at ease when surrounded by only two or three close friends at a time. About the only chance someone had of dragging her out to a party was to tell her about the food and drink that would be available. And if that failed, a sweet smile and a bat of the lashes from Evie, and Mal would be agreeing in no time. Even if she regretted her choice later.

Only this time, there wasn’t exactly a choice being made, since the party was basically in Mal’s honor. Of course it was expected she attend. But Evie was nothing if not prepared. When booking the venue, she’d made sure that there would be an escape route if Mal got overwhelmed. A place they could get some quiet, some fresh air, and get away from the crowd. The vast gardens were the perfect place for that.

The escape was premeditated, but stealing the top tier of the cake certainly wasn’t. While Mal was usually the more impulsive of the two, it’d been Evie’s idea to double back while everyone was distracted on the dance floor and sneak the sweet treat for them to share in private. And now she was certainly pleased with her idea. Mal had her peace, she had her partner, and now she had cake. She certainly couldn’t ask for anything more.

“God, I’ve been looking forward to this for so long,” Mal groaned, practically drooling as she cut into the cake.

“Ah, I see. So I’ve just been an afterthought this entire time?” Evie asked, feigning offense.

“Oh, please,” Mal snorted. “As if you’re not at the forefront of my mind 24/7.” She carefully picked up the little square of cake she’d cut, holding it up to Evie’s lips. “See? I’m giving you the first bite. If that’s not proof of how much I love you, I don’t know what is.”

Evie smiled at that, keeping her eyes on Mal as she leaned forward a little and parted her lips. Mal fed her the cake, watching as Evie’s lips closed around the bite and she pulled back, chewing and swallowing it down before a smile spread over her face. “Oh, wow, that is delicious…”

“I knew it would be,” Mal replied proudly, since the cake had been her choice. “Can’t go wrong with strawberry.”

“Definitely not,” Evie agreed, letting Mal have the rest of the first piece and grabbing the knife to cut a square for herself. She looked out over the pond as they ate, taking her time on her piece while Mal scarfed hers down, then got another. When Evie looked back at her, she couldn’t help but laugh at the sight of frosting smeared over Mal’s lips.

“What?” Mal asked through her last mouthful of cake, swallowing before attempting to speak again. “Did I get some on my face?”

“Just a little…” Evie said, reaching up like she was going to wipe it away with her thumb. But she just grabbed Mal’s chin and leaned in for a kiss, playfully licking over her lips to clean up the mess of frosting. Mal smiled at first before the kiss turned more serious, and she reached up to cradle Evie’s jaw and kiss her back. They both just melted into it, holding one another as close as they could while there was still a half eaten cake tier on the bench between them.

They didn’t even hear anyone approach, until someone cleared their throat and startled them both. They broke the kiss and whipped around to see Carlos smirking at them. “Well, well, well. Thought I might find you two out here.”

“What do you want, de Vil?” Mal demanded, a little flustered at being interrupted during such an intimate moment, but trying her best to cover it up.

“Everyone’s wondering where you two went.” Carlos walked closer to the bench, perching himself on the arm. “Jay and I decided to look. He was convinced you’d be off hooking up somewhere,” he chuckled. “We even bet on it.”

“Well if you were a few minutes later, Jay totally would’ve won the bet,” Mal retorted. She plucked one of the strawberry slices off the top of the cake and chucked it at Carlos, who managed to catch it as it bounced off his chest and just popped the fruit in his mouth, grinning at Mal.

“I was gonna say it’s time to go cut the cake, but it looks like you two already did that,” he said, leaning over Evie to swipe his finger through the frosting and get a taste for himself.

“Well, I’m getting out of here before either of you get strawberry goop on my wedding dress,” Evie said, gently pushing Carlos aside so she could stand up.

“Why don’t you go collect on that?” Evie suggested. “Let him know we aren’t fooling around in a janitor’s closet somewhere. We’ll be right behind you.”

Carlos took the hint, as well as the cake and knife, and headed back up along the path to the banquet hall. Mal stayed on the bench just staring straight ahead, until Evie moved to stand in front of her and she glanced up to meet her eyes.

“Yeah, just… give me a sec,” Mal replied, taking in a deep breath and letting it out slowly.

“You know…” Evie said after a moment, a mischievous smirk on her face as she looked down at her new wife. “After the cake, and after the dances, we get to throw our bouquets. You know what that means…”

“We get to watch all the girls rip each other to shreds in the hopes of catching one and being the next bride?”

“What a stupid tradition,” Mal laughed, getting up from the bench. “Let’s go!” 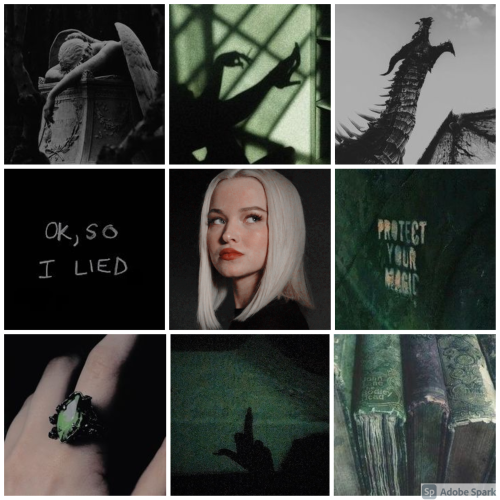 As far as I know, R.O.A.R. and Swords and Shields are the exact same thing, just named differently by different media (books/movies versus some promo magazines). It involves swords (no actual shields, as far as I can remember), mobile walls and crates, and a combination of sword skills and agility skills.

It’s literally just the in-canon explanation for how Jay and Carlos (and Mal and Evie somehow) could match up swordfighting skills with a literal pirate crew.

Anyone else who has anything else to add or elaborate, feel free to add on!

Okay, Audrey and Uma. Who sits on whose lap?

Ben: you’re doing this on purpose, aren’t you?

Jay: I stopped spinning like 15 min ago, honestly I’m surprised you didn’t notice.

In another world, where D3 was about the new villains getting acclimated to Auradon, this is the start of a scene where Audrey discovers that Uma is her new roommate when she walks in and finds Uma sitting on her bed, Harry at her vanity applying her eye makeup, and Gil blatantly offering Uma “treasure” from her jewelry box.

Anyone have anymore Descendants fic prompt ideas?? Send me a ship + a word or sentence starter and I’ll try to write something for you 💖

#descendants#disney descendants#disney’s descendants#carlos de vil#jay son of jafar#rip diego and jade#and diego was literally apart of the anti heroes club clearly he wanted to better himself#but carlos just did not give a fuck ??? 😭#i’d be mad asl#WAIT then there was hadie who’s mal’s half brother#LIKE y’all are AWFUL think about your families 😭😭
3 notes
amityravenclawelf
Text

I just imagined Uma doing a magic girl transformation, like in anime (I have not watched any anime, so I’m going off pop cultural osmosis and my own imagination here.). Instead of her legs turning into tentacles, the tentacles come out of her waist, like a skirt of tentacles that she can move at will, and her pirate hat gets a gold trim and becomes jewel-encrusted so that it’s both pirate hat and crown (maybe a similar change happens to her boots), and her shell and her eyes are glowing during the whole transformation.

This song is so much better then the one from descendants

look at this thing?!!!!! its not even fitted for him! the pants look fine but the jacket?! why does it look 3x bigger than it should be on him?! i feel like they just found a gold suit jacket and put it on him, and said “that looks fine as is” and it doesn’t!!!!!!!!!!!!!!!!!!! its not fitted to him and its honestly an ugly shade of gold like GAH

he had a maroon jacket in D1 and it looked so much better on him!!!

I wrote a short fic on Google Docs from the perspective of Roger Radcliffe from One Hundred and One Dalmatians ,

[tw for mention of animal death!! (bc this is the revenge au and the villains all get what they wanted in this timeline)]

The girl Abigail (Roger and Anita’s daughter) who’s mentioned in this fic is an OC of @thebubbleteas !

Mal: Well, I guess you could say I’ve fallen for you.

Ben: You just fell down seven flights of stairs, how are you even alive?