Daydreamtober day 19: Nature. A lot of the headcanons I saw relating to this had to do with Stephen not ‘getting along’ with nature, and this went against every thought I had of the man and his plants. So, instead, we’re emphasizing his ultimate introvert(ism). 💛

Recent news broke Benedict Cumberbatch will return as Doctor Strange in the Spider-Man: Far From Home sequel as a mentor to Peter Parker following the death of Tony Stark in Avengers: Endgame. Considering how central Doctor Strange seems to be to the Marvel Cinematic Universe going forward, with his upcoming Doctor Strange in the Multiverse of Madness having ties to both WandaVision and Loki, he’s looking in many ways like the new “Tony Stark.” However, that might just prove fatal for the Master of the Mystic Arts.

Right now, Doctor Strange looks the most likely out of all of the established heroes to take on a leadership position. With Tony and Natasha Romanoff/Black Widow dead, Steve Rogers/Captain America and Thor absent, Clint Barton/Hawkeye prioritizing his family and T'Challa/Black Panther preoccupied with leading a nation, Doctor Strange appears to be the most capable to lead the next major MCU team. He has the power, ability, resiliency and brains to do so. Still, Doctor Strange’s fitness to lead goes beyond just these qualifications.

Doctor Strange’s relationship to WandaVision, Loki and now Spider-Man 3 show Marvel Studios wants to have him be everywhere. Because of Doctor Strange’s growing presence in the MCU, Marvel will most likely utilize his character to the same extent it did with Stark, and it’s a near certainty he’ll be massively important to whatever superteam shows up next, especially considering his history with such groups as the Illuminati in the comics. Doctor Strange’s skill with magic will also certainly help him deal with a particularly weird time in the MCU’s history in which Marvel Studios must find a way to introduce a new big bad as well as the previously absent characters once owned by Fox.

RELATED:MCU Theory: Electro’s Origin Will Have Ties To Tony Stark

All of these factors indicate Doctor Strange will take on a role somewhat similar to Iron Man for the MCU as a whole. However, if this does indeed happen, Doctor Strange could very well meet a similar fate. Iron Man’s death was pivotal for passing the MCU onto the next generation, and Doctor Strange’s death could very well end up serving the same purpose. As an incredibly in-demand actor, Cumberbatch seems – like Robert Downey Jr. – unlikely to stick around the MCU forever, meaning he’ll need to go eventually. As such, the most fitting ending for him might just end up being one in which he sacrifices himself for the greater good.

Directed by Sam Raimi, Doctor Strange in the Multiverse of Madness stars Benedict Cumberbatch, Chiwetel Ejiofor and Elizabeth Olsen. The film is currently scheduled to hit theaters on March 25, 2022.

KEEP READING: The MCU’s Spider-Man 3 NEEDS To Give The Andrew Garfield Movies Closure

Song of the night.

Stephen: THERE IS AN IMPOSTOR BETWEEN US!

Carol: *LIGHTS UP IN ENERGY*

Rocket: IT’S ME! IT’S ME! MUHAHAHA

Quill: SHUT UP ROCKET WE KNOW IT’S NOT YOU!

Thor: WHOEVER IT IS REVEAL YOURSELF!

Stephen: What is it Wong?

Wong: There are two Drax.

I’m not screaming, you are!

I’m so fucking happy about this.

This is adorable! Best PSA ever.

Summary: Y/N takes Nightmare’s deal to create a new reality, one where they could have normal lives and everybody lived.

Alternate Ending to Whispers in the Dark

“Yes, I could bring your father back from the dead,” Nightmare says. “Hell, I could make it so he never died in the first place. I could take you back, back to before everything with Thanos happened. Think about it, you and Strange would be alive and happy. You could be one big happy family. Your little sister, what’s her name— Morgan— could grow up with a father.”

“I get his body,” Nightmare says,pointing to Stephen. “What? You didn’t think I would do it out of the kindness of my heart, do you?”

“You should do it,” Stephen says, walking up to her.

“What? No, I can’t! You would be possessed by this asshole for eternity, you dumbass!”

“I would be with you,” Stephen says. “Think, none of this would have happened.”

“Okay… Let’s do it.” Y/N looks up at the creature. “Nightmare, I accept your terms.”

She barely blinked, and she was back in the sanctum. It was eerily quiet. She had gotten used to the noise from the kids, it was anxiety inducing. She wondered if Stephen was even there.

Her question was answered when he walked into the room, smiling. “Good morning beautiful,” he says. “Are you excited?”

“Our wedding day, don’t tell me you forgot?” Stephen chuckles.

She blinked. “Stephen, what day is it?”

“And the year?” He looks at her like she’s crazy.

Imagine: Trying to put a few Halloween decorations in the New York Sanctum.

Walking with a thick volume with intentions on returning it, you stopped in your tracks.

“What?” You had stopped by a side table. Tilting your head, you questioned yourself.

Didn’t I put a glow in the dark pumpkin there? Was it yesterday or the day before?

You made your way to the library at a faster pace.

If Strange threw it out or something…

Already suspicious and finding that another Halloween decoration was missing from a spot on the wall, you walked into the library. You weren’t one for confrontation, but taking down decorations was not okay.

Wong sat quietly at a table. A book laid in front of him and a pumpkin.

You let out a small laugh.

stephen: *wakes up to this every morning*

Something happened after the events of Ragnarok that send Loki and Thor back through time, with the help of Doctor Stephen Strange. Right at the events of… Thor’s car crash? Everything’s the same, even who they were, except that they remember their futures as if it were the past. Thor wants to find a way back home. Loki wonders if there was a reason they were sent to that specific time. Doctor Strange says that there’s one thing that they can change. Darcy Lewis’s future.

It was just after Thor and Loki pulled apart from their embrace that Stephen Strange decided to open a portal into Thor’s bed chambers. Asgard was gone, the brothers had made up, and there were plenty wounded. Of course, some things you can’t prevent or change for the sake of the timeline. But there was one thing that he knew needed to be changed. For the sake of the entire universe.

“I need your help,” he said, taking a deep breath. His heart raced, and he had just enough time to take in the warm, brown room before adding on: “I hope to whatever God there is that you grabbed the Tesseract.”

Loki arched a slender brow at the wizard. “Help? With what, exactly?” Stephen noticed how he dodged the subject of the Tesseract, mentally tucking that information away as Loki kept talking. “We destroyed Asgard and pushed along Ragnarok—”

“That’s just it!” Stephen snapped at him. Loki closed his mouth. Thor hadn’t said anything, just watched, which the sorcerer was grateful for; he wasn’t sure he had the patience to repeat himself. “Ragnarok wasn’t supposed to happen, yet. Because of mistakes made in 2011, half the universe will die.”

Ok, this is so damn sad. So, Peter realized in FFH that giving away the glasses to Quentin wasn’t the smartest idea but, at the same time, he knows the next Iron Man would have never done that, which means that EDITH is not made for him (at least in his mind). It takes him longer than he’d like to admit to realize that the only person Tony trusted with his life the exact same moment they meet him is Dr Strange.

Which means that he can entrust Tony’s control to Stephen Strange. Because, you know, Tony trusted him, and Peter trusts him too (way more than Tony used to). Stephen doesn’t want to. Let’s say that this is a universe where not only he fell for Tony, but where he has a good relationship with Morgan and, for this reason, Pepper can’t stand him considering him responsible for Tony’s death (just because I’m salty at Pepper 24/7 and I love the idea of Morgan being a little ray of sunshine in everyone’s lives. But when Peter tells him what happened in Europe, Stephen decides it’s for the better.

What Peter didn’t tell him is that he can basically use the glasses to control everything Tony created and that the AI inside of them is like a sort of Tony. Stephen is curious, he might not seem like this but he needs to know and he’s only willing to know more about those glasses so he decides to wear them. And he’s extremely surprised when the first voice he hears is Tony’s telling him that the kid would really trust whoever has a nice goatee.

Follows sleepless nights of astral projected Stephen and AI Tony speaking about everything and nothing until it’s time for the Sorcerer Supreme to be a productive human being once again.

Now, that’s a little headcanon. For the more canonical version, let’s just say that I'd like to see this, but as I mentioned yesterday, this would put Stephen in a focal position in the Spiderman movie, a position which I highly doubt he will be in. (To explain it better, I expect Stephen to have the same screentime Tony had in Homecoming instead of the one Happy had in Far From Home). That said, it would totally be excruciating for both Stephen and Peter to have to make that conversation about Tony and, most importantly for Stephen to somehow have the opportunity to speak again with Tony.

For once, I’m kinda happy RDJ won’t be, not even as voice actor, in this movie because my heart wouldn’t be able to take it. 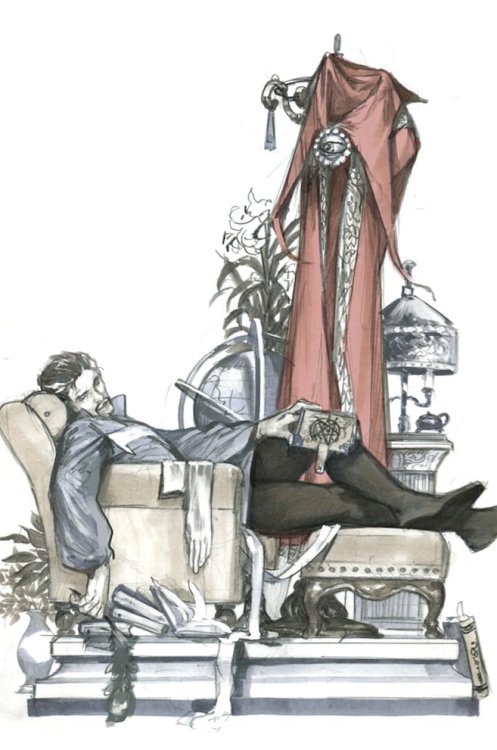 Stephen: It’s six in the morning?

Hi! Thanks for sharing, but unfortunately with my current schedule I will not be able to participate this time around.

But to any of my followers, this sounds like a great opportunity! 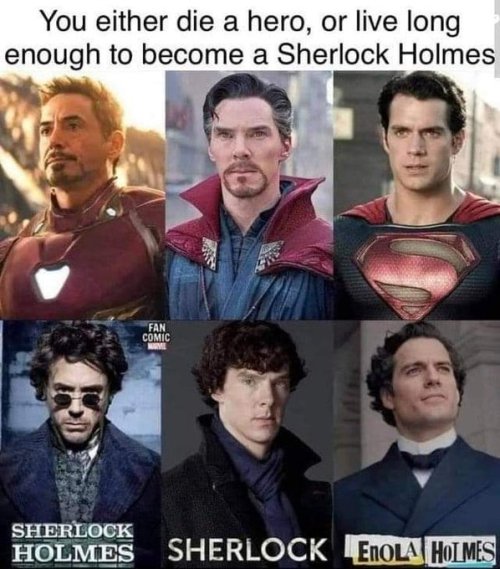 Person on airplane: Help! Help!!! Is anyone here a doctor???

Tony: *stands and rushes over, clearing his throat*

Bruce: Tony… let me handle this

Bruce: The reason why half-lives are a bitch is because they decrease exponentially meaning they will never truly go away

Stephen, kneeling down and assessing the patient: we can have a PhD flex-off later

I think it’s a matter of miraculous incidents being a better way of disregarding realism - at least as defined in shared superhero narratives - than “they trained really hard/bought what they needed”. And even then you’ve still got Batman and Doctor Strange and the like.